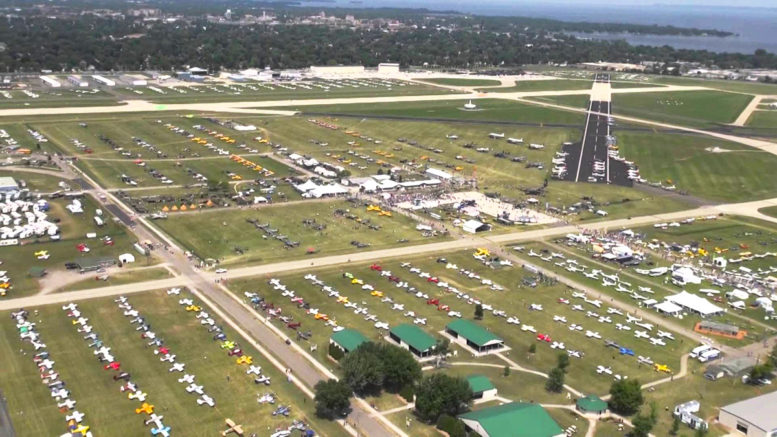 There isn’t any doubt that helicopters are very attractive to many homebuilders who are licensed fixed-wing pilots, as well as to non-pilots. To them, the helicopter means freedom of airports, freedom of tiedown, freedom of storage, and freedom of altitude.

Certified helicopter pilots, on the other hand, know that this isn’t necessarily so. The helicopter dream started after World War Two when stories and news film of the new form of aircraft started being shown in the theaters and on the infant TV screen. 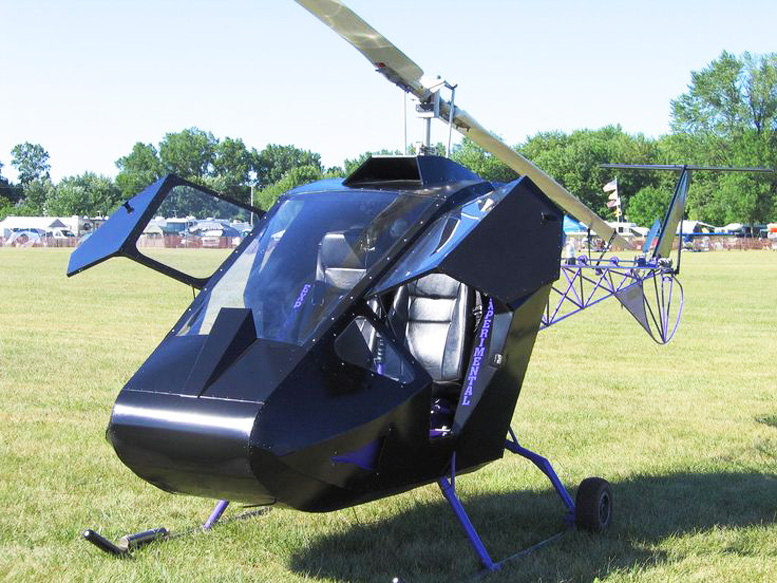 This is a little known picture from more recent times of Safari kit helicopters experimenting with new sleek design cabins, yet looks very similar to the almost 30 year old Cobra Helicopters ideas – which I have always admired!

After the Korean conflict, the desire to own your own “chopper” became even more intense. Vietnam was the first war fought almost entirely by the Army with helicopters as their main line of attack and transportation.

While the helicopter was progressing as an essential military vehicle, the private helicopter was doing pretty well in General Aviation. The Bell 47 with the familiar bubble canopy and open-air tail structure was seen spraying crops and traveling occasionally over cities with traffic reporters or police aboard. 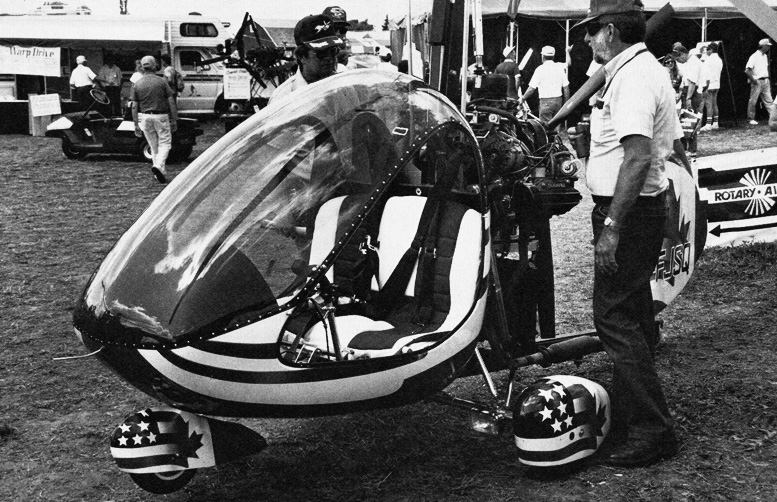 Enstrom, Hiller, Brantley, and Hughes all entered the light helicopter business and Sikorsky became heavily involved with heavy-duty aircraft for the military, as well as for well-heeled civilians. One lone man carried the torch for homebuilt helicopters. B.J. Schramm from Phoenix, Arizona, designed a little single-place Scorpion helicopter which was powered with an outboard motor.

It flew quite well, and the Rotorway firm was born. Throughout the next 20 years, the little single-place evolved into the very beautiful two-place Executive. Still, the homebuilt helicopter was not a real option for the man on the street. 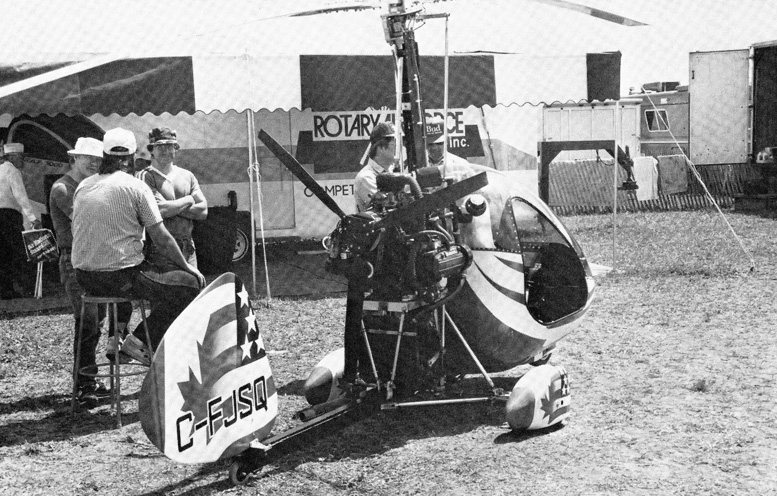 Other firms attempted to market homebuilt helicopters with very limited success. The best one was the Helicom which had an excellent drive system, but it too fell onto hard times and was finally abandoned.

To satisfy the average man’s love of helicopter flight, many firms ran ads featuring various methods of getting airborne, how many inches they never said. Pulse Jets were placed on the rotor tips, big model airplane engines were attached to the rotors, pressure jets were built into the rotor blades. 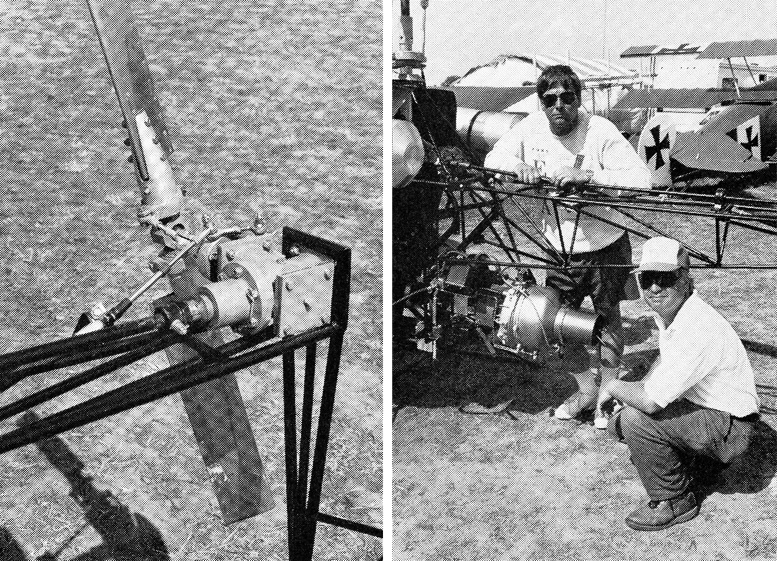 LEFT: The tail rotor on the turbine helicopter is also from the Helicom. Current owners of Cobra purchased the rights to the Helicom parts.
RIGHT: The engine man and the helicopter man pose with their creation, a real first, a true turbine homebuilt helicopter.

They were all very successful . . . not as helicopters but as a means of transportation — transporting the money from the poor purchaser to the company hawking the helicopter dream. Unfortunately for reputable helicopter firms, there have always been scam artists using people’s love of helicopters to steal their money from them.

While the helicopter remained the dream of many, others were getting airborne with whirling wings attached to their gyroplanes. While a gyrocopter is not really a helicopter, for many it was close enough. Hundreds of Benson Gyrocopters were sold by Igor Benson and many others marketing copies of his very simple design. 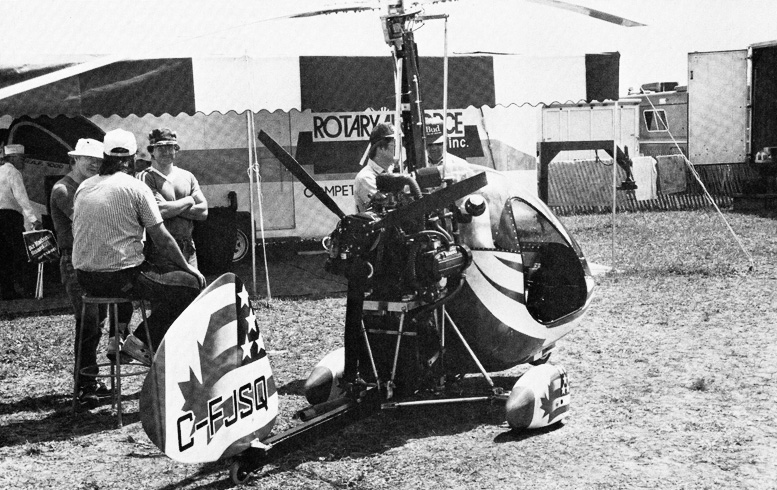 The gyroplane movement was off and running. The gyroplane business was small but stable from the late 1960s to the early 1980s, when it really took off because of the ultralight movement. Gyroplanes were everywhere.

Ken Brock was one of those who adapted the Benson design and made it a very reliable, safe-flying machine. Ken performed at airshows all over the country in his black gyrocopter. In the mid-1980s, Air Command made its debut and flooded the market with many different models. 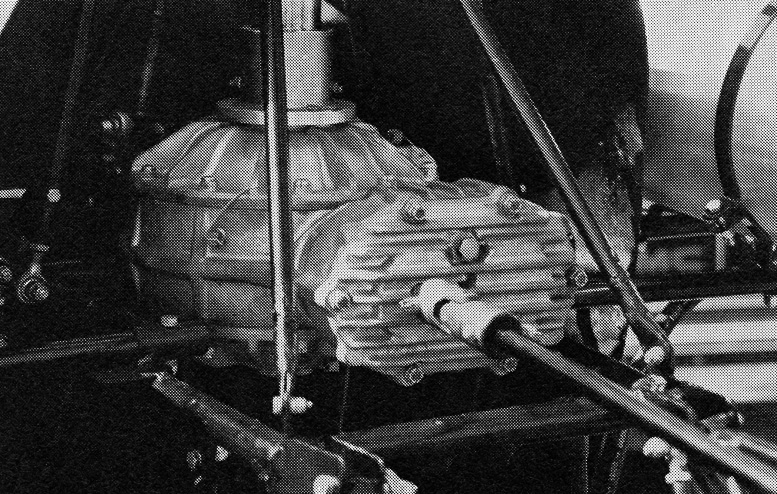 The output shaft of the turbine is directly attached to the transmission of the helicopter.

EDITOR: Here is a fine example of peoples innovation when some specialized parts are not available. Back in 1990, the Cobra helicopter team used a generic speedway “Quick Change” rear end, in this case mounted on its side.

The turbine drives the gearbox from the front with the tail rotor drive shaft exiting the “quick change” drive section. Often you will find vendors offering a differential oil pump that fits in this exact position, thus making it ready for the shaft without further modification.

What isn’t discussed or seen is is the lubrication was adequate for the top bearing or if it needed an oil cooler. This is very “similar” to both the Jet Exec and the new Mosquito Swift.

You could purchase tandem, side-by-side and single-place versions. A large national advertising campaign fueled the sales. Hard-selling techniques were undertaken at all airshows and Air Command, under Dennis Fetters, was a successful company.

Things don’t always remain the same and the start of the new decade brought troubles to many of the copter manufacturers, including Air Command and Rotorway. Both were sold, either out of bankruptcy or to avoid bankruptcy. 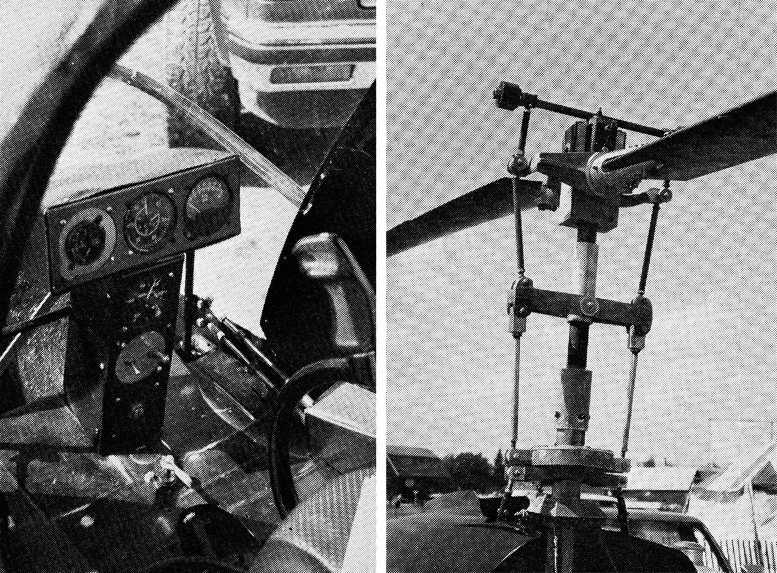 LEFT: The cockpit features a conventional helicopter control and panel layout.
RIGHT: The rotor head is the one from the Helicom helicopter of several decades ago which was very dependable and durable.

Dennis sold Air Command to a group in Florida which is still marketing the same machines, and Rotorway was sold, as well. At this time, both old concerns under new ownership are still in business. Rotorway has ample cash reserves for product development.

At Oshkosh, the gyrocopters were in the air for many hours operating from the ultralight strip. The RAF group, down from Canada, had new Subaru engines in-stalled in place of the two-strokes that they had used last year.

LEFT: The control head of the Revolution is said to be very simple to build and affords the pilot great ability for precise maneuvers. It was first shown last year by Fetters, installed in a small Argentinean helicopter.
RIGHT: The turbine is a surplus APU engine from a jetliner costing about $20,000 in package lots.

What a difference the more powerful engines made. Their heavy, enclosed-cockpit machines with instruments and pre-rotators were smoking the area with speeds that appeared to be pushing 75 to 85 mph.

The sound was great. This was the most advanced gyroplane that I witnessed at Oshkosh. Dennis Fetters was back with a new helicopter powered with a Rotax engine and swinging blades controlled with a new revolutionary rotor head.

This was the same unit that you saw Dennis fly last year at Oshkosh. The Argentines don’t appear to be in the picture any longer, as Dennis is marketing the bird under his own company, Revolution Helicopters.

The helicopter wasn’t quite ready to fly yet, but Dennis states that it will be in the air at the 1992 Sun ‘n Fun. 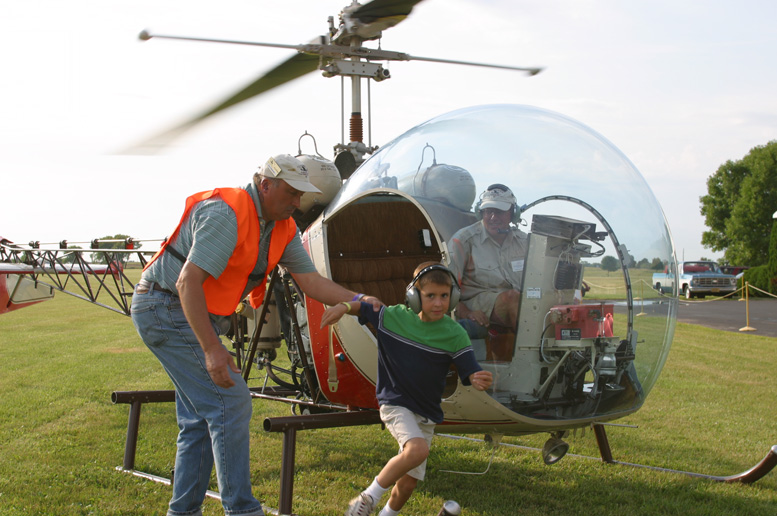 Bell 47 helicopter joy-rides are fun for all ages!

This year, the Predator Helicopter had a turbine engine installed. You heard right, a turbine engine. Company spokesmen told us that the unit is from an APU and the transmission of the helicopter is hooked up directly to the output shaft of the 90 hp turbine.

This looks interesting, as the APU engines are pretty well-engineered and are starting to show up on the surplus market after they accumulate a certain number of hours. Problem: If they aren’t considered safe to run generators, how are they safe to fly people?

EDITOR: We are not sure where this comment is born from – maybe that they are becoming available on the market. Truth be told, recent years have proven a correctly set-up turbine will give you many of the safest flying hours….at a cost! Consider initial outlay – though reduced down-time and maintenance, but increased fuel usage!

I wasn’t told that they had been overhauled. If you are in the market for this type of powerplant, though, I would sure ask a whole lot of questions before I forked over the 20,000 plus bucks they were asking for them.

Again we were told that the helicopter had been flown and was going to be detailed out for its first official debut at Sun ‘n Fun this year. Finish wise, the helicopter is currently doing a Model T impression, basic black – but you are welcome to be creative with color! 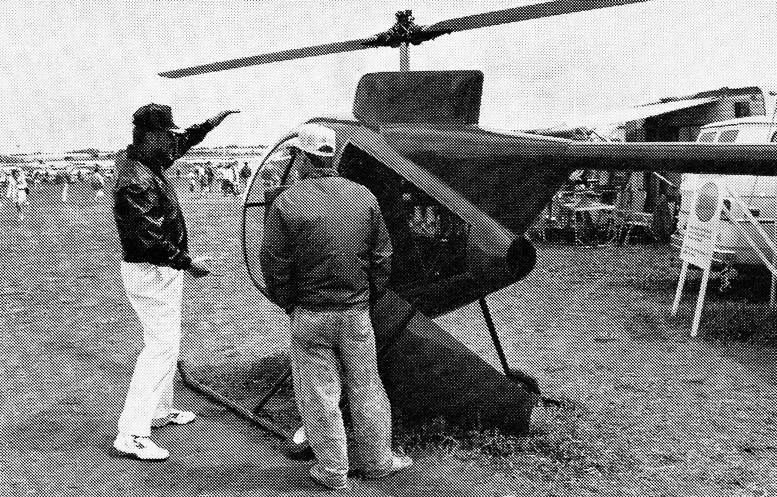 Dennis Fetters is showing a prospective customer the fine points on his new Revolution helicopter that he plans to be delivering in about six months.

Rotorway was also there, displaying their great new Exec 90, which is the redesign of the old Rotorway Executive before the company sold out. I test-flew this machine last January and was impressed with the aircraft and with the new owner of the company. 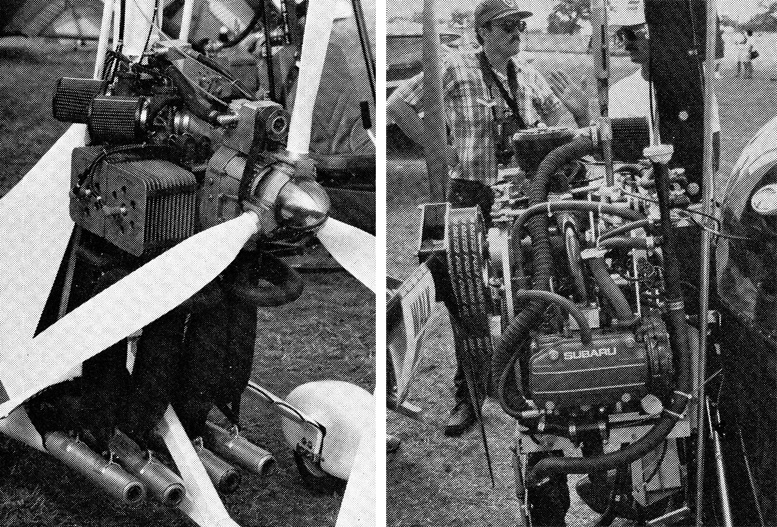 LEFT: There were many new faces and new products in the rotary wing camp, including this new Air Command with an Arrow engine installed.
RIGHT: There were several aircraft that have been retrofitted with Subaru engines. The little 90 hp, liquid-cooled engines are inexpensive and are noted for a very long life in their automobile counterpart.

For those of you who are not familiar with helicopter licensing, it is necessary to have a rotary wing certificate in order to carry passengers in a helicopter. You must also have a gyroplane certificate to carry a passenger in a two-place gyroplane.

Although some of the homebuilt rotary-wing craft we’ve mentioned can qualify as ultralights, they are very close to the line and none of the two-passenger versions are ultralights. Furthermore, unlicensed pilots can not fly them. 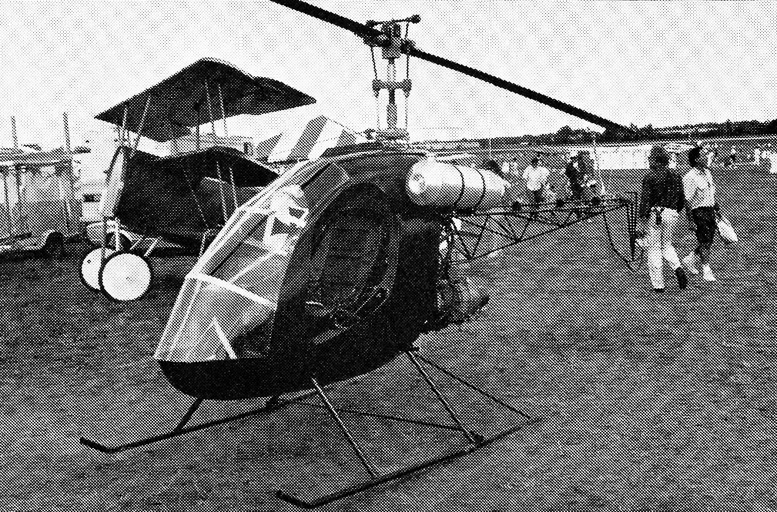 Cobra Helicopters was there showing off the hit of the rotorcraft area: a real turbine engine which had been installed and flown successfully.

EDITOR: If you can help us out with ANY more information, pictures, photos, drawing, article or plans on the Cobra Predator or Mustang, please contact us!

You can add the helicopter rating to your Private license or you can get a helicopter Private license. Either way, plan on spending quite a few bucks for the privilege. If you have purchased or plan to purchase a Rotorway, they have a unique owner training/check-out program. Ask them for details.

As we have said many times before, however, when you are dealing with small companies, “BUYER BEWARE!” 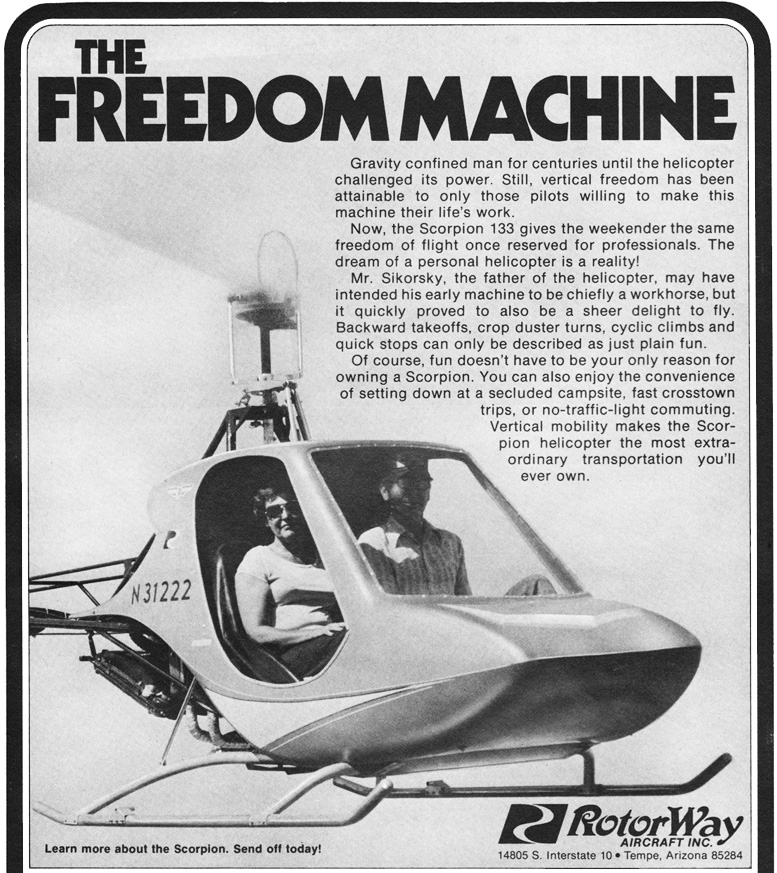 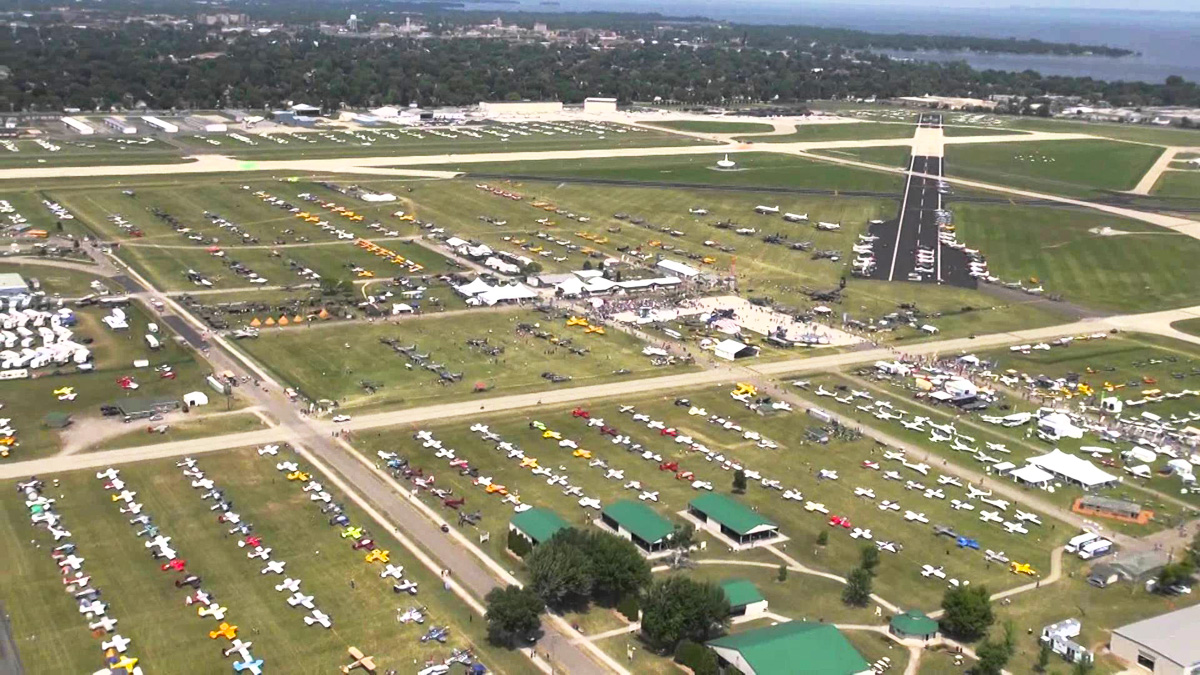