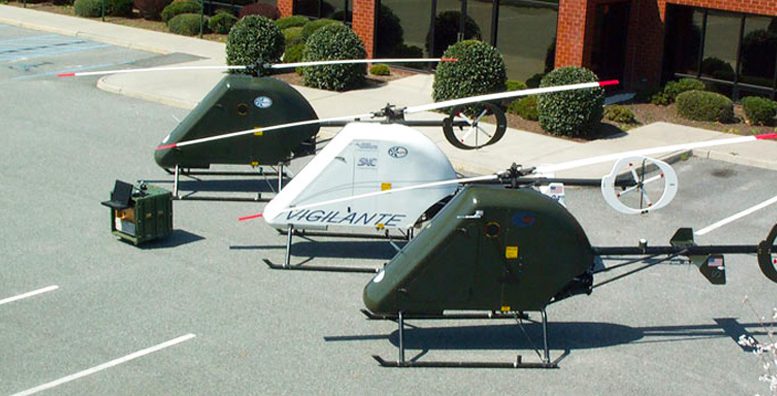 And why would someone do such a thing? To get themselves an affordable, easy to maintain, easy to fly unmanned helicopter – a UAV Drone! The Vigilante vertical take-off and landing unmanned air vehicle, or VTOL-UAV in US-mil-spk, is just such a helicopter. 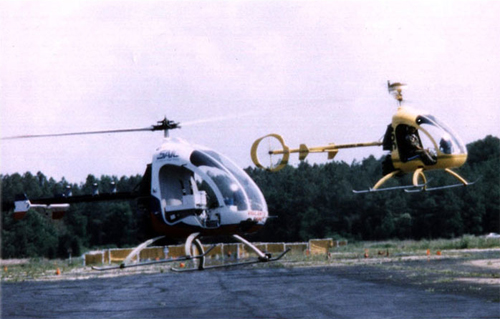 Unmanned Rotor Systems (URS of Newport News, VA) selected the American Sportscopter Ultrasport 496 helicopter kit as the basis for a VTOL-UAV platform. When combined with an Autonomous Flight Control System (AFCS) from Aerobotics Corp. (Gloucester, VA.), it serves as a generic “truck” on which UAV systems integrators hang their mission equipment.

331 Proof-of-Concept UAV: URS used a single seat Ultrasport 331 as the platform for a proof-of-concept vehicle on which the AFCS could be developed.

The UAV Drone aircraft used military surplus navigation sensors and custom-built computer hardware on which fuzzy logic adaptive control software was run. Actuators and sensors were piggy-backed on the Ultrasport controls, allowing an onboard pilot to fly while collecting flight data for use in training the AFCS.

Close cooperation with the FAA was required in order to have a man-rated aircraft, and yet fly it unmanned as required. The unmanned helo was initially flown by a ground-based Safety Pilot using a modified hobby helicopter radio.

His function was to act as a pilot instructor, guiding the “student” through the various skills needed for flight and taking control back as required. Two unmanned flight hours were accumulated prior to a radio-frequency-interference-induced servo failure causing a crash. This and other lessons helped in the design of a second generation vehicle: the Vigilante 496-OPV. 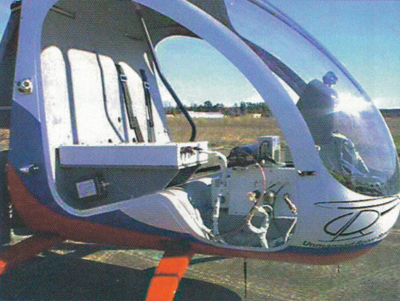 SAIC Vigilante: After an extensive survey of UAVs, SAIC selected the URS helicopter as their platform for UAV missions requiring VTOL capability. SAIC has experience with many fixed wing UAVs including Global Hawk and Darkstar, and was impressed by the proven cost and performance of the Ultrasport.

Presenting to the military required a demonstrator aircraft being designed, built, and flown manned in just two months, with the first unmanned flight following one month later. The Vigilante 496-OPV is an Optionally Piloted Vehicle, similar in concept to the 331-based proof of concept vehicle, and is essentially a stock Ultrasport 496 with 100 pounds of bolt-on fly-by-wire flight controls.

A safety pilot is employed in the same fashion as on the 331 UAV. The mission payload is a forward looking infrared (FLIR) sensor mounted on the nose, and imagery is transmitted to the ground control station. 67 total hours of flight test have been accomplished to date (Aug ’98), 56 hours while unmanned.

Test flight footage of the UAV helicopter firng a missile.

We now see more and more unmanned drone aircraft undertaking the more dangerous and difficult tasks of war. They also serve to save on military spending – how so? Why send a 60 million dollar F-16/F-18 fighter or F-35 strike aircraft at 24,000 an hour – when you can send in a drone at less than one percent the cost? (without endangering a pilot in the process)

In December ’97 the Navy, having an eye toward fielding a VTOL UAV system aboard it’s ships within the next few years, awarded contracts for demonstrations of three VTOL UAV systems. Of the many companies who proposed systems, Bell Helicopter’s Eagle Eye tiltrotor.

Bombardier’s Guardian co-axial helicopter, and SAIC’s Vigilante helicopter were chosen to demonstrate their capabilities. The Guardian and the Eagle Eye are high performance aircraft, developed over many years for millions of dollars. The Vigilante represents a low-cost option with performance comparable to or exceeding that of the other demonstrators. 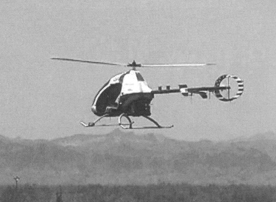 Another UAV using the Ultrasport 496 dynamic system and having a strictly unmanned fuselage is being developed by SA1C under the name of Vigilante 500-UAV. This aircraft retains all the benefits of the 496-OPV, and incorporates 3rd generation design features.

Performance will be enhanced by incoiporating a fuel-injected version of the Hirth F-30 engine that is optimized for helicopter use. The flight control hardware will be further refined to increase commonality with that used on currently fielded UAVs. 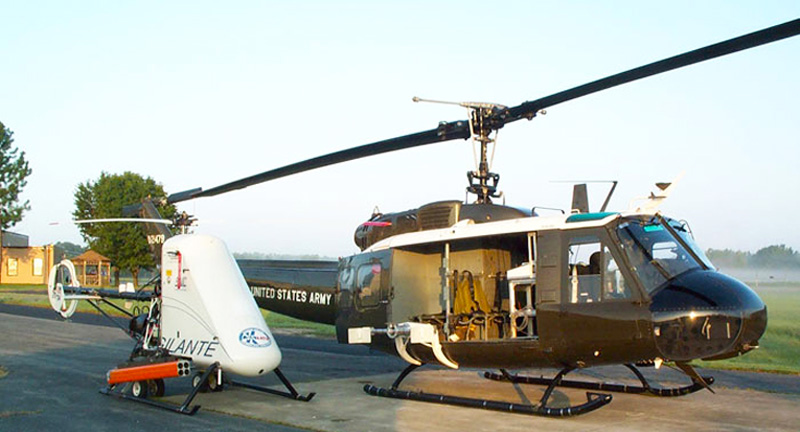 The UAV Drone flight control software will be upgraded to provide a broader range of maneuverability required for shipboard landings in gusty conditions. The high level of activity surrounding these development programs prevented American Sportscopter from attending the Sun-N-Fun and Oshkosh air shows this year.

However, the data generated during the NASA and US Navy UAV Drone testing are providing URS and ASI engineers with more knowledge on how to build, operate, maintain, and improve the $49,000 Ultrasport 496 kit helicopter, a design that recently won the Outstanding New Design award at the 1998 Popular Rotorcraft Association fly-in at Mentone, IN.