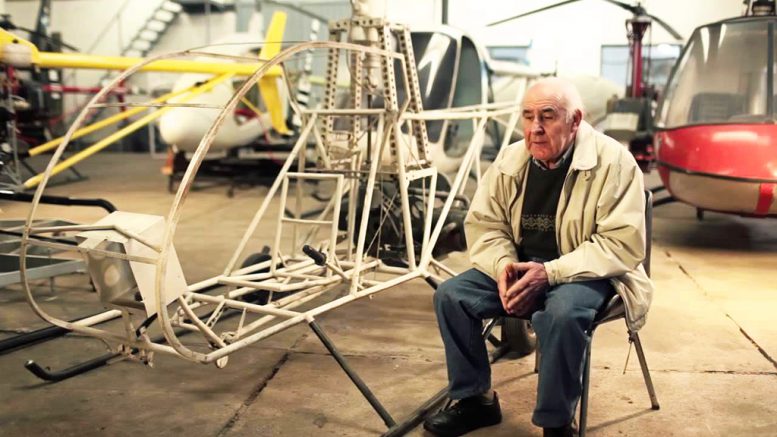 Augusto Ulderico Cicaré was born on May 25th of 1937, in the town of Polvaredas, Saladillo, province of Buenos Aires, Argentina. 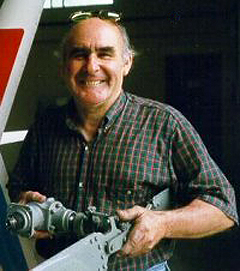 When Augusto Cicare was 11 year old, studying 5th grade of the primary school, he built his first four-stroke engine and powered a clothes-washer with it. At the same time Augusto converted an automobile engine for the employment of packed gas as fuel instead of naphtha. Augusto was also devoted to the construction of all the tools for his workshop.

At the age of 12 years, Cicaré left the primary school and abandoned his studies forever, but not his capacity to invent. This took him, when he was 15 year-old, to design a 500 cm³ engine with the camshaft at the head and with a 4 speed gearbox.

It was destined to a motorcycle he was about to build, but the circumstances took him to sell the engine to a friend. It was installed in a Harley Davidson motorcycle, and with the money of this engine Augusto started to work on the first parts of what was his life-dream and passion, the helicopter. 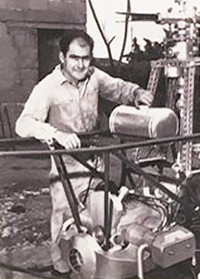 The young Augusto continued his mechanical education via the “On the Job Training” method. As a young boy, Mr. Cicare would assist the local long distance truck drivers in his village by helping maintain their equipment. The truckers would reward the young Augusto with all sorts of used parts they gathered for him during their road trips. The young Augusto also began to design and built the machine tools needed to create his innovations such as the motor cycle engine, automatic gear boxes and diesel engines.

At 17 years old, Cicare began to develop a fascination for aviation, perhaps by his trucker friends giving him an appetite via aviation magazines. It took the young Augusto only six years to go from simple fascination of flight to designing, building and piloting his first helicopter.

In 1958, Augusto accomplished his dearest dream by building and flying his first helicopter, the CICARE CH-1. This became the first aircraft of this type to be developed and built in South America.

The Cicare CH-1 is a single-seat, single-engine, with coaxial counter-rotating rotors with two blades each. The cyclic command acts on the tilt of the structure that upholds the rotors. The frame of the aircraft is built on steel tubing. The four strokes, four opposed cylinders engine was also designed by Augusto Cicare. 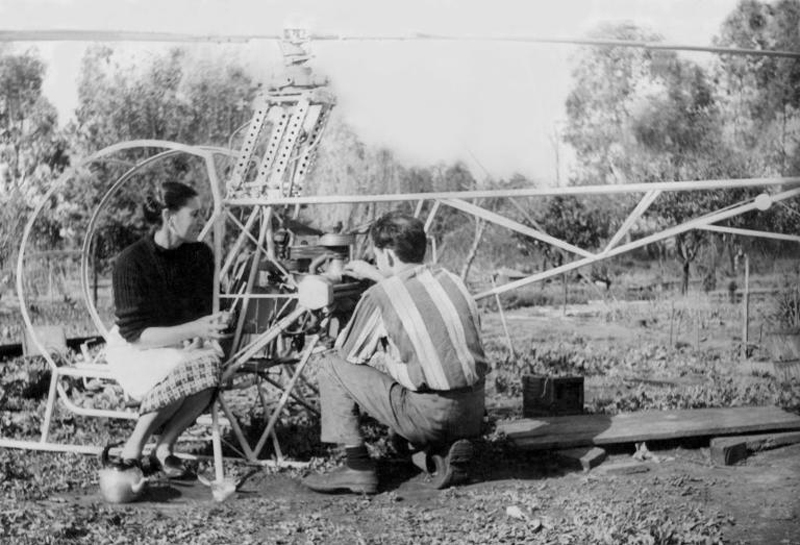 Handout picture released by the Cicare family taken in 1958 in Polvaredas, shows Argentine helicopter designer and builder Augusto Cicare (R) working on the CH-1, his first hand-made helicopter, next to his mother | © Familia Cicare/AFP | Ho

The Cicare CH-1 helicopter is the first helicopter designed and built in Latin America. Being the first aircraft of this type ever developed and built in South America, neither the tools nor the materials employed to construct it were for aeronautical uses. 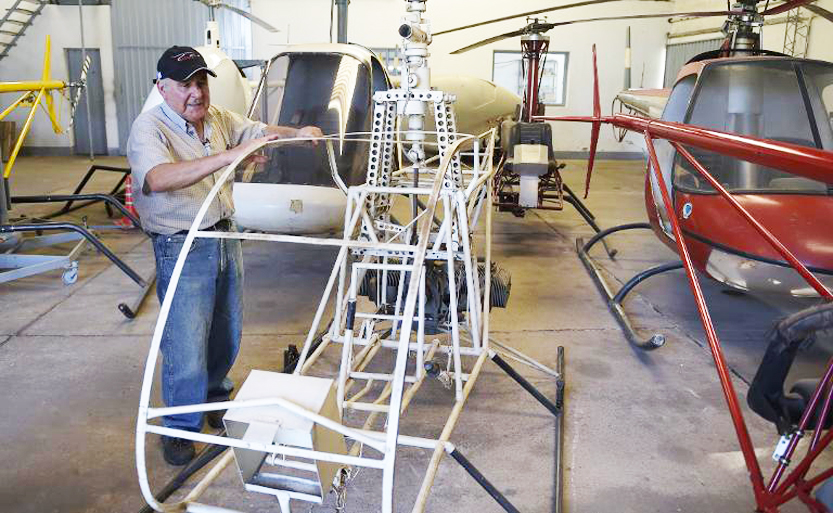 Augusto Cicare took it upon himself to not only design his own helicopters (and learn to fly them), but also to design the tools in his workshop specifically for this purpose. 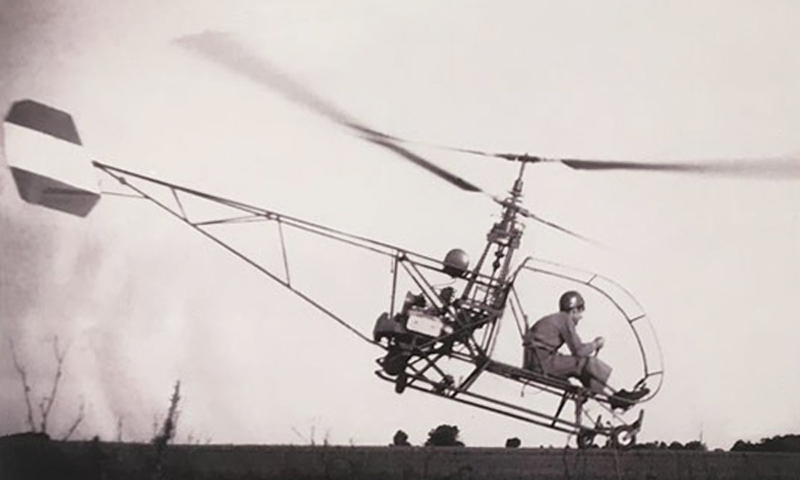 In these early days (late 1950s, early 60s), Mr. Cicare was not aware of the dynamics of rotary wing flight dynamics such as gyroscopic procession (the need to apply the appropriate input 90 degrees in rotation before the desired reaction takes place in the rotor blade system).

Augusto Cicare learned this and many other helicopter aerodynamics principals via the trial and error method. However, once again, this lack of formal training by a talented and observant innovator caused the now 20-ish Agusto Cicare to devise new methods of accomplishing the same end result, but using considerable less components as was being used by others in their helicopter designs. 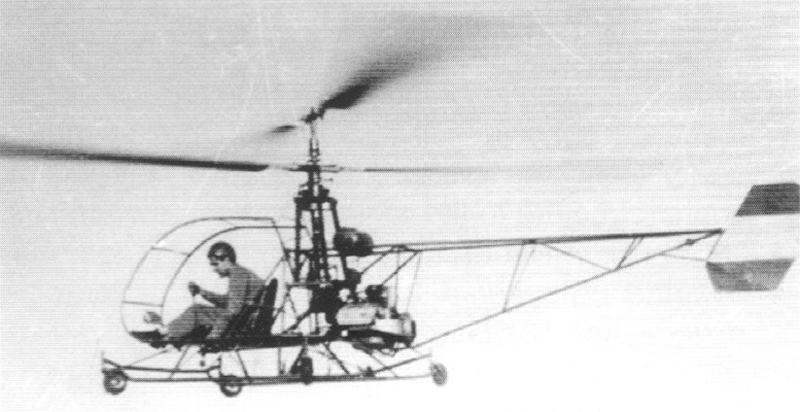 CICARE CH-2: It Is a two-seat conventional helicopter. The frame and the tall boom are made of steel tubes. The main transmission has a belts stage and also a 90° gear stage; the driving to the tail rotor is made through a cardan joint. The main rotor has three blades and the commands are hydraulically controlled. 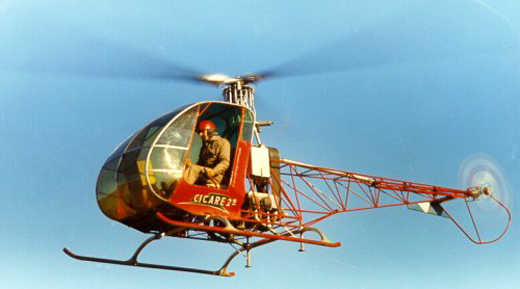 This was Augusto’s second helicopter design. For this enterprise Mr. Cicare worked with the support firstly of all his local neighbors at Polvaredas, and secondly then secondly with the support of the National Argentinean Air Force.

This helicopter design was of the more traditional main rotor and anti-torque tail rotor blades. Forever looking for a better solution, his initial swash control system looked quite complex. It would be another 30 years till he perfected his through shaft swashplate system. 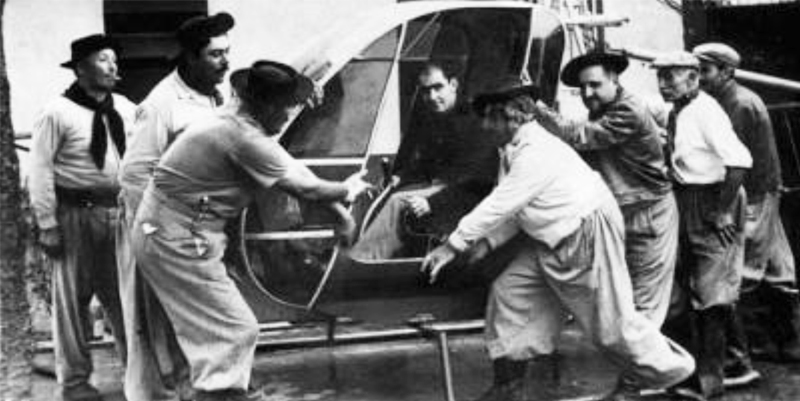 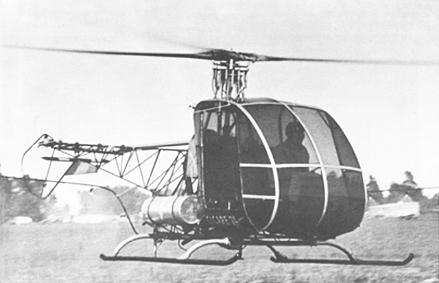 It sported what looked like an opposed flat four engine such as an early Lycoming or Continental aircraft type power plant or even possibly a VW (VolksWagon) auto engine with the typical multi-V belt reduction drive – but in fact, was an engine of his own design! 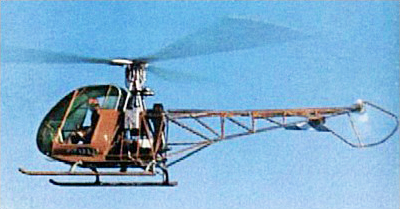 The complexity of the swash control system looks interesting to say the least! Just looking at it – I’m yet to figure it’s operation – (though it appears the two flat plates might be mounted on a gimbal bearing allowing the squeezing of the plates to provide appropriate tilt for the rotor disk), but knowing Augusto, it would be thoroughly tested and designed to fulfil its purpose. 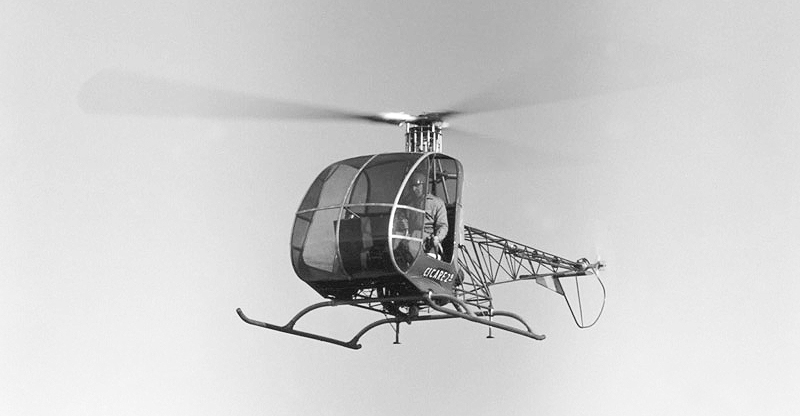 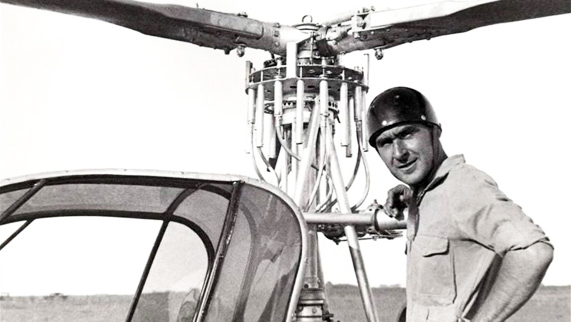 While you can see the main rotor blade lead-lag pitch links in the images, it appears there are no dampeners with the CH2 relying on the flexibility of the blades alone. There also does not seem to be any flapping hinge in this model, though actual details are unknown.

The tail rotor system seems to be of typical design – standard amongst “most” helicopter designs to this day.

Cicare created an airplane flight simulator, the first one built in South America. The Argentinean Ministry of Education and Culture named Augusto as Technical Master.

On the same year the English publication Jane’s published an extensive article about all the realizations of this Argentinean helicopter manufacturer, while not a Sikorsky, his contributions to the evolution of the helicopter have been equally important to the continued technological advancements of rotary winged flight.

Around 1973, as a result of a contract with the Argentine Air Force and private investors, he designed and built the prototype of his third helicopter, the CICARE CH-3, He adapted a car engine to be used in this aircraft. Due to budget difficulties, the Air Force had to cancel this contract. The model was finally built thanks to his personal efforts. At the time, this prototype represented the most exceptional work in that field worldwide, due to the use of a four-blade rigid rotor, with the hub made of composites. This model also had an hydraulic system to assist the commands. 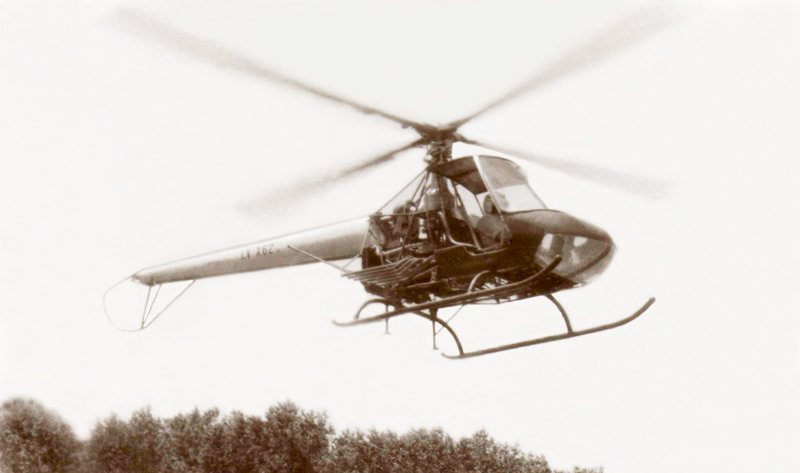 As a result of a contract with the Argentinean Air Force and private managers, Augusto designed and built the prototype of his third helicopter.

The Cicaré CH-3 Colibrí was the third helicopter that designed and constructed Argentine engineer Augusto Cicaré. Its design began in August 1973 and was completed in 1974. 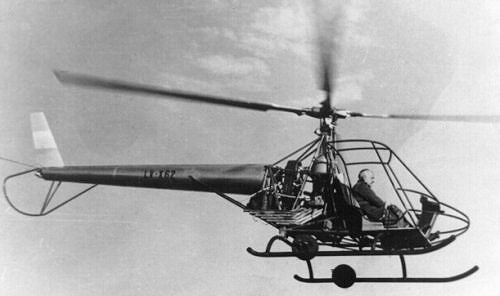 He adapted an automobile engine to be used in this helicopter along with typical v-belt reduction drive through a 90 degree gearbox. This allowed for a range of less expensive power options. 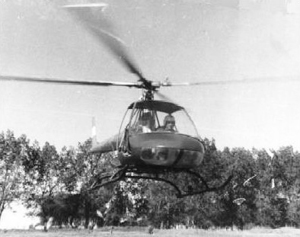 This helicopter began development by means of a contract with the Argentine Air Force with the objective of obtaining an aircraft useful for flight training and agricultural tasks.

He made his first flight in 1976. During 1975-1976 underwent profound modifications that resulted in a variant called C.K.1.

For economical reasons, the Air Force had to interrupt the contract and the Cicare CH-3 helicopter design was finished only with personal efforts. Here you can see Augusto test flying his own work, check out the multiple exhaust pipes! 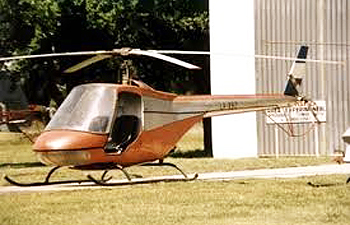 It is a bi/tri-seat helicopter, with the seats located side by side. It has a rigid type four-rotor rotor and rotor hub made of fiberglass reinforced plastics. The structure is made of steel tubes and aluminum sheets.

The engine comes from a car and was adapted to the helicopter by Cicaré.

His fourth helicopter model, the single-seat CICARE CH-4, appeared in 1982. It was built exclusively with argentine materials, including the 55 H.P. engine. This helicopter proved to have exceptional handling with respect to maneuverability and stability. The CICARE CH-4 in an ultra-light conventional helicopter. It’s the first one in this category, built with the same mechanical solutions as standard helicopter categories. The engine is a two-stroke, two opposed cylinder design, developed by Augusto Cicare by using a selection of motorcycle parts and his own machined parts. 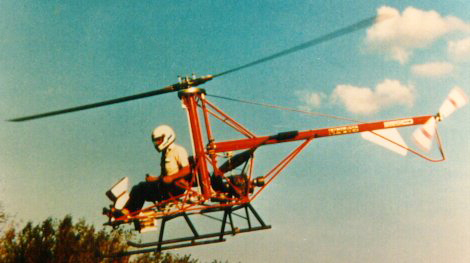 The Cicare CH-4 helicopter was one of the first ultralight helicopters available in the world (1980).

To reduce cost and reliance on foreign materials, this light personal helicopter was made using national materials, including the engine.

This helicopter proved to have excellent maneuverability and improved stability in hovering and all flight parameters.

This proof of concept design was to open the way for the CH-6 which then went on to become the CH-7 and CH-7 Kompress tandem two seater. 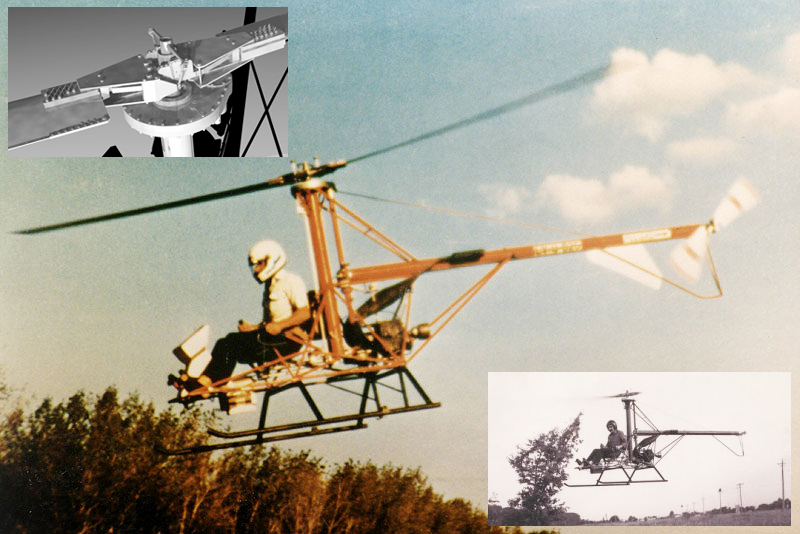 This particular helicopter has been sold by other companies under the names – “Lark” by Helicraft, “SkyLark” by Vortech and the “Furia” helicopter by Plans Delivery – Osvaldo Durana (Deceased). The Furia version homebuilt helicopter seems to be a commercialization of the original design with the addition of a publically available aircraft two-stroke engine with highly detailed construction and machining drawings.

If you are a skilled engineer, this one’s for you! If not…the cost of having the complex parts made would probably exceed the cost of a kit helicopter. Though flight performance is nothing short of excellent, it is extremely complex and the overhead gearbox noisy and complex.

VIDEO: The CH-4 Helicopter being used for flight training 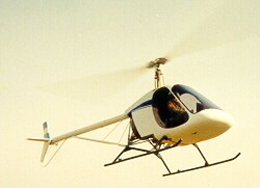 The Argentinean National Air Force signed another agreement with Mr Cicare to develop a helicopter primarily for domestic agricultural tasks, this helicopter was equipped with a Lycoming aircraft engine with a power of 150 HP.

Augusto designed and built a light helicopter with the capability of carrying out the required agricultural tasks, basically fumigation. Augusto named it CH-5. This robust helicopter propelled by an aircraft Lycoming engine has an airframe of steel tubes, with the blades and the cabin made of composite.

Thus evolved yet another original design by Augusto – the CICARE CH-5-AG. There is video footage of this helicopter flying around an airfield during a demonstartion. It had impressive performance and looked much like the layout of a Robinson R22 two seat helicopter. 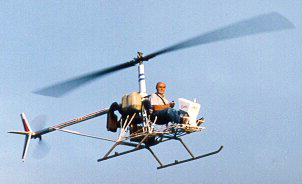 Parallel to the development of the CH-5 and with the objective of testing in flight some new systems and elements to be used in the CH-5 arose the single-seat mini-helicopter CH-6, with a 64 HP engine. Augusto patented the novel control system of this helicopter.

It was this alternative control system that revolutionised the kit built industry with it’s unrivalled natural stability and reduced centrifugal forces creating a lightness to the cyclic feel not to mention minimising drag by encasing the controls within the main rotor shaft. 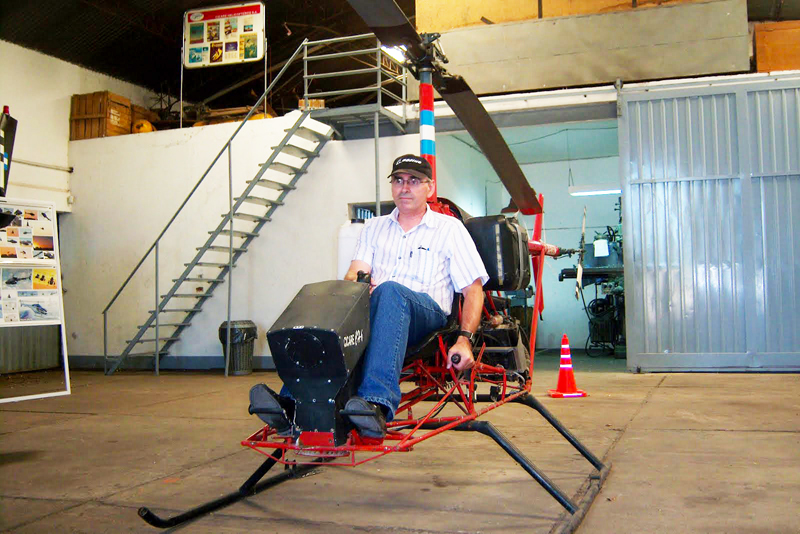 Labala Turbine GFL32 being tested on the Cicare helicopter CH-6T, this made this Helicopter truly one 100% made and designed in Argentina Argentina.

Mr Cicare’s CH-6 helicopter design was later successfully presented to the public at the Oshkosh Air Show and was a huge crowd pleaser. 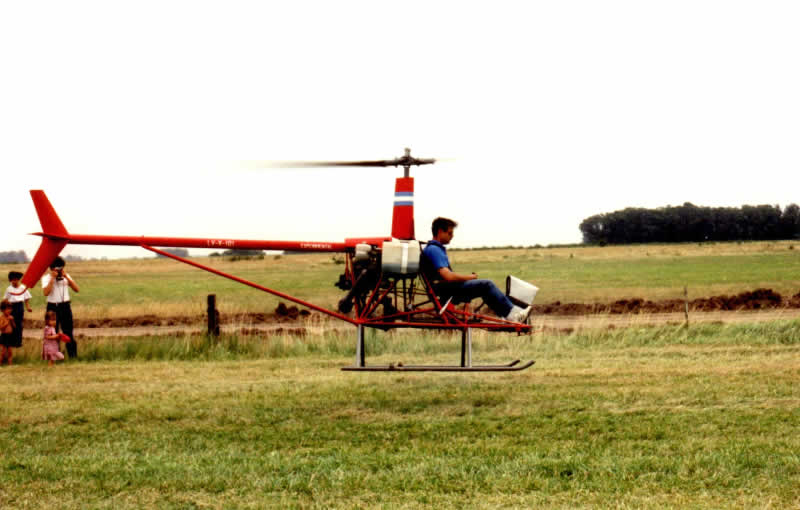 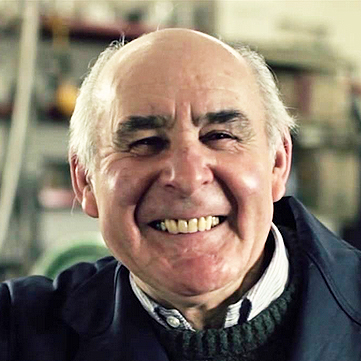