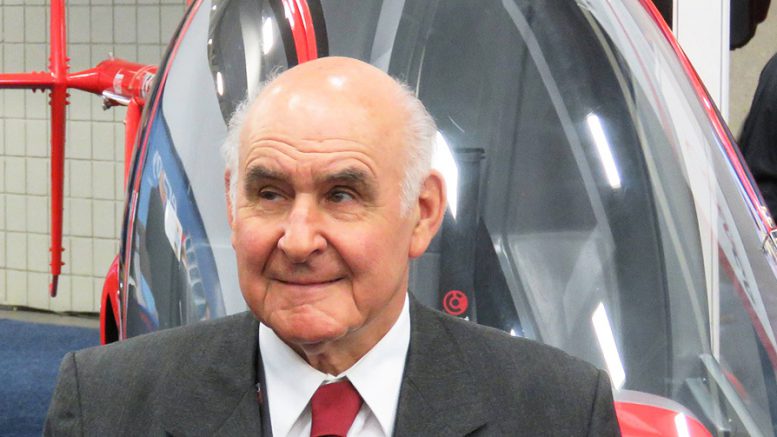 In 1973 Cicare built a two-stroke four-cylinder 60hp aviation engine. He received a contract from the Argentine Air Force and private sponsors to build the “Cicare III” helicopter, but the contract was later canceled. The “Cicare III” used more advanced technology than was common at that time because the hub – a rigid type – and the rotor blades were made of composites.

It would take ten more years before helicopter factories around the world would begin selling these types of materials. During the following years he was working on technical novelties such as changing “gas engines” to function as “diesel engines”, building oil pumps for race cars, injection rotor pumps for diesel engines and so on.

In 1982 he showed his light helicopter “CH-4”, for which he also built the engine. It weighed only 120 kg and handled easily. Immediately a pilot noted the absence of vibrations, incredible stability, and the smooth effective control movements. 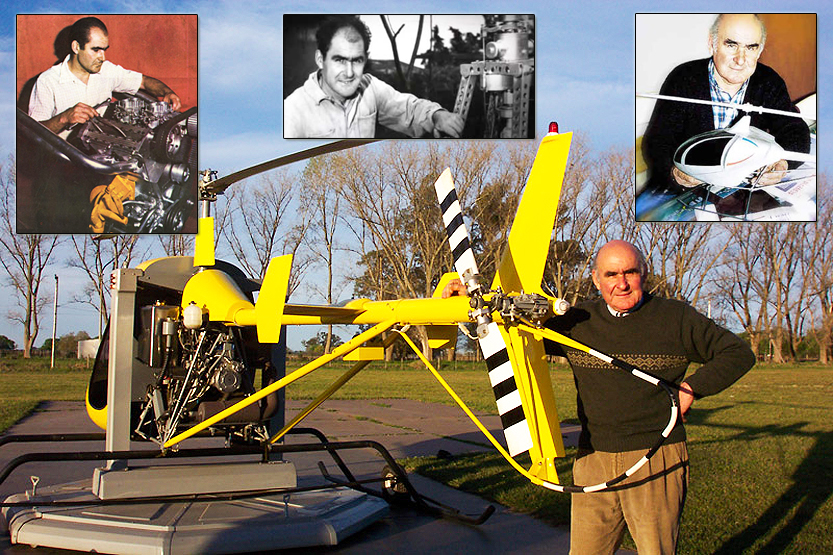 Augusto Cicare helicopters and his many life achievements

This prototype flew 200 hours and showed that the structure, aerodynamics and mechanical solutions which were built with a tight weight limit, were not only valid, but that they showed the effective design and experience of the builder in manufacturing helicopters. The “CH-4” was an ultralight one-place helicopter with semi rigid rotors without a stabilizer bar, entirely metallic, with a spider type control system.

In 1986 a German helicopter magazine published; “It’s a long journey to Saladillo village in the Argentine pampas. Only TV and long distance bus, which are parked in front of typical restaurants of roast meat, remind you that there is a foreign world outside.

However, you don’t imagine that there is a talent who lives calm in a veneer shed in the heart of the country. This talented man has just designed and built the best with four helicopters for his own satisfaction. Augusto Uderico Cicare is the name of the man who has his soul dedicated to this work”. 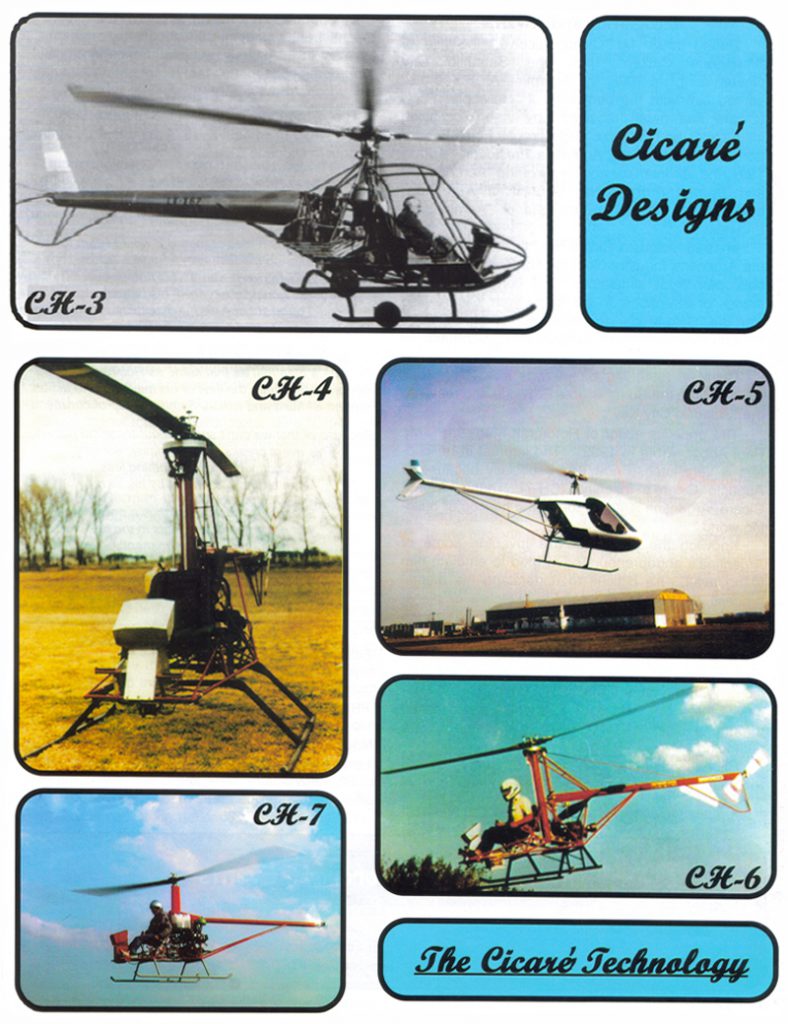 The Argentina Air Force authorities take an interest in Cicare’s “CH-4” ultralight helicopter and he wins a contract with the Aeronautic Industry Council of Argentina. In 1986 Cicare starts building an agricultural prototype one-place helicopter he calls the “CH-5” but this contract was canceled and it only flew 40 test hours. Like many experimenters Mr. Cicare continued making improvements. It had a basic metal structure with the main and tail rotor blades and the main rotor hub being made of fiberglass. It had a conventional configuration and a Lycoming 150 hp. engine.

During the building of this model he had to verify the performance and stress limits of dynamic components, so he built a test bed which was another helicopter: the “CH-6”. It was of much value to professional helicopter pilots. When Mr. Dennis Fetters, an American autogyro builder heard that at the edge of South America this development was in progress, he traveled to Argentina to fly it. Mr. Fetters was so impressed that he invited Cicare to the Experimental Aircraft Association “Fly-In’ at Oshkosh, Wisconsin, U.S.A. A number of aviation magazines profiled the “CH-6” because the design was simple and safe, had excellent performance, evident stability and very good handling qualities. A tentative business contract for building it in the U.S.A., with a cabin similar to the McDonnell Douglas 500, was short-lived but the “Mini 500” ultralight helicopter uses the singular command system registered by Cicare.

In 1991 Cicare decided for first time to market his designs. He then made evident refinements to the “CH-6” and the “CH-7” prototype was born. An Italian enterprise “EliSport” bought the production rights. Mr. Marcello Gandini, who designed some of the Lamborghini Italian cars, was contracted for this enterprise and he designed the cabin which changed the “CH-7” to the “CH-7 Angel” experimental helicopter. It’s remarkable that this aircraft, with only 64 hp has surpassed the theoretical “standard” relation of 5 or 6 kg to one horsepower. Engineering books give this as the maximum value for successful helicopters. Mr. Cicare, who didn’t learn to build helicopters by reading books, raised the margin by 20%.

In the beginning of 1993 a two-place version of the “CH-7”, the “CH-8”, was tested. Two 64 hp engines were integrated in a “twin pack” by a creative mechanism, which is currently in the patents office. The first flight showed an excess of power that marked a higher performance.

At the end of 1993 he began a series of tests that would document the sequence of learning to fly. This experimentation led him to build helicopters that were anchored to land and were particularly helpful to development of the conditioned reflexes that a pilot needs to fly. This is very useful during the assimilation of the hover flight because it is at that moment that the pilot seems to have the most difficulty. The result was a flight simulator; a basic “CH-7” helicopter, which was fastened to a support that allowed it to move around in all directions with a top vertical limit of 1.5 meters.

This flight simulator allowed a pilot to progressively adjust the control movements until they reached the equivalent of piloting a free flight helicopter. The results, as Mr. Cicare has described, are stupendous; a person can learn to hover the helicopter with only four hours of flight simulator “SVH-3” training. This is how the Argentina Army Aviation, Air Force and Federal Police pilots learn.

Recognition and Awards During 1993, Mr. Cicare received the title of “Illustrious Citizen” from the Saladillo City Government. In 1996, the Argentina Air Force presented him with the certificate of “Helicopter Pilot” (Cicare had never received any theory or flying instruction), and the prize “Argentina Air Force Friend” from the hands of the Argentina President. And in 1997, the aeronautical engineers of the “Aeronautical and Spatial Professional Council of Argentina” bestowed on Mr. Cicare the title of “Aeronautical Engineer”. 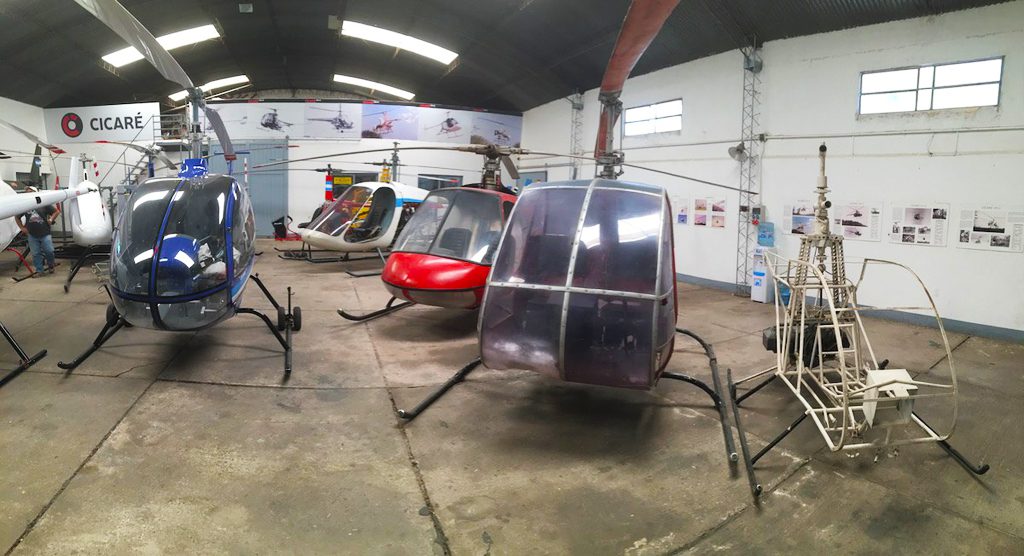 On May 1999, Mr. Cicare was titled “Illustrious Citizen” from the Buenos Aires Province and received the “Saladillo City Key”. The previous editor of Rotorcraft Magazine , Mr. Paul Abbot, wrote in 1992: “The interest in helicopters is very intense now and especially because of Augusto Cicare’s machine (CH-7). Thanks to Mr. Cicare, Argentina is at the top of the helicopter building world.” Knowing the results of this inventor, some of Argentina’s entrepreneurs have tried to emulate him to no avail. 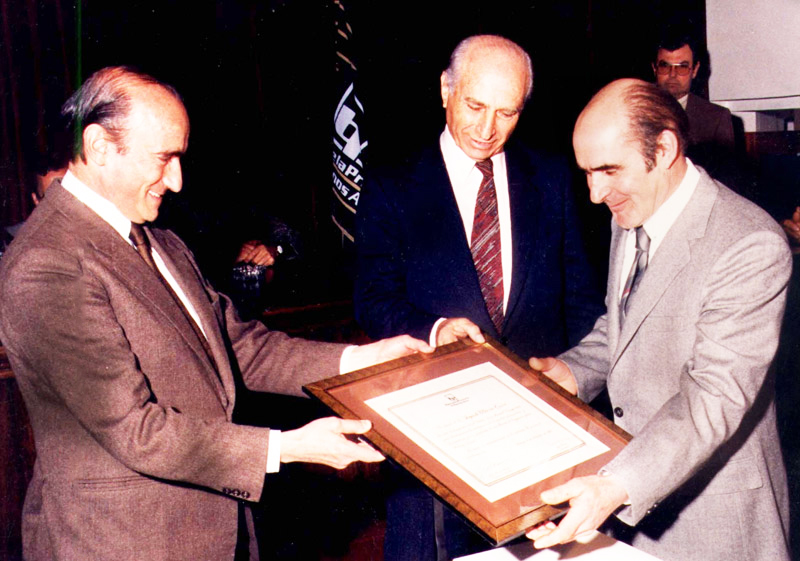 It’s difficult to understand his mental process, as he has never made sketches or plans. The few mathematical calculations are only in rough copy. Precise values such as transonic aerodynamics, ergometrics, flutter, materials resistance, and resonance, etc., are inherent to his experience and intuition.

With the lathe in his skillful hands Cicare conceives three dimensionally. Everything is processed through a biological CAD-CAM; this is the Cicare technology. His experimentation isn’t finished. In my last visit to Saladillo, Mr.Cicare guided me to a dark room in his workshop, turned on the lights, and asked me what I thought. I felt a sudden sensation of excitement but this, alas; this will be the subject of another article!

A Tribute To Mr. Cicare

The Argentine journalist, Santiago Gonzalez Valdez, wrote this poem in 1974 as a heartfelt tribute to Augusto Ulderico Cicare

“He wasn’t a man who learnt the formulas in the university, he was a man that as that same as Robinson Crusoe was alone, between the limit of his mind and the action: Here he is! Mind and action. Points of prop of our friend. Because of that we can’t speak about technical papers.”

“This event breaks with the classic scheme. It’s nothing else and nothing less than a man who thinks by his own. Because of this his action is a poem, but not a poem that floats in the air. It’s a poem that permanently runs out of the soul of this creature. A poem that he can touch with his fingers, a poem that goes over of his marvelous soul.” 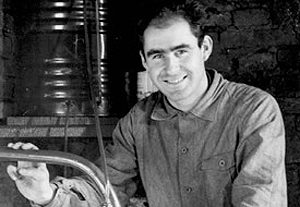 Be the first to comment on "Augusto Cicare – Helicopter Designs"