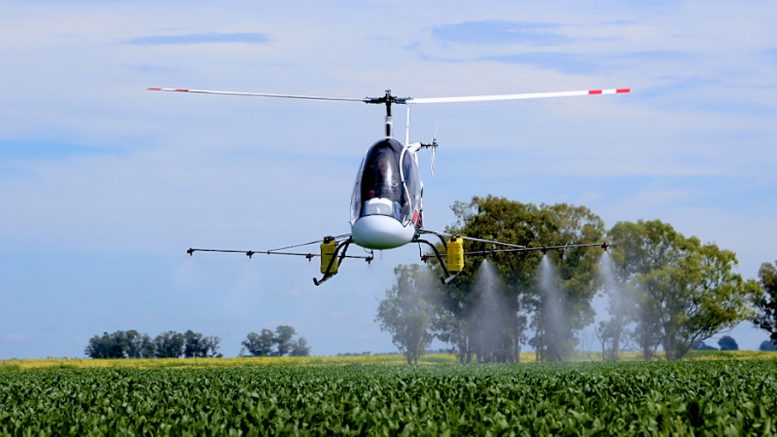 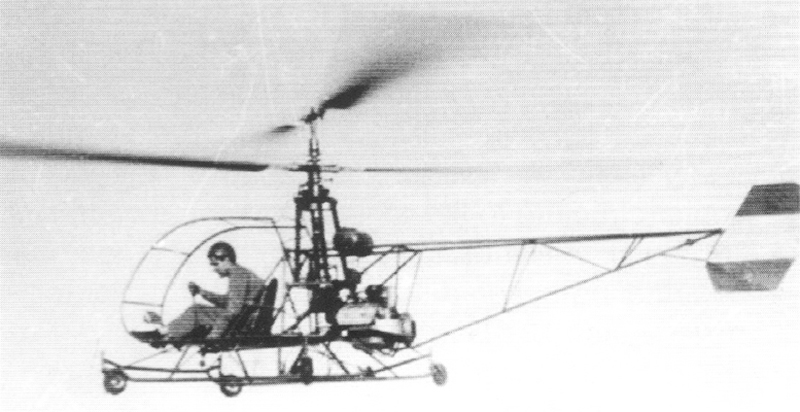 Inventor Thomas A. Edison said: “Genius is one percent inspiration and 99 percent perspiration”, and this is the way that Mr. Cicare explains his work on various apparatus and systems. Helicopters in particular, developing on little theory and much work; trial and error without rest. Mr. Cicare is like a legend who has overcome the Argentine frontier. People from many countries around the world often go to his hangar to visit this extraordinary man.

A long time ago, when he was working on one of his early projects, a helicopter landed near his workshop. As Cicare approached the helicopter, the pilot opened the door and said: “I am looking for Mr. Cicare.” Cicare answered, “It’s me”. The pilot then congratulated Cicare on his work. Events like these make Mr. Augusto Ulderico Cicare very happy because he realizes that others recognize his efforts. 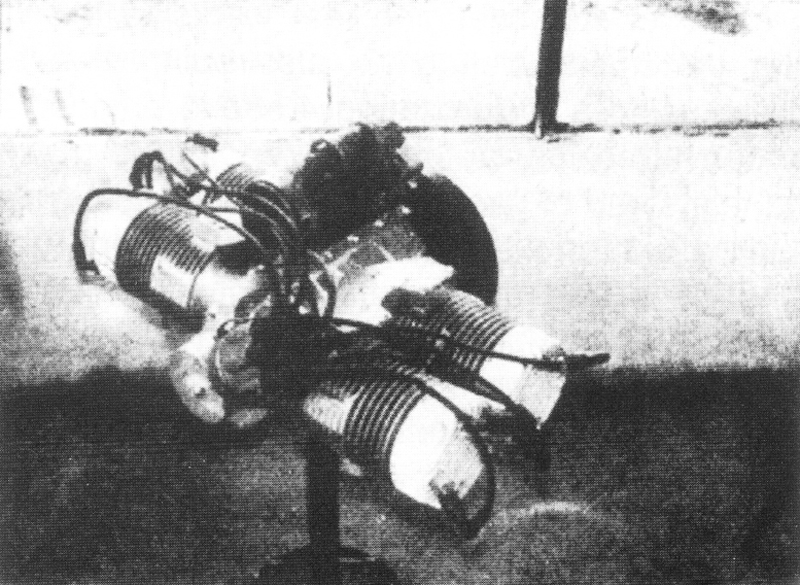 Mr. Augusto Ulderico Cicare was a self-made inventor who was born in the Buenos Aires province of Polvaredas in 1937. He has a strong intellect and is considered a “genius” by many important people who know him. Cicare is a partner of the Cicare Helicopters S.A. firm.

He is in the business of developing light helicopters and flight simulators at his location in Saladillo City, Buenos Aires province. Several of Argentina’s newspapers, magazines and TV programs have publicized his developments. During his life he has received many awards for his technical abilities.

Cicare found his inspiration and knowledge through the development process of his helicopter technology. Living in a small province he had limited access to technical knowledge, but nonetheless, used similar processes as most helicopter factories. It’s amazing that his helicopters could fly.

The aviation industry proves by documentary evidence that several models could have only been static models or that his test flight would have ended in an accident although they had the necessary money, engineering assistance, and backing of the most technological advanced countries.

Cicare’s helicopters did fly despite evidence that attempted to prove the contrary. Cicare possessed the same fire, which was engraved in the spirit of every successful helicopter pioneer. Igor Sikorsky once said “To design an aircraft is nothing, to build it is little, to make it fly is everything”. 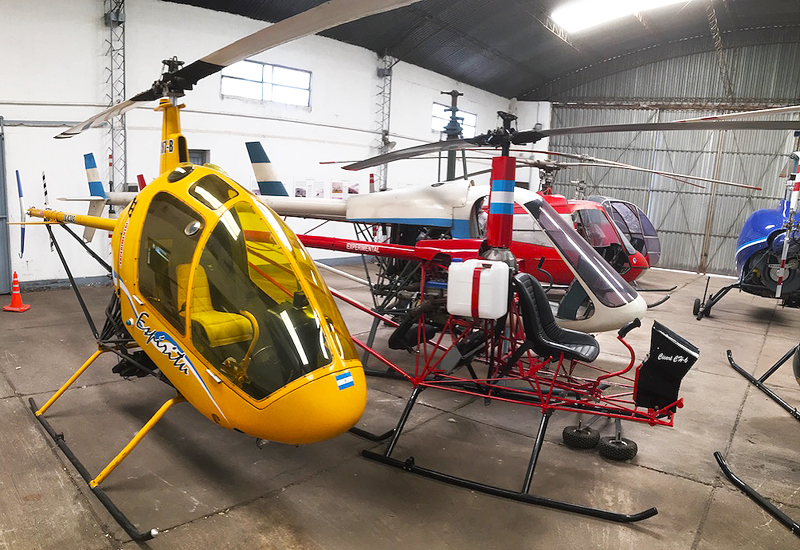 A collection of Augusto Cicare helicopters

Mr. Cicare had only finished primary school when his father fell ill of arteriosclerosis. As the oldest of five children he had to leave school and work to support his family. It was then, with the use of his fathers’ lathe on his free days, that he was able to concentrate on his innovations.

Sometimes his mother woke up at midnight to serve him a “mate cocido” cup that finally turned cold while his concentration increased. (The “mate cocido” is a traditional Argentine drink.) In his fathers’ workshop he built the great majority of his first tools basing their design on catalog sketches and factory brochures. When he was eleven he built a model steam engine that works to this day.

During that same period he also built a washing machine using a reciprocating 4-stroke engine. He also converted an automobile engine to run on propane instead of gasoline. When he was eighteen he built a two-stroke diesel engine with only three moving parts and a lubrication system which was patented in September 1965.

When the patent office engineer saw it, he said: “Theoretically it can’t work…” Yet some of these engines, from a production of nearly fifty that Cicare made years ago, are still working in some isolated farms. When he was 22 years old he made a motorcycle for his sister, including the engine, fairings and automatic transmission. 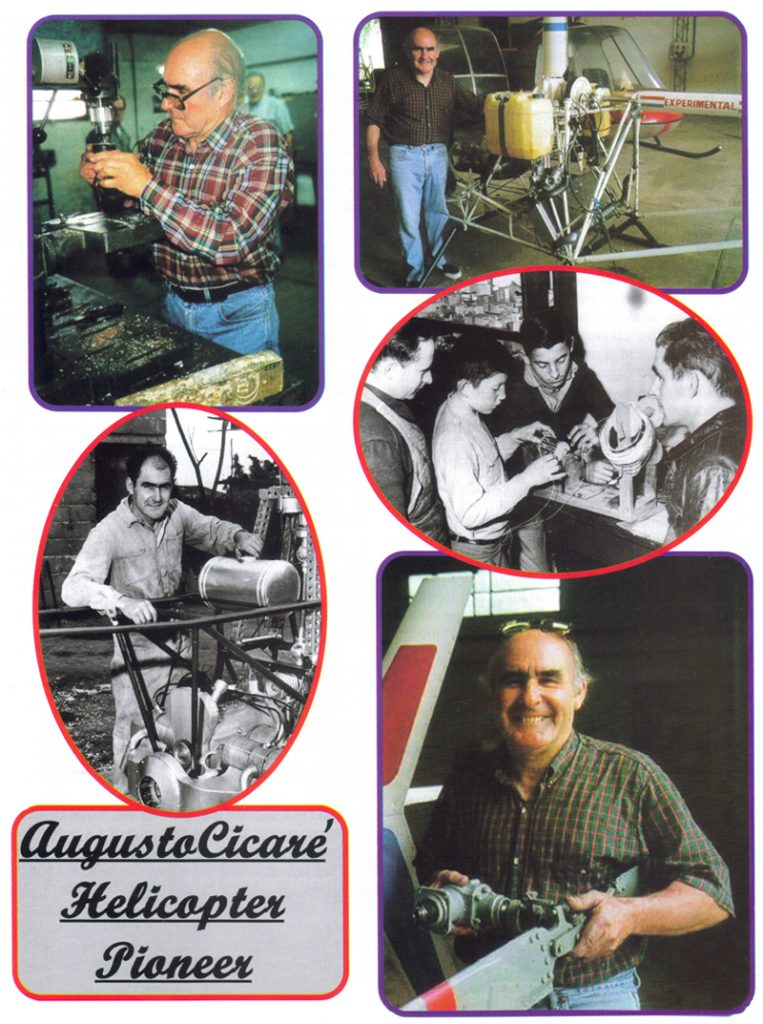 In 1961 he returned to an old aspiration, to make and fly a helicopter; the “Cicare 1”. He had been working on it for four years and it was the first successful rotary wing aircraft built in Argentina. When he made it, Augusto had only seen helicopters on the pages of magazines.

It was a helicopter made of iron and steel with two coaxial rotors. These materials were taken from scrap or the local village blacksmith treated them. He also built its engine; a four stroke, two cylinder with horizontally opposed cylinders, cooled with forced air from a fan, which was fastened to the crankshaft. The rotor blades were made of wood and the aerodynamic profile was totally original since Cicare did not have access to aerodynamic books.

He determined what he would need by proportionally reducing the wings of an airplane from the local air club. Mr. Cicare remembered: “then, it was the only source I could make use of…” How did Cicare determine the cord must be right? “Well, in a magazine of that time there was a man standing by a USA made helicopter, so I compared the size of his head with the size of the rotor blade…” It was amazing he could determine the exact dimensions of the rotor blades in this fashion.

Cicare’s homemade engine had only 30 HP and wouldn’t take off with him on board. He was able to verify the effectiveness of the design by hovering the machine without a pilot. When Mr. Cicare stood beside the machine and operated the controls he found he could make it take off and land. Upon discovering the engine was the problem he built another one with four cylinders (in fact he added another two cylinders), this doubled the power and Mr. Cicare was able to take off.

He was not only the first successful helicopter builder in Argentina, one of the few in the world, but a pilot who had never taken any flying instructions nor flown in an airplane as a passenger. Many times he was judged because he tied the helicopter structure to the ground with cords or chains to make his first flight test. Later on, this method now called tethering became the standard method of testing helicopters. The Harrier airplane with vertical take off and landing cannot be excluded from this elemental system of testing.

Because he didn’t have the necessary technical knowledge, he built a control system with a structure fastened to the rotor axis. This system also made possible the displacement of the center of gravity while the rotor axis inclined to the intended direction. 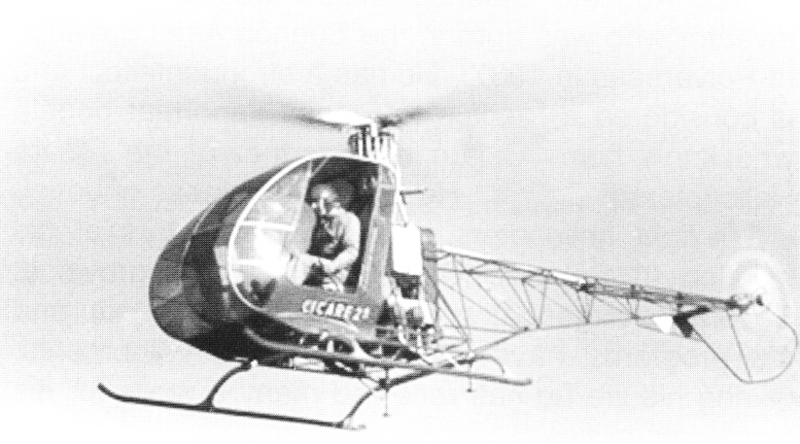 In a helicopter engineering book of the time the author wrote: “…the control by the direct inclination of the hub is practically impossible in mechanically driven rotors.” But Mr. Cicare hadn’t read this so it was the control system of choice for his first helicopter. Some of the early flight tests were made inside of a pig lot and others were made out in the open with the help of the village children who carried his creation. The crudity of these early experiments more than made us absolutely sure of the value of so large an undertaking.

Three years later he built his second rotary wing aircraft, with help from the surrounding village of Polvaredas and the creation of the “Augusto Ulderico Cicare’s Friends Association” presided over by journalist Santiago Gonzalea-Valdes. This two-place project, side by side, had novelty systems such as a hydraulic system without a pressure pump to the main rotor control and fiberglass rotor blades. This was a technological advance. A home video of that event shows “Cicare II” flying with a sling load.

In this same period, Juan Manuel Fangio asked Cicare to design and build a new automobile engine. This four stroke V-4 engine had four valves per cylinder and was the first in Argentina and one of the first in the world to use tooth belts. It was exhaustibly proven by Mr. Fangio who drove it for more than 100,000 kilometers, and concurrently said that it was “unbreakable.” 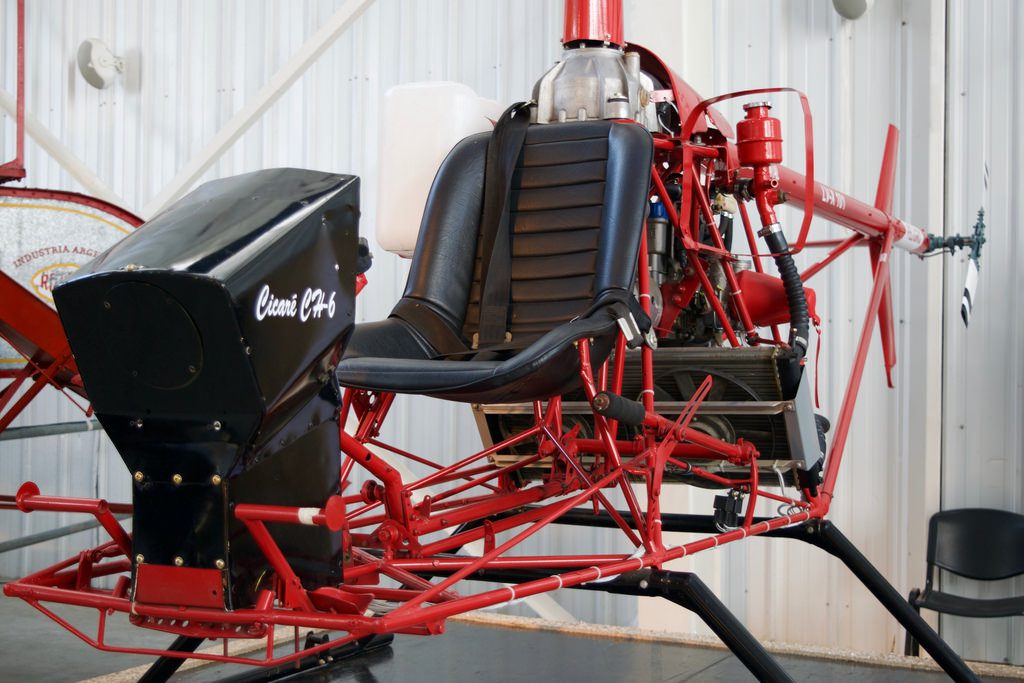 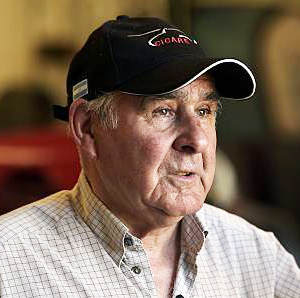 Be the first to comment on "Augusto Cicare Helicopter History Details"