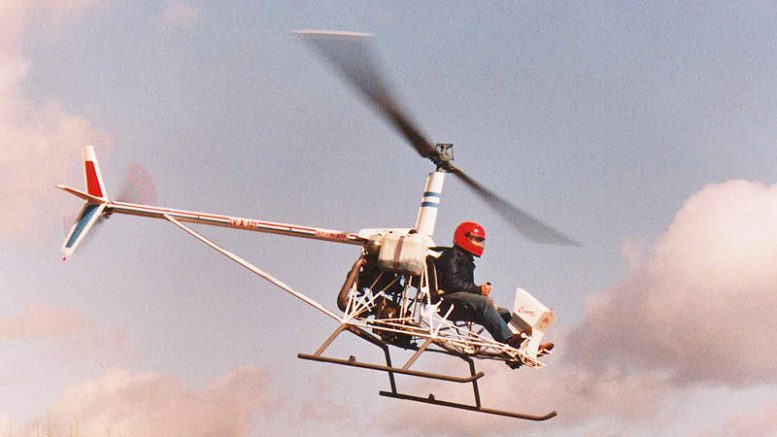 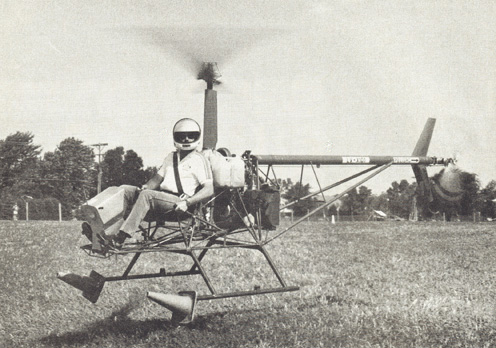 CH6 helicopter control response and authority were excellent on the Cicare-Six helicopter. During daily airshows at Oshkosh, demonstration pilot Dennis Fetters moved highway cones around the ramp and would climb to several hundred feet in a hover.

A new helicopter flight control technology which provides simplicity to construction and outstanding stability to its operation mark the CH6 helicopter design as simply: “A Revolution.”

One hesitates to make metaphors about a revolution coming from the country of Argentina. Thoughts of Juan and Eva Peron or Falkland Islands come to mind.

Nevertheless, Augusto Cicare brought it a revolutionary helicopter design from his home in Argentina to the EAA convention in Oshkosh this year and the technology could well bring the price of an honest-to-goodness helicopter within the reach of the average hard-working fellow.

For me, personally, the EAA convention in Oshkosh is an exercise in looking for the new needles in the same old haystack which has been around for years with much legwork involved.

Because Oshkosh tends to come near the end of the airshow season, by the end of July, I have been from Sun n Fun in Florida to Rain and Pain in Washington, and everywhere in between. I’ve seen plastic airplanes and paper airplanes; I’ve seen the same performers do the same aerobatic routines so often that I know when their airplane is out of position before they do.

But Oshkosh always delivers. Just about the time I’m willing to admit that there is indeed nothing new under the sun, up springs a vision of the future of vertical aviation. 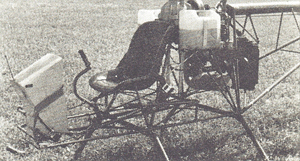 The CH-6 helicopter is based on an industry standard triangulated 4130 chromoly steel airframe.

I was dodging the thunderstorms on the ultralight airplane display area at Oshkosh when I came upon Dennis Fetter’s familiar Air Command trailer – the very one from which he hawks his popular line gyroplane. I’d gotten used to seeing Fetter’s snazzy and well finished gyro design parked out in front of the trailer so I was surprised to see a rather crudely built helicopter parked there instead.

The first thing I noticed was that the helicopter was powered by an old single ignition Rotax 532 engine. “This ought to be good for a few spectacular photos,” I thought. I kept looking at the helicopter, trying to figure out what was different about it.

Suddenly it hit me. There was no swashplate for the CH6 helicopter control linkages. There was no complex accumulation of rods, bellcranks and adjustment leading from the control sticks to the rotor head.

The magic behind the CH6 helicopter

In fact, it looked like the flight controls ran from the cyclic and collective to a point under the transmission where they changed directions via simple bellcranks and disappeared into the bottom of the transmission. “How dey do dat?,” I asked myself in the grammar, syntax and spelling reserved for off – duty literati.

Some of us are more bashful than others. I got down on my hands and knees and innocently peeked under the skirt of the little helicopter. As my eyes adjusted to the darkness I saw – a trash bag (?) wadded – up and stuffed into the crux of the matter. I was reaching up to remove the offending obstruction when a pretty but grumpy – looking Latin girl who nicely filled a Revolution Helicopter T-shirt said something to me in Spanish. 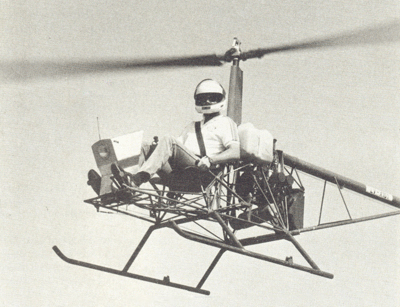 In one of the most stable helicopters I’ve ever seen – Dennis Fetters demonstrates the “hands off” stability of the Cicare-Six helicopter which made its debut at Oshkosh this summer.

Though I learned sufficient English in public schools to make myself understood, I must confess that I learned my Spanish in fishing pangas and cantinas. I wasn’t sure at the moment, but I believe the lovely Spanish lady cast doubts as to the species of my maternal ancestor.

I was in the process of removing my arm from the path to sin and simultaneously reviewing in my mind the handy Spanish phrases I had picked up while marlin fishing when up walked Dennis Fetters. He spoke to the young lady in what sounded like a mixture of Italian, pidgin Spanish, Portuguese, and Urdu.

With flapping gestures reminiscent of a bilious pelican he explained to the young lady that I was, without question, one of the best pilots to have ever have flown and that, by general consensus, I was going to win the Noble Prize for literature this year.

Somewhat mollified, the Hispanic hostess retreated and Dennis and I got a chance to talk about the new CH6 helicopter.

It seems that Dennis Fetters of Air Command Gyroplane fame, and the CH6 helicopters designer, Augusto Cicare, have formed a company called Revolution Helicopters to build a single – place helicopter which looks like a scaled – down Hughes 500. After hours, maybe days of deliberation, they came up with the very clever name of Mini 500. Though not likely to win any awards for creativity or originality, the name does effectively describe the product.

At Oshkosh, Revolution Helicopters was using the Air Command trailer, which was recently sold with all the rest of the Air Command assets to Venture Industries, to demonstrate the Cicare Six (6) LV-X101 helicopter (Later known as the CH6 helicopter), which they were calling the Revolution Mini 500 prototype. Got that?

At the time, I wanted to point out to Dennis Fetters that the Cicare – six (6) couldn’t be the Mini 500 prototype, but they had already printed up all their literature, so I refrained. After all, proto means first, as in origination; and the type means type, as in type. So the Cicare – Six (6) aka CH6 could no more be the Mini 500 prototype than the Bell 47 could be the Huey prototype. 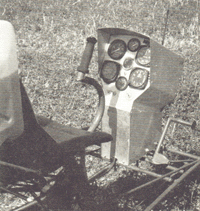 Consider the following facts: Other than they have a big rotor blade on the top and a little rotor blade on the back, the C – 6 and the Mini 500 have no similarities. The Mini 500 is supposed to be a slick, fibreglass enclosed, modern – looking helicopter – much like the Huges 500, and the C – 6 is an antiquated – looking, welded steel structure where the pilot sits out in the open.

The C – 6 was completely assembled in Argentina while the Mini 500 will be shipped as a kit from Liberty, Missouri. The two aircraft really have little in common.

Of course, thought the Cicare – Six (6) LV-X101 is not the Mini 500 prototype, it is an excellent proof – of – concept rotorcraft for the power train and control linkages which will be used in the Mini 500. In that regard, the C – 6 is nothing less than outstanding.

On those days at Oshkosh when the EAA allowed flying, Dennis Fetters put on an outstanding demonstration in the new helicopter. From a standing start he would grab a large handful of collective and climb in hover to about 300 feet. Of course, had the Rotax retired at about 100 feet there would have been no hope of autorotation, but that’s show biz. From that altitude he would move into transitional lift and fly away without losing a foot of altitude.

To demonstrate the manoeuvrability of the Helicopter he performed a routine with highway cones where he tipped them over with the skids, moved them around, and then reset them upright. In the grand finale, Fetters moved the two cones so that they were at the exact width of the skids. Then he tipped them both over and picked them up on the skids. He received a standing ovation after each demonstration – there were no chairs.

Though I’d heard from Fetters how stable the helicopter was, I was sceptical until the photo session when I was looking through the viewfinder of my camera and noticed that he was flying the helicopter with only one hand. In most helicopters, if you let go of the cyclic in a hover you are going for a ride. But the little C – 6 just sat there, motionless. 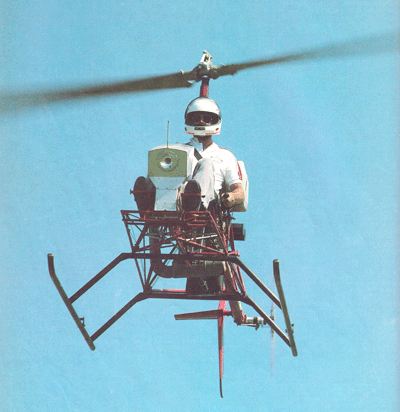 As we go to press, the rotor blades, drive train and control system on the C – 6 have held up to 350 hours of flight testing. Fetters is justified in trying this combination in a new design.

Unlike the open skeleton of the C – 6, the pilot of the Mini 500 will sit in a fibreglass bubble. The C – 6 engine and transmission will be attached to the back of the fibreglass pilot compartment and the skids by a yet-to-be-designed chromoly structure. As I understand it, the Mini 500 will also feature a composite tube and “T” tail. According to Fetters, the first Mini 500 – the true prototype – should be flying by end of the year.

Though the control system is a matter of several world – wide patents, according to Fetters, they still kept the new hardware covered with a trash bag except while flying. Hence my less than tropical reception during initial inspection.

According to Fetters, things are on schedule for the Mini 500 project. They have just completed computer-assisted drawings of the new rotorcraft. The next step is to build a wood-and-plaster mock-up of the cabin and engine enclosures. From this mock-up, a mould will be made, and from the mould will come the first Mini 500 – hopefully by year’s end. 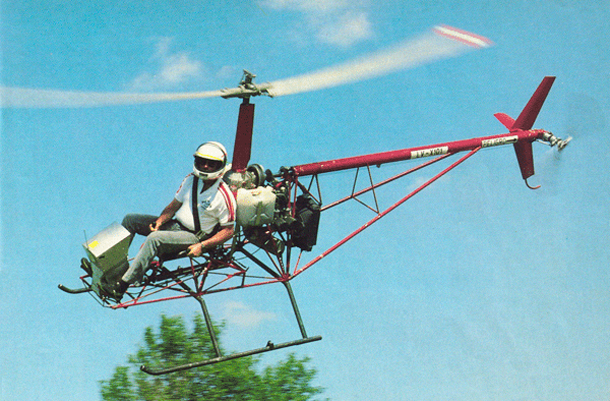 EDITOR : Not long after this article was written (1990) there was some disagreement between Mr. Fetters and Mr. Cicare regarding their joint venture involving the development of the CH6 helicopter evolving into the Mini 500 helicopter.

What followed was a nasty fallout where Mr. Fetters went it alone “borrowing” Augusto’s swash system as inspiration for his own very similar design which he then patented – prior to Augusto having a chance to patent his design. Luckily (for Augusto) they were offered separate patents even though they were basically identical in operation.

As we know – the rest is history. The well experienced engineer, Mr. Cicare went on to design many successful helicopters both single and two seats, coaxial, twin engine, training and military turbine versions. All along improving and correcting any areas of concern, continuing his reputation as one of histories great helicopter designers and builders.

Mr. Fetters on the other hand – faced law suits and contending with a number of fatalities from his Mini 500 design – (including a pilot with over 30,000 helicopter flight hours). Yes, the Mini 500 had plenty of issues, but so did the CH6 in the beginning. The difference was that Mr. Fetters unfortunately sat on the issues for some time, only to address them long after the damage was done to his and the Mini 500’s reputation.

There is more information on the history of the Mini 500 on this site under Design/Kit Helicopters/Mini 500. The primary (and most serious) issue was the Mini 500 being underpowered thus engine seizures being common. Where is Mr. Fetters today? Well he runs a company called Fetters Aerospace – and apparently is on contract with a project residing in China!

NOTE: Revolution Helicopters are no longer in existence and the Mini 500 helicopter is longer in production. Article date 1990 courtesy John W. Conrad.