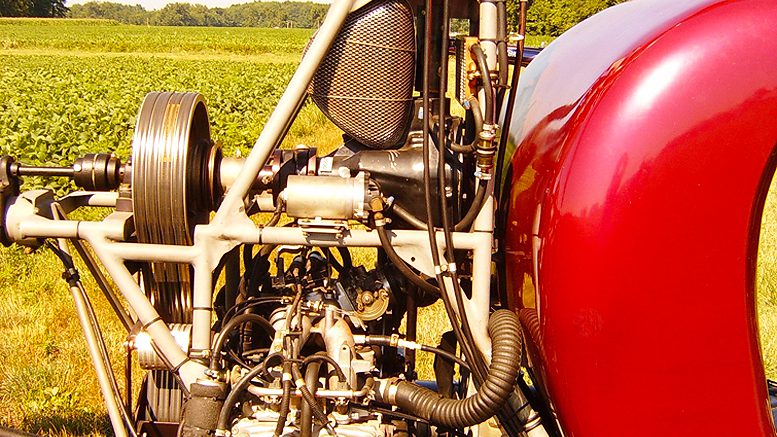 Designer and builder Bob Kinney completed this experimental hot rod helicopter in one year, one month, one week, and one day.

The intention was to build a solid, cross country capable single seat helicopter from commonly available industrial and auto parts without the need for complex machining. It also had to be easy to maintain and inspect for pre-flights.

Bob named his helicopter the “Kinney HRH” (Hot Rod Helicopter) because of the lack of doors and hood, much resembling the desirable aspects of the automotive hot rod of days past – and no, Diane (wife), I won’t fall out, I promise! – The air cleaner is from a dual quad set-up; many of the parts used to built the helicopter came from the local auto parts store or were mail-ordered from speed-shop catalogues.

Here are some of the hot rod helicopters key features.

▣ The counter clockwise rotation of the composite Waitman rotor blades makes it easy for those use to standard American helicopters to transition to the Kinney design Hot Rod Helicopter.

▣ The hot rod helicopter airframe is constructed of thick wall aircraft grade 4130 chromoly steel, and the pod is made of hand laid fiberglass.

Bob Kinney had a number of objectives in mind when he designed the helicopter. He wanted to make a relatively inexpensive single-place helicopter. He wanted it to have reliable four-stroke power, and a tail-rotor driven by a shaft. Basically he wanted what we all have been wanting – but not getting with designs such as the Rotorway Exec and AW95 helicopters.

He also wanted the hot rod helicopter to be economical to operate (it runs on unleaded auto gasoline) and to have low maintenance, with low-cost replacement parts. He wanted it to be durable and reliable, and “fun, fun, fun” to fly. Bob also wanted the helicopters dimensions to be such that it could be “stored” in his garage.

Well, Bob was able to meet most of these design objectives, though not all. He was indeed able to get the helicopter into his garage, but to do so he has had to fit his car under the tail boom (thankfully it’s a very, very low sports car), and he does have to take the main rotor blades off in order to get the doors closed.

Also, although initially the objective had been to keep the empty weight to about 700 pounds, the hot rod helicopter ended up weighing a little over 1000 lbs (Bob accepted a little more weight in order to increase safety). As with most helicopter prototypes, they can be improved upon with following models. There are many places, including the airframe, cabin and engine, where weight could be reduced while retaining acceptable safety margins.

Overall, Bob is quite happy with the way it all turned out, and this Summer he plans to take the hot rod helicopter to Homer Bells, Mentone, and to Oshkosh. To date, he has flown the helicopter in ground effect, and all seems very promising – (UPDATE: has now flown all flight parameters with ease!). 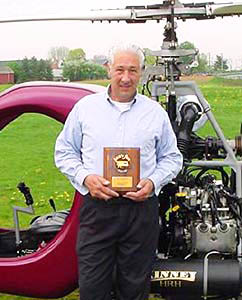 Bob Kinney and his helicopter award

The first flight was conducted on April 8th by Charlie Lavens, who has been flying helicopters since 1984. Charlie Lavens, who owns Cal Manufacturing in Illinois (where he does aviation and small-run production of all types, including aluminum castings, lathe and mill work, etc.) did all the castings and machining on the swash plate assembly (basically similar to the Rotorway Exec helicopter) and made the main rotor shaft.

Don Parham (Subaru engine conversion expert) of RFI, in Indianola, OK., made some of the helicopters drive-line parts, the aluminum flywheel, and the thrust plate and pulleys. Most of the other machining was done at Park Hill Machine, inc., in Lancaster, PA. (Bob’s hometown).

Phil Toews worked very closely with Bob doing the project’s machining over a number of months, making high-quality parts: the whole crew at Park Hill just did a great job! To these people, and to everybody else who helped along the way to getting the helicopter to its first flight, Bob expresses his most sincere appreciation!

EDITORS NOTE: Bob has since put MANY flight hours on his original design HRH (Hot Rod Helicopter) and has since sold on the distribution rights for the HRH helicopter plans to Vortech who now market and distribute on his behalf.

A full Hot Rod Helicopter flight demonstration video is available for sale along with a few different plans/blueprint options.

While these helicopter plans give a great amount of information and detail for its construction, they shouldn’t be considered “complete” as there is some important and essential detail missing – but it can be worked through with relative ease.

Also while there are sources for commercial main rotor gearbox substitutes, the HRH uses a converted drive transmission (differential) from a vehicle that may not be available in your region though similar units can be used. The swash plate assembly is basically the Rotorway Exec as is the main rotorhead – the rotor blades appear to be SkyWheels, now made by Canadian Home Rotors for the Safari kit helicopter.