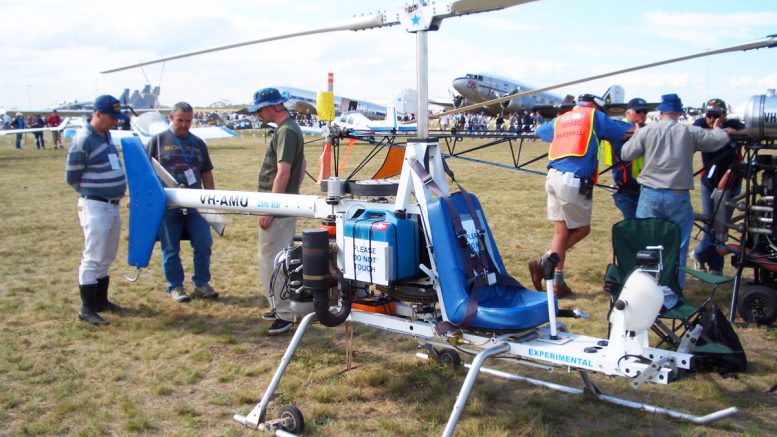 The single seat Buzzard helicopter incorporates the simplicity of a basic aluminium airframe with easily maintainable design features. Originally based on the Lonestar kit helicopter of the mid 90’s, Redback Aviation found ways to improve a number of areas to increase safety and reduce maintenance of the helicopter.

The redesigning LoneStar one has been thorough though the new Buzzard personal helicopter still bears much resemblance to the craft that originally inspired its creation. We have stuck to the basic airframe layout but made mechanical improvements to some of the drive system and main rotor head. It has been re-engined now though still retains the short tail boom with cog belt driven tail rotor.

The Buzzards drive system has been kept simple yet strong and reliable. Primary drive is by standard commercial helicopter style clutchable multi v-belts followed by an industrial quality cog belt to the tail rotor. The belt can be tensioned from the rear of the tail boom and checked mid span for deflection as per manufacturers requirements.

A typical swash plate mounter on the main rotor shaft controls the rotor blades. The main rotor blades are mounted on thrust loaded ball bearings on a modern design rotor head similar to the Mini 500 offering strength and reliability.

We chose to use the more widely accepted Hirth or Compact Radial Engine two stroke power-plants known for their lower rpm range and reliability. As the Buzzard exhibits such light weight, there is little need for excessively expensive, higher horsepower engines.

Running the two stroke engines within their limits for sustained or continuous horsepower ratings will result in adequate power and predictable reliability. Remembering that this helicopter IS NOT intended as a “cross-country” chopper, but rather an introductory sports helicopter – or “field-hopper”.

Airframe and drive-line components for the basic helicopter layout:

As with any aircraft there is some machining involved in building the Buzzard although this has been kept to a minimum to reduce costs while still retaining a high level of safety.

It is recommended that all critical components be professionally engineered to assure accuracy. Parts count has been kept to a minimum to make the Buzzard helicopter an economical homebuilt helicopter project.

Due to there being quite a few new kit helicopters that are filling this niche very economically, we chose to concentrate on one design being the Spider helicopter. We may revisit this design in the future so watch this space! The Buzzard was originally designed to suit the needs of the many, while the Spider is a design of personal preference – a passion of building my own vision of a personal helicopter.

PLEASE NOTE: We have no other information on this design at the current time. If we return to this project, it will be publically announced.