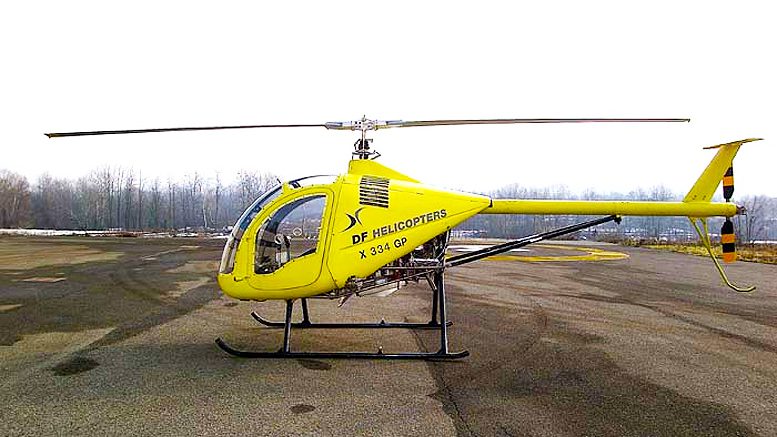 Dragon Fly Srl. was formed by the Angelo and Alfredo Castiglioni brothers at Cucdago in northern Italy to build a small side-by side two-seater which was, initially the Dragonfly helicopter, designed for their own personal use as an easily transportable machine for use in archaeological exploration.

Two prototypes of a single-seat model were built and flown in 1989 as a precursor to the two-seat production model. The Dragon Fly 333 is technically an ultralight, but is built to JAR Part 27 standard and was approved in 1996 under the Italian VLR (Very Light Rotorcraft) standard. Dragon Fly production was set initially at three per month, and the first production machine was delivered in late 1993.

Production totalled 51 (up to c/n 51-97) by mid-1997. The all-metal Dragon Fly has an enclosed pod fuselage with fixed skid and a tubular tailboom carrying a T-tail with a two-blade tail rotor. The main two-blade rotor is mounted above and behind the cabin and is driven by a 105hp Dragon Fly/Hirth F30.A2 two-stroke engine. The Dragon Fly can also be delivered as a drone for military use.

Original Dragon Fly company founded in 1993 by twin brothers Angelo and Alfredo Castiglioni specifically to produce the Dragon Fly 333 light helicopter, rights to which were taken over from general engineering company CRAE Elettromeccanica SpA. The company was taken over by German owners in 2001 and moved to a new factory at Ovada. The Dragon Fly 333 is being further developed into the Dragon Fly 334 GP.

In 2001, a Dragon Fly was flown at the Cielo di Volo air show, powered by a 112kW APU of undisclosed type.

First delivery of Dragon Fly in May 1994 to Chinese Civil Protection Volunteers. Total of 80 ordered, of which some 70 delivered, by late 1998 to customers in Abu Dhabi, Australia, Belgium, Czech Republic, France, Germany, Italy (37), New Zealand, Portugal and Turkey. First delivery of Italian certified version was in 1997; initial operator was Venice Aero Club. Dragon 334 deliveries had not begun by mid-2003.

One 84.6kW Rotax 914 flat-six. Transmission driven through centrifugal clutch and two V-belts. Fuel capacity 64 litres of which 57 litres are usable.

HELIOT variant is for military and civil special operations, with a 300kg useful load and is fitted with a camera and color monitor; can carry an external module to permit unmanned remote flying; with module removed, HELIOT can be piloted.

DF Helicopters was acquired in 2010 by a Swiss Group, Avio International Group.

More information can be found at DF Helicopters.