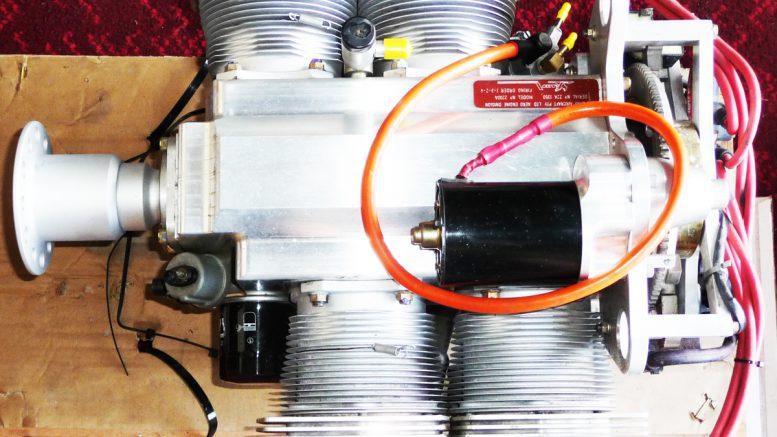 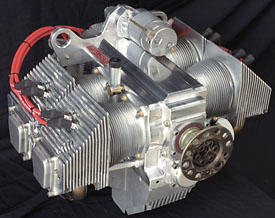 We found a significant inlet manifold pressure drop between the back of the carburetor and the inlet valves to the cylinders on the Jabiru 2200. Also the fuel/air mixture was being heated in the plenum chamber which was an integrally cast part of the oil sump, as is often the case in the well known aviation power plants. Heating the air/fuel mixture increases its volume; and so the mass of the mixture that each cylinder sucks in, is lower than would normally be possible if the mixture was kept cool.

80 HP was the minimum allowable for our part of the world, because it would give the M80 helicopter a maximum take-off weight capability (includes more than 3 hours fuel) up to +/- 2,000 feet, nothing fantastic, but acceptable we thought. To make sure the M80 helicopter had good performance, we had to re-think our position and see what we could do to keep 80 HP potential of the Jabiru 2200 up to +/- 6,000 feet.

We worked together with an engine specialist, well known in the European rally world, to see what we could do to increase power production without endangering the integrity of the engine. After all, a 2.2 liter (134 cubic inch) automobile engine can produce nearly double the power, but of course at much higher rpm. 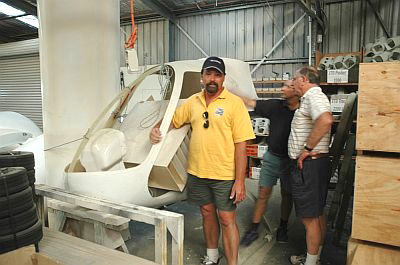 The Jabiru 2200 engine was designed for their aeroplane and is a direct drive to the propeller, so having the rpm much higher than 3,000 does not make sense for them. Most propellers are designed to operate in the 2,500 – 3,000 rpm range, so Jabiru need power in the low rpm ranges.

In a helicopter, the engine runs at a constant rpm regardless of power needs, so the most obvious way to get additional horsepower out of the engine is to run it at higher rpm’s. The first change was to increase the operating rpm of the engine.

The second change was to eliminate any induction losses caused by long intake ducting and associated increased temperatures of the air/fuel mixture. We first decided to use the same type of Bing altitude compensating carburetor, but two units, one on each side of the engine. This set-up using dual carburetors resulted in very short induction piping, however the synchronisation of the two carburetors became very important and different mixtures being fed to different cylinder pairs will cause serious problems.

The expanded engine cowling was not only aesthetically displeasing, but drag would probably have increased significantly at high speeds. We finally decided to scrap the dual carburetors and replace them with dual electronic fuel injectors.

During further tests, we found that one injector for a pair of cylinders did not work well. Injectors spray fuel into the air flow in very short pulses. The more fuel required, the longer the pulse. Depending on the required power, the associated fuel flow and the opening cycle of the injector, one cylinder could suck in nearly all the fuel sprayed into the air and have a very rich mixture, but leave its’ neighbour with a very lean mixture! This could easily be seen because the exhaust pipe of one cylinder glowed red hot, while the other did not. We were left with two choices:

We chose the simplest and cheapest – one injector for all. This solution gives us the extra possibility to add a separate fuel circuit with its’ own injector as a backup system. However fuel injectors seem to have very high reliability in the automotive world, so providing the fuel is properly filtered the likelihood of this component failing is extremely remote, especially if they are also life limited.

The electronic fuel injection required “3 dimensional mapping” of the complete engine rpm power / torque characteristics to determine the correct mixtures for different loads and the correct spark advance. In our case, we only operate at a single rpm, but we still need to check the multi point injection that we have maximum fuel efficiency at all possible power loadings. The engine now runs much smoother at idle and while spinning up the rotor.

The custom design of the electronic circuitry for the fuel injectors and electronic ignition is now finalised and will be delivered standard. We still retain a single conventional magneto with fixed ignition timing as a backup system. The combination of fuel injection and
variable timing electronic ignition (with its much higher voltage spark at low rpm) makes the engine much easier to start in all conditions.

The third change involved manufacturing a new cam-shaft. The higher rpm did not give optimal power results because the original cam-shaft timing was made to give good power / torque output at relatively low rpm. We now run the engine at + /- 3.700 rpm (which is only +/- 12% more than the original Jabiru set-up) but this requires different valve timing to get the maximum power and torque at the higher rpm.

Even though engine rpm is increased slightly, engine wear should not significantly change. Friction is increased, but engine wear is much more dependent on engine loading (the power produced by the engine) than on piston displacement speeds. At max. take-off weight and in normal flight regimes, the M80 needs between 50 – 60 HP which shows that our typical power loading on the engine is lower than on the Jabiru airplane, which should give engine life expectancies at least as good as their airplane engines (currently 750 hour TBO) Our electronic engine management system incorporates a maximum engine rpm limiter. It is currently set at 4,000 rpm. No matter what the pilot does, if the engine threatens to pass the maximum limit, fuel flow will be reduced automatically.

The fourth change was to eliminate the necessity of using Avgas in high power loading situations. The higher power output potential, now gave us the opportunity to slightly reduce the compression ratio, which reduces power output, but also reduces the chance of detonation. The 3D engine mapping made in combination with a Lambda probe, (which measures the composition of the exhaust gases), on the dyno test rig provided us with the opportunity to determine the correct fuel/air settings under all probably operating conditions so that undesirable “knocking” would not occur under heavy power loading using lower octane fuels. 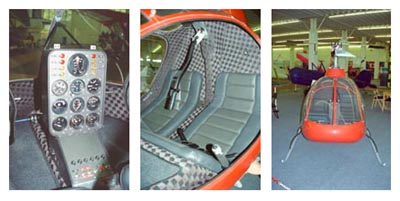 The changes to the standard fuel system have one disadvantage; in case of an electrical failure in the electronics controlling the fuel injector, or in the injector itself, the engine stops. In an engine with a magneto, a mechanical pump and fuel carburetion system , the engine will continue running without any electrical supply.

On the other hand, fuel injection eliminates carburetor Fuel bypass valve (blue) icing problems, and this is a big advantage.

Carburetor heat, which considerably decreases power output is the only remedy to keep a carburetor ice free in certain weather conditions, and pilots often need to add heat when they would have preferred not to. The chance of unexpected carburetor icing occurring is much more likely to happen than a sudden fuel injection failure. Fuel vapor lock is also eliminated in our new design, as the fuel line is pressurised and there is a return fuel line from the injector back to the fuel tank.

In hot weather or with an idle hot engine “cooking” its’ fuel lines, fuel vapor lock is often the cause of difficult starting. Pumping fresh fuel from the tank through the fuel lines and back before starting will eliminate any vapor or bubbles from the system and make starting under the most difficult circumstances easy.

The engine changes were the result of two years of tests, and not something we really wanted to do. We would have liked nothing more than to buy an “off the shelf” power plant that was suitable for our M80. Modifications of this nature, meant that the official test program was often postponed, but we thought that these changes were so important that the cost in time and money involved will be more than compensated by the increased performance.

Editors note: The Jabiru 80 hp aircraft engine has successfully been installed in the old Revolution Mini 500 helicopters with excellent results – featured in the gallery section elsewhere on this site. The Jabiru 2200 is definitely a better option than a two-stroke engine, though there are many other options.