The MC1 homebuilt helicopter at El Mirage fly-in, 2005. Clearly seen is the Subaru EA81 engine and cooling radiator plus the simple yet strong triangulated airframe.

There is not alot known about this mighty little machine. Peolpe repeated word have noted it’s resemblance to the Chinese clone of the CH-6 and CH-7 helicopters. A picture of the MC1 helicopter was featured on page 31 of the Jan/Feb issue of Rotorcraft Magazine and has been seen in other periodicals, homebuilt helicopter forums and aviation discussion groups (Rotary Forum and Yahoo Experimental Helicopter Discussion Groups). It has also been seen flying at El Mirage events in the past.

As confirmed by a French Aviation Journalist, it seems the French MicroCopter MC-1 (having a MC-1 prototype name, and aiming towards the production of a radial diesel powered MC-2), has no connection to the American MC1 helicopter that has been identified at the above events as built by Mariano Cordorniu.

Apparently the MC-1 helicopters builder and designer Mr Mariano Codorniu is a Cuban refugee that left there years ago (2006) and now lives in Riverton Ave, North Hollywood, LA (last known). He is said to have gone into some level of production. There are still a few projects floating around so keep an ear to the ground if you are interested! 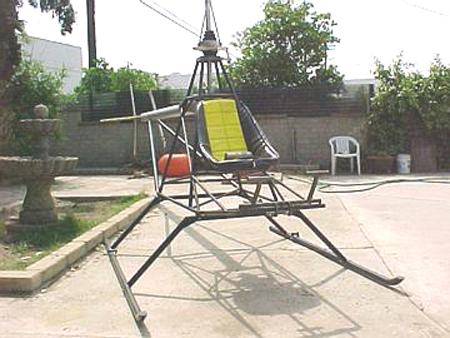 The MC1 helicopter uses Hughes 269 helicopter cones for the rotorhead and a seemingly little rear-end unit out of a 4-wheel ATV motorcycle, like a Honda or something, for the main rotor transmission.

This could possibly be insufficient for long-term use due to different stresses – though to date there have been many installed and flying without issue.

Further information is that while there was some good thinking involved in the MC1 helicopter, some of the stuff might raise your eyebrows. 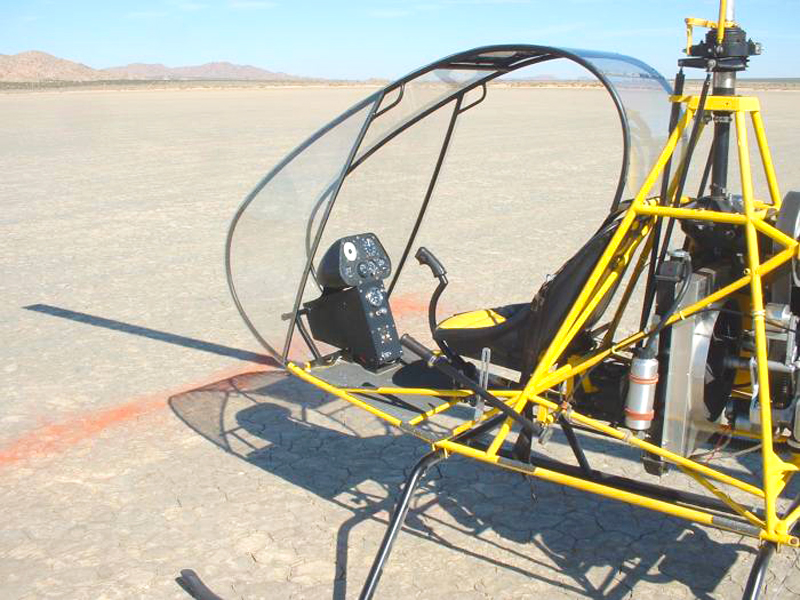 One possible weight saving area is the 1/2 inch thick 2 foot by 3 foot solid aluminum plate just to hold the engine on to the airframe as per the original design – the later Subaru EA81 version seems to have some differences here. 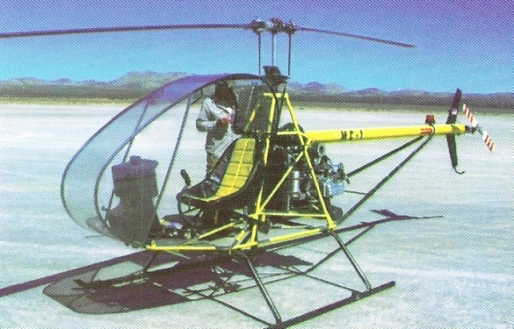 Reports are that the MC1 helicopter is a very impressive machine with quality workmanship by Mariano Cordorniu throughout.

Quote from a helicopter enthusiast that viewed the machine at a recent fly-in: “I fell in love with it…” 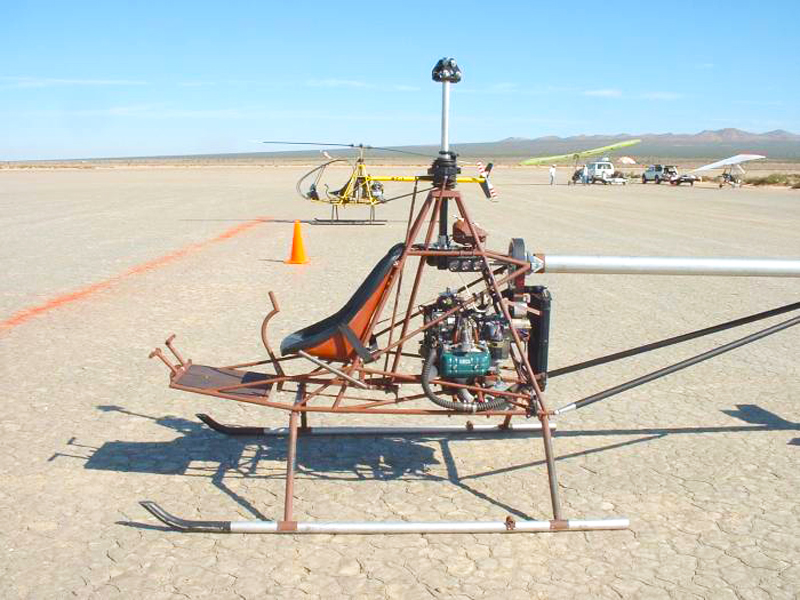 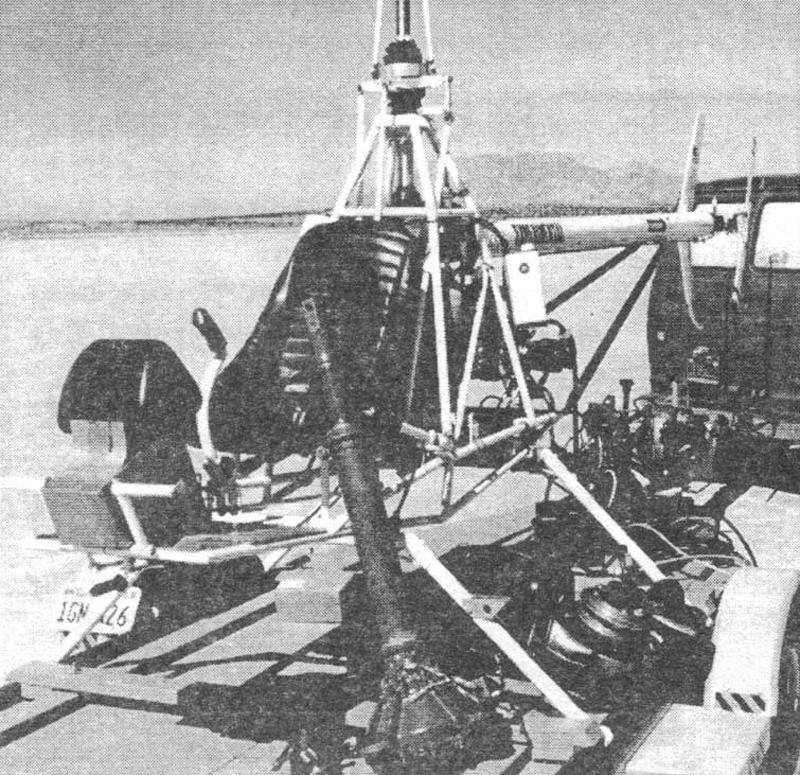 MC1 homebuilt helicopter on trailer at El Mirage. An R22 main rotor gearbox and mast assembly can be seen in the foreground with a turbine engine to the right.

I don’t know where to begin on commenting on this unnecessary incident! Firstly, from reports given, the pilot disobeyed given flying parameters for the day. Then, operating a helicopter with a two stroke – one of the least reliable engines available to power any aircraft.

The chopper was flying “outside” the principle rule of helicopter flight – the DEAD MANS CURVE. To add to that, it seems there was insufficient and very late flaring that could have reduced the severity of impact. Pilots beware, YOU are responsible for YOUR SAFETY!

In this situation you can see there isn’t quit enough height or speed to perform a safe autorotation and the chopper lands extremely hard after finding itself in the “dead mans curve” – collapsing the landing gear instantly. 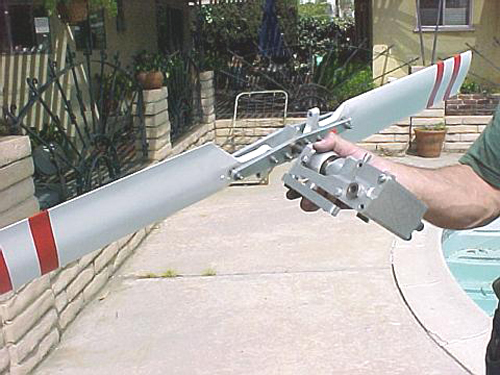 A good reason for designing a safe impact absorbing airframe that can sustain this type of crash, eg; much stronger landing gear that still flexes (or folds) with impact, partial pilot protection with a cabin or other structure and an impact absorbing style seat like used in military applications.

While this video demonstrates what can go wrong, I wouldn’t say it is as common as we would like to think with many homebuilt pilots taking to the skies daily without incident.

It happened at the El Mirage dry lake bed in California, USA. It was NOT his helicopter, he asked a friend if he could try it out. He was instructed to keep it low and slow, below 5 ft as the chopper hadn’t fully been checked out. In the end, I heard that he never offered to help or pay for the damage… not good.

You can see watching the video in slow motion, he’s lucky that he wasn’t killed or loose a limb. As the MC-1 helicopter spun around during the impact, his looks like a rag doll. He came VERY close to some real serious injury!

The pilot – “Kevin”, survived the crash and ended up with only minor scratches (the outer frame, which bend very badly, helped absorb the impact – a testament to the crash-ability of this design). Kevin still flies the MC1 helicopter model, only now with the more reliable and powerful Subaru EA81 four stroke power in place of the two stoke engine originally fitted.

If you listen carefully, you can hear the two stroke engine MC1 helicopter seize up. If you’re going to fly a helicopter with a 2 stroke engine, you should be very practiced at deadstick landings﻿. Apparently that day was VERY HOT (110 degrees F) and we were told Kevin ran the engine too hard, so it overheaded and died.

NOTE: While we see this possibly as an unsuccessful autorotation, not all situations allow for enough time and altitude for the ideal collective down, decent and flair to land like a feather. If you can walk away from it, it’s a successful autorotation. There will never be two situations alike, no matter how long you fly. Hopefully you will never be needing one. So we must pay the pilot some credit in his attepmts to complete a balanced – albeit – crash landing. 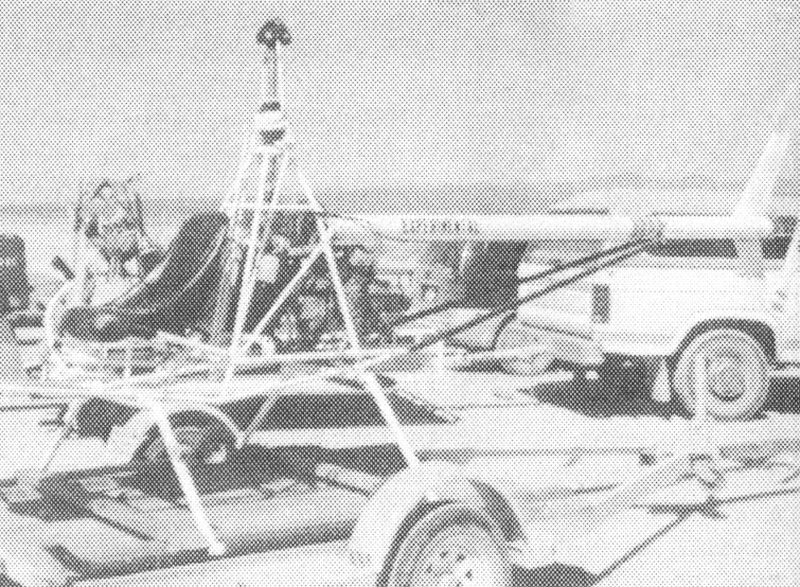