Notar, is it a viable proposition for personal helicopters?

Before we answer that question, let’s look at the nuts and bolts of the NOTAR concept.

Every action has an equal and opposite reaction — or so we were all led to believe from the day we first clapped eyes on a blackboard during our first physics/science lesson. Though a bullet leaving a gun and recoil is maybe the best example to explore, let’s concentrate instead on our own collective interest, the world of rotorcraft.

Unless you have contra-rotating rotor blades or tip jets, helicopters are subject to this basic truth, the reaction to the rotating rotors attempting to rotate the fuselage in the opposite direction to that of the turning blades. (Or, at worse, you could end up sitting there all wide eyed and in awe as the rotor blades tried to stay still whilst attempting to screw you and your pride and joy into the ground — No! no!, I jest, just digressing – – sorreee).

The answer to this problem was some sort of anti-torque device, initially a tail rotor, but with this solution came baggage. There was always the risk of tail rotor strikes, particularly when hovering in confined spaces, and ground personnel were potentially at considerable risk when in close proximity to the spinning blades. There was also a notable disadvantage in military usage, the tail was/is always a good target area for small arms fire (the Taliban, when opposing the Russians in Afghanistan, soon latched onto the idea that a well aimed rock or bullet in the tail rotor’s direction could easily bring down a Mi-24D Hind, helicoptcr gunship). 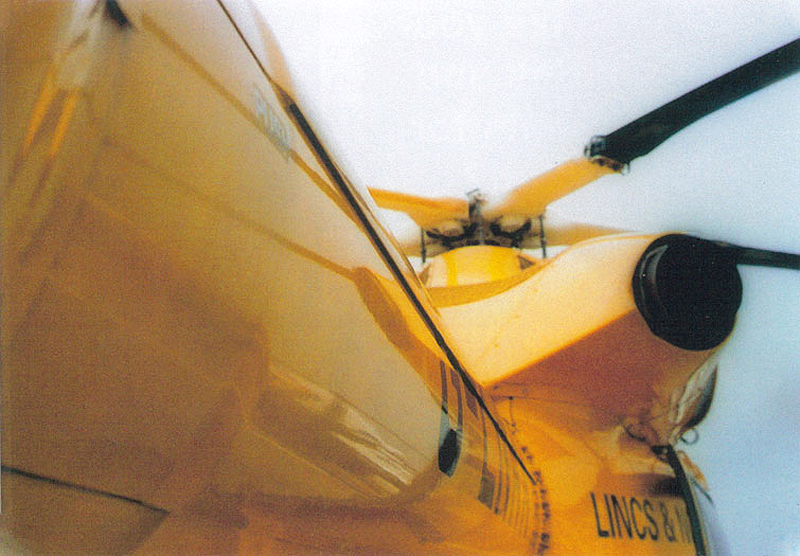 NOTAR Tail Boom Slot – the thin gap along the tailboom

The French company, Aerospatiale, in an attempt to somewhat reduce some of the shortfalls, designed their shrouded, Fenestron tail rotor (see detail photo in the Dynali helicopter link in menu).

While this greatly reduced the risk of impact damage and, to a certain degree, risk to ground personnel, the change still had them whirly things whizzing round at the butt end of the ship.

This adjustment, plus other solutions such as contra-rotating rotors, blade tip drives etc., all worked, but had performance penalties from the energy required to drive these devices. For example, the extra weight of the gearbox and drive train for a conventional tail rotor. This energy used solely for anti-torque could otherwise be utilized in an overall enhancement of the helicopter’s performance. 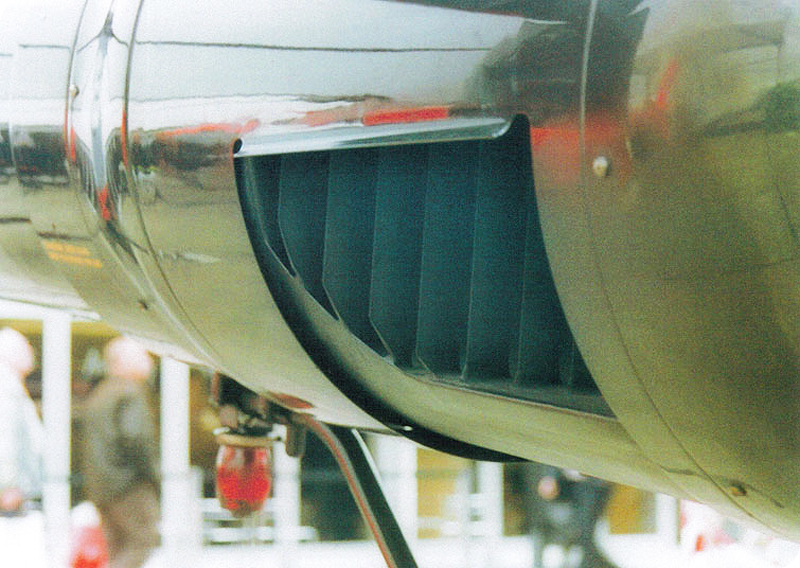 OK, so how do we stick our anti-torque device inside and out of harms way? Well up jumped McDonnell Douglas and off their drawing boards came the NOTAR (an acronym for NO TAil Rotor).

The NOTAR concept first saw practical, and highly successful, testing in a modified Hughes OH-6 helicopter that first flew in this guise on December 17, 1981; the aircraft still bearing its US
Army serial 12917.

So how does this NOTAR thingy work?

Basically, it’s a mixing of two airflows, utilizing the downdraft factor of rotor blades over the helicopter’s circular tail boom, where it mixes with generated air flow that has been directed along the inside of the hollow tail-boom and downwards via an exit slot that is normally situated along the starboard side of the boom.

Where the flows mix, it causes the downwash to adhere to the boom on that side, while allowing the downwash to separate on the other. (This effect can be demonstrated by placing curved back of a spoon into the water flow from a tap.)

In effect, replicating the characteristics of a camber generating lift on an airfoil and in this case, instead of vertical lift, it induced a side force that opposed the dynamic main-rotor torque. The NOTAR tail boom internal air pressure is only around 2.51b/sq inch and is generated by a variable pitch compressor at it’s root, (see photo) which is driven off the engine gearbox; the take-off point being similar to the drive for a conventional tail rotor, but using less energy. The variable pitch maintains a reasonably constant internal boom pressure and subsequently the slot exit velocity is roughly four times the velocity of the rotor blade’s downwash.

This, however, forms just part of the operating system and uses around two thirds of the generated airflow. It is supplemented by the use of a thruster unit at the extreme end of the tail boom that utilizes the other 1/3 rd. This variable thruster supplies the directional control, the thruster unit basically comprising a fixed cone with port and starboard air outlets, over which an internal moveable cone with a single outlet, can rotate – the moveable cone being linked to the rudder pedals. The exiting air follows the direction of rudder pedal inputs and ports the air left or right accordingly for directional control, or blocking both side exits and porting to the rear for forward flight.

This is not engine bleed air, so depletion of engine performance is minimal as a result, just that required to drive the fan. Of course, any air exiting both the exit louver/slot or directional nozzles is therefore cool and thus no risk of burning to any personnel that happen to come within the vicinity of these outlets.

The effective, but rather crude, test bed highlighted several design shortfalls, and modifications were incorporated in 1985 including, at one point, a series of ungainly boom fences and an engine exhaust diverter, in a bid to negate airflow off the fuselage from interfering with the effects of airflow over the boom. Flight-testing of the NOTAR concept resumed on March 12 1986 with the mods incorporated and this stage of testing was completed in June of that year. This helicopter was eventually retired to the US Army Aviation Museum at Fort Rucker, Alabama in October 1990. A showy trick of the prototype was for the pilot to reverse the tail end into the branches of a large bush or small tree, something that was out of the question with a conventional tail rotor.

When McDonnell Douglas acquired Hughes Helicopters, additional research funds and facilities were made available for the concept’s development, and after gaining access to the Hughes wind tunnel in St Louis, it was discovered that rotor downwash was separating from the tail boom before it could reach and mix with the exiting air from the side slot. The test airframe had another slot added higher up the starboard surface of the tail boom and the separation was solved.

From further testing it was deduced that the test fan being used to pressurise the inside of the tail boom (basically a cut down Fenestron) was operating at just under 65% efficiency. The solution was to introduce an improved version of the fan featuring wide-chord blades, which proved to be 85% efficient. 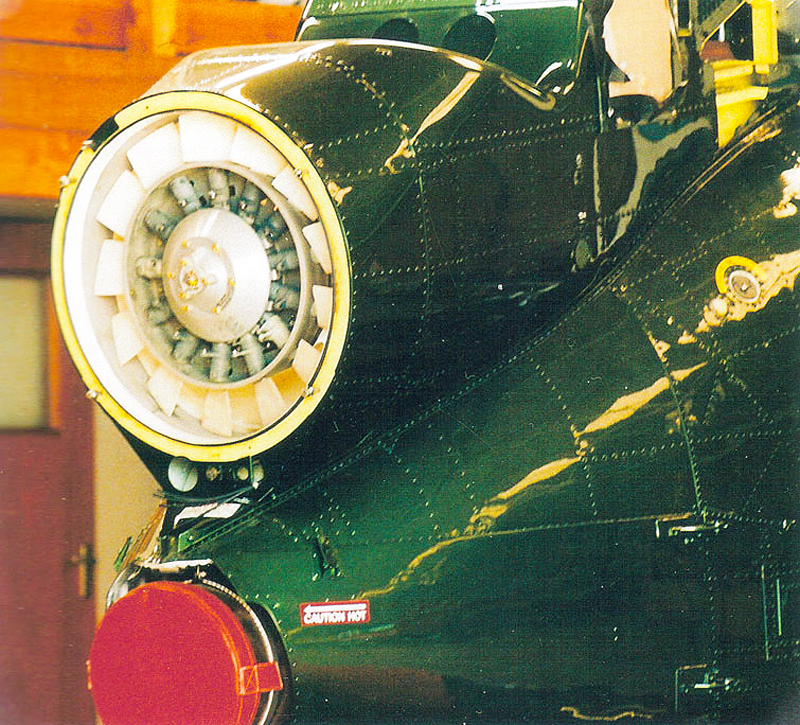 During testing, an unforeseen benefit emerged, that of a significant reduction in pilot workload, which primarily came about through far fewer rudder pedal inputs during hovering and
low speed manoeuvring. In the hover, the pilot increases blade collective pitch for an increase in rotor thrust. With an increase in torque comes an increase in rotor down wash and a subsequent increase in tail boom generated anti-torque side force, making the system self compensating and resulting in virtually no rudder input when maintaining heading in the hover. Other gains include reduced vibration and complexity compared to the conventional tail rotor system and consequently an increase in reliability and maintainability.

Performance over the original unconverted OH-6 used for testing, reportedly improved in every area after conversion and sideward and rearward flight speeds nearly doubled. Of course in today’s world of helping the environment and trying to be ‘green’, the overriding advantage is the appreciable reduction in noise pollution displayed by the NOTAR when comparing it to a conventional tail rotor setup. First commercial adaptation was to take a Hughes 500E airframe and hang the NOTAR system on it. In this guise it was given the MDD designation MD520N (NOTAR).

In addition to the air outlets a large, fixed horizontal tail plane was installed on the upper rear surface of the boom, which has a moveable fibreglass/composite vertical stabilizer at each end.

The left stabilizer is linked to the yaw pedals and has a 30-degree range of movement (more to the left than the right), the right one has a 15-degree movement and is servo operated independently by the pilot via a yaw stability augmentation system (YSAS). This can be switched off from the cockpit and, reportedly, the manufacturer says, is a non-flight critical item. However, in the early days – around 1994 – the UK’s ever cautious CAA placed a (since removed) flight time limitation on the aircraft whenever the YSAS became unserviceable.

Early development of the 520N (NOTAR) was at that time reportedly paving the way for the commercial 10-seat, NOTAR MDX. This helicopter was to feature a composite airframe, an all-composite bearingless main rotor, a grease lubricated transmission and a single-display glass cockpit.

However, approaching 2008, no such animal has evolved which, taking into account the varying fortunes of MDH along the way is understandable, if not a little disappointing for what might have been. The technology could well have filtered down to the light personal helicopter by now, had this gone ahead. 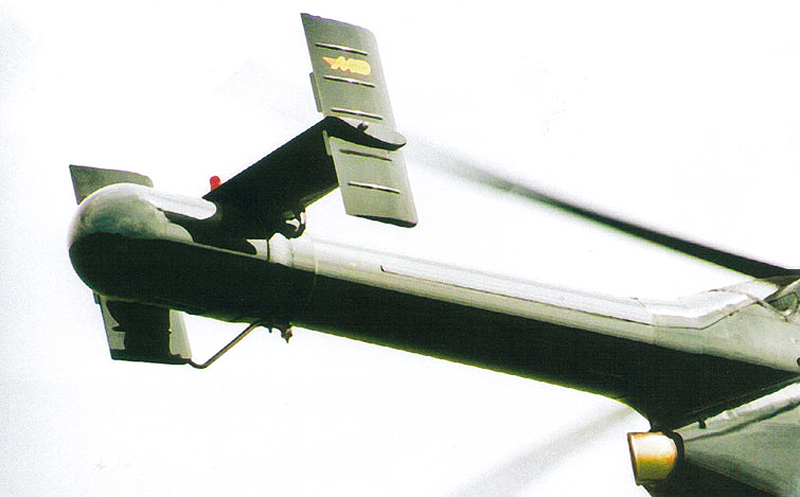 However, in the ’80s, American helicopter manufacturers were reportedly investigating concepts such as NOTAR for the construction of radar-evading ‘Stealth Helicopters’. According to one press report, a classified stealth helicopter was being tested at Groom Lake Air Force Base as early as 1990. The code name being ‘T.E. – K’ (Test and Evaluation Project K) — the F-l 17 was reportedly ‘T.E. – A’.

NOTAR technology was also being evaluated in the then, Soviet Union, where a program was launched by the military design bureau as far back as 1983 for a NOTAR concept helicopter. It was allocated the Mil designation Mi-40. This rather ‘chunky’ machine had obvious military use in mind with a chin mounted cannon and a sliding side door that was designed for carrying of military personnel. A tricycle skid undercarriage and stores mountings either side of the mid fuselage completed the suite. However, when the Soviet Union fragmented into individual states, coupled with their general economic downturn, the program was cancelled.

So how about it?, anyone out there willing to push the personal helicopter envelope forward and come up with a feasible design based on the NOTAR system, or, indeed, is it possible to
downsize this concept to a homebuilt/personal helicopter size machine in the first place?

Interesting thought…Editor’s note: There have been plenty of arguments about belt driven tail rotors vs shaft driven tail rotors. Now here is the hot solution. NO TAIL ROTORS. Get busy out there y’all. It is time to create a NOTAR kit helicopter.

Be the first to comment on "NOTAR – No TAil Rotor Helicopters"