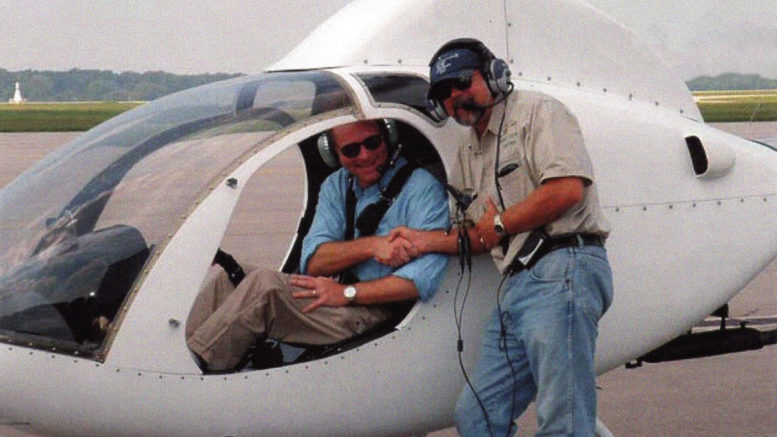 Orv Neisingh leans against a Rotorway ship to congratulate his student.

As I sit down to write this article Sheila and I are in the motor home on our way to California to provide flight instruction for Jan Mensink in his RotorWay 162F. We made a stop in Lake Havasu City, Arizona to visit some old friends before making the final leg of the trip to Jan’s home in Tehachapi, California.

This is my second trip to Jan’s home and at the completion of this flight training segment, he should be soloed to altitude. This will be just the next step in a lifelong dream that Jan has had to build and fly his own helicopter.

Last night we camped next to a couple from Louisiana. The husband is a former helicopter pilot. He told me that he at one time he owned a brand new Jet Ranger. One day he decided to fly a friend to a favorite restaurant that was located down town in a major Louisiana city.

When they landed in the empty portion of the parking lot they were soon surrounded by police vehicles and the Jet Ranger was impounded by the city. It took several weeks to recover the helicopter.

The owner was forced to dismantle it and have the pieces trucked away. He also lost his FAA pilots certificate and was fined several thousand dollars. Make sure that you have permission from the proper authorities before landing your helicopter within city limits. 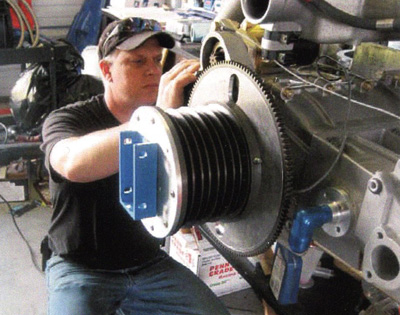 This summer has been quite busy with helicopter flight instructing, attending the Central Sierra Helicopter Meet near Yosemite National Park and both Homer Bell’s Helicopter Meet and then onto the Oshkosh event.

I have also spent a good deal of time working with Andrew Burr on his new VP engine for the RotorWay Helicopters. When Andrew purchased his helicopter, we discussed the stock engine, Andrew told me that the technology was available to make it both reliable and have a TBO in the neighborhood of 1500 to 2000 hours of flight.

We decided to partner on a project whose goal was to develop a new engine for the RotorWay helicopters that would improve both the power output, the TBO and reduce maintenance.

While at the Central Sierra Rotorcraft meet I met Karen Damiata who was RotorWay’s representative. She spoke with Tony Colbert and I about our concerns with the RotorWay product for over two hours. During her tenure with the company, she was a tremendous asset for them.

At the air shows, Andrew did a lot of show and tell with Rotor Way owners about his work at engine improvements. We also met with nine of RotorWay’s representatives to show them some of what we have developed.

They seemed to be impressed and indicated they would appreciate seeing everything that we have developed when we are finished with all of the in-progress systems. It was encouraging to see that the Factory was open to looking at and possibly incorporating new ideas in their ships.

I would like to state that this year I have had fewer in-flight failures than in any of the past 10 years. It shows me that builders are listening and using builders hints that are available to improve the quality of their ship.

If the experimental helicopter owner should take the time to insure that each ship’s system is built to the highest standard possible, the rate of failures and accidents should be drastically reduced. (Editor’s note: Also seeing a reduction would be Orv’s graying hair and requirement for nerve tonics).

As the ships that we fly are built to a standard that approaches or even exceeds the standards for certified aircraft, they prove to be more and more reliable. Issues that have been problems in the past are being dealt with and corrected. On the RotorWay helicopters, the chain drive is history. The factory is now offering the greatly improved AP cog drive system.

We have learned the importance of checking the tail belt tension prior to every flight and to make adjustments as they are needed. The future is looking brighter and I can see we will soon have a way to make our experimental helicopters the fun and reliable machines that we have always wanted them to be.

It is always a joy to attend a fly-in and see many of my former students flying and enjoying their helicopters. I know that in some small way I have contributed to their achieving their dream of rotor wing flight. It is also a great time to sit down with my friend and fellow flight instructor Mark Peterson and share experiences.

Just prior to Homer’s fly-in I traveled to the Charlotte area to provide basic flight training to a proud new owner of a nice RotorWay 162F. It took several hours of tweeking and adjusting his newly purchased helicopter before we began his flight training but once we had it in shape, we began.

While I was there, Justin Travis and Pat Swank dropped in with an invitation for a little flight to a lunch spot, for lunch. Justin and me in his Hughes 500 followed by Pat and Rolin in his R22 BII. The 500 had just completed a very extensive overhaul and is just beautiful.

With prior approval, as it is inside the city limits, we landed in a field behind an IHOP restaurant. On the way back, after a great lunch, Justin allowed me to shoot some approaches, autos and quick stops in his ship, what a blast!! This was just one more example that reminded me I have the best job in the world, flying helicopters and teaching others to do so.

Following Rolin’s training, Andrew Burr pulled in with his RotorWay 162F aka: Frankenstein (named for the conglomeration of unique parts and systems that Andrew has designed and added to his ship). We hooked Andrew’s trailer to the back of the motor home and headed for Homers meet. 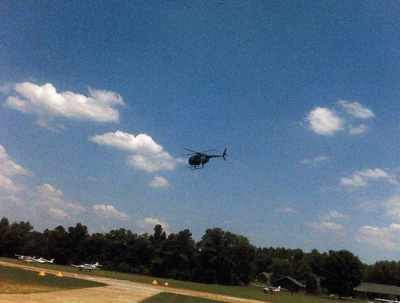 Justin Travis arriving in his Hughes 500 to take us to lunch along with Pat Swank.

At the fly-in Andrew demonstrated his new VP engine that we have been working on for over two years. We have only recently disclosed our project publicly since it’s development is nearly complete.

The design is expected to give much longer intervals between overhauls and fix; once and for all the issues of cylinder to sleeve corrosion, improper rocker arm geometry, shaft mounted valve rocker arms that cannot fall off the valve stem (an issue that has caused problems in the stock configuration).

Nearly every part of the engine replaced with state of the art components designed to give reliability for over 1500 hours of operation. The engine was still in hover testing so we did not take Frankenstein to altitude during the shows.

The RotorWay factory sent two representatives to meet everyone at Homer’s Meet. Both Darrin and Larry spent a great deal of time with anyone who wanted to speak with them. I was saddened to find out recently that Larry is no longer employed by the factory.

At Oshkosh, the RotorWay factory set up a hospitality tent where they provided cold drinks 24/7 and also served breakfast, lunch and dinner to anyone who was either a rotorcraft or an ultralight owner. They must have served 100 people each meal.

The RotorWay factory also paid the entry fees and event passes for anyone who brought a ship to the Oshkosh air show. Karen Damiata and her team did an incredible job of taking care of the RotorWay community at the air show.

I am also saddened to find out that following the air show. Karen left their employ. Following the air shows, it was back to work. Andrew is continuing to test the new engine and the first customer unit is being built for beta testing as I write this article.

If you are the owner of a RotorWay helicopter and have been debating whether or not to keep or sell it, be patient, good things are in the works and it may just be worth waiting a few more months before you make the final decision.

Specializing in maintenance training and flight instruction of Rotorwav Helicopters. 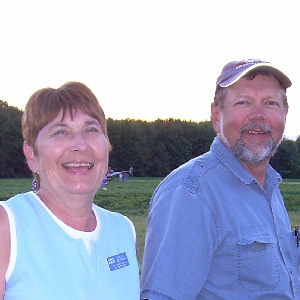 Be the first to comment on "Orv Neisingh – Sho Me Helicopters"