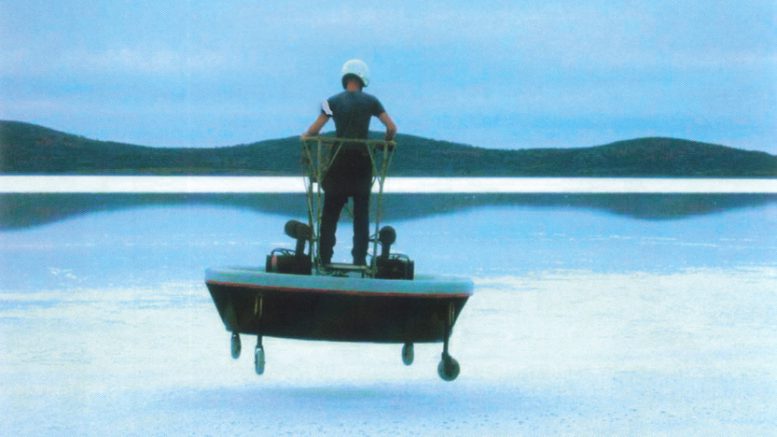 Ben Blakeborough from Sydney has been interested in the Hiller flying platform since he saw brief flying footage of this amazing invention from the 1950’s. This interest has developed into a passion and eventually a full scale flying machine over the last 9 years. Ben is an artist and steelworker who has combined his creative and engineering talents to build this amazing machine.

His early prototype attempts became operational in 1998 when he constructed a smaller Victa lawn mower engined version which was taken to an electronics based Art fair in Austria where over 100 people were treated to a ride as part of the event (this was later stolen from his workshop in Sydney, so its still out there somewhere).

Being so close to the home of Rotax convinced Ben to bring home two 503 engines which were to become the power plants for this full size version.

During this trip he visited the Hiller museum in California, and met the original inventor, Stanley Hiller who had some great information to pass on from his original research and development experiments.

Ben was inspired by the stories of conversations between Hiller and other helicopter pioneers like Sikorsky and Bell, and has converted this enthusiasm into his flying platform which he calls “Winged Self.

The machine uses ducts made by Michael Nell from Nell Fabrications in Nowra NSW and blades from Michael Elines from Heliptra in Victoria, who have both been a great help in the design and build process.

The next stage of the development is to upgrade to bigger motors and to continue with the flight testing regime. This project for Ben is aimed at exploring the connection between man and machine.

As technology advances with fly by wire and other designs, the flying platform still relies on weight shift of the human body for controlling motion. He has no desire to explore its commercial applications , but hopes to be able to develop it into a demonstration vehicle for exhibitions, Art displays and maybe Airshows.