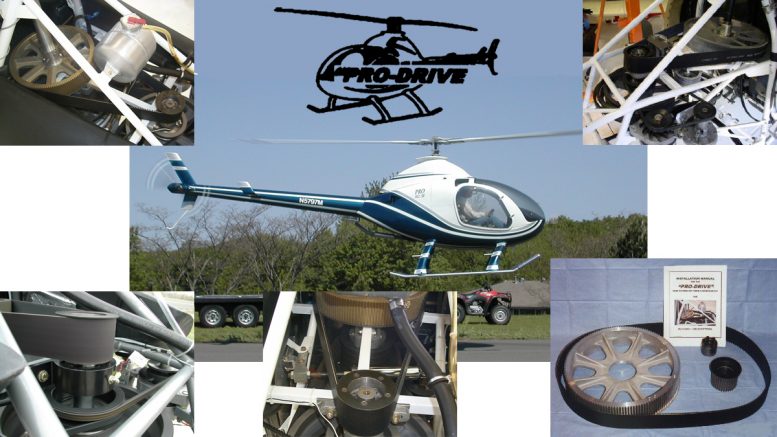 In the beginning, the RotorWay series of helicopters incorporated a chain drive and oil bath to transfer torque from the engine to the main rotorshaft, and it was good. But not good enough according to John Spurling, who provides an after market Pro Drive cog belt drive that has been lauded by many operators who have switched to the Pro-Drive system.

A Different Way to Drive

Although the RotorWay chain drive has proven reliable and no catastrophic failures have been reported, the system requires tilting the helicopter prior to flight and rotating the rotor system to lubricate the chain before startup. Also, the chain has a relatively short life of 100 hours, when it must be replaced at a cost of $289.

Similarly, the front sprocket on the main shaft and rear drive sprocket operate “on condition” but typically have a service life of approximately 500 hours and cost $450 to replace, according to Spurling. (I have cautioned readers in the past that rotorcraft are not cheap to operate, especially when overhaul and component replacement expenses add up.) 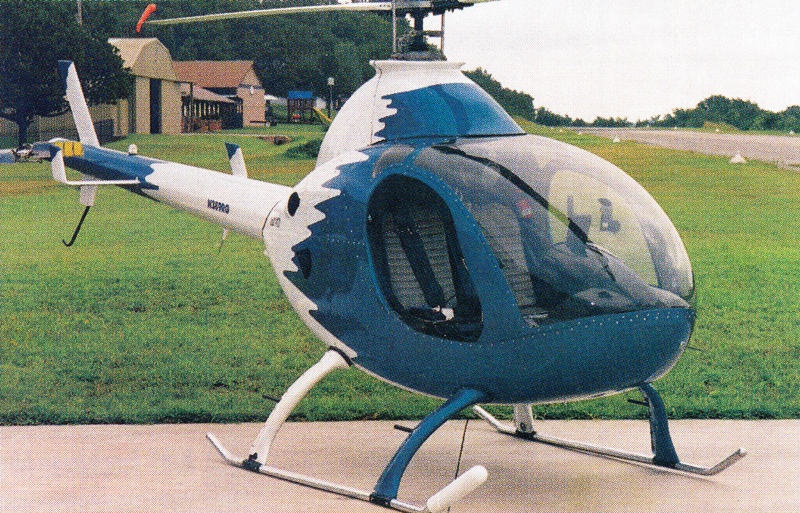 John Spurling has flown his RotorWay Exec 220 hours since April ’98 with a Pro-Drive belt reduction installed. There have been no problems, he says.

When one considers an Exec series operator will pay $5491 for chain replacements in 2000 hours of operations (not to mention the down time hassles every 100 hours), it is easy to understand why more than 100 owners have already invested $2600 for the Pro Drive.

B.J. Schramm, creator and previous owner of the RotorWay series, claims, “This (Pro Drive) is the best single improvement to the RotorWay aircraft since I left RotorWay.” This is no small product endorsement because it was Schramm who designed the original chain drive in the RotorWay helicopters.

Of course, oil on the tailrotor drive belts can create slippage and lead to a host of problems. In fact, during 25 hours of crop spraying operations with an Exec, I was plagued from time to time with belt slippage, and I can assure you it is most unpleasant to watch the rotor rpm decaying when the throttle is fully open.

Spurling’s system comes as a kit that is easily installed “on a weekend” using readily available hand tools. The professional installation manual is well illustrated to ensure anyone can accomplish the task.

As an added bonus, the Pro Drive is 20 pounds lighter than the chain drive, and The Pro Drive belt transmission, which replaces the factory-supplied chain drive, reduces, heat, noise and vibration, the company says.

Spurling claims his Pro Drive system is far more reliable. This of course is supported by RotorWay’s requirement to have the chain replaced on each 100-hour inspection. 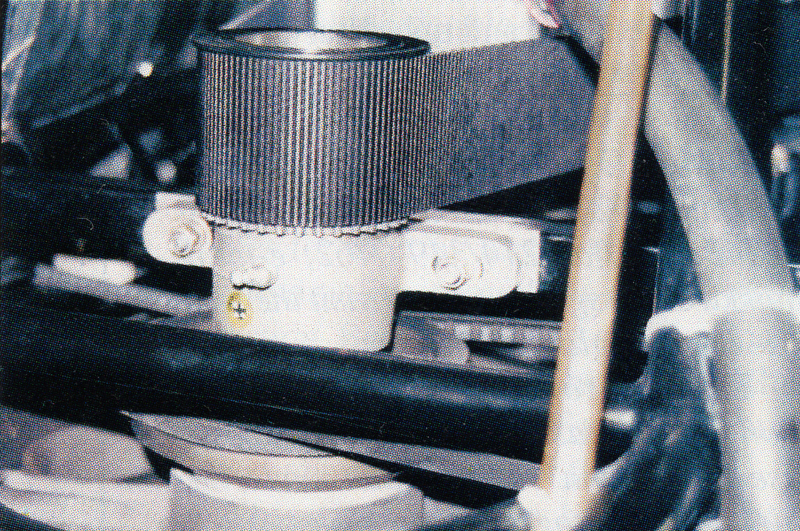 Notes from the Field

Field data is even more impressive as the following improvement claims are being made for the Pro Drive system by numerous operators: Coolant temperature runs 25°F cooler, and the secondary bearing temperature is 50°F cooler.

More important, the oil temperature runs 25°F cooler, and this is a real benefit in the RotorWay, which often pushes oil temperature into the yellow arc on warm days. Pilots further claim there is a “major reduction in cabin noise and vibration.”

Unfortunately, I can’t confirm any of these claims as Spurling’s Exec was grounded during my visit to his facility (a problem not related to his drive). However, discussions with a number of pilot/operators I know personally who fly the Pro-Drive system provided strong accolades for Spurling’s creation.

Pro-Drive owners claim other benefits for the system such as much easier inspection of the drive system, and no oil on components such as drive belts, radiator and exhaust manifold. Of course, oil from the bath dripping onto the hot exhaust could be a fire risk.

Pilots also notice the cog belt system has less friction than the chains, and they assert the autorotative characteristics have improved measurably and they have more effective power for hover and forward flight.

During my interview with Spurling, I could be forgiven for thinking he was a commissioned salesman for RotorWay because he believes so strongly in the basic helicopter.

While many operators are suspicious about third-party add-ons that have exotic performance claims, Spurling and his customers are evidence that the Pro-Drive not only creates significant performance improvements but also provides a high level of reliability and customer satisfaction.

The super success of the cog belt drive begs this question: “If it’s so good, why hasn’t RotorWay incorporated this system on the Exec?” The answer is simple. Spurling has patented it.

Besides, according to Spurling, RotorWay experimented with a different type of belt system and it was a failure so they gave up. He claims the company does not want to give up its lucrative sales of chains and sprocket replacements.

As is typical of any kit manufacturer, RotorWay does not officially endorse Spurling’s drive. While RotorWay preferred not to comment on the drive, when pushed, a company official said, “It is RotorWay’s position that this system does not address all the potential problems that could arise in flight.”

“We do not feel this system is proven and, therefore, cannot endorse it as an aftermarket addition to our product line.” While it’s easy to understand this position, one RotorWay dealer, who preferred not to be named, confirmed he installed a Pro Drive in his own helicopter quite some time ago and is delighted with its performance.

I don’t wish to undermine RotorWay, but it would appear the Pro-Drive is a quantum improvement over the standard issue chain. I need to point out one caution. While your RotorWay is under any form of warranty, you should think carefully about installing any unapproved aftermarket system until the warranty has expired.

Perhaps new RotorWay pilots should operate with the factory chain system until they have nearly reached the 100 hour TBO so they have a base line for comparison before converting to the Pro-Drive. Then you might have the best of both worlds — or perhaps just an oily engine bay. 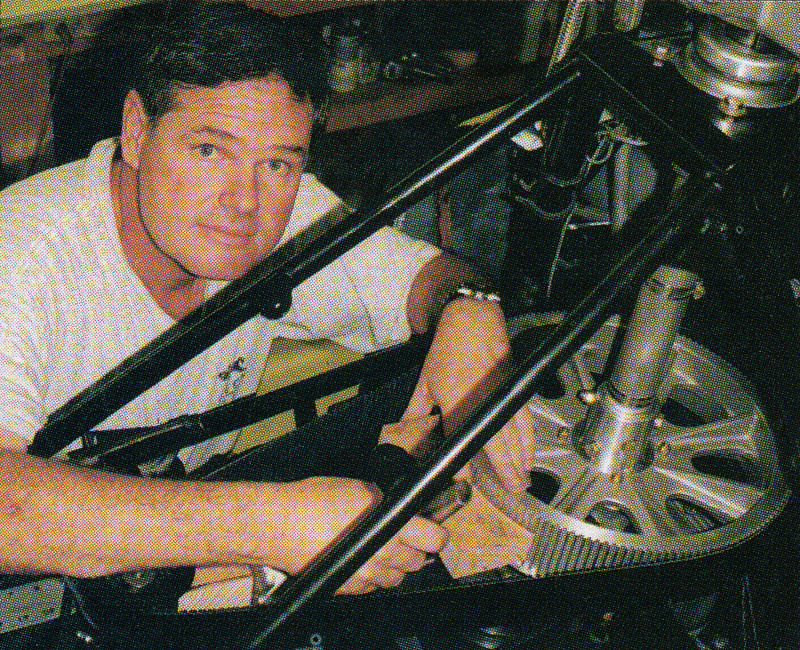 Spurling adjusts his popular cog belt drive. His Exec is 20 pounds lighter with the Pro Drive and runs cooler and more reliably, he says.

EDITOR: Rotorway were later to adopt this modification as standard equipment in their later kits before finally moving to the latest version sporting a typical right hand main rotor gearbox in their current RW7 helicopter model. 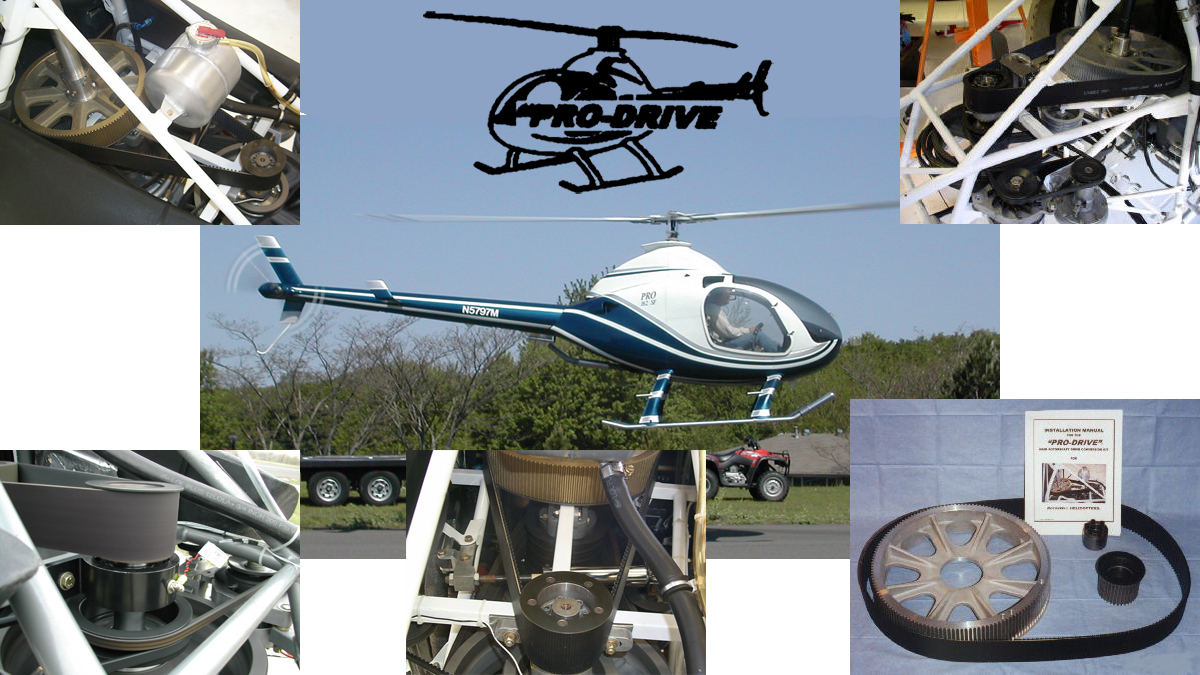 Be the first to comment on "RotorWay Pro Drive Belt Modification"