From Foot Safaris to Helicopters: 100 years of the Davis family in missions by iUniverse.com 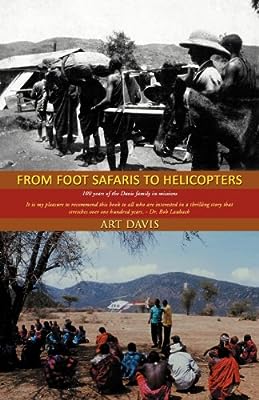 Price: $14.95
As of 2020-08-06 06:28:31 UTC (more info)
Product prices and availability are accurate as of 2020-08-06 06:28:31 UTC and are subject to change. Any price and availability information displayed on http://www.amazon.com/ at the time of purchase will apply to the purchase of this product.
Availability: In Stock
Click and Choose Options
Available to ship in 1-2 days.
Product Information (more info)
CERTAIN CONTENT THAT APPEARS ON THIS SITE COMES FROM AMAZON SERVICES LLC. THIS CONTENT IS PROVIDED 'AS IS' AND IS SUBJECT TO CHANGE OR REMOVAL AT ANY TIME.

Redback Aviation are delighted to present the famous From Foot Safaris to Helicopters: 100 years of the Davis family in missions.

With so many on offer these days, it is good to have a name you can recognise. The From Foot Safaris to Helicopters: 100 years of the Davis family in missions is certainly that and will be a great acquisition.

For this reduced price, the From Foot Safaris to Helicopters: 100 years of the Davis family in missions is highly recommended and is always a regular choice with most people. iUniverse.com have included some great touches and this results in good value for money.

Dr. Elwood Davis and his other half Bernice arrived in Mombasa, Kenya in January 1911 as medical missionaries with the Africa Inland Objective. This book showcases letters, diary entries and unusual photographs showing the tale of God's modest servants laboring to share the truth about Jesus Christ in Africa. Their grandson, Art Davis, has actually combed through the family archives to produce this book. The first section tells the pioneering tale of Elwood and Bernice Davis in Ukambani and Kijabe. The second part reveals the following generations in Kenya - Linnell and Martha Davis and their four kids, Van, Art, Ray and Alan. The book, which periods 100 years of God's loyalty to the Davis clan, focuses on objective work in Africa but also tells of various member of the family working as missionaries in South America.

Art Davis, well-known for his capability to spin a tale, offers a lot of busy adventures in this book from his years as a child in Africa - facing rhinos in the shrub - to his family's time among the Pokot individuals in the Rift Valley. From Elwood Davis's foot safaris in the shrub to Art Davis's helicopter trips in northern Kenya, the function of the Davis family in Kenya for 100 years has actually stayed the exact same: to serve a faithful God and point others to God's conserving grace.

Buy it Now
See more From Foot Safaris to Helicopters: 100 years of the Davis family in missions by iUniverse.com on eBay