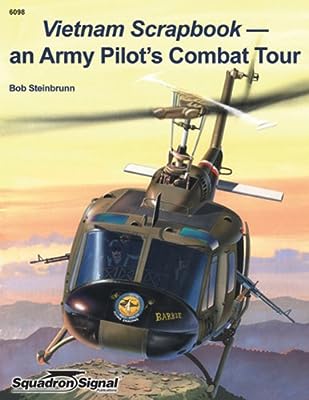 Price: $19.95 $7.96
As of 2020-10-27 20:54:41 UTC (more info)
Product prices and availability are accurate as of 2020-10-27 20:54:41 UTC and are subject to change. Any price and availability information displayed on https://www.amazon.com/ at the time of purchase will apply to the purchase of this product.
You Save: $11.99 (60%)
Availability: In Stock
Click and Choose Options
In Stock.
Product Information (more info)
CERTAIN CONTENT THAT APPEARS ON THIS SITE COMES FROM AMAZON SERVICES LLC. THIS CONTENT IS PROVIDED 'AS IS' AND IS SUBJECT TO CHANGE OR REMOVAL AT ANY TIME.

We are proud to present the fantastic Vietnam Scrapbook - An Army Pilot's Combat Tour - Squadron specials (6098).

With so many available recently, it is great to have a make you can recognise. The Vietnam Scrapbook - An Army Pilot's Combat Tour - Squadron specials (6098) is certainly that and will be a perfect buy.

For this reduced price, the Vietnam Scrapbook - An Army Pilot's Combat Tour - Squadron specials (6098) comes highly recommended and is always a regular choice amongst most people. Squadron/Signal Publications have provided some great touches and this results in great value for money.

In January 1966, Robert Steinbrunn got in the US Military for 4 remarkable years. At Fort Rucker, Alabama, he received training in Bell helicopters, including the Huey and Iroquois (UH-1A, B and D versions). Later, he was sent out to Fort Knox, Kentucky, where he was designated to A Troop, 7th Squadron, 17th Air Mounties, the 'Ruthless Riders', flying the short-cabin Bell UH-1C gunship. After refining their reconnaissance skills in training, the 3rd and 7th Squadrons became the 'eyes and ears' of the Fourth Infantry Department, which was based at Camp Enari, Pleiku, in the Central Highlands of Vietnam. Steinbrunn recorded his time flying helicopters in Vietnam and has assembled his memories into an unforgettable book. Illustrated with more than 200 photos. 80 pages.