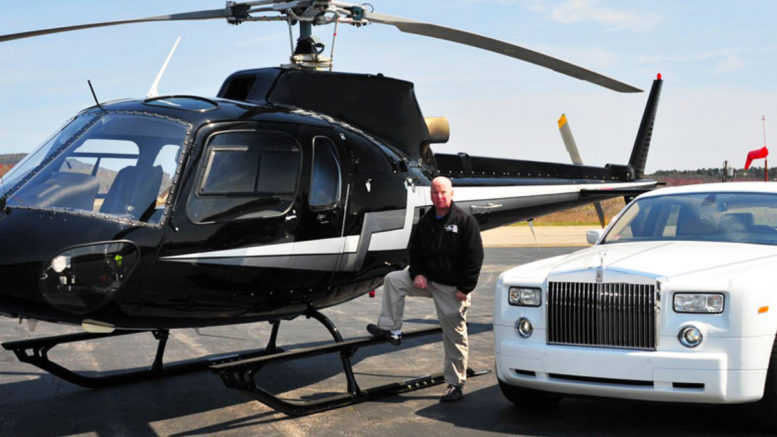 To the average pilot, the helicopter is a kind of bastard machine, sharing his airspace and occasionally his landing fields while defying the laws of aerodynamics that govern fixed-wing flight.

Choppers are expensive, difficult to fly and not too many years ago even the experts predicted that widespread commercial application of helicopters was, at best, a pipe dream. No more. 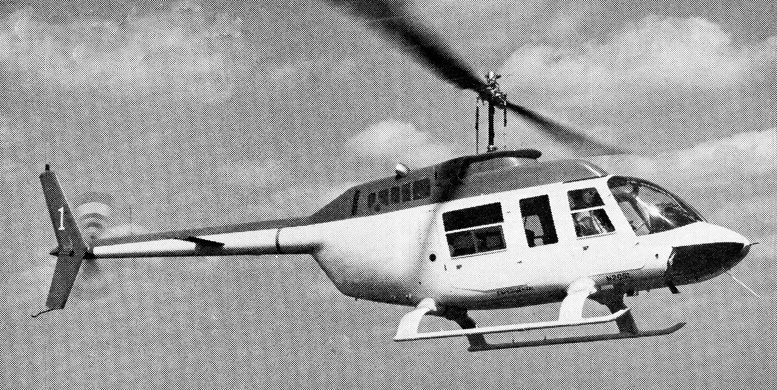 If general aviation has made great strides in the past decade, the advances in helicopter technology — and in turn its acceptance as a useful transportation machine-have been nothing short of sensational.

Today the helicopter is simply one more transportation vehicle deserving of serious consideration by businesses and corporations in their effort to turn time into money.

It is the long-missing link in transportation, the vehicle that can take its passengers anywhere at all; that can speedily and comfortably deposit them in places that even a four-wheel-drive jeep cannot reach; it can jump over traffic jams, move heavy and ungainly cargo from one place to another, act as taxi or truck or crane or observation platform, and do it all reliably and with dispatch.

It is little wonder then that businesses, having accepted air transportation in company-owned airplanes as standard practice, are more and more eagerly looking to the helicopter to add that extra dimension of mobility.

But helicopters are still expensive, both to buy and to operate. Any businessman should closely examine their capabilities and limitations to make certain that his machine is economically sound for his particular needs. 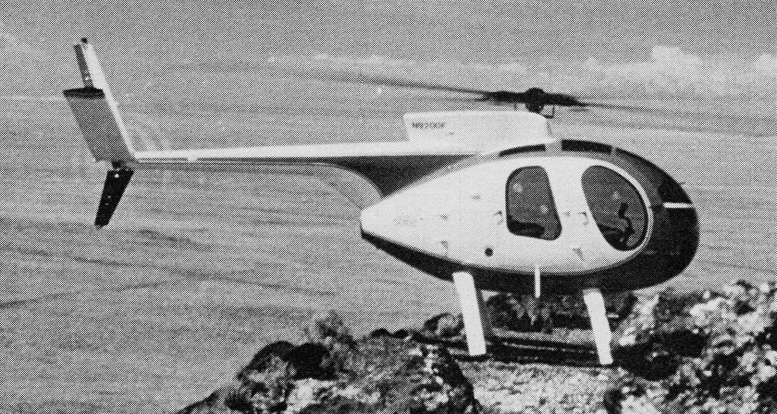 A glance at the chart below shows that 1975 prices, ranging from $45,000 to $2 million-plus, have no relationship whatsoever to either speed or range. Obviously, with speeds ranging from 87 to 142 knots covering ranges between 190 and 750 nautical miles, the helicopter can never be thought of as a replacement for fixed-wing aircraft.

Here are a few examples: The Lowes Companies, headquartered in Hickory Hills, North Carolina, operate a fleet of MU-2s and twin Cessnas to move people between its various business locations in the eastern two-thirds of the United States.

Its offices in Hickory Hills are only a few miles from the airport, but at certain, often critical times of the day (especially during the hours when children go to and from school) the trip to and from the airport by automobile can take as much as a half hour or more.

When this wasted ground-transportation time was added to the profile of say, a 300-mile trip in an MU-2, the portal-to-portal speed was reduced quite drastically.

The acquisition of a five-place helicopter changed all this. Now the trip from the office to the airport takes only five minutes or so and the time-efficiency of the fixed-wing fleet has been vastly improved.

American Fuels Corporation, an Albuquerque company involved in energy and mineral exploration in the Rocky Mountain states, operates three MU-2s and a Hughes 500C turbine helicopter. For this company the problem is a different one. Ground transportation from the corporate office to Albuquerque’s International Airport is no major problem.

On the other hand, the need to transport geologists, scientists and customers from the destination airport to the frequently inaccessible mine and exploration sites would involve torturous trips in four-wheel-drive cars and uncomfortable pickups. To avoid this, the company frequently sends a pilot with the helicopter ahead.

It will then meet the MU-2 at the destination airport and fly the passengers to mountain tops or into hidden canyons. In addition, the company uses the helicopter to stake mining and drilling claims in a matter of hours, an operation that, by ground vehicle, could take one or more crews several days.

The journey from its Manhattan skyscraper headquarters to the airport takes close to an hour when there is no; traffic, but under heavy-traffic conditions, normal for that area, this time can easily increase to two hours.

The company’s executives found that they either had to leave home at some ungodly hour in the morning, or had to go to White Plains the night before and stay in a motel to put in a full day’s work the next day. The Bell JetRanger changed all that.

It can drop into any one of the various heliports along the rivers in both midtown and downtown Manhattan, pick up the passengers at a reasonable hour and get them to the airport in minutes. Johns-Manville Corporation, when it moved its headquarters from New York to Denver, located some distance south of downtown Denver.

This company, too, added a Bell jetRanger to its aviation fleet to shuttle execs back and forth to its mini-fleet of G-IIs. Again the distance to the airport, where its two G-IIs are hangared, is too great, in spite of an excellent freeway system.

Among the business helicopters used primarily for people-moving, the most popular are the Bell JetRanger and the Hughes 500, both turbine machines, and the piston-engine Enstrom F-28A, with the speedy Aerospatiale Gazelle, a French-built turbine helicopter, beginning to catch on.

One of the most obvious reasons for their popularity is style — with their streamlined cabins and acceptably comfortable interiors, they simply look like vehicles designed for executive transportation.

For too long many helicopters had looked like some flying Erector-set contraptions with all their structure and insides hanging out in full view. For years economic factors had been the major deterrent against acceptance of helicopters for executive transportation.

The initial cost is high, especially on a per-seat basis. The miles-per-gallon figure is low, even in the most economical models, and adequate insurance has been expensive and hard to obtain. In one way or another, all this is changing.

Companies have become used to paying high prices for air-transportation machines. The dearth of executive talent has increased the price tag put on time. Insurance has become cheaper and easier to obtain as the helicopter safety record has improved. 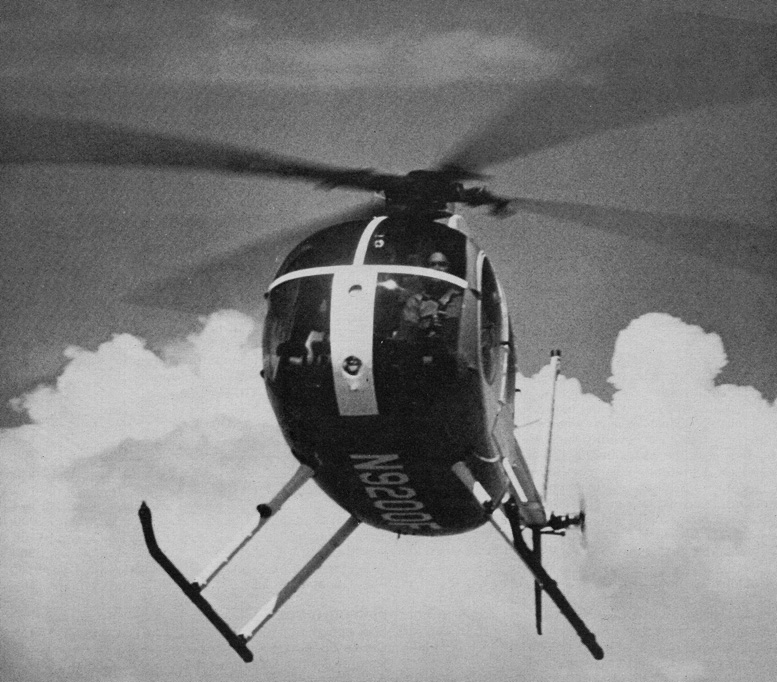 In addition, helicopter pilots, once few and far between, have returned from Vietnam in huge numbers. The increasing popularity of corporate helicopters and the growing understanding of their varied capabilities are today producing some new problems.

Helicopters have traditionally been thought of as VFR machines, and so far the FAA has turned a deaf ear toward attempts to establish IFR certification for rotor-wing aircraft (except in a few cases under very special and expensive conditions).

Still, helicopters operate extremely well in all types of weather and, when properly equipped, the potential for IFR operations is virtually unlimited. Sophisticate d autopilots, RNAV, VNAV, microwave landing systems and global navigation systems such as the Ontrac II permit precision point-to-point navigation even in the most remote areas.

All this will take time, but there can be no doubt that as demand increases, the FAA will be forced to accept helicopters into the IFR ATC system. 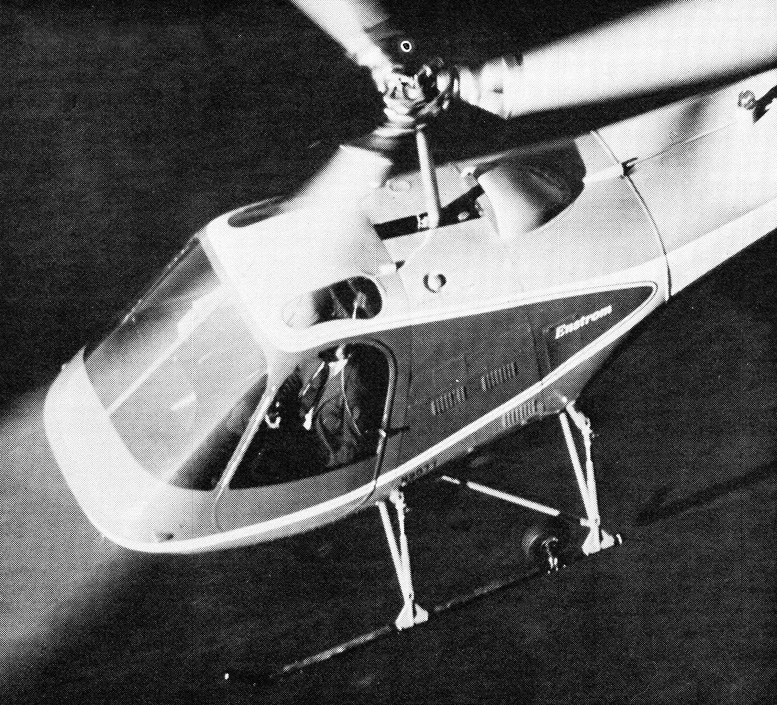 The fact is that in today’s competitive economy even relatively small companies, having learned to count on corporate air transportation as a necessity rather than a luxury, will find that only the helicopter can produce a solution to the bottleneck that is invariably created by the need to move people and cargo from the airport to the final destination.

Aware of this, Enstrom has increased production of its low-cost F-28A by 70 percent in 1973 and doubled that total in 1974. Hughes reports that it continues to find customers for its piston-powered model 300.

While none of these are currently available in this country, there can be I no doubt that as the demand increases, these manufacturers will realize the immensity of the U.S. market potential, and we are very likely to see them compete for a share of that market.

Helicopters have clearly become an essential and permanent ingredient of the business and corporate aviation industry and they will doubtlessly experience a growth that is unmatched even by the booming fixed-wing aviation industry. 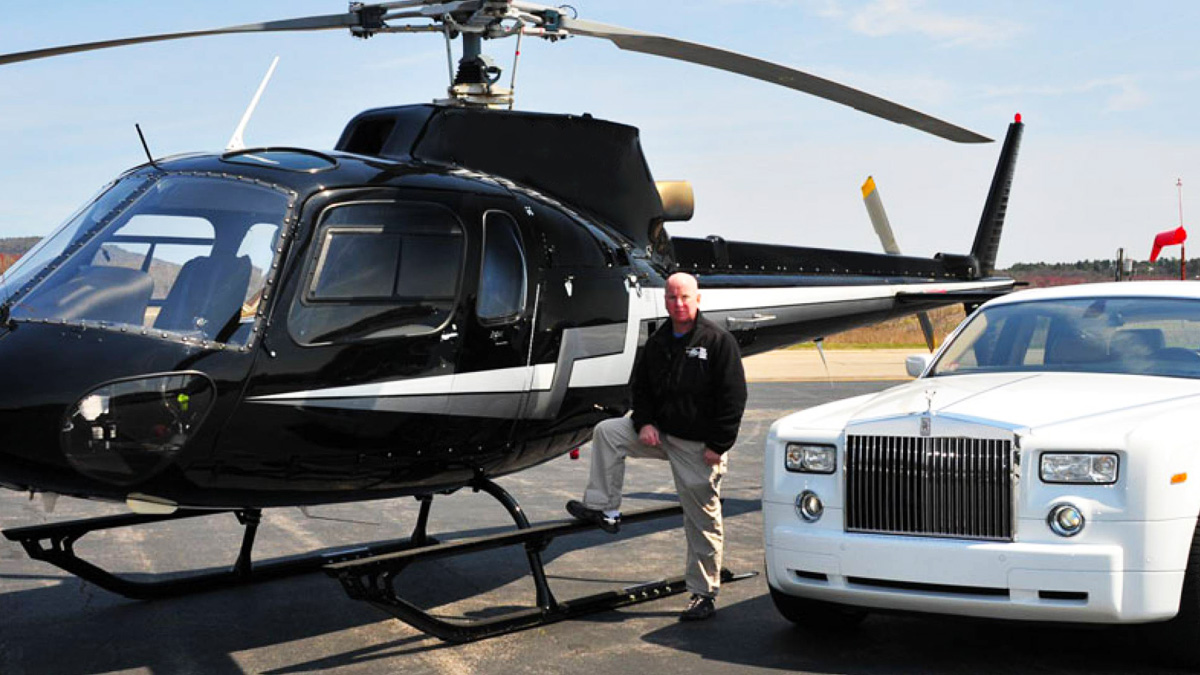 Article Name
Straight Facts About Strait Up Flying
Description
How helicopters got their reputation as executive transporters, and lead to the Naming of the Rotorway Exec. Flying company executive around the country in jets was about to move forward into rotary wing transport - straight-up flying.
Author
Paul Garrison
SHARE TWEET PIN SHARE