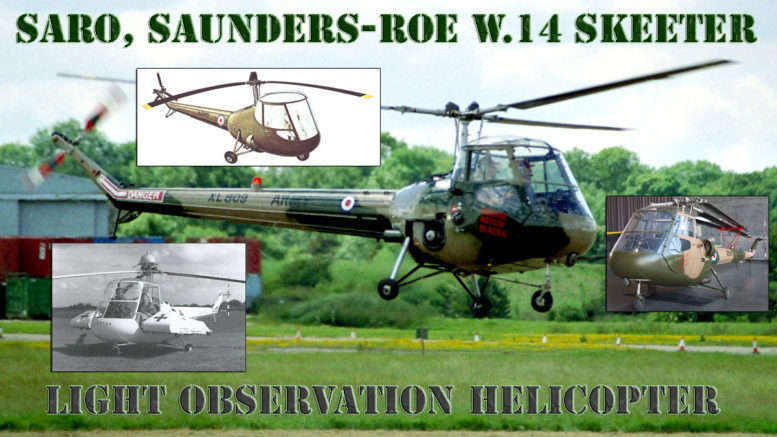 Just to prove what goes around comes around, the Cierva Autogiro Company in 1948 set out to design a two-seat helicopter for the personal helicopter market that would be both cheap to buy and operate – sound familiar?

The company came up with the Cierva W.14 Skeeter 1 (G-AJCJ), which first flew from Eastleigh, Hampshire, UK on October 10th 1948, powered by a 106-hp Jameson, four-cylinder, air cooled, FF-1 engine. It was forecast that the production version would be offered for sale at UK£3,000.

The Skeeter Helicopter by Cierva Autogiro Company at its 60th Anniversay display.

The prototype W. 14 Skeeter 1 was used in the numerous development trials and after these were exhausted, it was broken up in November/December 1952. The Skeeter 2 first flew at Eastleigh on the October 15, 1949 and despite valiant attempts to cure the intermittent ground resonance problem, the aircraft shook itself to pieces on the ground at Eastleigh on June 26th 1950.

This aircraft (G-ALUF) was slightly larger, with a 145-hp DH Gipsy Major 10 engine and an increased rotor diameter and a slightly longer tail boom, of circular, instead of triangular, cross section.

Saunders-Roe Ltd, having specialized in the construction of fixed wing aircraft that saw the development of the experimental SR/A1 flying boat jet fighter, and the huge 10-engined Princess flying boat, decided it would like to get involved in the developing rotorcraft market.

Another Skeeter at the same celebration.

Thus it was that the Saunders- Roe Helicopter Division was formed on January 22nd 1951. When the new­ born company took over the premises, design commitments and technical staff of the Cierva Autogiro Co, Ltd it had a kick-start in that market place.

The first design the new company focused on was the Skeeter. Two Mk3 aircraft were already being built by Cierva to the UK Ministry of Supply specification A13/49 and these were completed for evaluation for the army, while one Mk4 was completed for potential Naval use.

Originally powered by the 145-hp DH Major 10 engines, Saunders-Roe re-engined the Mk3s with the same 180-hp Cirrus (Mk3B) Blackburn Bombardier 702 engines that were used in the single Mk4. It was around this time that Saunders-Roe shortened the name to SARO for marketing purposes. 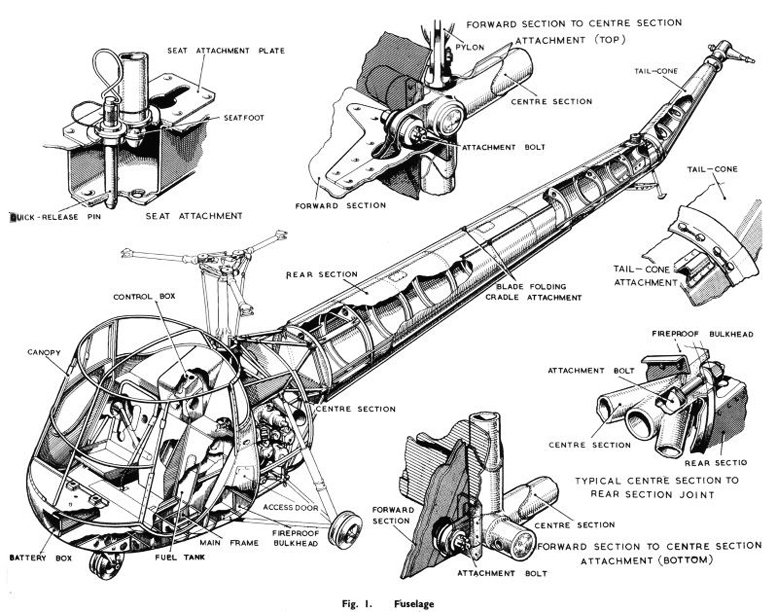 The Mk5 followed and two prototypes were built as a private venture by SARO; they were the first machines free of the earlier resonance problems that beset those early prototypes resulting in airframe and aircrew loss. (In 1956, the Mk 5s changed to the 200hp Gipsy Major 201s).

The UK government then sponsored three 183-hp Gipsy Major 30 powered Mk6 prototypes for pre-service trials, the first taking to the air on 29th August 1954. Following these trials, production orders were placed by the MoS for Mk6As, with Gipsy Major 200 engines on behalf of the UK Army Air Corps as the AOPMklO (AOP – Air Observation Post) and Mk6Bs as the TMkll for the RAF (Royal Air Force).

Later, follow-on orders were placed for Skeeter Mk7As (AOP Mkl2) and Mk7Bs (TMk 13), the main difference being the slightly more powerful 215-hp gipsy Major 215 engines. The AOP 12s served mostly with the Army Air Corps Training School at Middle Wallop (and overseas duties with same), while the RAF T.13s were shared between the Central Flying School and No 651 Squadron.

The Mk7 also became the subject of the type’s only export order (though some of the German machines passed onto the Forca Aerea Portugesa in July 1961), when the Federal German Army (as.Mk50) and Navy (as Mk51) ordered 15 machines.

Final variant, the Mk8, was basically an adaptation of the Mk7 as a commercial, civil version, with three being manufac­tured for certificate of Airworthiness tests. However, no civil orders ensued and when Westlands took over the company in 1960, production of the Skeeter was terminated with a recorded total of 88 machines (though some sources quote 77).

A casualty evacuation version was also built, with a stretcher pannier mounted on either side of the cabin and featuring the Napier NRE19 peroxide rocket-powered tip drive system. The extended development period for the Skeeter spanned some 10 years before the aircraft finally started its mili­tary service career in 1957. One is led to wonder if the project ever made any money for the company’s coffers.

LEFT: The Mk8 G-APOI
RIGHT: Cockpit view of the MK8

A rather ungainly looking aircraft, the Skeeter resembles a tadpole, with the large roomy cockpit (that exhibits a remark­ able 360-degrees visibility) and cowling shrouds – which in no stretch of the imagination can be described as aerodynamic – bolt­ ed onto the front of a long, stabilizer-less tail boom and the three­ wheeled landing gear.

Reminds one of the transition of a legged tadpole just before it absorbs it’s tail to emerge as a young frog. Not surprising it picked up the nickname ‘Flying Tadpole’. Despite being under-powered, the Skeeter was reported­ly highly responsive and incredibly smooth to fly.

Originally fit­ ted with a rather inefficient and expensive cartridge starter in magazines of six, it was more often than not the second or third cartridge before the engine would fire up. The record is believed to be in excess of 100 attempts, when a Skeeter operating under extremely cold conditions in Germany in 1962 was preparing to demonstrate the ‘helicopter experience’ to a VIP.

Unfortunately, in the middle of the cartridge fiasco, one of the doors blew off and the VIP went walkabouts, apparently having adopted a lifelong distrust in, and great dislike for helicopters.
Several Skeeters were acquired by helicopter enthusiasts/pilots and due the rarity and thus difficulty in acquiring car­tridges, most of these machines were converted to electric start, which proved a much more reliable system.

When landing, a small forward movement had to be input into the aircraft, as a direct downward landing tends to splay the wheels outwards, which can be detrimental to both the wheels and I or the oleo legs – to say the least.

This is of particular impor­tance when alighting on a hard surface, due to the potential added problem of sympathetic resonance between rotor and airframe, whereupon the rotor centre-of-lift migrates off center as one blade drags more than the other two.

In extreme circumstances, within a matter of a few seconds, you could well be found by rescuers awe struck and wide-eyed, albeit unhurt, atop a large pile of scrap metal, muttering those all too often heard profound words – “what happened?” You also had to remember to apply landing gear brakes pretty sharpish after landing, to prevent the machine declaring independence and meandering off on it’s own particular chosen path across terra firma.

Due to the power plant being an English engine, the blades turn clockwise – opposite to those of our close cousins across the pond. This resulted in a definite tendency to pull left on lift-off and a small, noticeable, slight drop to the right. However, despite this, even under extreme wind conditions, there were no problems in fully controlling the Skeeter.

Though one had to remain mind­ful of staying ahead of the machine at all times, lest it snuck up and nipped you in the butt. Later versions of the Skeeter Mk2s utilizsed ‘spiders’ on the rotor mast in place of the conventional swash plate.

These are basically arms attached to the leading edges of the main rotor blades and anchored at the other end to the cyclic pitch control axle that transmit and input change in the pitch angle. Up until the 1990s, I believe that this innovation had only been used on British machines and most likely so today.

During long-term repairs to one of the 25 survivor’s gearbox and a major service, as well as detailed engineering work on the others, it was revealed that there were problems relating to the fatigue life of several key compo­nents, including the rotor blades and the transmission.

Unfortunately, during the transition from SARO to Westlands, detailed records of test­ing by the manufacturer that would have provided the necessary data were lost or trashed.

It is far too big and costly a task for the few remaining airworthy aircraft’s owners to undertake and conse­quently, late in 2007, the Ministry of Defence grounded the Army Air Corps Historic Flight example and the Civil Aviation Authority has suspended the Permit to Fly for all the civil regis­tered machines.

A sad ending, as moves were afoot to return several more of the type to airworthy state, and much cash and time investment had been made by their owners in engineering work, repairs & components — Oh for an experimental category for air­ craft here in the UK.

All the organizations in the UK are wrapped up in approving the various ‘plastic’ planes now coming out of Eastern Europe and apart from the MT-03 Autogyro and the Rotorway Exec/Talon, non-commercially produced rotorcraft seem to have become the poor relation.

All this the year before a historic gathering of Skeeters (albeit by road/trailer) at Eastleigh Hampshire, UK, just down the road from where the aircraft were built, was held on August 3rd 2008, to celebrate the aircraft’s 60th Anniversary. I attended a gathering where the sole surviving Mk8 was handed over by owners, Chamberlain Trust, donated to the Solent Skys Aviation Museum.

Though beset with torrential rain, there were several thousand visitors to view the aircraft present. As well as the four Skeeters present, there were a number of other historic and mod­ern machines on show.

LEFT: All three blades stowed aft.
RIGHT: Right hand of engine view with the “cans” off.

Now More of that Technical Stuff

The Skeeter is a small, skinned, steel tube fuselage structure with a semi-monocoque tail boom section.

A three-bladed main rotor constructed with metal spars, wooden ribs and a fabric skin, with a two-blad­ed wooden tail rotor (3-bladed on the prototype).

The transmission for the main rotor is through a spur gear to intermediate shaft driving a final bevel. 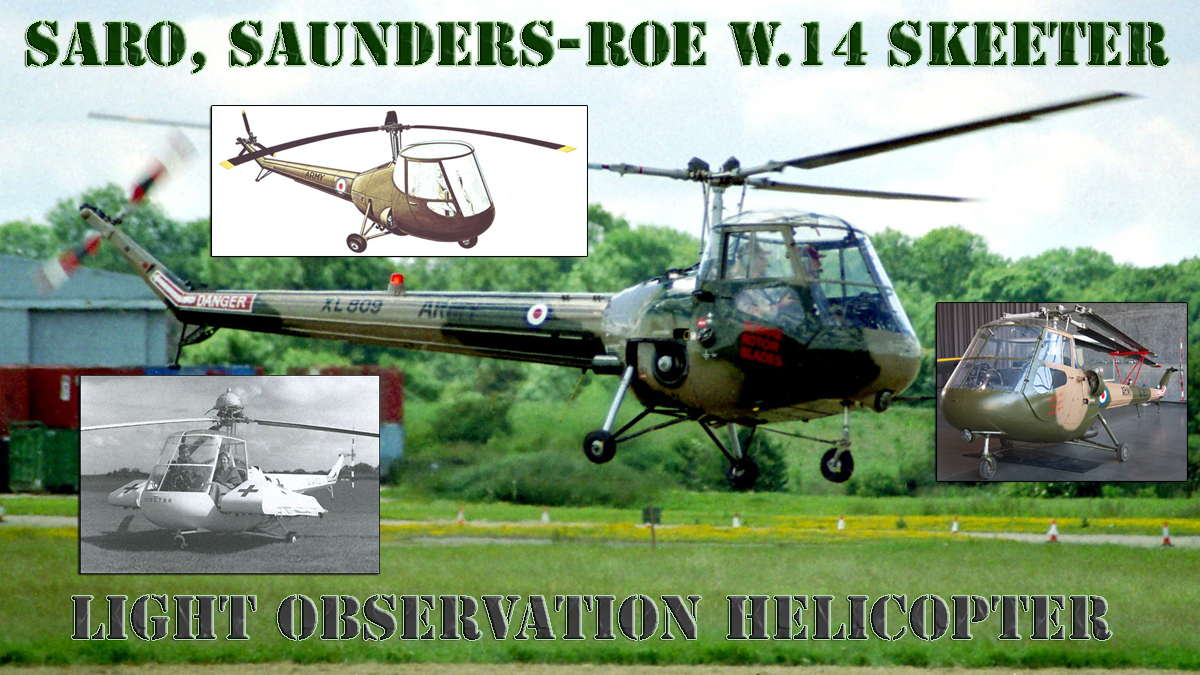 Be the first to comment on "Tadpoles Really Can Fly"