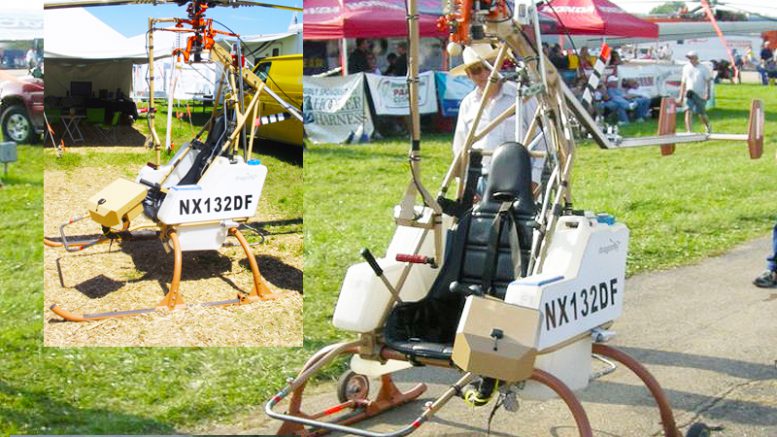 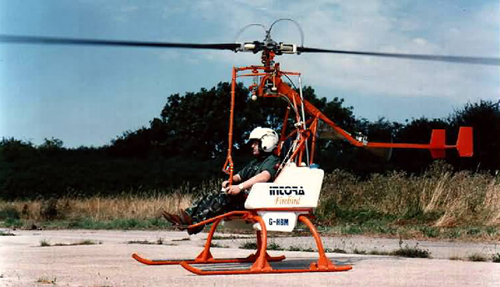 The Mini-copter was originally conceived as a man-carrying platform for use by the military. Its use was intended to be for Army Special Forces and to retrieve downed combat pilots from behind enemy lines.

The project was originally funded by the U.S Navy and a working model was developed, but due to the end of the Vietnam conflict the requirements for retrieving downed Navy pilots came to an end.

Development continued by the designers and the Army Special forces developed an interest in the tiny craft as a means of placing troops into enemy territory beneath current day radar surveillance. 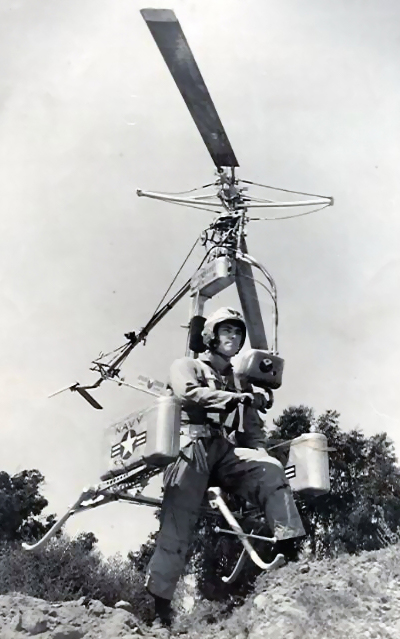 The patents and hardware were acquired by the Louis Schleiffer Company in Switzerland and further hardware development continued until 1995 when the project was sold to Intora-Firebird in Great Britain which in 1999 was working toward CAA certification.

The Intora-Firebird B/2 is very similar to the original Mini-Copter (B/1) concept funded by the U.S Navy except that the skids more closely resemble those of a conventional helicopter and the rocket motors have been moved from inside the rotor blades out to the tips.

The control system is essentially unchanged from the original design. Pitch, roll, and yaw is controlled by an overhead stick very similar to the Bensen Gyrocopter and Little Zipster designs.

Rotor Rpm is controlled by a throttle that varies the amount of hydrogen peroxide fuel delivered to the rocket motors at the tips of the rotor blades.

A fully enclosed, two-seat model helicopter is in the planning stage, and a model B/3 incorporates a Rotax engine and fuel in place of cargo to provide an autogyro mode that will have an extended range of 750 miles.

The hydrogen peroxide technology has been perfected in the space program where it was utilized as an altitude control system in the Gemini and Apollo projects. 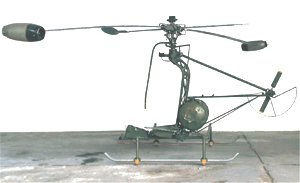 As mentioned in the editorial the fuel is 90 per cent hydrogen peroxide and 10 per cent water.

Hydrogen peroxide in forty to fifty per cent solutions is available commercially, which may be of sufficient concentration to provide adequate thrust for spinning gyroplane rotor blades up to or near flight speed.

In saying that it is “available commercially” – does not necessarily mean it is freely available to the general public, even for fueling a helicopter. 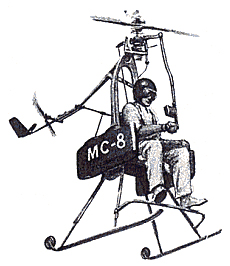 Hydrogen peroxide is highly volatile in high concentrations which would require special handling and permissions for safety reasons, including specific storage requirements.

The catalyst for the tip jet which is a silver plated screen does have to be changed periodically but according to Intora-Firebird it can be accomplished in less than a minute.

Another good feature of hydrogen peroxide rocket propulsion is that it is non-polluting, a first for helicopters (though electric options are currently being investigated).

The resultant reaction produces only steam – water and oxygen. The hydrogen peroxide rocket just may be the ultimate solution to tip-jet propulsion if the problems of manufacturing and handling the fuel can be overcome. 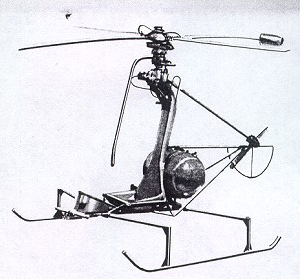 There appears to be a lot of commercial applications for the tiny ship with it’s torque-less pollution-free design.

The machine could be used by law enforcement, border and forestry patrol, just to name a few applications – usually unavailable due to the high cost of traditional commercial helicopters.

Military applications could include use as a drone helicopter or as a man carrying aerial platform for numerous missions. We’ll keep you posted in the development effort.

While this article concentrates on the Intro Firebird tip jet helicopter – there were many different ideas for the single person helicopter reviewed by the US military, the following (first video) was one of them.

EDITOR – Correction: Hello, the pictures of the Firebird tip jet helicopter in the article: “The Mini Copter Revived” by Don Parham (1999) are actually pictures of the Polish JK-1 TRZMIEL, designed in 1956. The first prototype killed the pilot when one of the ramjets broke free from the rotorblade. Tests where stopped after the second prototype, remotely controlled, showed further shortcommings. Gilbert Van Meel. (thank you Gilbert for helping us correct this information) – Ed.

The British Intro Firebird helicopter – formerly an American helicopter, has now been sold to a Swiss company who further developed the craft into the now DF1 Dragonfly. Read more about the DF1 Dragonfly elsewhere on our site. 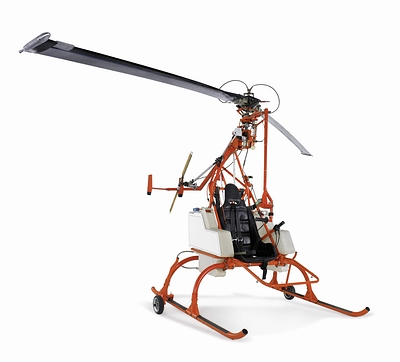