How To Keep Them Working? Repair Or Replace? The Experts Have Some Hints — And Conflicting Views (December 1968)

One bright, calm day I found it even easier to be lost without one. Blithely following the needle, I was humming along over the Florida Everglades (great place for emergency landings, if you’ve a yen to practice what you learned in survival training!) on my way to Sarasota, when something seen from the corner of an eye triggered an SOS. It was a road way out there to the left; the one that should have been directly below, if I were on course.

Reluctantly admitting that the needle was wrong, I consulted the chart, scooted back over the road and continued the rest of the flight with painstaking pilotage. There-after, in accordance with Darwin’s most notable law (survival of the fittest), I adopted several firm radio rules which you might add to your repertoire, particularly when using unfamiliar rented aircraft:

Actual owners of those mysterious black boxes should be acquainted with a few other rules as well: those made by the FCC and FAA affecting radio licensing, maintenance and operation. One of the key FCC licensing rulings is that on spurious radiation.

All aircraft transmitters radiate signals on frequencies other than the ones to which they are tuned. (Receivers also radiate on a negligible level.) Eliminating this spurious radiation completely is prohibitively expensive with present technology, but it has been narrowed down significantly in recent years, leaving older model sets conspicuously radiant.

Many of these models will not come within the .005mg allowable tolerance which becomes effective in 1970. Some manufacturers are producing attachable filters to cut down excess radiation, but even these will not save some old tunables from being unlicensable.

Speaking of tunables, whether or not you should be using one at the moment depends entirely upon what you use your airplane for and where you use it. You can get by without any radio at all just tooling around the neighborhood uncontrolled field in broad daylight.

But frequently penetrating high density areas on long cross-countries with only tunable equipment does not make good sense, considering the limited number of frequencies you can get as opposed to the maximum number you might require.

Assuming you have a duly licensed radio adequate for your needs, what do you do if and when it poops out on you? Legally, your old buddy Joe can do the fixing, if he can find a licensed repairman to check his work, but letting a non-professional mess around with sophisticated electronic equipment is risky business. 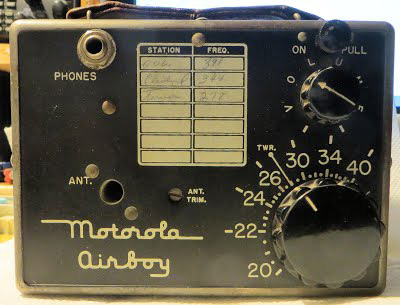 FAA radio shop approval is based on the quality and quantity of employees and equipment available at that location. Manufacturers, too, give special recognition to repair stations which have the equipment and know-how to install and repair the sets they manufacture. It’s a good idea to take your radio problems to a shop which is FAA and manufacturer approved.

Before you rush over to the nearest repaid station with a problem, however, make sure you have some notion of what it is. The less time a technician has to spend finding out for himself, the quicker he can go about fixing the problem and the smaller will be your total labor charge. Remember, labor charges are hourly.

Jim Dibben, manager of the FAA approved Pacific Airmotive shop at Burbank Airport in Los Angeles, stresses the time and money saved by properly defining a repair problem. “It’s important to describe in as detailed a manner as possible the nature of the failure.”

“This can save as much as 80 per cent of the cost of repair and improve chances of accomplishing a complete repair job. In fact, it’s wise to get the repairman out into your airplane and demonstrate the problem. It might not be in the radio at all. It could be the installation, the speaker or the mike jack.”

He recommends knowing the answers to the following questions in order to pinpoint the area of the problem:

Dibben vouches for the reliability of many older radios and credits them with lower maintenance cost on an annual basis.

He quotes an average maintenance cost on older sets of $80 to $120 every two years as compared to $100 up to three times a year for some of the newer models. “The reason,” he says, “is based on ‘Murphy’s Law’: The more complex are the workings of any machine, the higher the probality of its failure.”

The newer radios contain a greater number of more sophisticated and more costly tubes, have as many as 1200 contacts to fatigue and get dirty and use an enormous number of transistors. Transistor state of the art is still in its infancy, but it has great, really great promise.”

“Transistors can have a life expectancy of 20,000 hours, compared to the 400-hour life of a vacuum tube. But present day transistors are still too vulnerable to temperature.”

Another radio man, Larry Olson, owner of Airadio shops at Orange County and Long Beach airports, warns against letting old buddy Joe install your radio. An ex-Naval airborne radar technician with 12 years of electronics background, he estimates that about 15 per cent of the repairs done in his shop are due to improper installation, notably repairs on pulse equipment (DME and transponder).

His suggestion is that if you’re going to spend thousands on the equipment, it’s penny wise to scrimp on the approximate $100 professional installation charge. About preventive maintenance, he says: “Most of the maintenance done at Airadio is corrective. But tarnished silver-plated switching or dust behind the panel will increase the possibility of contact failure.”

“About the only preventive maintenance the owner can do is have the set professionally installed in the first place, then bring it in to have the switches cleaned and for a general inspection once a year. This usually costs from $30 to $40 including parts, but will prevent intermittent operation due to contact failure and might disclose the development of a more serious problem.” 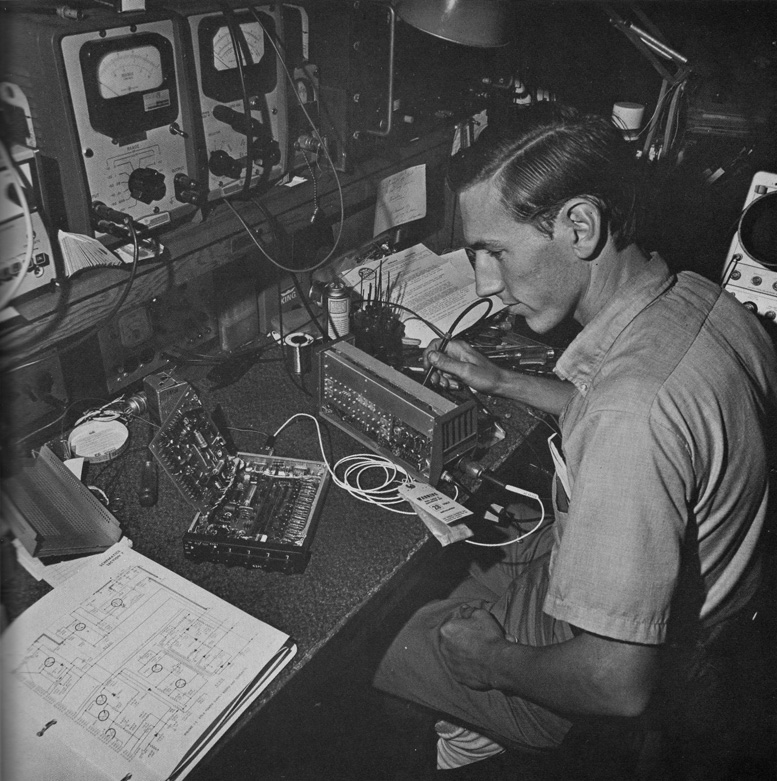 Airadio technician Mike Bennett uses volt meter to probe inner depths of Narco’s latest, the AT-6 transponder.
A well-equipped radio shop must have a wide variety of testing apparatus, plus experts who know how to use it.

Olson ascribes the constantly rising repair rates to the equipment and special training required for repairing the latest radios. Airadio has approximately $80,000 invested in testing equipment and about $10,000 in stock parts.

When designs are changed, equipment must be upgraded and employees must take time out to attend factory training sessions. The manufacturer’s view comes from Narco’s West Coast regional representative, Joe Monaco. “The newer model radios,” he says, “give you more for your money.”

“The old Mark II Omnigator with seven channels, for example, cost $1045 in its day, about a quarter again as much as today’s 90 channel Mark III which is half its weight and draws only one third as many amps. Design techniques of older radios were the best of their time, but technological advances have been tremendous over the last few years.”

Contrasting his opinion with that of repairman Dibben, who cited the low maintenance cost of older models, Monaco goes on: “New radios cost less from a maintenance standpoint and provide the requirements for today’s environment.”

“Keep in mind that the aircraft population is about double what it was 10 years ago and that according to the FAA, the number of voice contacts has increased more than 200 times and the number of instrument pilots more than tenfold in recent years.”

This difference in opinion regarding the maintenance cost of old vs. new sets emphasizes the amount of latitude which exists for individual decision-making when choosing among the great variety of avionics currently available.

Both views could be considered valid, depending on which equipment is being compared, but basically, it’s up to you and me to decide whether a component meets our specific needs and wallets. All three men agreed that one of the biggest problems in the electronics industry is the shortage of trained personnel.

For one thing, the rapid expansion of the industry has created an overall shortage that won’t catch up with demand in the next 20 years. For another, good technicians are lured from aircraft radio by the heavy electronics industry with higher pay, more benefits and other goodies.

So If you can find a good radio repairman, you would do well to treasure him. His prices might be higher than those of old buddy Joe, but chances are he can do the job and Joe can’t. The fellow must take a lot of pride in his work to justify the necessary investment in equipment and the refusal of better paying opportunities elsewhere.

And here’s an encouraging thought: at the present rate of advancing technology, even better, more reliable radios are near at hand. The time will come when visits to any repairman will be fewer and farther between. 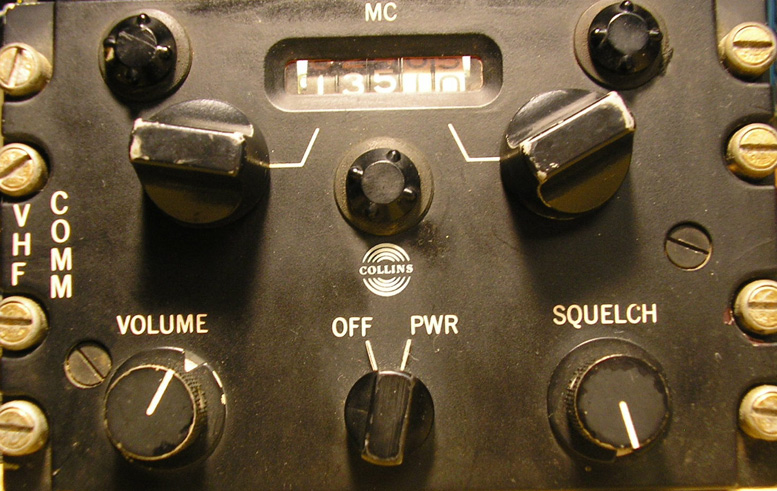 Article Name
The Riddle Of Rickety Radios
Description
A historical article of airband VHF radios, the problems that were encountered, and how you would go about getting your aircraft radio comm repaired.
Author
Annette Perrenod
SHARE TWEET PIN SHARE