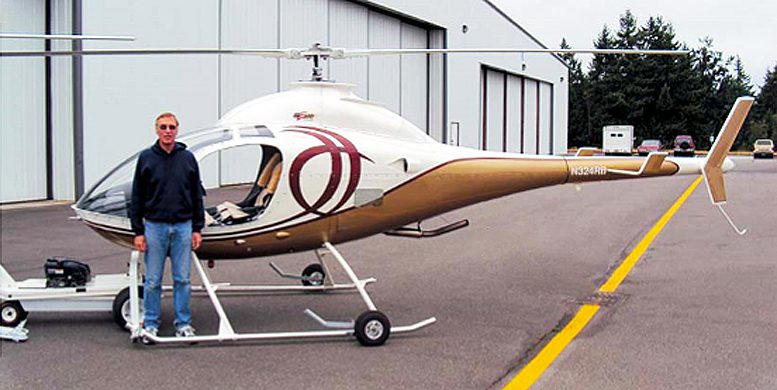 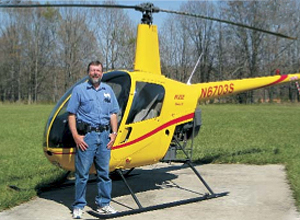 Back around the late ‘80s RotorWay developed a revolutionary adaptation of their famous Exec helicopter and named it the Rotorway Elete. The body was totally redesigned to give the Elete a much improved aerodynamic contour that would dramatically reduce drag at higher airspeeds. RotorWay promoted the Elete as their fifth generation ship and at least four were built before the company fell into bankruptcy.

The Sierra Rotorcraft Club in California had somewhere around 30 RotorWay helicopters. They included five Scorpions that were flying, many Exec 152’s, and three of the latest Exec 90’s owned by Jeff Dunham, (the now famous ventriloquist/comedian), Steve Lewis and Phil Verbeck. Several club members decided to fly their RotorWays from California to the factory in Arizona for the grand opening. Ground crews and motor homes provided support for the trip.

Steve Lewis flew his Exec 90, Dan VanDuesen flew his Exec 152 and I few Nathan Fronsman’s Exec 152. We had a great flight with several planned fuel stops along the route. Our ground crew kept the gang at the factory updated on our progress. When we began the last leg of our trip to the factory, around 15 RotorWays, already at the factory were launched to meet us.

We met up with the welcoming committee on the outskirts of Phoenix and then flew in as a large formation of around 18 RotorWays and performed several fly-bys once we arrived at the factory. Soon after we arrived at the Open house, a local pilot arrived in his RotorWay Elete. That helicopter was a show-stopper. Larry W., the builder and still the owner of this Elete, was inundated with questions from the many attendees.

Many asked RotorWay to offer the Rotorway Elete as a kit but the principals at the company made it clear that this model would not again be produced. On the morning of day two at the Factory, I got a chance to fly the Elete in a cross-country flight that many of the RotorWay pilots were going to make to a popular restaurant. When all of the other RotorWays were airborne, I lifted the Elete and began to follow. It immediately became apparent that the Elete was much faster than the other helicopters.

Within a very short time we caught up with the formation and comfortably passed them while cruising at around 120mph. I was absolutely amazed at the way the Elete flew compared to my Exec and I wanted one. On our return to the RotorWay Factory I again tried to encourage their team to once again produce and sell the Elete kit but they were not at all interested in entertaining that idea.

That afternoon, it was arranged that a flight of around 25 RotorWay helicopters would depart the RotorWay Factory and fly around the outskirts of the greater Phoenix area. The single file formation extended for several miles and was led by Jeff Dunham in his Exec 90. I was flying with Nathan in his Exec 152 at the back of the formation. Larry few his Elete but did not join our formation.

One minute we could see the Elete at a very low level chasing wild horses down a ravine, and the next minute Larry had the Elete back up at 1000 feet flying alongside our formation. There was one point in the flight where Larry circled our entire formation several times as we were flying at cruise speed. That little Elete continued to impress every pilot on that flight.

I never forgot the impression that Larry’s Elete made on me. Several years ago I received a call from Larry telling me that he still had the Elete and he was planning on attending a popular RotorWay fly-in. Several months later I received a call from Jeff Bocott, of Gig Harbor, Washington. PHOTO ORV ELETE Jeff had purchased one of the two or three remaining RotorWay Eletes and was planning on attending the same fly-in and could meet both Larry and myself. 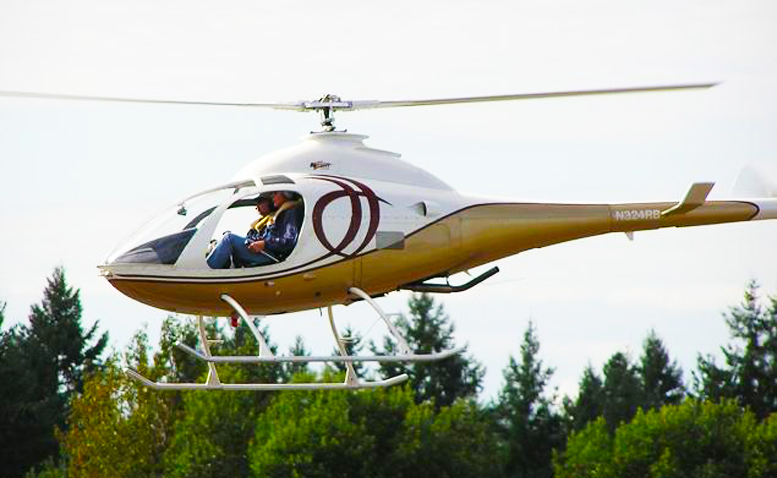 At the last minute Larry had to abort the fly-in due to work load, so Jeff and I, meeting at the fly-in, began planning to get his Elete, which had been submerged in a flood at one time, back into an airworthy condition. The process began and progress was made with his 162F fuel injected engine and some of Andrew Burr’s drive train after market pieces. In all I made three separate trips to Gig Harbor while completing the phase one flight testing.

The instruction phase showed the little helicopter to fly quite nicely. It is the body panels, cabin and wind screen that set the Rotorway Elete apart from any other RotorWay. The front of the Elete’s body and wind screen taper to a narrow point, efficiently cutting through the air. RotorWay designed an air flow separator between the wind screen and the lower body panel to separate the air flow over and under the body.

Every body panel aerodynamically flows into the one behind it to dramatically reduce drag as the Elete slices through the air. The winglets on the horizontal stabilizer are larger than other RotorWay models providing more forward flight stability. I have found that both of the RotorWay Eletes that I have flown very easy to hover, they pick up and set down nicely, and accelerate and cruise comfortably at a significantly higher forward airspeed than any model of RotorWay helicopter I have flown.

I feel very privileged to have flown two of the three or four RotorWay Eletes that now exist. There is one in RotorWay mothball storage and one more is rumored to exist somewhere. (Editor’s Note: A RotorWay Elete with Canadian registration C-GRDS was reported down and caught fire in June 1997. This ship was registered to a J.B. Maltais Ltee on Feb 1996. It is not known if the bird was re-built)

It is my personal opinion that if the RotorWay factory should once again offer the Rotorway Elete with all of the present day upgrades, they would have a hard time keeping their production up with their sales. What do you think? I have a lot of photos of the inner workings of the Elete that I could share if the interest is there.