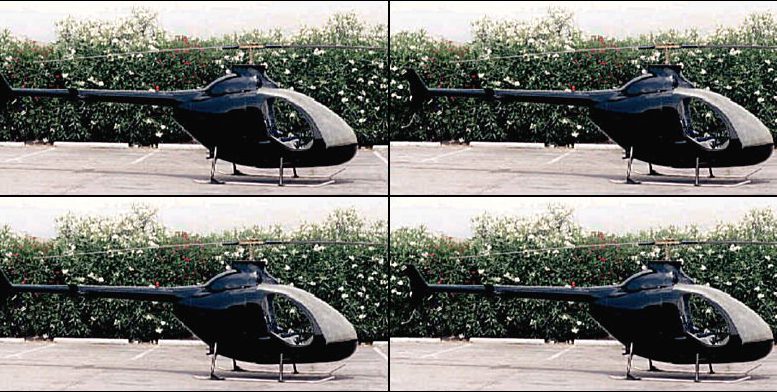 Here your dream can come true. An opportunity to become a helicopter kit manufacturer with the Zeus Helicopter, or simply purchase a one-of-a-kind experimental helicopter that’s tough “and” a real eye catcher.

Development of the Zeus helicopter has cost well over $400,000, but you can have it for fraction of that price. Do not let this opportunity get away.

Due to the molds, you can build as many Zeus helicopters as you desire. Sky is the limit – complete and unrestricted manufacturing rights are included.

The Zeus helicopter is powered by Chevy V6 four stroke gasoline engine mounted in a vertical position, but it could adapt most of the automotive engines or turbine engine. Utilizing dual ignition and dual fuel pumps for dependability. Transmission is gear and pressure lubricated. The entire helicopter has only one single V-belt used for powering the alternator. The tail rotor is shaft driven with gear box in oil bath – no belts!

The ZEUS Helicopter was developed during 1993-1998. Two prototypes were built and went through hours of testing (about 170 hr). The Zeus helicopter never went into production because we ran out of funds in 1998 and couldn’t afford the materials to make a production run after investing all our money into the prototype design and tooling/molds.

Most of the mechanical components are “stock product” and it can be purchased off the shelf (list of the suppliers is provided with sale). Gear boxes can be machined from one piece (expensive way for small number production) or cast of aluminum (economic way for larger production).

Drawings of the Zeus helicopter gear boxes are provided with sale. Rotor blades are also “stock item”. Drawings of main gear box for horizontal engine application are also included, if you decide to install a different engine.

The GM (Chevy) engine can be replaced by a lighter aircraft Lycoming engine and can still be mounted in the same vertical position.

There is only one company in the USA manufacturing a similar helicopter kit (two seat) and another in Canada (Safari Kit Helicopter). You can be third!

Seller admits no liability by publication of this writing. SOLD AS IS.

…Peter Bures – “We will ship the Zeus helicopter worldwide. It will take full 20 ft. container to ship the production set. Cost of the container shipping over seas would be about $2500-$4300 depends on country of destination. Local pick up is available”.

Be the first to comment on "Two Seat Zeus Helicopter"