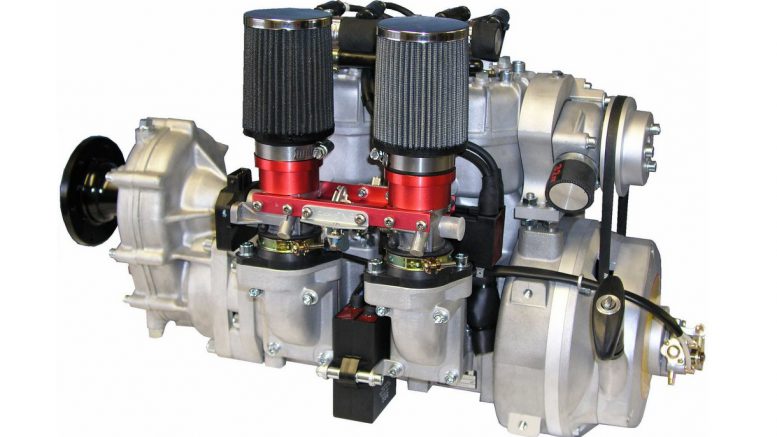 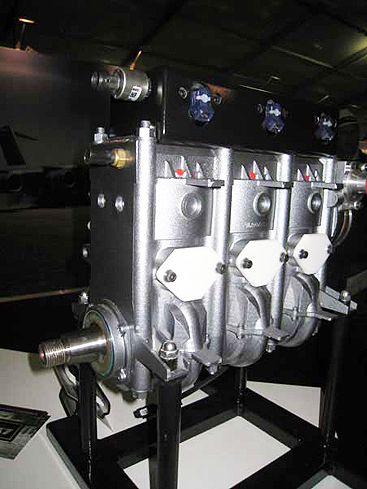 The following information contains brief reviews of the most popular two stroke helicopter engine options and two stroke aircraft engines with links to the manufacturers pages (for further information).

We start with an unusual but promising release from a long standing aircraft industry company, the “traditionally four stroke” aircraft engine manufacturer – Lycoming.

While I have yet to see any further information than that presented here, we believe that with the technical resources of the EL-060 aircraft engines manufacturer, Lycoming – there might finally be a more reliable and technically advanced two stroke ultralight aircraft engine on the market.

This is assuming the heavy fuel two stroke drone engine will be released to the general public – and how Lycoming would handle distribution and maintenance. 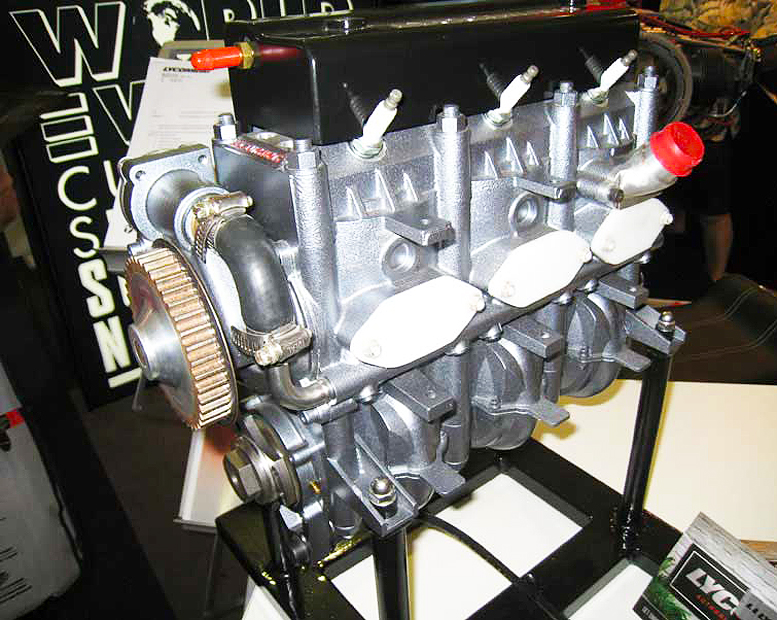 The Lycoming EL-060 looks like a better option for those wanting to build an ultralight helicopter or rather, light experimental helicopter such as the AW95 by Doug Schwochert, Osvaldo Durana’s Furia helicopter – also known as the Cicare CH5 helicopter, and the SkyLark helicopter by Vortech. Three cylinder engines are known for generation lots of “fluid” torque as with the Suzuki Geo Metro auto engine conversions by Raven Redrives. 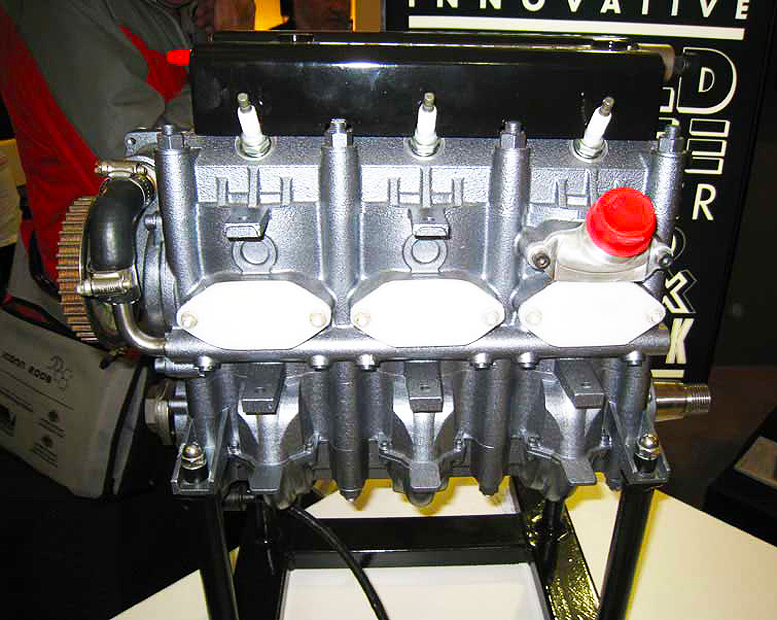 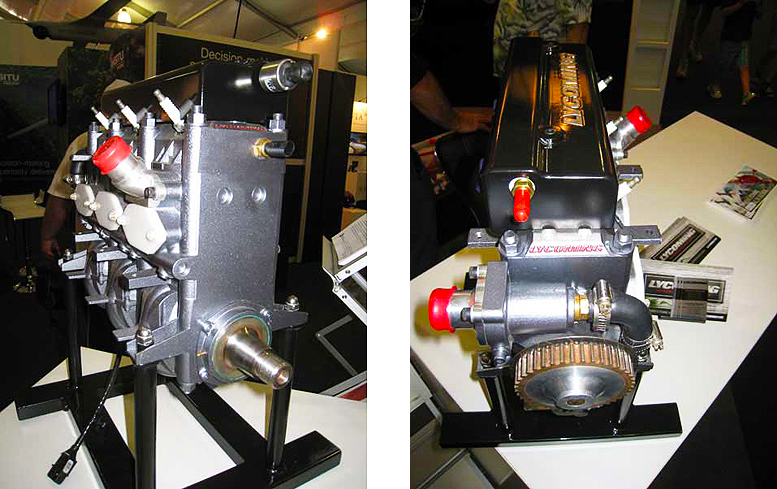 Based in Williamsport, PA, Lycoming is the world’s premier manufacturer of certified four stroke piston aviation engines. For more than 80 years, Lycoming has designed, manufactured, tested and provided worldwide support for products of legendary reliability flying in thousands of aircraft and millions of flight hours (combined). 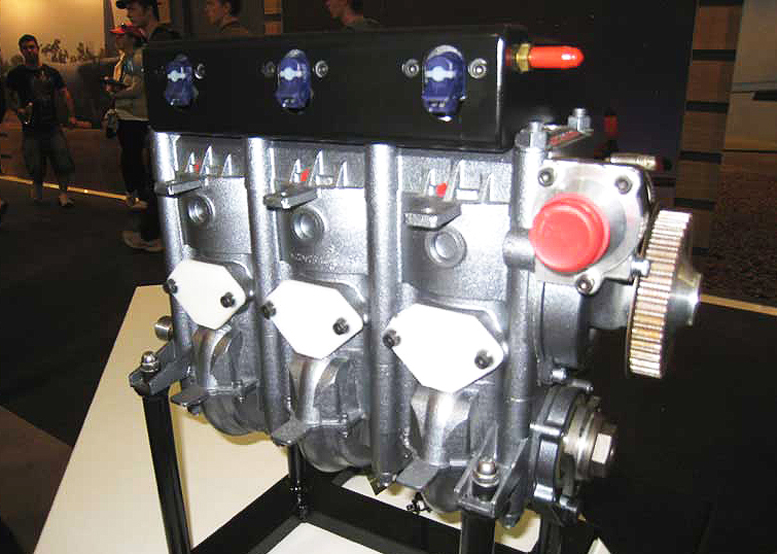 It is with great pleasure we announce the latest addition to the Lycoming aircraft engine range. Primarily designed for the military in UAV applications, we hope to see the new three cylinder two stroke Lycoming EL-060 engine find it’s way to the sports aircraft and rotorcraft arena. Though currently Lycoming has no plans to do so as the engine was designed specifically for drone use. 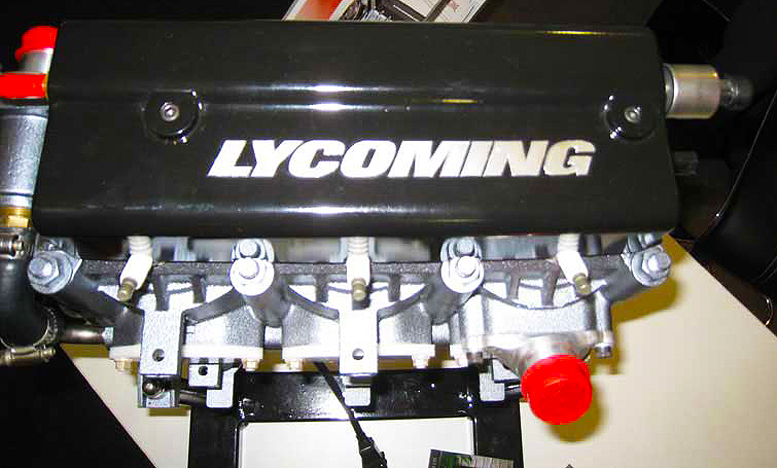 It basically is a two stroke set up similar to a diesel where the sump provides separate lubrication avoiding the need for pre-mix fuels that has many draw backs such as fowling plugs, engine seizures and accelerated fuel degradation. Gone are the days of having to carry two stroke oil, messy measuring and mixing on every refuel. 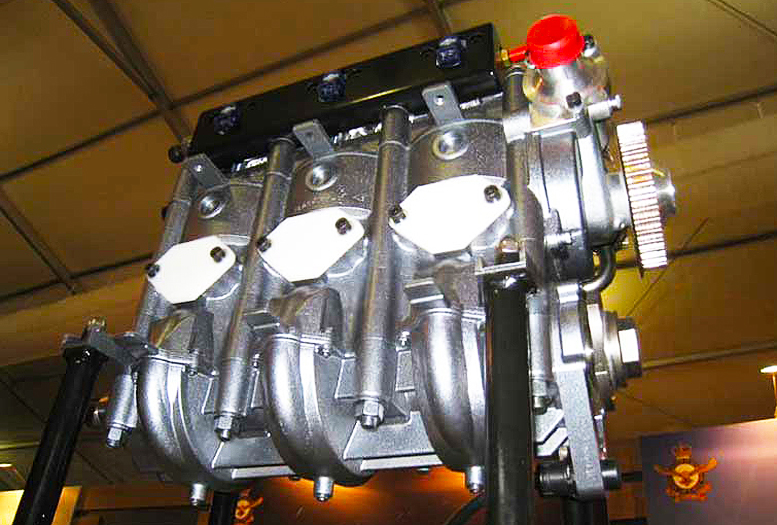 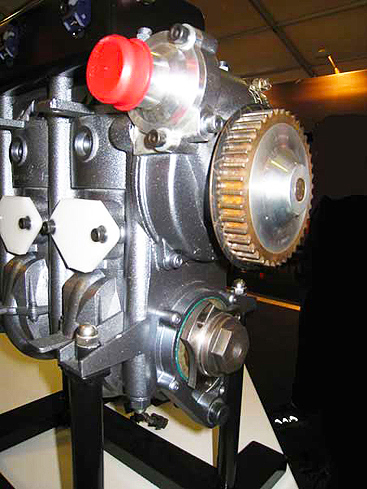 ▣ Fuel: JP4, JP5, JP8, AVGAS or MOGAS. Can operate with carburetor (gasoline only) or with direct-injection systems

▣ Engine Mount: Mount position can be varied – Engine can be supplied with custom mounts 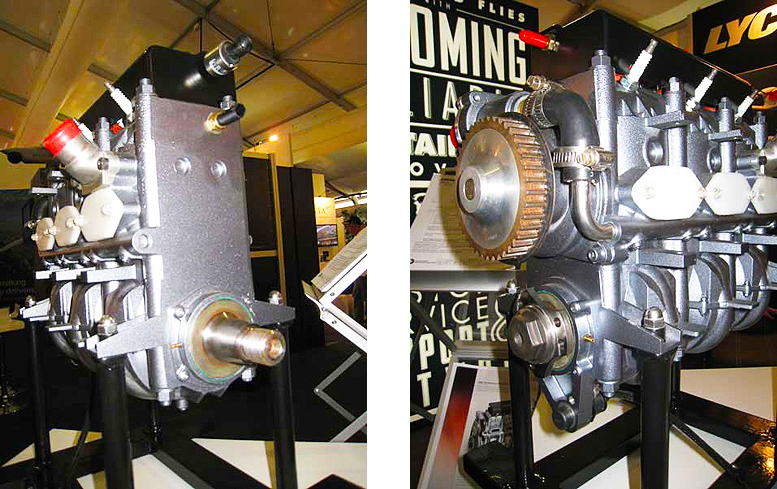 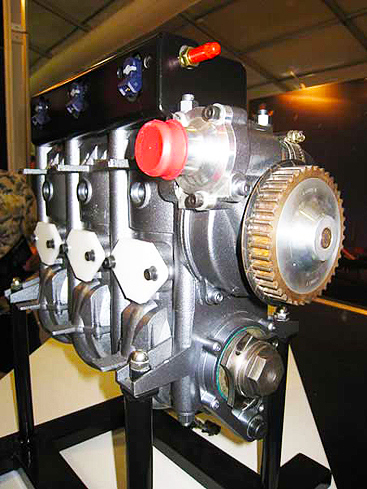 My personal opinion… A two stroke with sump lubrication can only mean no more fowled plugs and less likelihood of stale fuel issues due to oil mixing.

The engine is small, VERY lightweight and similar in costing to current aircraft two stroke aircraft engines so a viable choice.

The engine was designed for harsh military drone usage by an extremely reputable aviation engine manufacturing company that has been around for many years.

Lycoming already has a worldwide support network established assuring confidence in your purchase.

Can’t wait to see experimenters adaptions of this engine, especially in helicopters that require a higher margin of reliability.

Installed performance figures would be great to see – the proof will be in the flying! 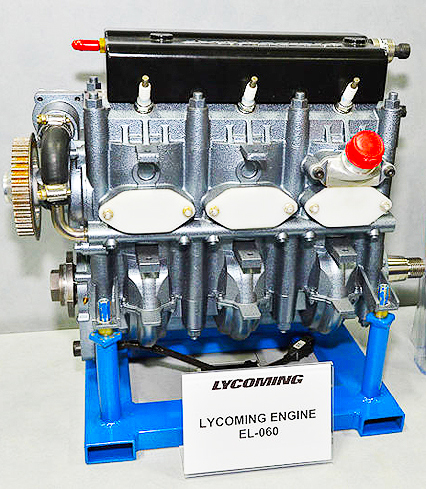 I really don’t think that Lycoming are going to be so forthcoming in releasing this engine to the public for experimental use, especially if they have military contracts on this engine.

I dare say they would be hard pressed to keep it from the sports aircraft industry who will be more than willing to give it a thorough test in everything, or anything that flies!

In terms of sales numbers alone, if the engine is as good as presented – it could dominate the market and replace many a hard worked Rotax, Hirth or other standard two stroke engine.

It has been two (2) years since I saw the a spark-ignition multi-fuel two-stroke EL-060 presented at the airshow, and as of the time of reviewing this engine, the only industry chatter has been in military forums from around 2013.

Time will tell, watch this space… 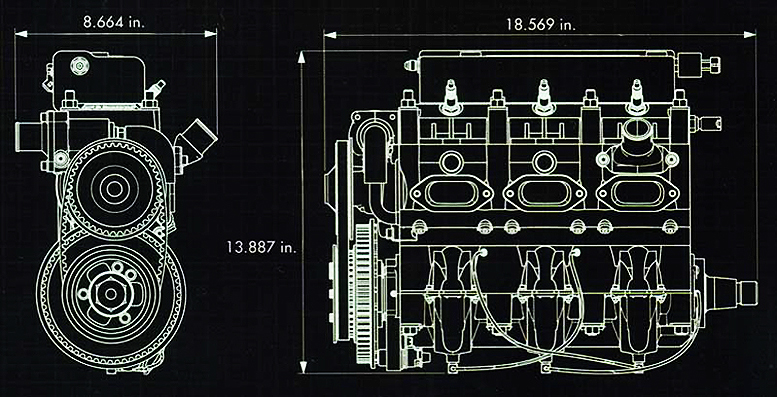 The Mosquito XE sports kit helicopter is available with either the MZ 202 or the 3 cylinder MZ 301 two stroke engine models.

The two stroke Compact Radial Engines have become very popular with aviators due to their successful use in the kit helicopter industry and proven reliability in other ultralight aircraft, over and above other establish two stoke engine manufacturers.

This is the base engine for that particular helicopter and has found popularity in it’s reliability, especially when compared to recent failures such as the Mini 500 helicopter that used the more well known Rotax two stroke engines.

The Compact Radial MZ range of aircraft engines has a growing following with it’s high quality finish and appealing specifications.

Hirth have continued as the primary alternative to the Rotax two stroke engine though have been dogged by mixed reports of reliability, service and support. They offer many great options in their range of engines and gearboxes.

Local suppliers seem to always be helpful in my experience dealing with them both in Australia and the USA though the USA dealer seems to be the only reliable company with many other international “dealers” changing hands.

When two strokes aircraft engines are run with ALL recommended maintenance and performance parameters adhered to, they can be a reasonable power plant.

I would always oversize an engine and have it running at less than 100% capacity to keep a little something in reserve and not push an engine to its limits. This should be relatively easy with their range of engines beginning at 15 hp right through to 110 hp.

Rotax have a long and well known history, especially in the snow mobile (Bombardier) and now jet ski sports dominating the market for many years.

There is no need to further discuss this well known engine here as much has been written in books, magazines and on the internet covering every aspect of this once dominant two stroke aircraft engine range. 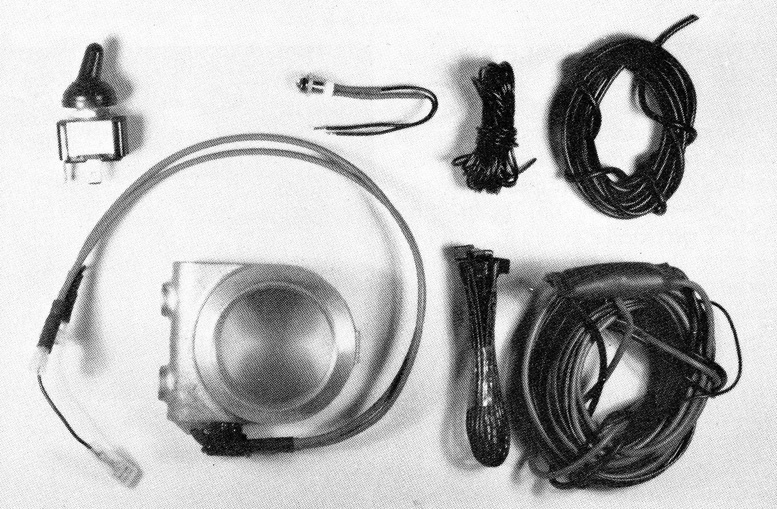 Powered right off the lighting coil, the unit adds a small amount of heat to the carburetor body, keeping its temperature above the freezing point. There is no significant heating of the actual intake air, so there’s very little loss of full engine power when carburetor heat is switched on.

Power reduction caused by the small electrical load is also very minor, allowing carburetor heat to be left “switch on” all the time, if desired, without detrimental effect on the engine, or on engine performance.

Microflight’s Carburetor Heater is furnished complete with heater, sensor module, indicator lamp, switch, wiring, and installation instructions. The existing air cleaner re-installs over the unit so that little, if any, retrofitting of other components is necessary. Single carburetor kits and dual carburetor kits were available (March 1992)

While making a name for themselves amongst the European flying community, Simonini is yet to “take off” in the USA (or countries outside Europe) even though there are some flying already.

There Victor 2 aircraft engine product looks great on paper with exciting performance figures though there are not enough on the market yet to provide reliable feedback (though sales are increasing). 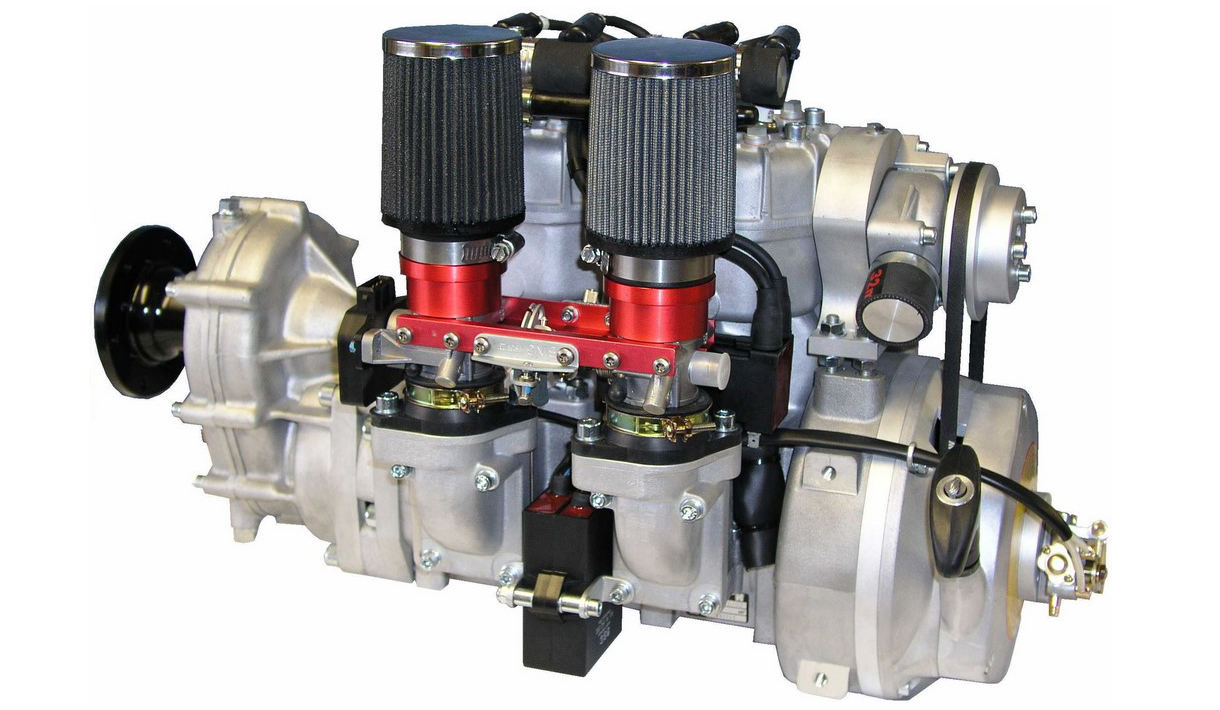 Be the first to comment on "Two Stroke Helicopter Engine Options"