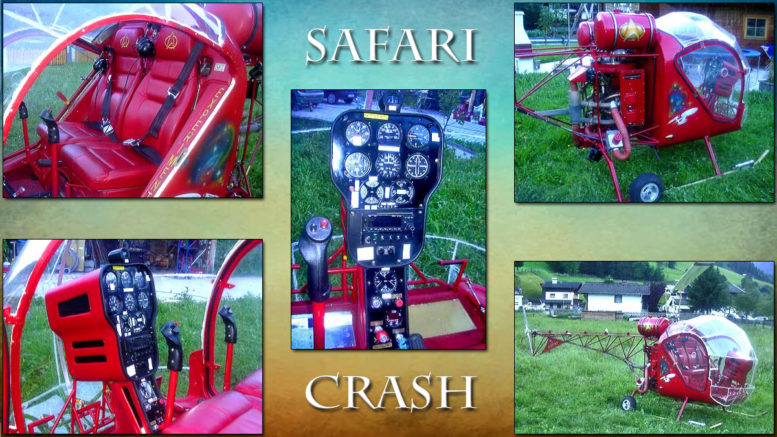 Dressing Your Helicopter For Disaster

Yep, you would like to win an award for the best helicopter. Yep, you also understand that judges highly score appearance. Yep, plain aluminum is not as pretty as chrome, or even better, color anodized.

Here is a photo of an Oshkosh Grand Champion Rotorcraft winner labeled before: 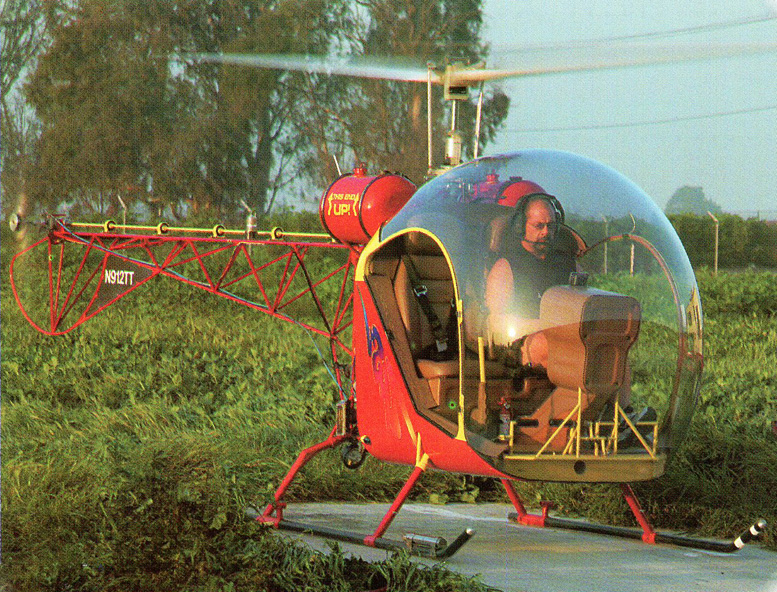 This gorgeous Safari helicopter was lost due to fatigue failure in a control tube, and it had only flown a few hundred hours.

The control loads are relatively low. Stresses calculate to be low. What caused the fatigue failure?

What was different about this ship’s control rods compared to all the other Safaris, none of which experienced this failure?

One answer to this question was: The rods were anodized black to add to curb appeal. So, the next question is: Does anodizing affect the fatigue life of aluminum? I received a resounding YES when this question was posed to the world of finishing experts.

In a report authored by Thart, WGJ and Nederveen, the following was stated: “Constant amplitude fatigue tests on anodized, unnotched specimens reveal that sulfuric acid and sealed chromic acid anodic layers cause the largest decrease in fatigue strength”.

Further, the initiation of fatigue cracks in the anodic layer is supported in another report authored by Shiozawa, Kazuaki; Kobayashi, Hirokazu; Terada, Masao; Matsui, Akira.

Japan Society of Mechanical Engineers, Transactions A. Vol. 66, no. 652, pp. 74-79. Dec. 2000 “The anodized film is fractured at an early stage of the repeated tensile fatigue process, because it is too brittle to accommodate the substrate metal.”

In an excellent text, titled Fatigue Design of Aluminum Components & Structures. Sharp, Nordmark and Menzemer, a chart shows decrease in fatigue life due to pre-cleaning as well as the affects of Alodine and a couple of different thicknesses of anodic coatings, (page 110).

What does this mean?

p class=”wp-caption-text jt”>Note: All two-blade helos have 2/rev vibrations whether the pilot feels them or not. A 2/rev vibration in a Safari causes a vibration of 17 hz. This vibration frequency impacting a device with a fatigue life of 0.035 million cycles would expect to fail after about 0.57 hours.

Also, the chart reported, the effect of reducing the stress to 25 ksi and the expected fatigue life of a non pre-cleaned sample with 0.002 anodic coating (as stated in the chart) is 0.08 million cycles. The same unit exposed to the 17 hz would be expected to fail after approximately 1.3 hours.

Here is a photo of the same helicopter labeled after: 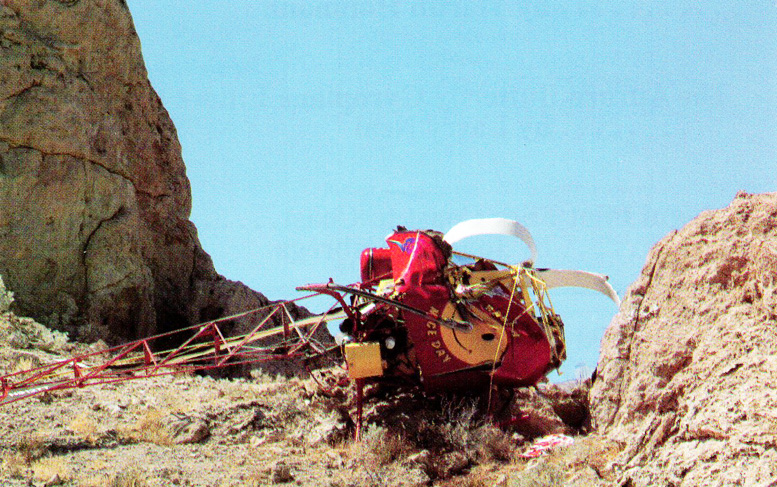 Gilbert Goodlett’s award winning ship — after. The good news is that Gilbert walked away from the crash with only a sprained ankle — walked, in fact, several miles before reaching cell phone service.

Again, experience can be misleading when people say, “That’s a crock. I know of anodized parts that have lasted much longer” Yeah, but what were the stress levels?

What was the vibration frequency? The pretty Safari lasted a lot longer than 1.3 hours. Measurements of the spring pressure required to trim out the collective forces on the Safari yielded approximately 50 lbs.

This load was distributed over the control tube, which was ½ inch x 0.083 aluminum tube, yielding a cross section of 0.109 square inch. A 50 lb load created a stress of approximately 460 psi.

For those of a bent other than engineering and metallurgy, an element stressed to a level less than the Endurance Limit is said to have an infinite fatigue life – in other words the element will last forever.

This infinite life is a characteristic of steels. Some sources stated that aluminum did not have a well defined Endurance Limit and would sooner or later fail no matter the stress.

However for the purposes of quantifying and establishing estimates, “The Aluminum Association Inc.” published Aluminum Standards and Data. 1988, listing an Endurance Limit of 10,000 psi for 500 million cycles.

Various other sources reported, for wrought aluminum, a limit of somewhere between 8000 and 18,000 psi depending on the alloy. Of course this number should not be used as an absolute limit. However, I am going to use it as a barrier between shortened fatigue life and long fatigue life.

We’re back to the big question: “How did the control tube fail in fatigue when it was stressed to a level much lower than the Endurance Limit?” 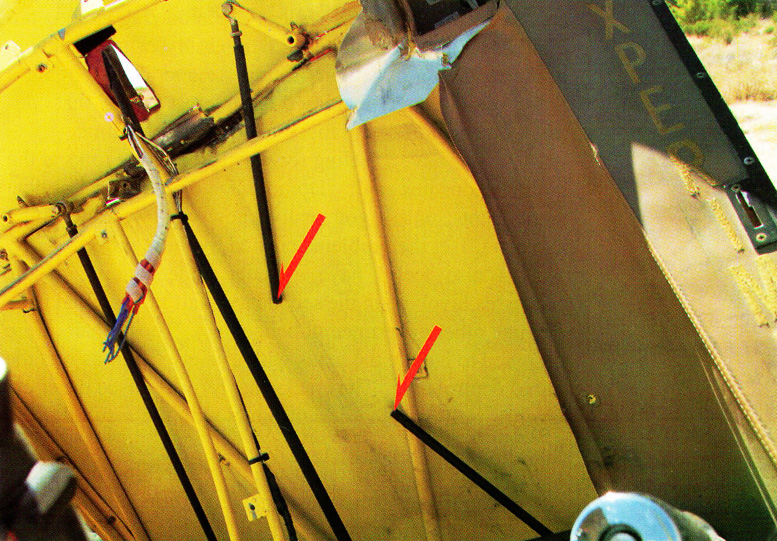 Photo A: Still in-place, but broken, control rod at the scene of Gilbert Goodlett’s crash. This rod failed in fatigue after only a few hundred hours. A possible answer to, how was this possible, is that this rod was anodized to increase the ship’s curb appeal.

The anodizing people said that anodizing would do this. But how did the process cause stress in the Safari helicopter control tube to exceed the Endurance Limit?

For, again, the evidence showed that the control tube failed due to fatigue. There was no evidence of a preexisting crack or notable surface discontinuity existing prior to the anodization that might lead to a stress riser.

No matter my opinion or yours, the fact is that an anodized control tube, under a relatively low load, failed in a helicopter causing a crash. To my knowledge, no other Safari, with bare aluminum control tubes, has had a fatigue failure of that tube and that includes helicopters with many more flight hours.

I have heard of stress concentration and stress risers but only believed the effect was due to a decrease in the cross section of the material. NOT SO. The following definition came up in a Google hunt.

The maximum stress felt near a crack occurs in the area of the lowest radius of curvature (the sharper the point of the crack, the higher the stress).

In an elliptical crack (elliptical was chosen for mathematical description ease) of length 2X, under and applied stress of F, the stress at the pointy end of the crack is given by:

Here, p is the radius of the curvature of the crack tip and F is the stress normally computed due to a load on a given cross section. In our Safari example, F = 460 psi. Note: the stress concentration factor is a function of the crack, and it’s sharpness, but not of its width.

Applying this equation to the control load experienced in the Safari we have:

Still, not enough to create stresses beyond the Endurance Limit. This piece should still have a long fatigue life. Kind of explains what happened to the crack in the sheet metal when you drill-stopped it.

However, let the radius of that crack become small, such as 0.001X (and this is still a large radius of curvature for the end of a small crack), then there is a large increase in the stress.

Now it is above the Endurance Limit. Fatigue life is no longer long. In fact it is probably less than one hour for our Safari control tube. The purpose of this article is to share some information that is both illuminating and shocking. Not all of the mechanical engineers I talked to are aware of the problems created by anodizing.

Not all of the anodizing experts are familiar with the stress concentration as the primary vehicle in the reduction of fatigue life due to anodizing. Being a Safari pilot strongly increased my interest in why that control tube should fail in fatigue at such light loading.

I now have a feeling for why some of the folks at the plating shops just said: “Do not plate or coat flight critical components, unless you really know what you are doing and can offset the problems created by these processes.”

I also feel I have a better understanding of the processes involved in the secondary shaft failures that have plagued other experimental helicopters. Those shafts were designed to handle the loads with a safety factor as was the Safari control tube. 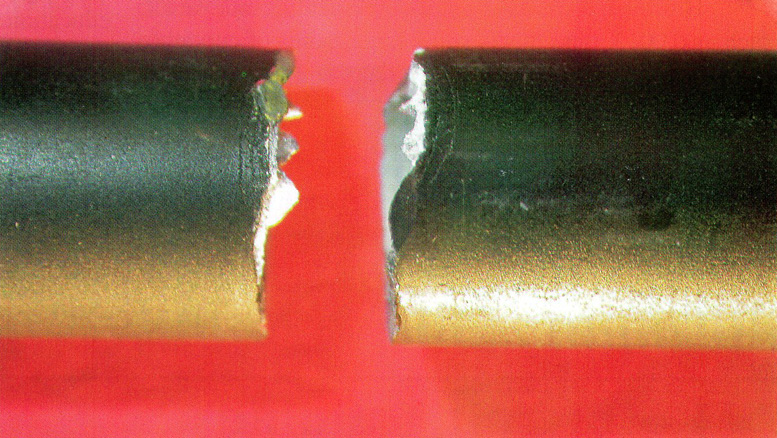 Photo B: A real close up of the two broken ends of Gilbert’s control rod.

The cracks that formed raised the stress level to well over the design limits with the resulting failures. Then, near the conclusion of researching this article one of the biggest surprises emerged. Turns out there is a very negative affect by cleaners on fatigue life.

If you are using an active cleaner that attacks or etches the material during the cleaning process, the fatigue life of your ship will be reduced and maybe your life also. However as time has progressed it is even more clear that it ain’t necessarily so. The FAA says they allow us to play in this area for education.

I hope others are getting into it to gain education and not just to fly about. I am thoroughly enjoying the learning and one of the forcing functions that keeps me snooping is the readership of this website. I don’t know if I would put forth this much effort if it was just for me. Thank you for your support and participation in this helicopter adventure. 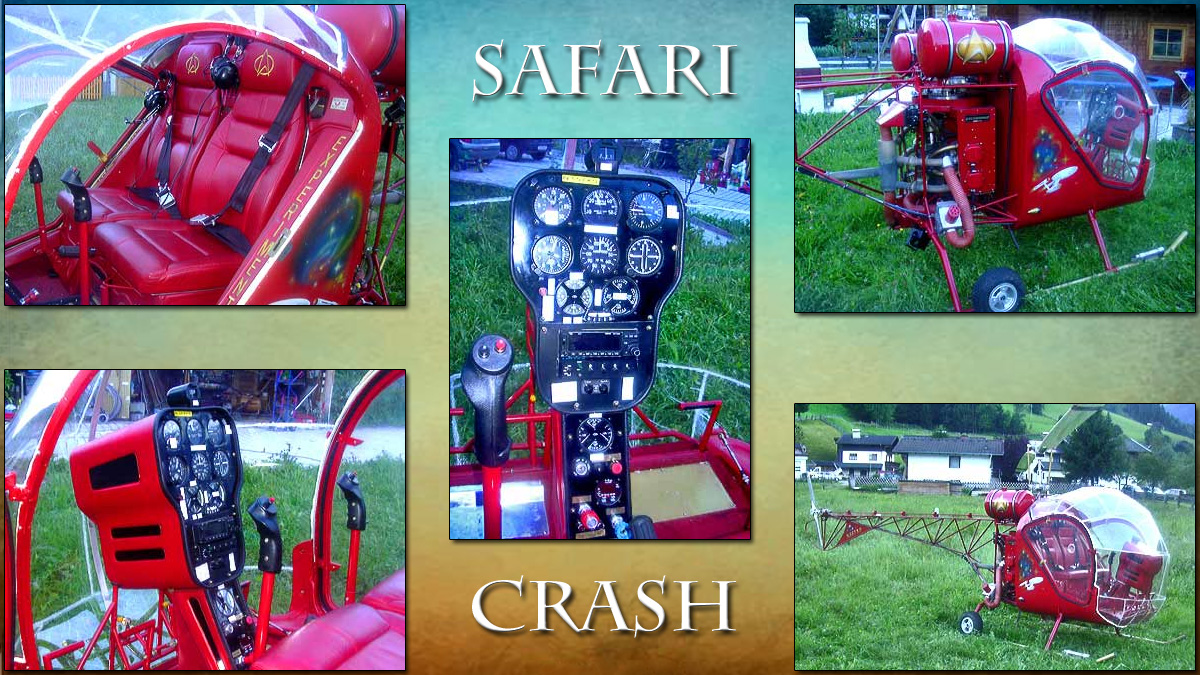 Article Name
Anodizing and Fatigue Life - Safari Helicopter
Description
While not limited to the Safari kit helicopter, messing with parts can cause problems. This particular Safari helicopter was unfortunate enough to discover how anodizing aluminum can cause brittle surfaces and induce micro-cracks.
Author
Stu Fields
Publisher Name
PRA
Publisher Logo