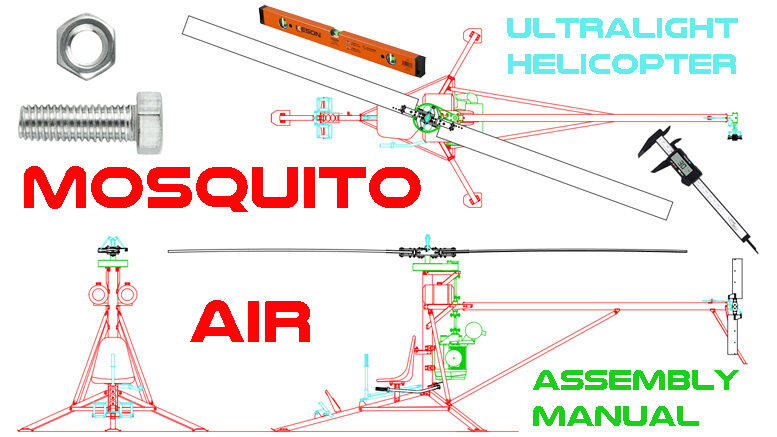 
Each helicopter came with their own issues including flight performance limitations, reliability concerns and manufacturing difficulties. While support for some of these designs was available, the homemade helicopter plans and construction drawings themselves were mostly vague and seemingly incomplete. This isn't to say there was anything wrong with the rotorcraft product presented, in fact many of these pioneers of the homebuilt helicopter market put much ot their personal time, effort and money into getting these designs into the air for all to enjoy.

On this site you will find a variety of free historical and technical information pertaining directly to experimental helicopters. New content continues to be added to existing helicopter articles. We encourage you to take the time to look around and visit any links you may find of interest. We also hold the marketing rights under licence for the LoneStar Kit Helicopter from the late Ken Rehler of Star Aviation Inc, New Braunfels, Texas.

Our vision was to offer a personal helicopter that can be built from plans to suit individual's varied flying needs. We had been working on two different single seat models, the first being the Buzzard single seat helicopter that could be registered as an experimental helicopter with a two stroke power plant and simple airframe - a direct spin-off from the original LoneStar kit helicopter - originally to be sold as homemade helicopter plans. This was originally based on the second generation LoneStar design with some basic airframe and mechanical modifications. It would have been much like the Mosquito Ultralight Helicopter "Air" version mechanically. While there are always parts that need machining when building, we had tried to keep the design to a minimum and utilize as many off the shelf parts as possible. This design has been currently been placed on hold.

The second release was to be the Spider helicopter which while being heavier, would be more robust and suitable to more extreme flying parameters - eg. real cross country performance. It would have increased endurance along with the more reliable four stroke engine or possible diesel auto engine conversion to suit heavier pilot weight and altitude requirements. The design would share component similarities with such designs as the Kinney HRH (Hot Rod Helicopter) and BUG helicopter designs.

Hovering a Helicopter is Hilariously Hard

With affordability being one of the most common issues when considering building your own homebuilt helicopter, we have kept our design relatively simple while still maintaining a respectable level of safety. Materials availability has also been an important consideration in our design's so we tend to stick to traditional methods. A rather standard 4130 chromoly aircraft steel airframe was the basis of the design.

While we have spent much money on pursuing these two designs simultaneously, we have resigned ourselves to the fact that concentrating on only one design would be a more sensible solution to presenting a completed project. For this reason the Spider helicopter will be the focus of our design concept. Our previous flying prototype of the Buzzard single seat helicopter has been sold and our Spider helicopter airframe and components are undergoing redesign to cater for new technology enhancements - see news and updates for details they become available.

Check out our news and updates section for progress on the Spider helicopter designs progress. While development is continuing, it has been at a much slower pace than expected. Being that we invest our own personal money into this project it becomes a limiting factor. On top of that we have the usual day to day challenges of life to contend with but never lose focus of what we set out to achieve; a viable, robust, cross country capable helicopter that can be built from scratch.

Whether the builder is a machining professional or just handy with a hacksaw, personal helicopter ownership can now be realized. With our proposed quality helicopter plans, the ability to successfully build and fly your own homebuilt helicopter can now become achievable.

Redback Aviation's proposed personal helicopter plans sets will be professionally drawn and considered complete. All helicopter designs will feature low maintenance (by comparison to the traditional Rotorway Exec and Scorpion designs), improved safety, and high performance. Our homemade helicopter plans will come complete with builders construction assistance to be posted on this site in various forms including construction videos. Please note: Helicopter licensing and registration rulings may vary in different countries, please check with your local aviation authorities before considering construction.

MOSQUITO ULTRALIGHT HELICOPTER OPERATORS MANUAL NOTE: This is the original manual draft for the Mosquito Air kit helicopter and not a current approved and updated…

A HELICOPTER AHEAD OF ITS TIME EDITOR: If anyone can help contribute to this article, please contact us. The single-seat C-122 Rainbow helicopter was a…

How to fly a helicopter :: The basics

Piloting this piece of engineering is no mean feat. Immense mental and physical co-ordination is required; the ability to use each hand and foot independently to operate the flight controls is a prerequisite for any prospective pilot. This means training to become a pilot takes a significant amount of time and money. Typically more than 1,000 registered flying hours and numerous written exams are needed if you want to fly commercially.

Controls inside the cockpit

Learn how these controls enable a pilot to maneuver a helicopter.

The radio and transponder tend to be located on the center console. A variety of other instrumentation will also be present, including master switches for the engine, and multiple temperature gauges, too.

Similar to an aeroplane, there are a number of instruments that need constant monitoring while airborne, including speed indicators, as well as the altitude (height) and attitude (forward speed) values.

Located at the front of the cockpit are two pedals, which control the tail rotor. Operating the pedals causes a lateral change in direction, and is used to combat the torque created by the main rotors during takeoff, which causes the helicopter to turn.

Sitting between the pilot's legs, the cyclic-pitch lever works to tilt the aircraft forwards, backwards or side-to-side. It tilts the rotor disc in the desired direction of flight, changing the angle of the rotor blades to alter the helicopter's direction.

This works to move the aircraft up and down, and is used during the helicopter's takeoff. When engaged, a collective change is imparted on the pitch of all the aircraft's rotor blade; by changing the angle of the swashplate (inset image). The throttle is also located here, which controls the engine's power. 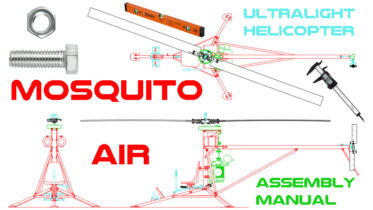 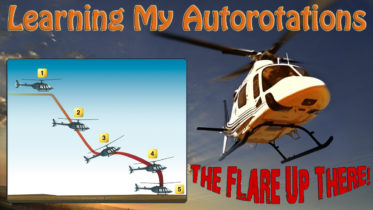 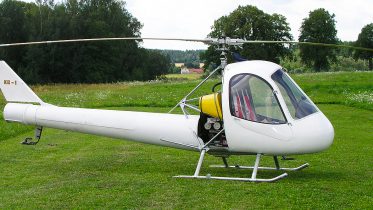 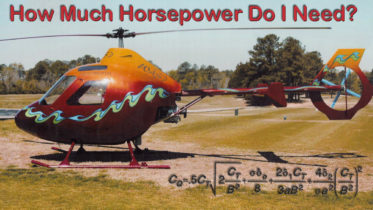 How Will My Helicopter Perform? Here’s how to calculate the horsepower required for a helicopter in level flight ARTICLE DATE: March 1997 Helicopter performance is…

How Safe A Pilot Are You, Really???

Advancements in helicopter technology - looking to the future 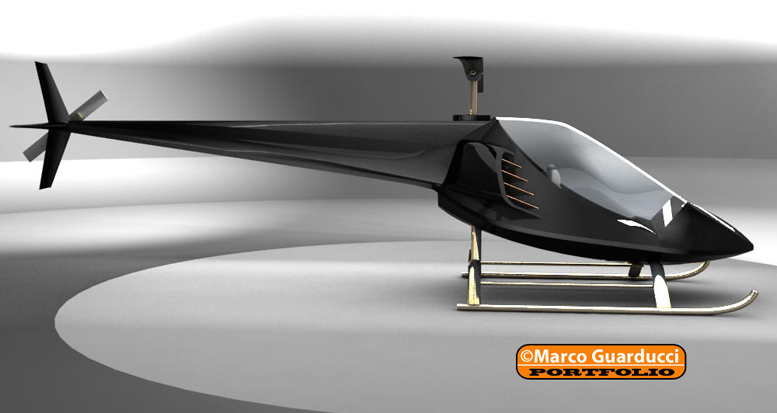 A number of recent advancements have improved on the existing helicopter design. One of these is the no-tail rotor, or NOTAR. This functions to solve two commonly encountered problems; namely the noise made by the tail rotor and the ease with which it can be damaged.

It works by blowing spent air from the helicopter's main rotor down the tail boom. Slots located on the tail boom allow the air to escape, producing a sideways force that works to oppose the torque generated by the main rotor. By varying the amount of air expelled, this can also aid directional control.

A second engine is also being fitted to some helicopters, which functions as a fail-safe if the main engine were to stop working. Either engine is capable of keeping the aircraft airborne, enabling the pilot to land safely in the event of an engine malfunction.

Traffic is swelling on roads around the world and in Brazil the wealthy are looking to avoid this altogether - by taking to the skies in personal helicopters. As such, novel designs such as the Volocopter are becoming increasingly popular among the urban elite.

Key to the success of vehicles like the manned Volocopter, which can carry up to two passengers at a time, is that they are capable of a vertical take-off or landing, making it very useful in tightly packed cities where space is at a premium.

The Volocopter is powered by electric motors, making it quieter and more environmentally friendly than a conventional helicopter. The lack of an internal combustion engine also eliminates the vibrations and the high noise level associated with helicopters, meaning the Volocopter is much more comfortable for its occupants. 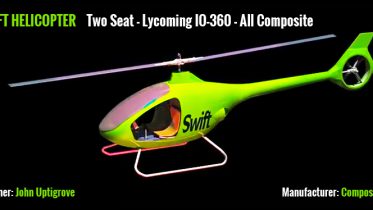 Powersports Rebirth Of The Rotary Engine

Learn To Hover A Helicopter