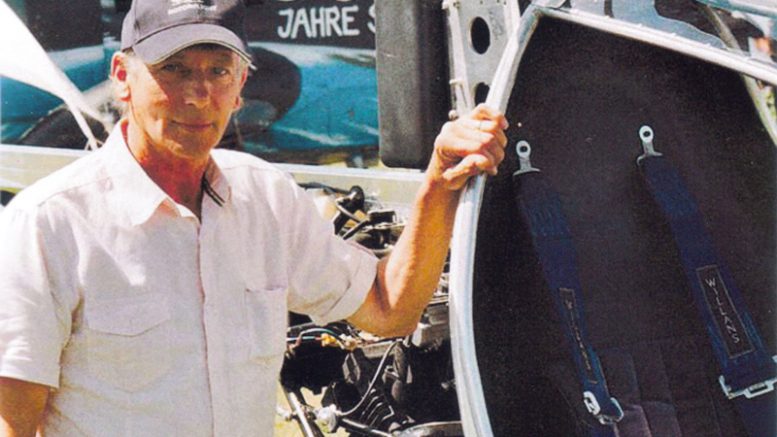 The following is a mix of forum posts and general information from designer Ben Cope about his experimental BUG Helicopter series.

The first design, the Grasshopper Helicopter, was designed and built in ten months. Everything was hand made except the engine (500cc air cooled Rotax engine). The helicopter uses Sitca spruce main rotor blades with a glass fibre skin. The updated version, the Mark 2 had an alloy and fibreglass body.

The helicopter was designed with the help of a computer program to give me power requirements, rotor diameters and blade sections etc. I drew up a the airframe using the theory that if it looks right it must be right, and just worked on it day and night. The stress analysis was only calculated on the rotor system as this was the obvious one that would bite me if i got it wrong. I paid meticulous attention to blade balance and alignment.

The mistakes I made were on the V-belt drives as they would slip if you pulled up the collective too fast. Whilst i know the correct proceedure would have been to improve the current design, study the stress calculations, re-build etc… I left it as-is beacuse it was only intended as a tethered test bed, I learned more from actually making it. It seems a common problem with anyone thinking of building a helicopter, the more they think about it, the more problems they see and it never gets made. The big problem is once you have done one you cant stop! I’m now on my third. 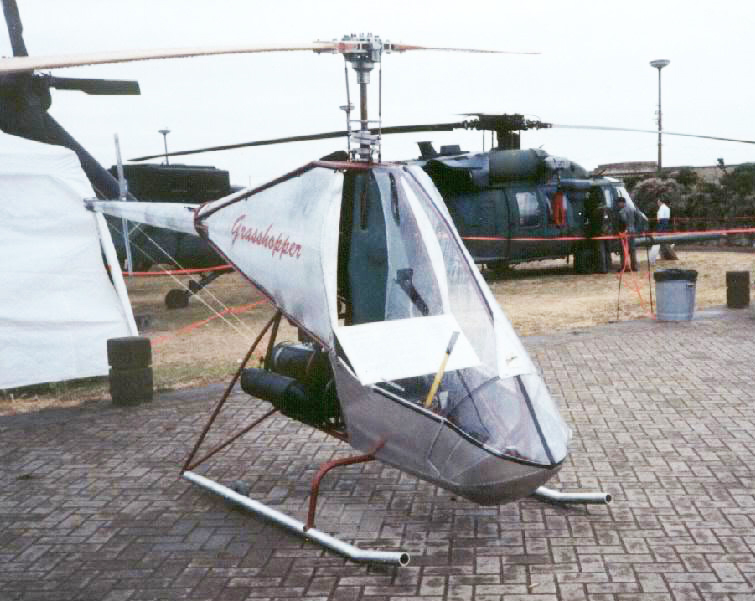 Ben Cope’s first design (Mark 1), the Grasshopper experimental helicopter. Powered by a two (2) stroke engine with its original skin and landing gear (later changed). This prototype helicopter is the first of Ben’s home made helicopter fleet.

The current specifications are: 20ft main rotor diameter with an 8 inch cord of NACA 0012 profile of underslung teetering rotor head design machined from solid alloy. The tail rotor has a 4 inch cord NACA 0012 profile. The main and tail rotor are driven via V-belts through a 90 degree gearbox to get drive from a horizontally mounted two (2) stroke Rotax engine. The empty weight is 385 lbs. My calculations say that it should lift with 500 rpm on main rotor, but it would lift of at 360 rpm.

The plan with this machine was to see if i could get the sums right. The machine proved very stable and vibration free. It was not my intention to do anything more than a tetherd test with this helicopter, it was purely to see whether i had the correct set up. I am now working on the BUG Mark 3 using a three cylinder BMW motorcycle engine and a lot of light weight composites to get that power to weight ratio improved. 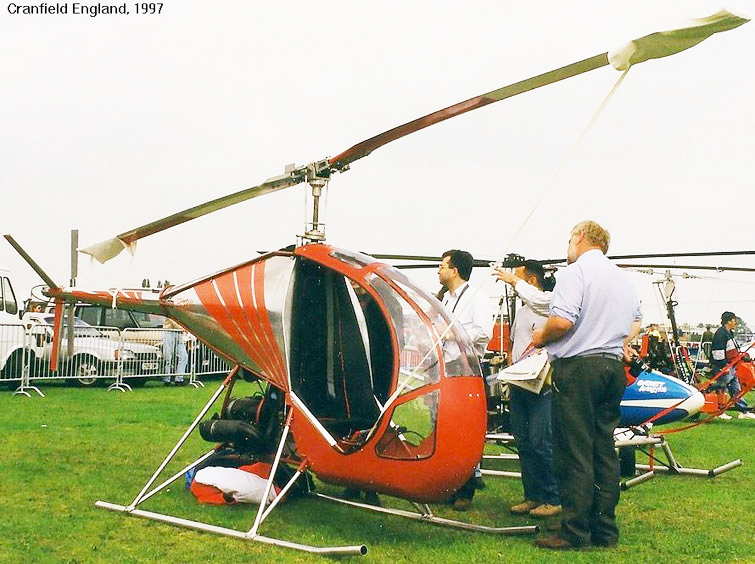 The Mark 2 Bug Helicopter by Ben Cope on display at Cranfield Airshow, England 1997. This picture shows the Grasshopper Helicopter with new landing gear and an updated body presented as the first in the line of “BUG” helicopters.

The blades on Bug 1 helicopter were hand carved/planed using templates, the wood type was spruce. When the shape was correct, I then applied a layer of glass fibre and then finished of with a gel coat to put the balance and centre of mass right. The finished blades gave me no problems at all.

Regarding the belts; The drive to the tail rotor worked fine, but because of the reduction required from the engine to the 90 degree gearbox in order to have a decent sized pulley on the crankshaft, the pulley on the gearbox needed to be about 2 feet diameter. Because it hovered, I just wanted to get on with the Mark 2 helicopter. You might be interseted in the latest machine I am working on! It is a 200 hp three and a half litre V8 tandem with three seats called RAPTOR. 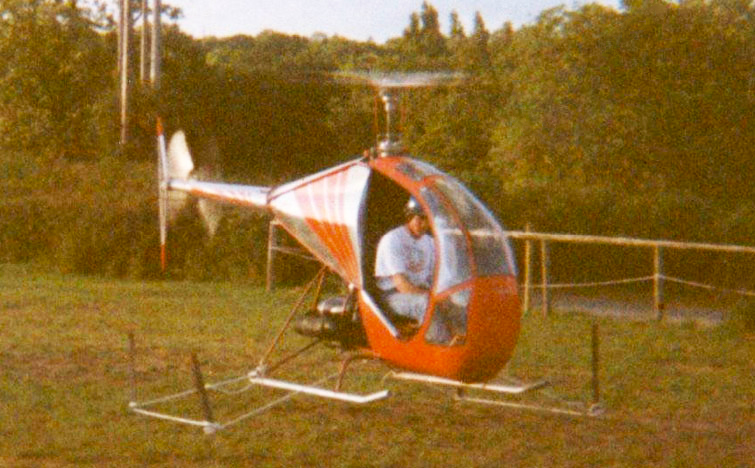 The BUG Mark 2 experimental helicopter taking to the air under tethered flight. A common procedure for helicopter flight testing.

The third machine, the BUG helicopter Mark 3 has a total all-up-weight of 500 lbs with a 20 ft main rotor span and is powered by a BMW 750cc watercooled motorcycle engine. Rotor blades are shortened Robinson R22 helicopter with a carbon kevlar composite blade root.

The tail rotor is constructed of carbon fibre and driven via conventional drive shaft to the tail rotor gearbox. Cyclic and collective controls are via push pull cables similar to Rotorway Exec helicopters with a device that permits the phase lag to be manually adjusted during testing. 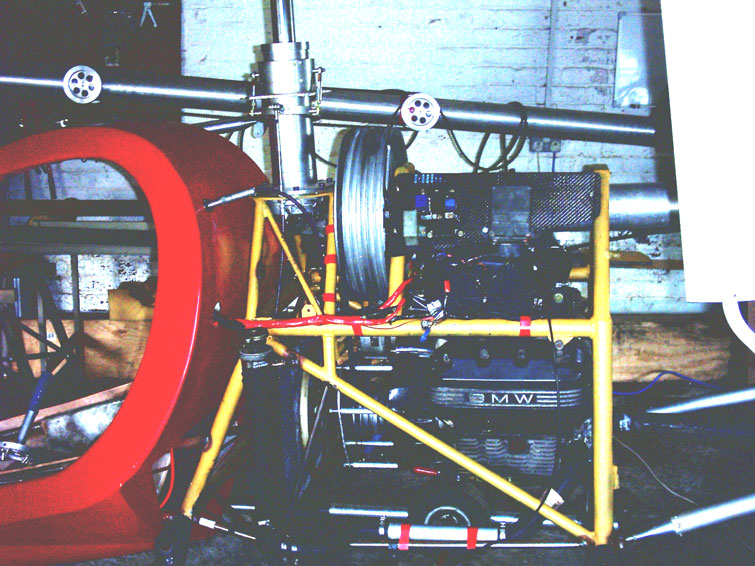 Power is transmitted via 5 V-belts with the engine being pivoted at its rear end and is pushed down by a motor and worm gear drive to tension and engage the belts. The landing / skid gear is a mixture of carbon and alloy. The screens are blown from polycarbonate. 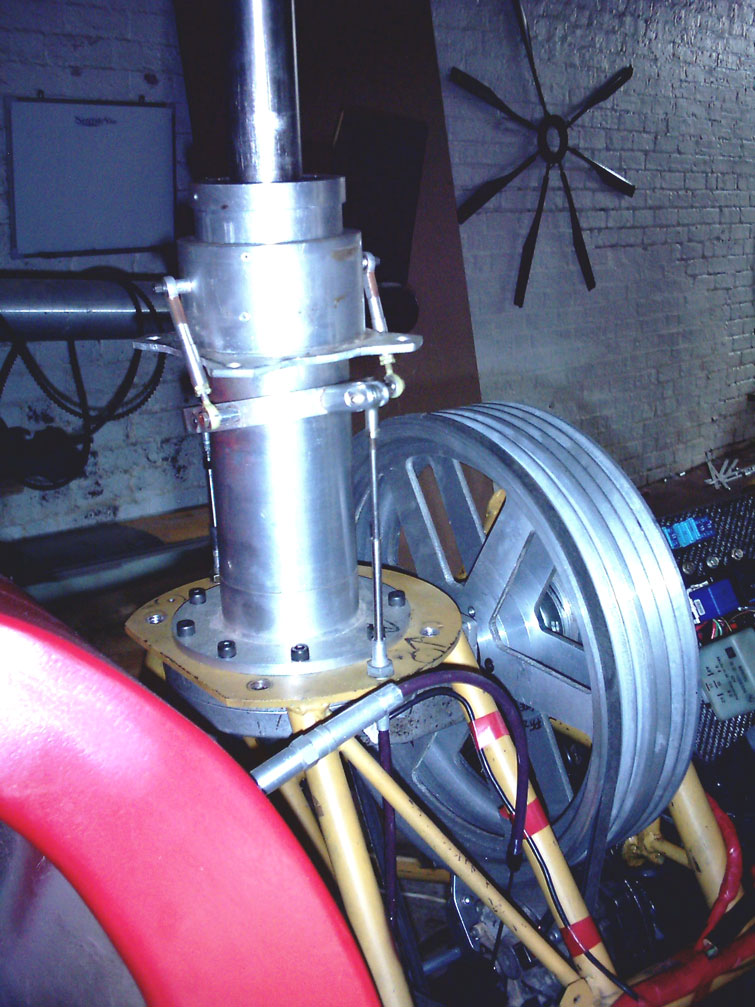 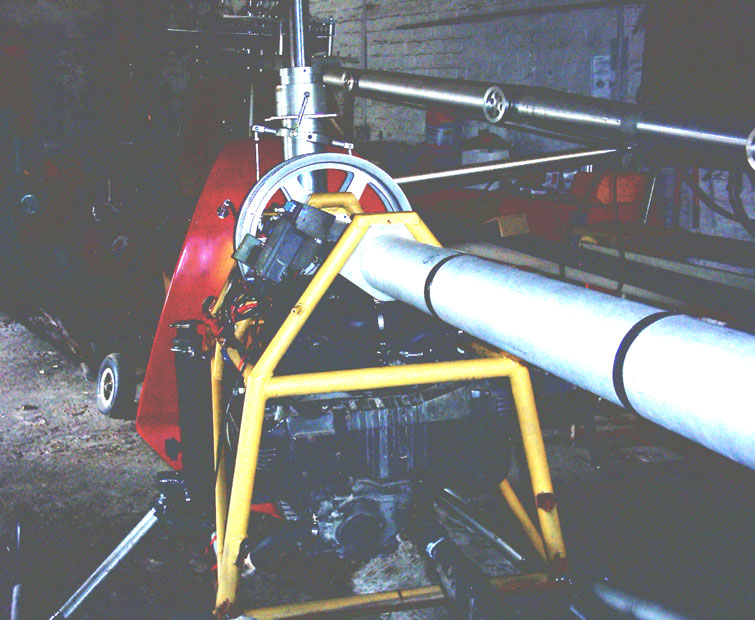 An aft view taken from the BUG helicopters tube tail boom looking towards the rear of the BMW motorcycle engine. The airframe appears to be quite sturdy and believed to be of welded aircraft chromoly steel.