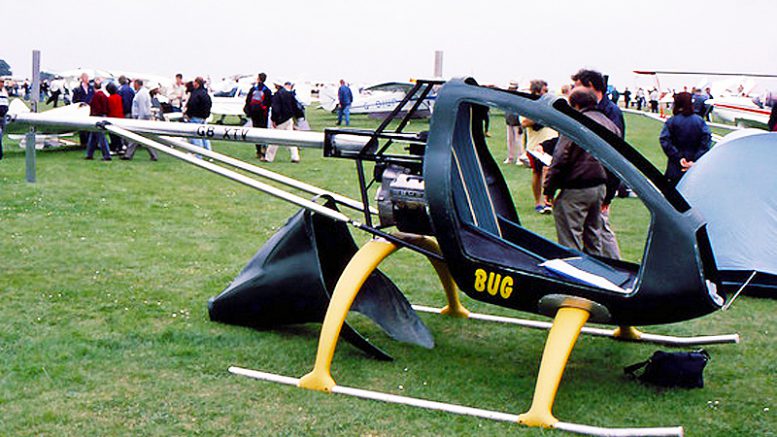 The following photos appear to be an updated “clean” version of the BUG personal helicopter series by Ben Cope, based on the Mark-3 BUG helicopter design. Differences here are the new, very modern looking composite cabin and nice, wide composite – impact absorbing landing gear (very useful in the event of any crash landing). The airframe also has changes to a more compact and simple design though retaining what looks to be possibly a newer BMW motorcycle engine. 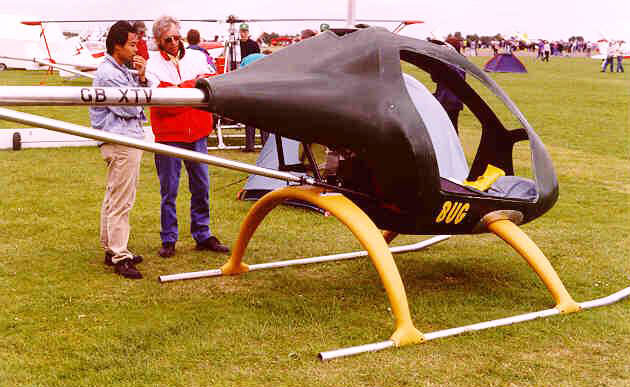 However, initial figures seem to support the idea that the aircraft does not have one. In fact, the confidence level is high following testing that the machine will be capable of performing damage free engine-off landings from a 25-30 foot stationary hover. This is all due to the revolutionary ‘rotor ring’ system, replacing the standard rotor blades, providing all the lift to keep this machine aloft.

In case you missed the previous article that featured a scaled down model of the rotor ring mounted on the BUG 4 personal helicopter at Seafront-Helidays at Weston-Super-Mare, in the UK, in July 2008 featured a full sized representation of the experimental rotor ring, with eight composite rotor blades joined at their outer tips by a composite ring.

However, it did not have the cleats at the tips that direct the air downwards, nor the ring profile of the intended design (the actual prototype was at that time in fabrication at Ben’s workshop in Worcestershire, UK).

The exhibit model was intended to demonstrate the full size of the ring, combined with the new aircraft’s design features.

The eight composite blades are each seven feet long with a four-inch chord, attached to a gimballed rotor head and joined at their tips to the ‘lead-loaded’ (that’s element pb in case it’s called something else in American English) composite ring.

The cockpit of the BUG4 personal helicopter is composite, with aluminium tubing used to support the glazing and for the ‘skid-type’ landing gear. The ship’s tail boom is also aluminium, the profile being two flat parallel sides about 2 inches apart joined by a curved top and bottom.

A composite fin is attached to the tail boom, the tail rotor is also of composite material. The helicopter utilizes conventional cyclic and collective controls via standard swash plate system.

Electrical power for engine ignition and flight instruments is from a 12-v battery and an engine-driven generator, there are no communications fitted to this demo aircraft. 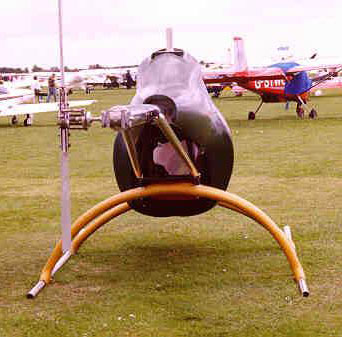 To go with the new helicopters design is a move to a smaller and lighter 600cc, 90 hp, Yamaha water and air-cooled, motorcycle engine (BUG3 had a 75 hp BMW K75 motorcycle engine). Main rotor is chain driven from the gearbox, with a tooth belt drive for the tail rotor.

Most of the helicopter’s framework consists of flat plates of metal that are easily produced by standard spark erosion processes and this lends itself to simplified fabrication should the need arise to produce a kit or complete helicopter, if the market dictates it.

Everything on this machine has been designed for simplicity and lowest cost for both fabrication and marketing resulting in a neat and compact little helicopter.

In fact talking with Ben at Weston-super-Mare, he felt that the whole of this machine’s structure could be produced for around UK 12,000 pounds.

NOW MORE OF THAT TECHNICAL STUFF

With the university study/tests coming to a conclusion, the one man helicopter should be entering the transitional flight test stage shortly, following the ground testing of the rotor ring itself.