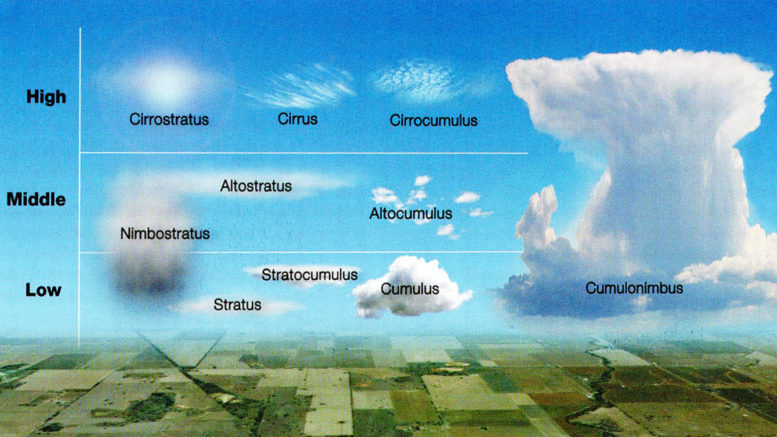 Reading The Weather Up There

Clouds are messages that tell pilots what’s going on with the weather. As Philip Smart explains, the safe conduct of a flight can rely on a pilot’s ability to interpret those messages correctly.

EDITOR: As a youngster, I surfed most of Australia and different places around the world. I spent my first few years as a Life Saver at Ocean Grove family beach. This was an invaluable experience…why you ask? – and what does this have to do with Aviation Weather? Well, the one essential tool of the sport is the ability to

I had a very high success rate with finding the best waves and being in the right place to catch them. So what does this have to do with flying? Reading the weather allows you to plan, avoid and enjoy every flying situation you encounter. Knowledge is power, and knowledge is SAFETY!

One of the myriad ironies of flying is that handling the weather can be a private pilots greatest source of both frustration and satisfaction in a single flight.

General aviation aircraft have to share the sky with clouds, so knowing what the various types mean can be key to a safe flight.

For weather-seasoned pilots there can be a sense of satisfaction when the wheels kiss the tarmac at a destination, having planned well to side-step that storm front, picked their way through annoying but manageable weather and even hitched a tailwind ride from weather that was going their way.

There is also an appreciation that the only way to accomplish an intended journey from one part of the world to another today will depend on understanding of how that natural world works, of becoming part of that environment rather than a casual observer.

For many this realization of aviation weather is just part of the puzzle that makes flying a way of life, not just a hobby. 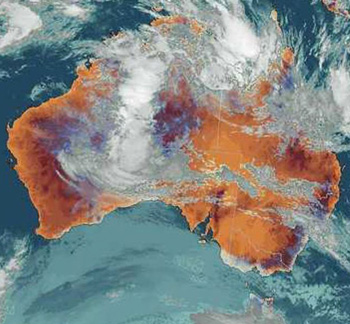 The sheer size of cloud formations can be seen in this Bureau of Meteorology satellite image. IMAGE: BUREAU OF METEOROLOGY.

His “Essay on the Modification of Clouds”, (in the scientific community “modification” could also mean “classification”) wasn’t the first attempt at providing a standard nomenclature for cloud formations, but as the first to use the universal language of Latin it gained more widespread acceptance than previous systems based solely in French or English.

It is from Howard and his understanding of Latin that we gain the major cloud categories of Cumulus, from the Latin “cumulo”, meaning heap or pile, Stratus, from the Latin prefix “strato”, or layer and Cirrus, Latin for “lock of hair”.

He also identified a series of intermediate and compound modifications, such as cirrostratus and cirrocumulus and wrote on the importance of clouds as visual signposts illustrating the state of the atmosphere and offering clues as to what might happen next.

“Clouds are subject to certain distinct modifications, produced by the general causes which affect all the variations of the atmosphere; they are commonly as good visible indicators of the operation of these causes, as is the countenance of the state of a person’s mind or body,” Howard wrote.

Today Australia’s Bureau of Meteorology recognizes 10 main clouds types, further subdivided in to 27 sub-types according to their height shape, color and associated weather. And a few more Latin terms have joined the lexicon.

A cloud producing rain will include the term “nimbus” in its name, while fragmenting clouds may carry the “fractus” suffix. Clouds are formed from evaporation of water from the earth’s oceans, lakes and rivers and transpiration from plant life.

As this moist air rises it reaches altitudes where the air pressure is lower, so it expands and cools. As air cools its ability to hold water vapor decreases, so the air becomes saturated and some of the water vapor condenses in to water droplets, forming clouds.

The type of clouds visible point to the stability in the air around them. Moist unstable air will continue rising, forming cumulus clouds with tops that continue climbing. This type of cloud is usually associated with turbulence, sometimes with short, sharp rain showers but good visibility between the showers.

Pilots operating in Australia’s tropical north are familiar with these aviation weather conditions, with one telling Australian Flying that his Bombardier Dash-8 couldn’t climb as fast as the afternoon cloud tops out of Darwin.

This can also be good weather for glider pilots, as rising columns of air that remain warmer than their surroundings will continue to rise, creating thermals. A rising parcel of air that achieves the same temperature as the ambient air around it will stop rising and become part of a more stable atmosphere.

Stratiform or layered clouds are more likely to he formed in this instance. With more stable air rain will be more steady, with generally smoother air and less turbulence, but also the potential for fog. While cloud formation is generally caused by a body of air rising, the reasons for its movement can vary.

Convection is when a layer of cooler air is moving or laying over a warmer layer beneath, warmed perhaps by reflected heat from the earth’s surface or even air pollution from a city.

The warming effect from the lower layer will cause the upper layer to rise, creating turbulent air. Convection can produce some unusual effects for pilots, with two essentially separate weather patterns sitting on top of each other.

Helicopter pilots transiting from Esso’s Bass Strait oil platforms to their base at Longford in Victoria have reported occasional conditions where flights out and back at different altitudes can have a tailwind in both directions.

A moving air mass will rise as it meets a mountain or ridge, with the increase in altitude producing a decrease in air pressure that may form clouds.

The air mass may continue over the land mass and descend on the other side to increasing air pressure, with the clouds dissipating. With air rising to lower air pressures on the windward side of the land mass, that is often where clouds will begin developing.

Orographic lifting can result in cloud forming and sitting over the top of the land mass, even though the airflow is continuing through it. This phenomenon is often seen in the Pacific Ocean, where navigators since the days of Captain Cook have often identified the presence of islands by the cloud sitting over them.

It can also be the cause of regular cloud formations that become part of a regions normal weather patterns. Pilots flying to the east of the Great Dividing Range can expect cloud there whenever there is a westerly wind blowing.

Eddies from local land masses, ground temperature variations and local winds can all affect an air mass as it moves across the ground, creating turbulence that can mix air, change its temperature and force it to rise to a higher altitude, with the potential to form clouds.

While glider pilots look for fields of different colors, knowing that where light meets dark there will be a temperature change that may create an updraft thermal, powered pilots often try to avoid these situations and the bumpy flight that may ensue from turbulence.

Man-made temperature factors such as massed industrial factories can also enter the equation. The heat from burning cane fields in Queensland has sometimes been credited with triggering local thunderstorms by introducing a large mass of hot, rising air in to an already unstable tropical weather system.

Widespread ascent is often characterized by weather fronts, as two adjacent air masses meet and slide over one another. Although the boundary between the masses is called a front, it is rarely a vertical wall.

In some parts of Australia this meeting of land masses can generate rising air of considerable strength. A glider pilot from the coastal city of Whyalla in South Australia told Australian Flying of being airborne in a single seat glider during the approach of a front, with nose pointed vertically at the ground and speed brakes out and still hearing the variometer buzzing with a positive rate of climb.

When large masses of moving air meet, the result is not necessarily a front. The Doldrums, an area near the equator where the northeast and southeast trade winds converge, is famous among sailors for its long periods of slack winds in a trough of low pressure.

But convergence of surface winds with winds at even 2000 feet altitude can cause lifting. With sufficient moisture in the air, this may create widespread cloud cover along the line of the trough.

LEFT TO RIGHT: 1. Altostratus often deposits
good quality rain. 2. Something’s building over the range. What do the different cloud types here tell you about the conditions you’re about to fly into? 3. Bushfires can cause an unexpected build-up of cumulonimbus clouds, which is commonly referred to as pyro-cu.

Low cloud is generally cloud with a base from near the earths surface to around 6500 feet in middle latitudes. Low clouds by nature are generally in warmer air, so they are almost entirely water, but in some conditions can be at sub freezing temperatures and contain snow and ice.

Middle clouds are those with bases from around 6500 feet to around 23,000 feet. They are still primarily water, some of it super cooled.

Be the first to comment on "Aviation Weather – Reading The Sky"