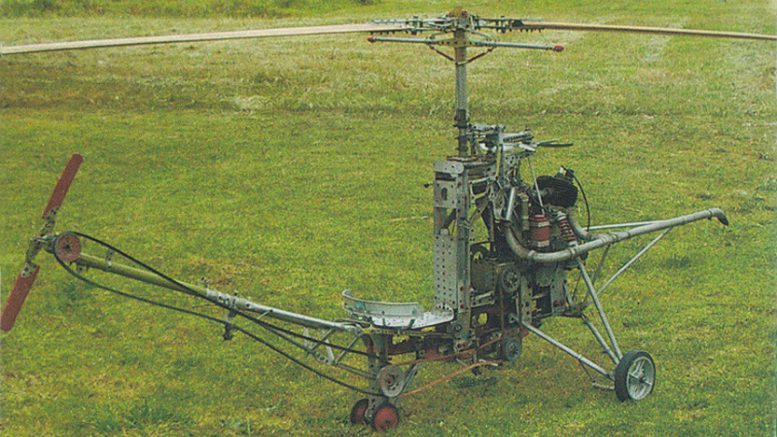 ABOVE : Early Australian homebuilt helicopter prototype, believed to have flow from its owners suburban backyard.
Note the long, forward facing exhaust and tail rotor within the main rotor disc – much like the early Adams Wilson and LoneStar helicopters.

Whilst looking around the motorcycle collection of an associate of mine, I spied this amazing machine sitting in the corner, a previously unknown Australian experimental helicopter. The present owner has some “fixed wing” hours under his belt, but is not a helicopter pilot. He bought the machine for its motor, a 1930’s JAP motorcycle engine: these motors were fitted to many different brands of British motorcycles pre WWII. Although not a helicopter enthusiast, he has an appreciation of machinery of all sorts and couldn’t bring himself to wreck the little helicopter for the motor.

This is actually the second time this machine has been rescued from the scrap heap. The story goes that when the original builder died (of natural causes by the way), his children dragged it out onto the footpath, ready to be picked up and taken to the rubbish. Apparently his next-door neighbour came to the rescue.

It was built in Melbourne (Australia) in the suburb of Black Rock and is believed to have been finished in 1948. It took around two years to build, which makes it a very early example of an Australian powered rotary wing flying machine; certainly the first helicopter built in Australia and most likely the first helicopter flown in Australia. Details of the designer / builder are sketchy; his name was Eric Adney, he was an accountant/bookkeeper and as far as I can ascertain, he had no flying experience or engineering training.

How many times it actually flew, and how high or how far is also uncertain. His neighbours at the time reported seeing the machine rise “above roof level” on several occasions, which suggests that the builder taught himself to fly in his suburban backyard! One of the two spare tail boom sections suggest that it was flown initially without a pilot, but if this is the case, how it was controlled is anyone’s guess; as radio control was still many years off. 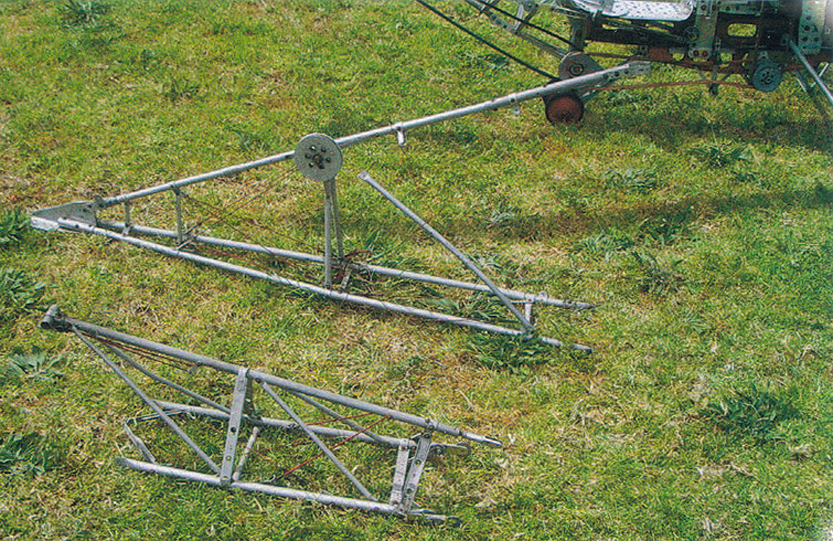 The machine itself is a masterpiece of backyard engineering; it has a wooden spar as the main airframe member, with all the rest of the airframe made up of bolted aluminium tube, there is no welding what so ever. There is also no machining to be found, even the right angle gearbox housing is bolted / riveted together.

It appears that the whole machine has been made with just a drill and hacksaw and maybe a vice). The aluminium tube and sheet appears to be of aircraft quality, probably obtained from war surplus aircraft, which were wrecked in thousands after WWII.

The sprung wishbone main suspension is amazing; it looks very modern in comparison to other early helicopters. It is possible to examine the machine for a solid hour and still find things that you missed an hour earlier. Designing and building it must have consumed several thousand hours of Mr Adney’s time.

The flight controls are “interesting” to say the least. The pilot controls the throttle, collective and tail rotor pitch with his hands, and the foot stirrups are just for support, as the pilot’s feet don’t contribute to the control of the aircraft.

There is no cyclic to be found, I assume that the forward/back and sideways movements were controlled by shifting the pilot’s body weight? The pilot’s left hand controls the throttle, whilst his right hand controls the separate collective and the tail rotor pitch control handles, which must have been a very difficult at the time, which I suppose were all still top secret in 1946.

The shape of the controls appears to have been inspired by the handle of a spade, beautifully reproduced in aluminium. Note the small extension on the collective that acts as a thumb rest.

The rotor head design is actually quite advanced; it is a “teetering hinge” design, with what appears to be a servo/gyroscopic action, acting on the blades from the lower mechanism, instead of a modern cyclic control. The pilot’s collective control alters the pitch of both blades via a devise that is made from what appears to be a car wheel bearing. It is not a true swash plate, as it does not tilt; only moving up and down.

Another feature demonstrating how advanced the design was the inclusion of a “one-way” clutch to disengage the engine from the rotor(s) in the even of an engine failure. It appears to have been made from automotive ignition distributor bob-weights! One oversight with the sprag clutch however, is that it only works for the main rotor, the tail rotor is still connected to the motor. I suppose it would still be better than nothing, but auto-rotations without a tail rotor would be an acquired taste.

The 750cc side-valve JAP engine (which still runs perfectly!!) was originally rated at around 15 kW (20 hp), giving a theoretical MTOW of around 90 kg (200lb). I would estimate the mass of the whole machine to be at least 60kg (135lb), so the pilot must have been a lightweight. The 10:1 (lb/hp) power to weight ratio isn’t set in stone, but it is a pretty close guide, so either the pilot was very light weight or the JAP motor has been souped up quite a bit, 20-22kW (27-30hp) should be achievable. 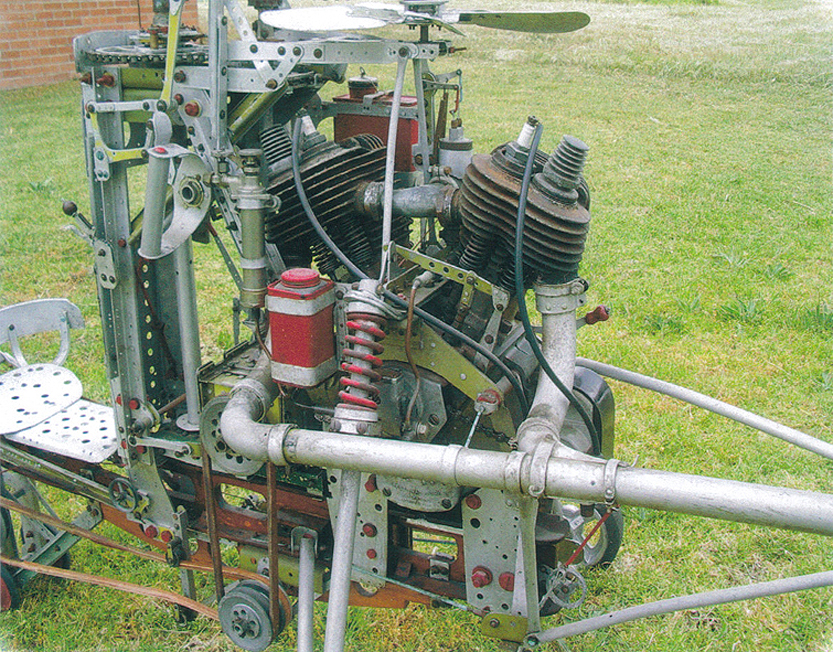 It appears that the little machine is still quite airworthy, or as airworthy as it ever was. It has always been well stored, and there appears to be no corrosion. However, with the main rotor bolts clearing my head by less than 50mm (2 inches), I was not about to offer to take it for a test flight. I assume that the builder was somewhat shorter than my 190cm (6ft 3inch) frame and probably more than a little lighter too!

I have discussed this little machine with quite a few of the older chaps in the Australian experimental aircraft scene and none knew anything about it or its builder. Could it be that the builder kept a low profile intentionally, worried that his machine might be confiscated by the authorities if they discovered it? (Amateur built helicopters were not allowed in Australia until quite recently). Whatever the reason, it seem she had no desire to show off his creation, or even to tell anyone about it.

I can’t help wondering if the genesis of an Australian experimental helicopter building industry was squandered for fear of the regulators of the time. That a gifted amateur could build such a sophisticated little machine in his backyard in the 1940’s still amazes me. There must have been scant information on helicopters available to the general public at the time, particularly in information starved Australia (and the internet was still 50 years away!)

Backyard innovators and experimenters like Arthur Young in America were the driving force behind great designs like the Bell 47; one can only ponder the designs that Adney could have inspired had he been given the opportunity. To put Adney’s design into context, it should be remembered that Bell hired Young (after seeing his models fly) in 1941, which is only five short years before the commencement of the design / construction of Adney’s great little machine. 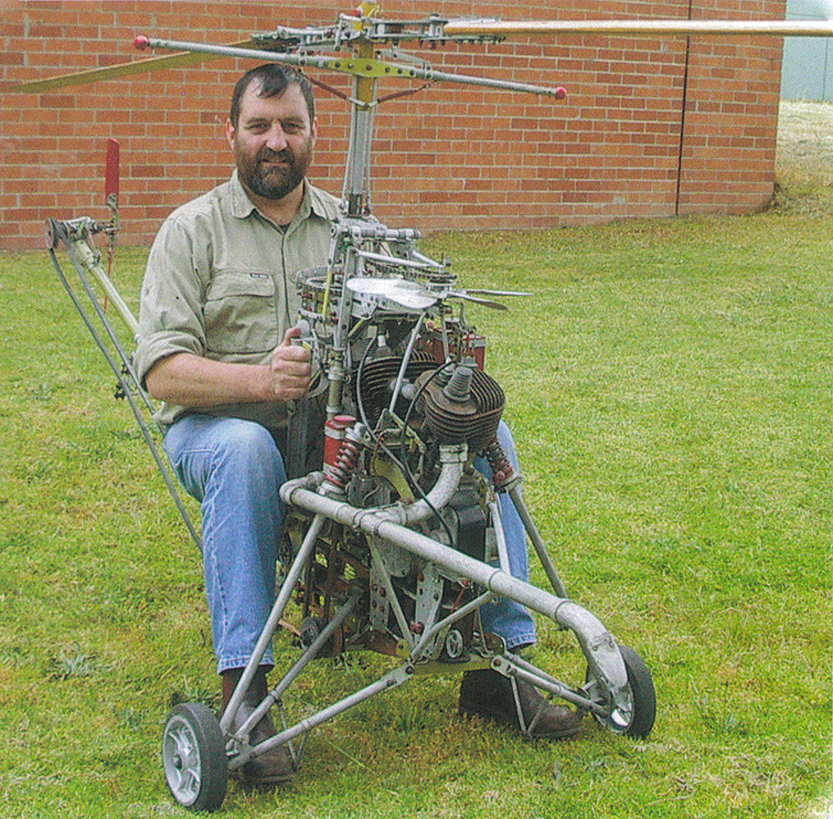 ABOVE : Mr. Eric Adney – to my knowledge, has built the smallest “single-seated” helicopter I’ve ever seen. In this picture, Ian displays his courage limit as far as flying this little and very early Australian helicopter design.

The present owner has no plans for the little machine, other than preventing any deterioration. I think it deserves to be seen by helicopter enthusiasts = whether that be in a museum or at air shows, it will certainly become a talking point.

Ian Drysdale – can be found through Drysdale V8.