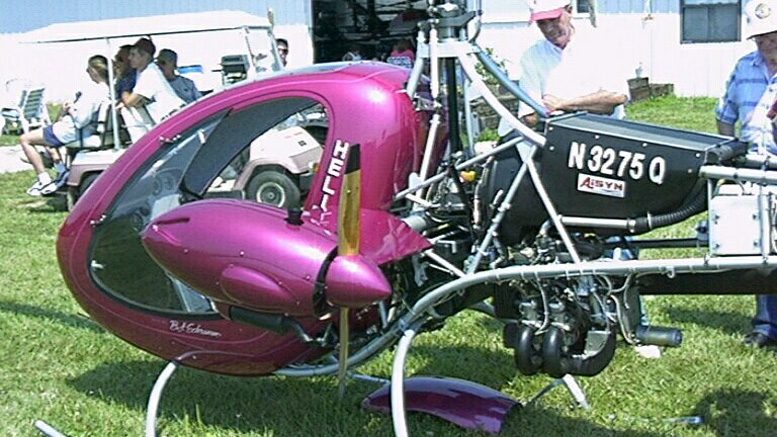 Turning and Learning… Rotorcraft Design, According to B.J. Schramm

Few people have the potential to turn the sport rotorcraft world upside down as does the inimitable B.J. Schramm. Long lauded as one of sport aviation’s most talented sport rotorcraft designers (he was responsible for the design of the original Rotorway Scorpion and the Exec) his Helicycle compound kit helicopter is nothing short of spectacular.

Schramm is a soft-spoken engineer of immense talent and great vision… especially now that he is targeting the topsy-turvy single-place helicopter kit market with a craft that promises more performance for half the money of the competition… and far more features to boot. 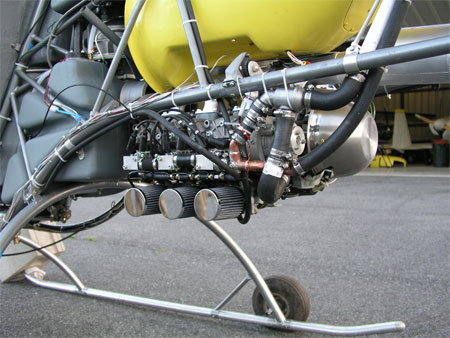 Schramm’s efforts are pretty extraordinary when you consider the scope of his Helicycle compound kit helicopter plans. He is endeavoring to produce a truly usable helicopter that offers a minimum of 1500-hour service lives on all critical and/or life-limited components, and true cross-country utility. Yes, this is a pleasure craft, but B.J. wants to make sure that it is no toy.

His latest dream machine can be built and/or flown in two versions. The basic Helicycle compound kit helicopter is a Rotax 618 powered single-seater of 395 lbs. With 277 lbs of load-lifting capability, the Helicycle’s 12-gal fuel capacity has a range of 160 miles (with reserve), a cruise of 90 mph, and a climb rate of 900 fpm.

Its max airspeed is some 105 mph and it has an impressive HIGE (Hover/In Ground Effect) capability of 6500′ and a service ceiling of 9000′. The basic ship is expected to have an entry level price of under $18,000… half that of most of its competition.

The left stub wing has a 45-hp Zenoah engine attached. Additionally, the Rotax 618 can also be turbocharged for compound operations, which boosts total available hp from the Rotax to 70 (mind you, the turbo system is not used on this craft just to boost power, but to provide greater power at higher altitudes). 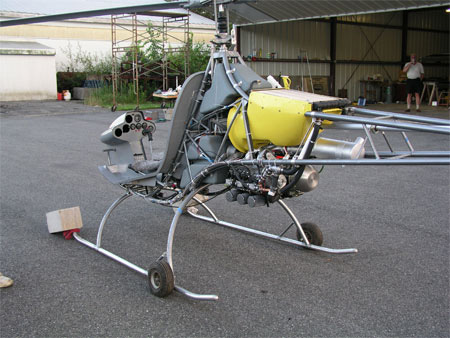 The combination of both engines produces a significant performance increase… especially as the little Zenoah offers a 30-mph speed boost over the single-place version.

The engine is mounted on the left side to counteract the side thrust by the tail rotor, so there is no need for similar power on the other side. More than simple performance increases, however, the compound version also boasts the unparalleled safety of ample system redundancy and mission reliability.

The amazing thing about the Helicycle compound kit helicopter is that the compound mode offers the ability to continue flight should either engine fail! if the stub-mounted Zenoah fails, the helicopter acts as a simple helicopter, with only the slight drag penalty of the additional engine and stub wings attached.

However, if the Rotax fails, the Zenoah can be used to power the aircraft (with pilot adjustments to collective pitch) in a gyroplane style mode… where the blades would be, in effect, in autorotation, but the stub-wing engine would be playing pusher.

In this mode, the Zenoah apparently can fly the Helicycle compound kit helicopter at speeds similar to those offered by the sole Rotax. Very cool, eh? Among a number of other prime considerations for the Helicycle is its ease of operation.

First and foremost, the aircraft must have good handling and performance capabilities through the asymmetrical low-drag rotor system during total power-out autorotation incidents. B.J. is designing a fair amount of mass inertia into the entire rotor system in order to offer pilots reasonable safety margins in the reaction times needed to avert problems.

The Helicycle helicopter blades will have small tip weights to help with that, but the entire blade will be very stiff and of sufficient mass to avoid Whirl Mode Instabilities associated with blades relying too heavily on tip weighting to provide for greater relative mass inertias.

Further, maximum safety margins are being incorporated into the structural integrity of the cabin under high-impact scenarios, should someone still wind up screwing the aircraft into the ground. The cabin has a “crush sequence” designed to let the fuselage structure take the brunt of the damage before transferring impact loads to the cabin.

The Helicycle helicopter rear landing gear tube is attached to the frame in a pivoting configuration which allows it to straighten out under extreme load and absorb a fair amount of impact energy. Following that, the lower airframe tubes, just behind and below the pilot, crush upwards but away from the pilot. 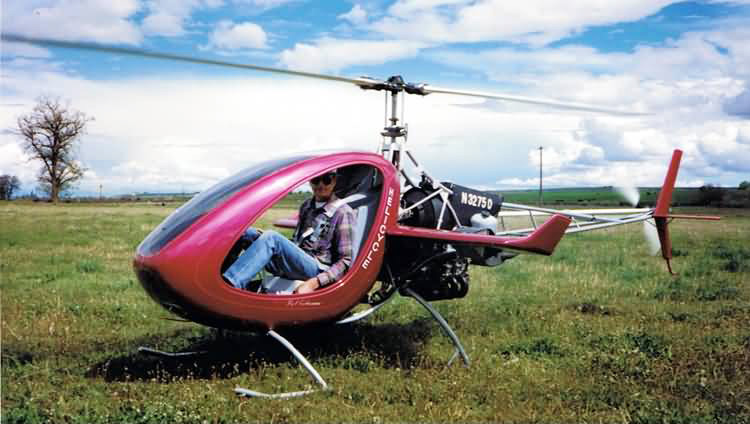 A 2″ layer of aluminum honeycomb resides in the seat well, which will take a fair amount of the load (and transfer it away from the pilot’s spine), in addition to a temper foam seat pad that can also isolate residual energy.

Finally, B.J. tells me there is some 20″ of airframe structure that will deflect impact energies away from the Helicycle compound kit helicopter cabin area. This is going to be one tough baby…

It will be at least a year before B.J. finishes prototype development and freezes the design in order to start production… but his plans for production are pretty specific and fairly solid after the popular reception he received at Oshkosh.

His goals are clear: higher component reliability than any other sport rotorcraft currently in production, a great deal of system redundancy, and true versatility brought about through performance and cost-effectiveness.

Everything I’ve seen so far of this aircraft is impressive as all get-out, and some of the thought given to various design criteria exceeds any other aircraft ever offered to the kit builder.

If all goes well, hundreds of these things will be flying within a couple of years, and we expect to be one of the first to try it out. Yes, we do plan to fly the Helicycle compound kit helicopter prototype… but not until a second bird is flying. In all things B.J. takes a conservative bent… and we’ll all surely benefit from that. FMI: Eagle Research and Development. 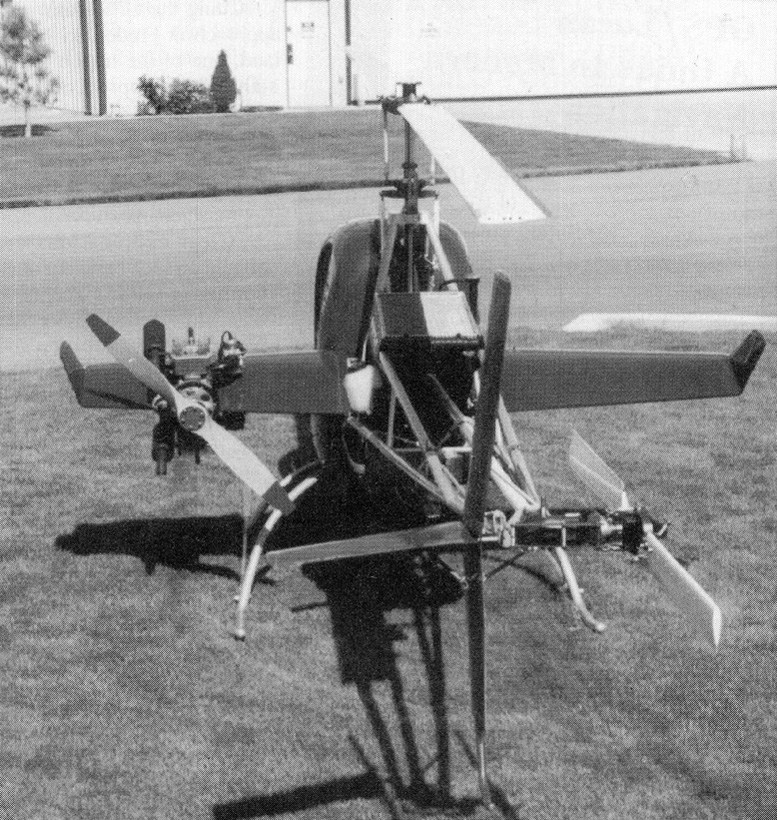 At the 1995 EAA Fly-In Convention at Oshkosh, renowned homebuilt helicopter designer B.J. Schram, had on dis­play a new kit helicopter, the Helicycle. “After being absent as a Sport Aircraft Manufacturer for five years, I am delight­ ed to return this year, and thankful for the miracles which have taken place to make it possible,” says Schram.

“The Helicycle is our first simultaneously engineered machine. Its configuration, performance and afford­ ability are the result of this next-generation process. In addition, it’s the world’s first compound-kit helicopter,” Schram says.

The entry level price is $14,000. The helicopter reportedly has the capability, with options, to cruise 120 mph on multiple engines. It is designed to take off and land at 10,000 feet.

FROM THE NEWS DESK (2011): HELICYCLE – www.helicycle.com There has been some talk floating around about blade flutter on the Helicycle. I have three cases and possible a fourth that I know of that are very probable examples of blade flutter.

Since there a bunch more flying without reports of flutter, ( of course the fact that I had one under construction had something to do with my interest), I was prompted to look into the blade flutter phenomena a bit further. See the article located elsewhere.

Bottom line is that there is apparently a simple adjustment that seems to eliminate the particular flutter in the normal operating range from occurring. Breaking News: (Just like CNN) Just heard of a new blade erosion tape to be demonstrated by an Australian entrepreneur, on a Helicycle. Details, date and location are presently TBD. Will follow up on this for sure. 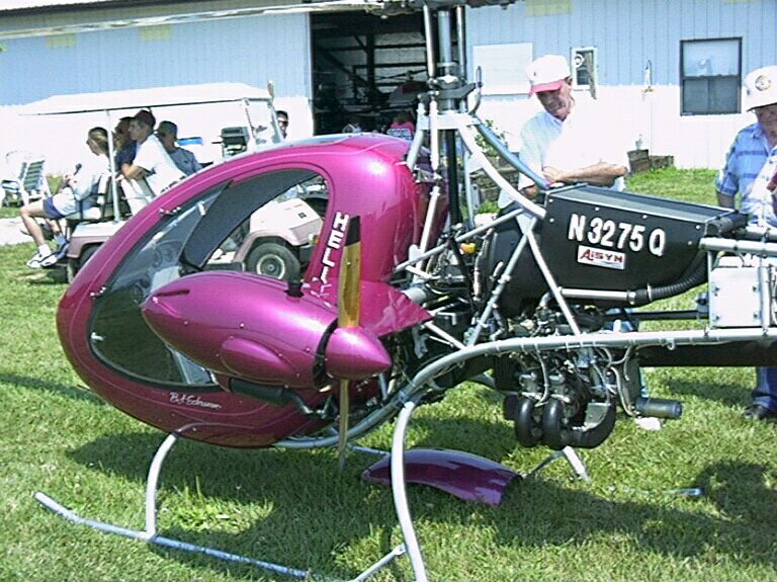