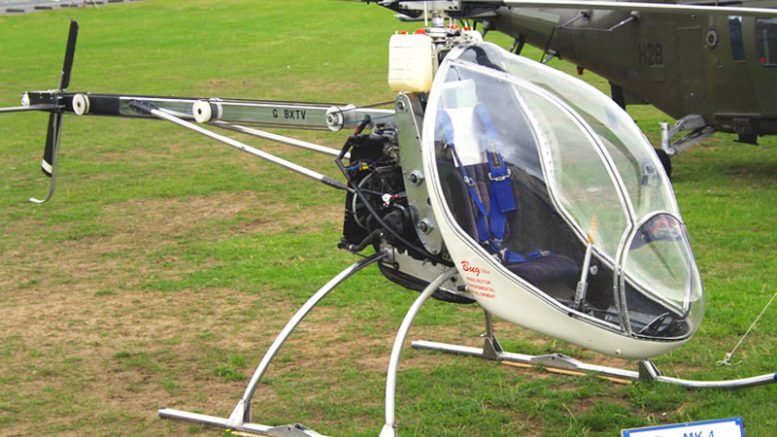 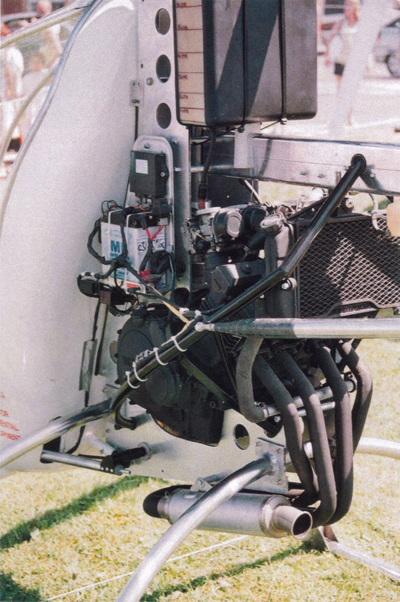 The Bug helicopters tail rotor blades and sliding guide tube are made of carbon fiber, the shafts are made of titanium ensuring strong and smooth operation during the experimental Bug Helicopter hovering tests.

The degree of movement to tension the belts has minimal effect on the center of gravity which remains within its limits with up to two inches of tail movement.

The helicopters drive belts, rotor blades and linkages have undergone several hours of full load and movement testing on the ground.

To date, there have been no problems. May I quote Otto Lilienthal “It is easy to invent a flying machine, more difficult to build one, to make it fly is everything”.

I had considered traditional test methods such as tethers, mechanical restraints of some kind, or possibly just going for getting skids light and then an inch or two clearance etc…into transitional lift.

Having had a previous machine do a 180° in the blink on an eye, I am considering short tethers for initially getting light on the skids.

Then confirming tail rotor authority and after that, if all is well, proceed to small field hops forward etc… 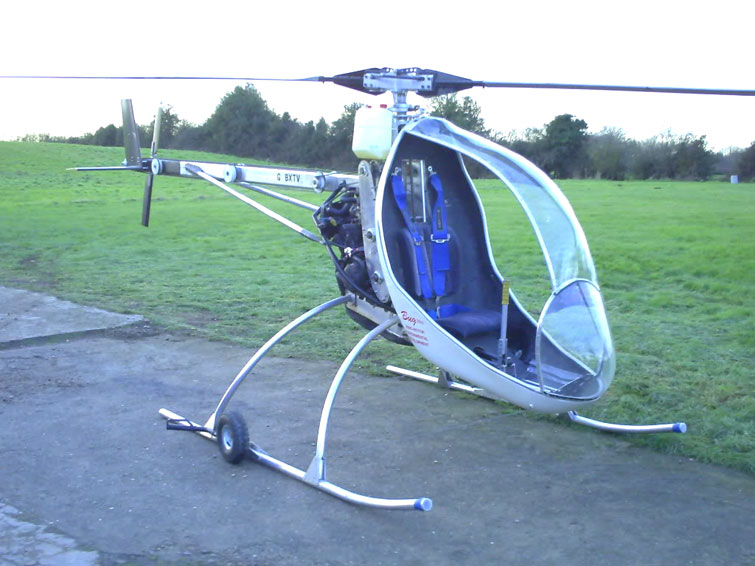 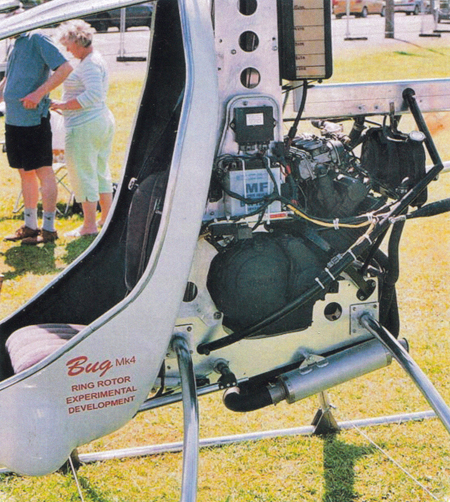 The device the young lady is holding on the previous page is a test model for my ring rotor.

This enables me to acquire great inertia without the penalty of heavy blades or rotor hub.

The outer ring constrains the inertial forces (depending on its elasticity) and also allows me to put the weight where I want it.

It does however produce some unexpected flotation modes within the blades themselves.

FDI analysis indicates an improvement in lift especially around the tips without any teetering rotor mast bumping to worry about.

The improved performance on the tip loss factor overcomes the additional drag of the helicopters rotor ring itself. 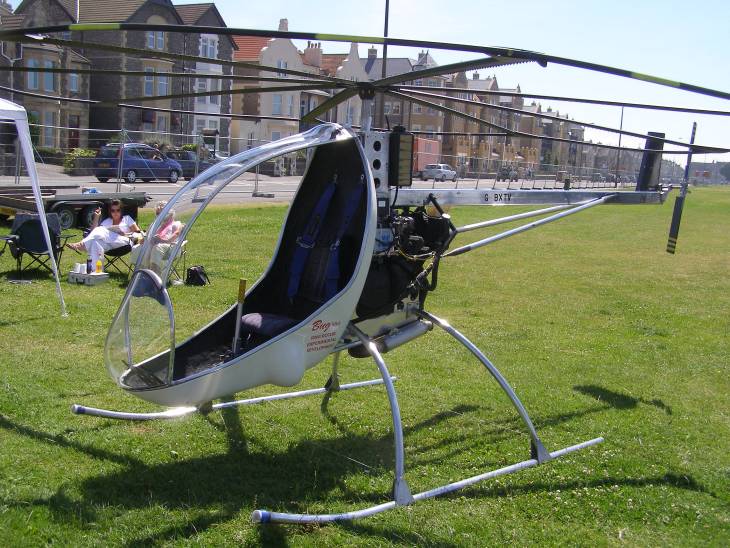 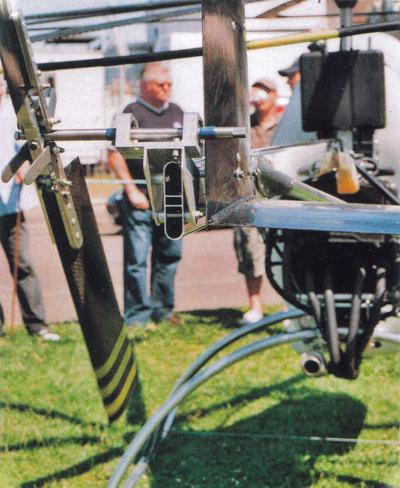 The answer is I have no idea as yet of what the optimum offset should be.

This is because we have a situation where each blade is influenced by the preceding and following rotor blades.

All data to date has been acquired by:

(a) running a test rig where the helicopters rotor is gimbal mounted and has been free to teeter, or

(b) FDA carried out by a university for me, where it was treated as a simple rotating fan.

I will eventually have to resort to my usual method which is make it, try it, if it does not work make it again with the experimental Bug Helicopter hovering tests.

I have found that using this method the third attempt is usually somewhere near the mark.

The flutter you see is not a shadow, its a slack belt while conducting the experimental Bug Helicopter hovering tests.

I have now completed around five hours of tethered testing. The only failure so far has been a flex-plate fracture between engine and drive-chain. 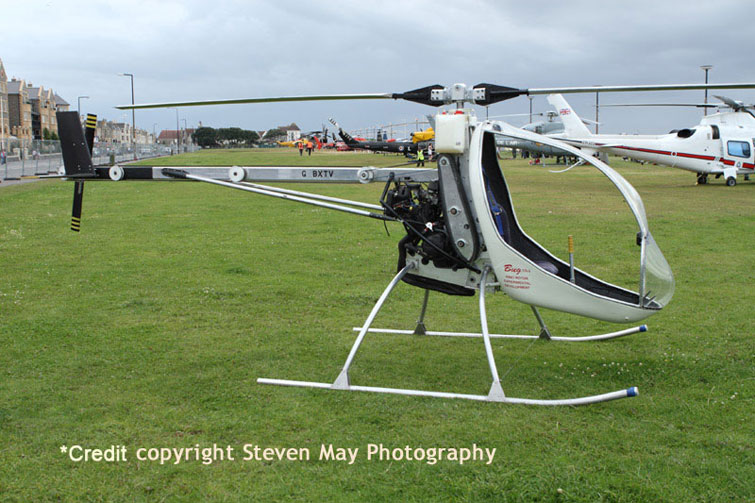 A balance check showed that I needed about three pounds on the front at two feet in front of the mast. Have now fitted doors and its made things level again. Must have lost a few pounds myself during testing… thanks BUG helicopter.

Many thanks for you supportive and constructive comments, I’ve learned a lot through the rotorcraft forums online. 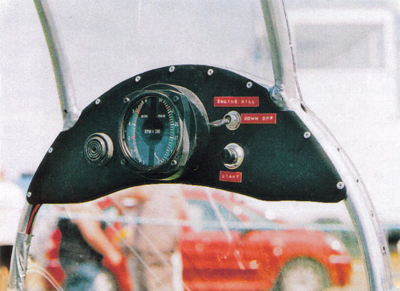 I should make it clear that I lay no claim to being a qualified pilot or for that matter particularly clever.

Having to make your own helicopter stems from having a passion about something and not money to pursue it in the normal manner.

Regarding the machine (helicopter), a new sprag clutch is on order and hopefully within the next week or so I will be attempting to get it off the ground.

Looking at the Rotorway helicopter video I feel tethers are going to be my first choice for testing.

Having pulled it light on the skids already I know my brain was buzzing a bit with senses overloaded.

I think at the moment, I may not handle the “Full Monty” if anything happened that pushed me past my limits – essential is too get some more time under my belt to get past that notion.