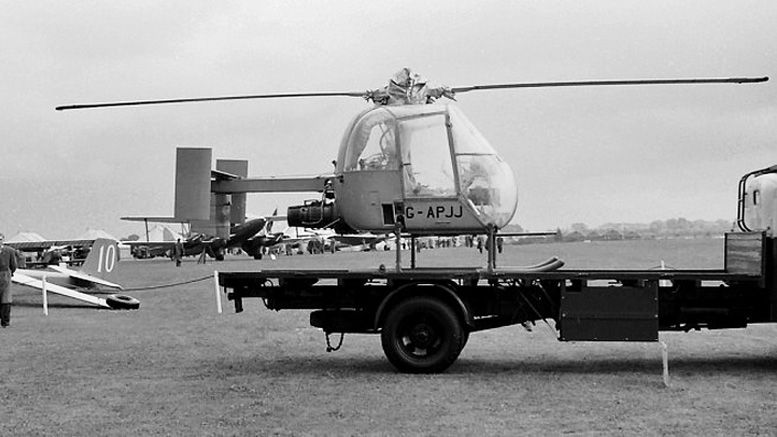 The Fairey Ultra-Light Helicopter only flew for the first time on 14th August, yet proved very agile when demonstrated, showing the pilot’s confidence in his mount. 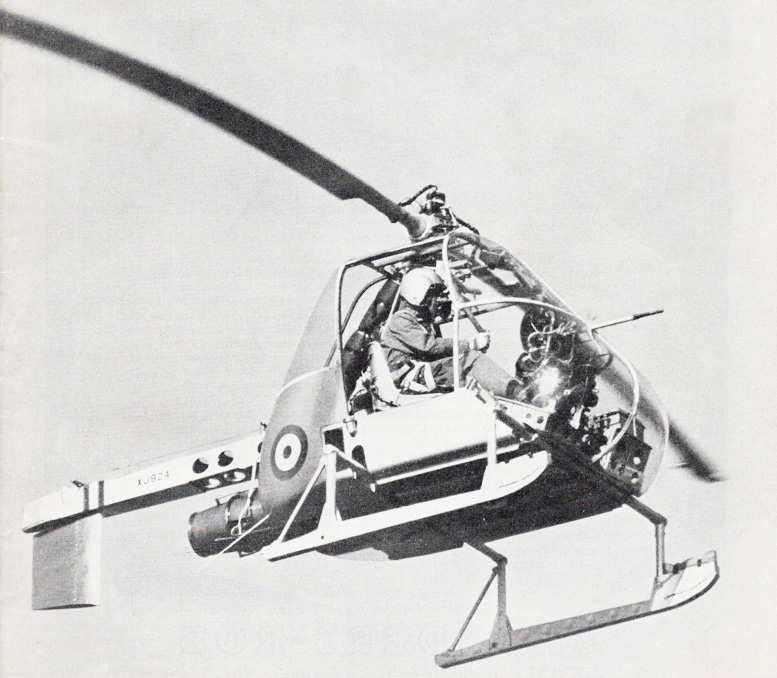 It was a pity that after making a point of the 360-degree crew vision given by the rearward-facing second seat, the flight demonstrator should have had an auto-observer and the stand model the seat the wrong way round—i.e. both seats facing forward.

Designed and built to an Army requirement in some eighteen months, the F.U.L.H. is delightfully simple. The Fairey Ultra-Light Helicopter “hull” consists of a box base, containing the fuel tanks, upon which all the major components are mounted, either directly or indirectly.

A forwardly-inclined light-alloy box beam carries the rotor head and a box girder the tiny rudder. The B. & G.A. Palouste compressor is bolted to the rear of the base, with air intakes at the sides, the elemental unsprung skid landing gear is attached to the base, the seats, controls and instruments are mounted on it. 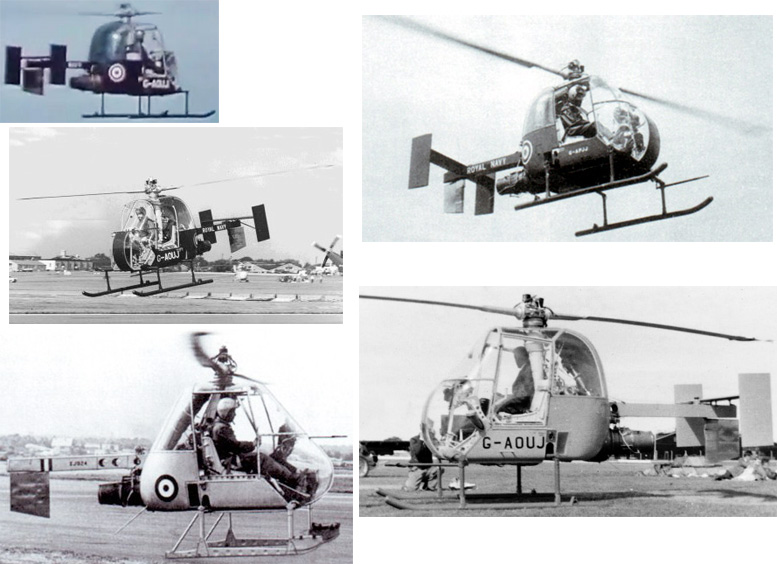 A light tubular framework of the Fairey Ultra-Light Helicopter carries the enveloping transparent covering. The rotor design is likewise simple: two bladed, with bob-weight “stabilizers” on arms at 90 degrees to the blades and, instead of cyclic pitch, a rocking head with hanging-stick control.

The high-pressure air from the Palouste is fed up a lagged pipe to a distributor at the rotor head, whence it is centrifuged down the spars to the tiny tip combustion chambers. Fuel is pumped separately to the blade tips, where it burns automatically once initially ignited. 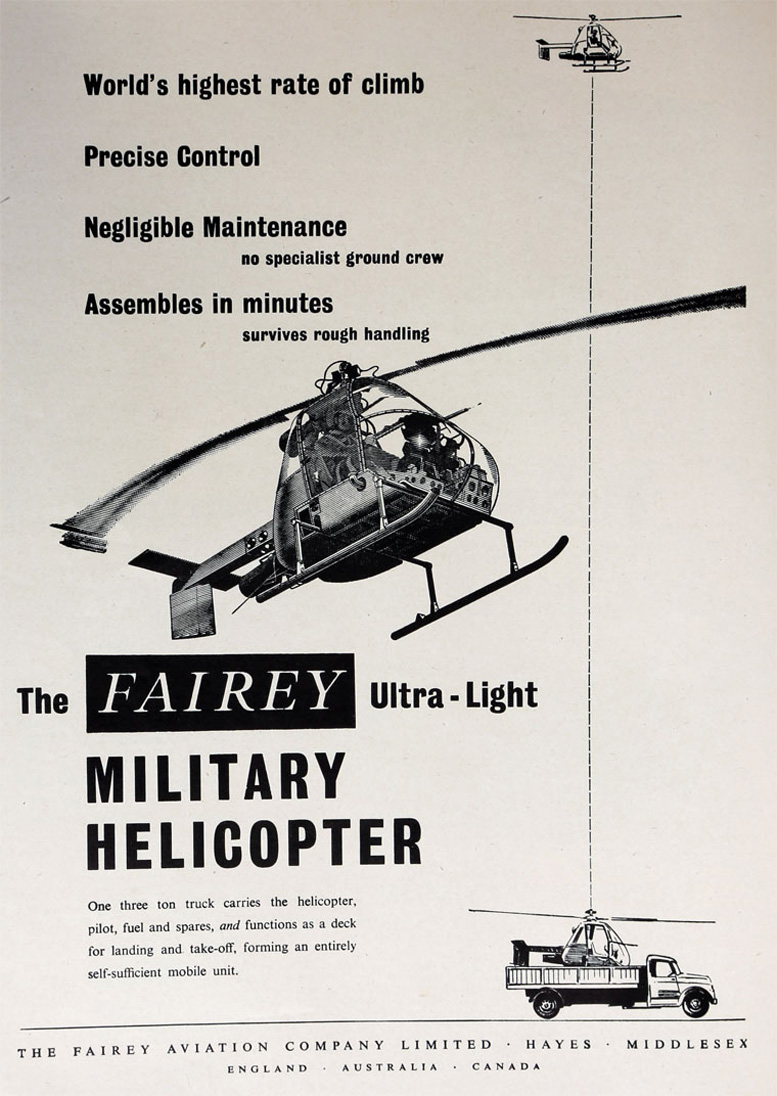 The small dimensions of the “pressure jets”, as Fairey calls them, suggest that the gases are exhausted at fairly high pressure, since there is no space to expand them to atmospheric, as is done with jet engines.

In the case of this small high-energy rotor the loss of thrust in the wasted pressure has been accepted as worthwhile because of the low drag of the tiny chambers—this point would be emphasized in autorotation and might well give the pilot more lime than usual to reduce pitch before the blades stalled.

Residual thrust from the Palouste is probably sufficient to contribute to forward propulsion. To see two examples of a new aircraft at once (even if one had some plywood parts) is quite an event and augurs well for production.

A civil version of such a handy, and obviously relatively cheap, Fairey Ultra-Light Helicopter should have a good agricultural future. 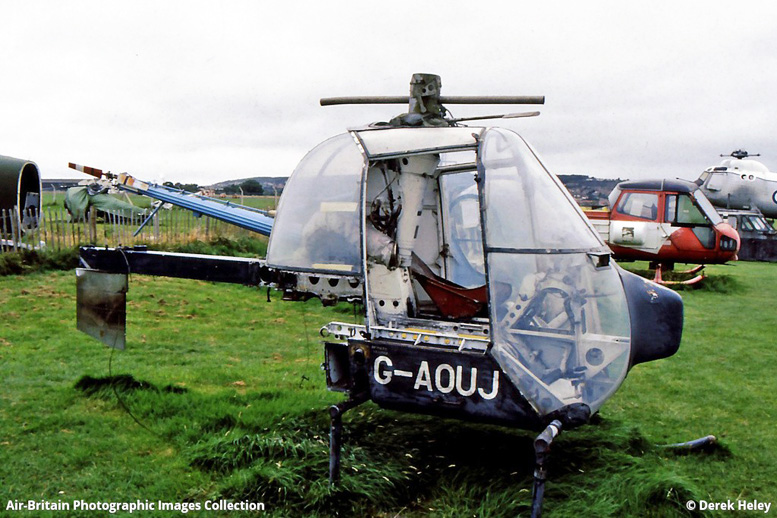 Two modified helicopters were of considerable interest. The Fairey Jet Gyrodyne re-introduced an old friend absent for several years. This is actually a test bed for the Rotodyne and has the actual rotor head and cut-down blades of that large aircraft. 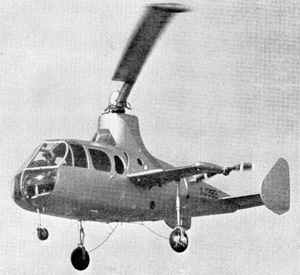 The Fairey Jet-Gyrodyne, first “convertiplane” in the world to translate from vertical to horizontal flight.

This makes the Jet Gyrodyne rather heavy and its single Alvis Leonides cannot quite sustain it with the rotor autorotating. Air for the tip-jet combustion chambers is supplied by two Rolls-Royce Griffon superchargers driven by the Leonides. In forward flight there are two airscrews at the tips of the stub wing.

The principle is, of course, to take off with tip-jet rotor drive and then to “translate” into forward flight with the rotor autorotating and using the engines to drive efficient propulsive airscrews instead of relying on the crabwise helicopter mode of progression.

This was the first public demonstration of convertiplane translation. Regretfully, one must report that tip-jet combustion is terribly noisy and the Jet Gyrodyne sounded like a leaky old steam engine laboring up a gradient.

One understands that there are hopes of noise reduction without too great a loss of efficiency, but it must be borne in mind that while the Jet Gyrodyne is only using some 500 e.h.p. of jet thrust at its blade tips the inter-city Rotodyne will be ejecting the equivalent of 6,000 h.p.

The West land Widgeon revives the name of a famous pre-war light aeroplane. It is essentially an S-51, with an Alvis Leonides engine, that has a new nose and has been given an S-55 rotor head with its attendant hydraulic servo controls. The improved aerodynamic performance arising from the change in rotor allows the fitting of the new five-seater nose.

In place of the S-51’s single pilot’s seat and rather cramped bench for three, there are in the Widgeon five separate seats arranged two and three. Dual control can be fitted and the port side of the nose fairing forms a door through which freight or stretchers can be loaded after removal of the port side seats.

Be the first to comment on "Fairey Ultra-Light Helicopter"