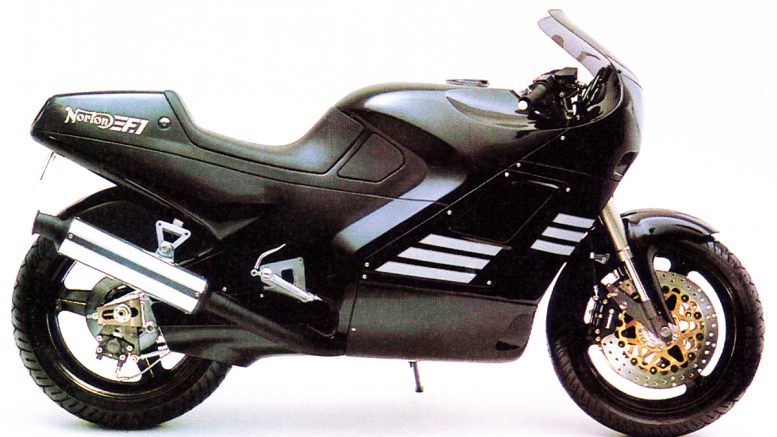 It is surprising, given their physical size and torque characteristics, that rotary motors have rarely been more than an oddity in the world of sports motorcycling – until the Norton Rotary!

European manufacturer DKW was the first to have a crack at it, with its idiosyncratic but bland Hercules of 20 years ago. It sunk without trace. The only serious attempt from the Japanese, the Suzuki RE5 first released in 197? (early), did little better.

Dubbed an overweight, underpowered, overpriced and over-complicated slug, the RE5 deserved its reputation as Suzuki’s greatest ever market flop. Yamaha subsequently shelved its rotary prototype and the Japanese bike makers have never touched them since. Once bitten, forever shy.

The famous English marque, Norton, had also began the development of its rotary motorcycle engine in the early seventies, but by this time the British factories were in financial freefall as the Japanese took their market from them. Norton Villiers Triumph, the parent company for virtually all British bikes manufactured at that time, went down the toilet. Norton resurfaced as a parts manufacturer and supplier for the old Commando twins.

To its credit, whatever meagre cash flow was derived from the parts business was invested in its rotary prototype, which eventually saw production in very limited numbers as a purpose-built police special, and later as a line of conservative sport/touring bikes. The new engine also snared a defence contract as the powerplant for air-force target drones, an unglamorous but profitable sideline which financed further rotary development.

The fruits of this research paid dividends in 1989 when Norton decided to build a one-off racing bike powered by a tuned rotary engine, and it promptly won the British Formula 1 title for that year against formidable Japanese and Italian opposition. To celebrate, Norton released an exclusive ‘FT road replica of the racing machine.

There are believed to be three Norton F1s in Australia (of only 208 manufactured), all of which have been privately imported. We found this one at the Binalong Motor Museum in south western NSW. Museum proprietor Stuart Saunders kindly lent us the bike for this report.

The Norton engine employs twin cast-iron rotors in aluminium alloy cases and displaces 588cc. The rotors, each weighing a hefty (by motorcycle standards) 3.5 kilograms, are 100 percent balanced, as is customary in rotary car applications.

The eccentric shaft on which they run is a case-hardened forged-steel single-piece item. The shaft measures 300mm in length and 5mm at the rotor journals, stepping down to 40mm at the main journals. Roller bearings in each side of the engine cases support the shaft.

There is no centre bearing between the rotors, which run on caged needle rollers. The Norton is a peripheral port design, with a single spark plug per chamber. A pair of 34mm downdraft Mikuni carburettors, mounted forward of the engine, mix the fuel.

The engine is liquid-cooled and lubrication Is total loss: oil is injected directly to the main bearings from a 2.4 litre oil tank. The gearbox (a Yamaha five-speed cluster) and primary drive (a pair of hydraulically tensioned, single row roller chains) carry their own oil supplies. The clutch is a typically-motorcycle multi-plate affair, as is the single roller chain and sprockets setup – that takes the drive to the rear wheel. 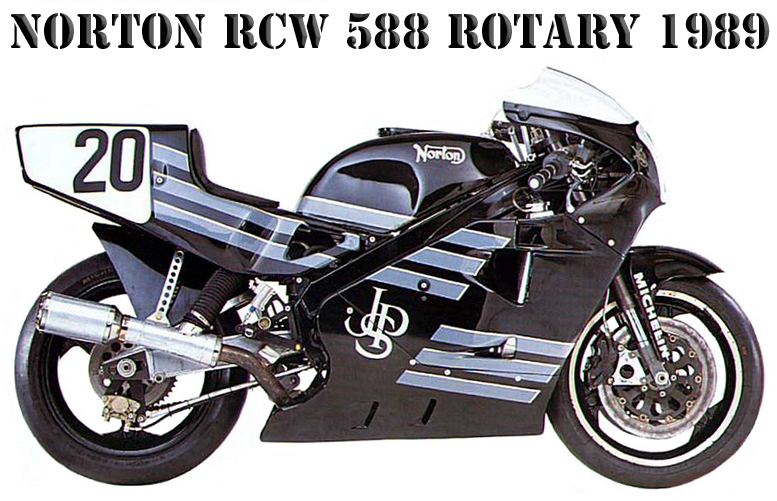 This fine running gear puts the Norton in rarefied territory and assists in justifying its high cost: around $35,000 on the road’ in Australia including compliance and registration. The bike steers and handles flawlessly, aided by its light weight and small overall dimensions, even over the goat tracks of southern NSW. We managed 200 kph out of it on a damp, poorly surfaced secondary road with no cause for alarm.

Top speed in better conditions would be up around the 225 kph mark, perhaps 230, and not bad for 588cc ‘twin’. Claimed power is 95 bhp at 9500 rpm with solid acceleration available from around 4000 rpm in racing trim, the motor has been bench-tested at up to 168 bhp at the shaft, still in 588cc displacement.

Sprint racing engines reliably produce over 140 bhp, although the relatively unsophisticated transmission, running in an oil bath sees the figure drop off to around 130 bhp at the rear wheel. Norton Motors of Litchfield, England, remains a minnow in the overall scheme of world motorcycling, and it is unlikely we will ever see many Norton rotaries on Australia’s roads.

The company’s financial outlook is still far from secure, although recent race successes may help Norton get the capital it so desperately needs. Let’s hope so. The Norton rotary proves just how well these types of engines can perform in motorcycling applications. It’d be great to see a few more.

Although it lost international homologation many years ago, the annual TT (for ‘Tourist Trophy’) Week on the Isle of Man remains Britain’s most famous motorcycling carnival. The reasons for both lie in the unique nature of the event. The TT races are held on public roads of the Isle. The course winds through the streets of the island’s major towns and through the postcard countryside with a single lap measuring an exhausting 60 kilometres.

The premier event, the Senior TT, is run over six laps at an average speed just shy of 200 kph. There are no run off areas, no sand traps, Riders, as well as spectators, are killed all to frequently, and most of today’s top motorcycle racers refuse to race there. Those that do are a special breed. Predictably perhaps, it is the Irish and the Scots who dominate, although for the past few decades almost all the winners have been riding Japanese motorcycles.

There was a time, back in the Fifties, when British motorcycles dominated the event. The famous Norton ‘Manx’, a 500 cc, single cylinder, DOHC machine carried in the then revolutionary ‘Featherbed’ chassis (revolutionary because it was amongst the first bikes to offer real suspension at both ends). The last bloke to win the Senior TT on a Manx was the revered Mike Hailwood back in 1961.

The resurgent Norton Motors entered a 588 cc rotary racer in this year’s TT events, pitching it against works-supported, 750 cc, four-cylinder Honda and Yamaha superbikes. The rider they contracted was a diminutive Scottish veteran, Steve Hislop.

The opening race was the Formula One TT, won by fellow Scot Phil McCallen on a Honda RC30. Hislop came second. Five days later, the same bikes lined up for the Senior. In a titanic struggle with Englishman Carl Fogarty, riding a factory Yamaha OWO1, Hislop set a new race record (195.2 kph) and won by just 4.6 seconds, Norton’s first Senior victory in 31 years. Fogarty snatched second and a new lap record of 198.9 kph.

Irishman Robert Dunlop brought another Norton rotary home in third. Norton boss Barry Simmons, in comparing the little rotary’s performance against the latest Japanese ‘million dollar’ factory-built fours, commented that it “wasn’t a bad effort for a bike built in a shed in Litchfield.” British bike enthusiasts around the world are still celebrating.

Norton has since announced that it will build a new bike to contest the World Superbike Championship, currently dominated by Italian Ducati eight-valve, fuel-injected twins from the Yamaha OWO1 and the Kawasaki ZXR750R 16-valve four. The WSC rules allow for twins of up to 1000cc to race against 750cc multi-cylinders. If they can take them on with a little 588, they could really put it up the Japs with a full litre. 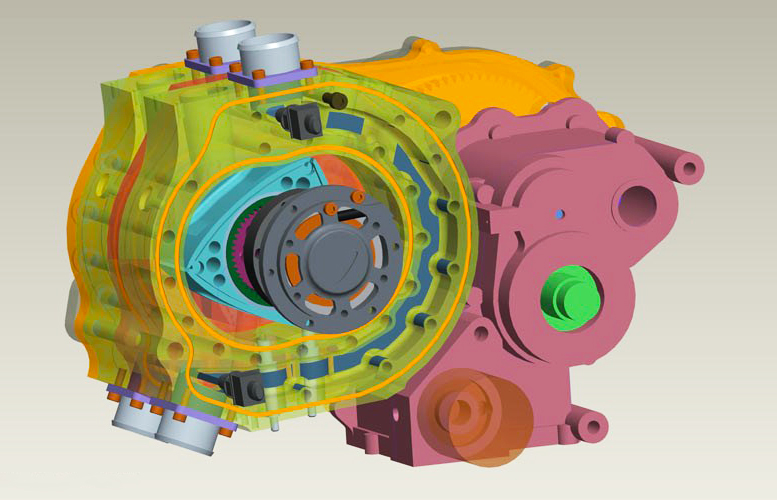 Norton is set to make a stunning return to racing next year with an all-new 200bhp+ rotary superbike.

The news – which is revealed in full in tomorrow’s MCN – means Norton could have a BSB and even WSB bike over the next three years.

The new Donington Park-based factory is currently in full flow building the limited edition Commando 961 SE roadster, and has secretly been developing an all-new rotary racer since last Autumn with eyes, initially, on the 2011 TT.

Despite being a commercial disaster 20 years ago, the old Norton regime achieved significant UK racing success in the early 1990s with a range of bikes developed, initially by Norton mechanic Brian Crighton, from a wankel-engined, police-spec Norton Interpol.

A clutch of British championships for the iconic JPS-liveried machines, rounded off by Steve Hislop’s historic victory aboard a privateer version in the 1992 Senior TT followed, before the company collapsed and fragmented.