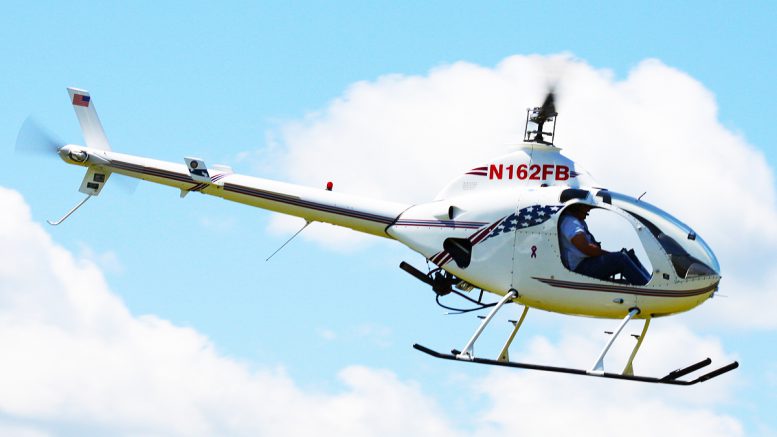 FROM the biggest kit helicopter manufacturer in the world comes the do-it-yourself kit helicopter, the Rotorway 162F powered by a four stroke helicopter engines with a flat four cylinder aircraft engine layout.

The Rotorway is not eligible for certification, so cannot be operated for revenue, but as a low-cost personal helicopter, the Rotorway makes a fine ‘entry level’ allowing the owner to gather flying hours at relatively tow cost. The 162F uses a factory-made fuel injected RI 600S, 162 cubic inch, water-cooled engine and develops 147 BHP which is more than enough to push her along at 100 mph. Top speed is 120 mph. 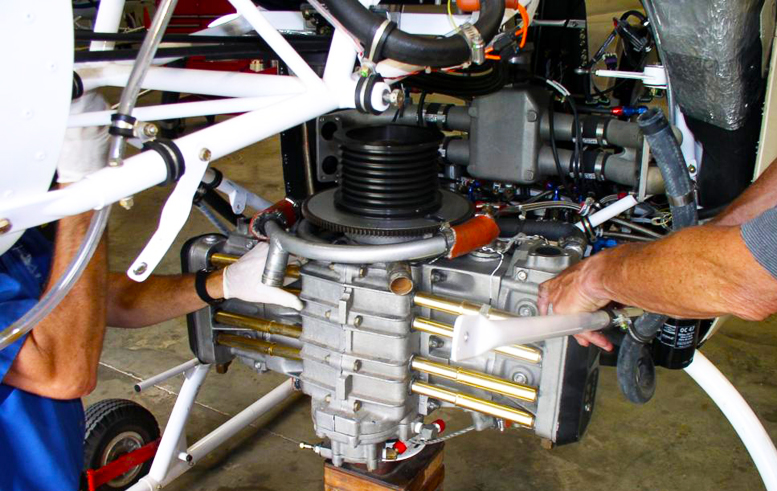 The Rotorway also boasts a version of the FADEC start system and an AGIS (Altitude Compensation Induction System) which is unique to the type and not found on other four stroke helicopter engines. The Main Rotor hub uses elastomeric bearings which provides passengers with a comfortable level of vibration even at the quoted VNE. 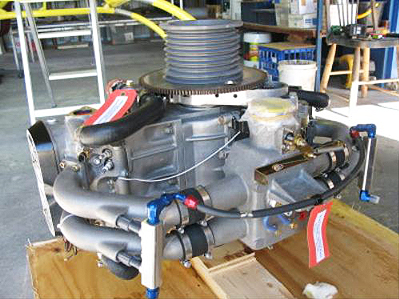 In flight and at a whisker off maximum gross weight, we recorded a 750fpm rate of climb and levelling off at 1500ft to cruising power, we reached a solid 100 mph. The PFM quotes a HOGE of 4000ft.

Interestingly enough, the engine runs on pump MOGAS which, as odd as it may seem, at today’s aviation fuel prices is a real bonus. I have to say, the self-build route is not for everyone, but by buying a completed helicopter is often financially out of reach for most. Now a anyone can be a helicopter owner and enjoying the fun of flying at a dramatically reduced cost.

Oh and by the way, the 162F model helicopter by Rotorway has been replaced by an even, better specification version, the A600 Talon, but you still have to do it yourself as a self-build helicopter. I’d put the Rotorway down as an excellent buy. 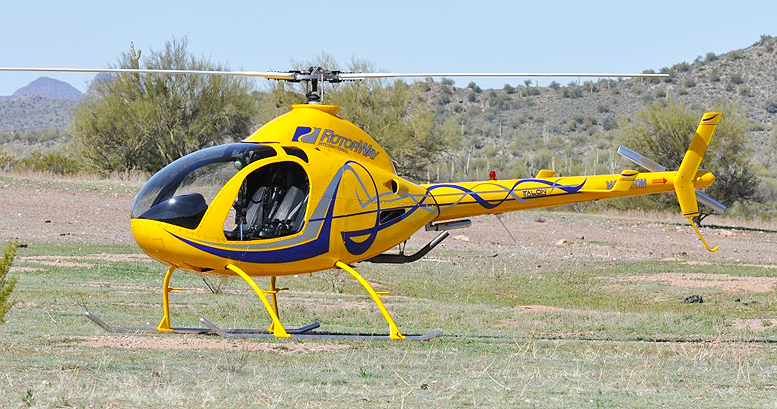 Kiwi Engineering, an New Zealand company has developed a full line of performance parts for the Subaru EA81 engine.

The first and most important new development is the performance heads which incorporate four ports—two intake and two exhaust ports that allow the engine to breath much better than a stock engine—even better than the 100 HP high output Asian version.

The heads also have provisions for two spark plugs per cylinder for that ever sought after reliability that the aircraft crowd has demanded. A performance camshaft is also available that is matched to the heads.

This combination will give the engine a real boost in performance—over 100 HP, ideal for single seat craft using four stroke helicopter engines — but Kiwi Engineering didn’t stop there. They have included custom aluminum valve covers with one set up as an oil filler and the other one with a breather. The 356 aluminum alloy valve covers also provide additional cooling capacity.

Kiwi Engineering has also developed a lightweight helical gear reduction drive with cast 356 heat treated aluminum cases. The reduction drive actually has three cases. The intermediate case can be rotated 180 degrees to allow location of the prop above or below the crankshaft centerline. The reduction gears are case hardened to 60 Rockwell C hardness. They are 11 degree helical gears which incorporate a radiused oil relief groove.

An aluminum flywheel is also supplied with a high tensile steel ring gear. A rubber cush drive is installed on the flywheel which takes care of torsional vibration Total weight of the reduction drive including flywheel and cush drive is 30 pounds. A geared starter is supplied which bumps the total weight up to around 40 pounds.

Kiwi has also developed a custom intake system and probably has a fuel injection system available by now. The performance heads and camshaft can be installed on a stock EA81 engine block without any modification. The modifications will increase power output to over 100 HP depending on what accessories are added.

For detailed information contact Rotor Flight Dynamics in Lithia, Florida who is the U.S. distributor. On the high end of the power spectrum there is a new six cylinder Subaru engine that will be available as an option for the Outback models this coming spring.

PLEASE NOTE: Kiwi Engineering is no longer in operation.

The engine is a 3.0 liter, single overhead cam powerplant that is only 0.8 inch longer than the EJ22/EJ25 and develop 212 HP at 6,000 Rpm. Fuji Heavy Industries managed to keep the length of the H6-3.0 down sufficiently to fit in the Outback engine compartment by reducing the diameter of the cylinders and replacing the HTD cog belt cam drive system with a chain drive.

The engine shares some of the features of its big brother, the 3.3 liter EG33 which was used in the Subaru SVX sports car. The intake manifold incorporates dual length intake runners to provide high torque at both low and high Rpm. The runner length is changed by a large butterfly valve that is controlled by the ECU.

The new H6-3.0 engine also incorporates computer controlled exhaust tuning in a similar manner. We don’t know if the H6-3.0 will include other features of the EG33 such as individual coils for each cylinder and dual throttle bodies, knock sensors, etc. It is more than likely that the engine will have dual throttle bodies because that is required for the particular configuration for incorporating dual intake runner length.

Since the engine is a six cylinder it was probably designed by the same group of engineers at the same location, so it very well could have all of the features of the EG33. We have observed that each engine seems to be manufactured by a different company in that there is no commonality of connectors, pin out, and manuals are organized differently.

If the new six is almost identical in size to the EJ25 it can’t weigh a lot more—maybe 30 or 40 pounds at the most. Can you imagine a 212 HP engine that weighs around 350-360 pounds all-up in a rotorcraft or aircraft? That is considerably less than a 2:1 weight to power ratio, very usable four stroke helicopter engines.

I talked to a Subaru service manager recently and he said that everyone had been asking when the new six would be available. It seems like the American driver is continually striving for more power which is to the advantage of the rotorcraft and aircraft homebuilder. 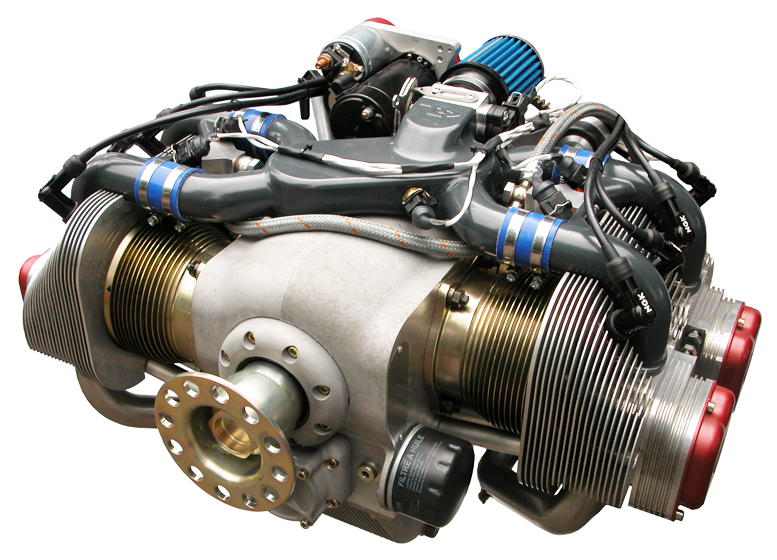 We also talked to a cam grinder recently about the possibility of boosting the EJ25 a little and we were encouraged by what we heard. It may be possible to get in excess of 180 HP out of the EJ25 with a simple cam grind, so we will have horsepower for horsepower Subaru engine substitutes for the 0-320 and 0-360 Lycoming and the Continental 0-300 and 0-470 at less weight and fuel burn.

It just keeps getting better and better with the new engines coming out. Take a look—there very well could be a Subaru in your future. 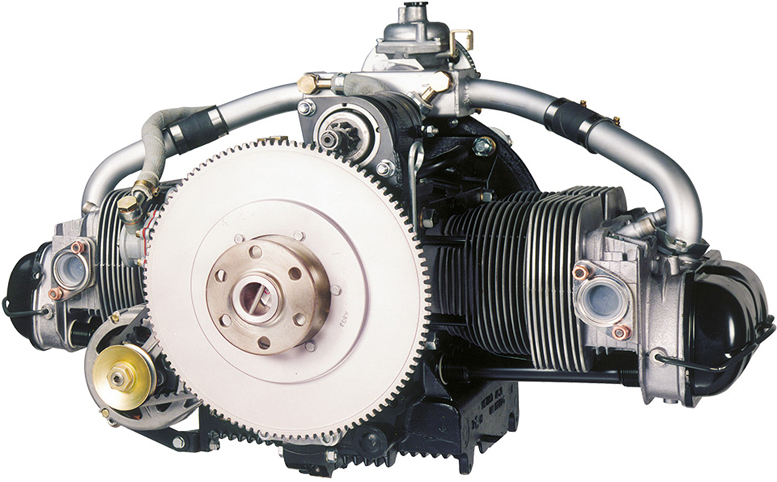 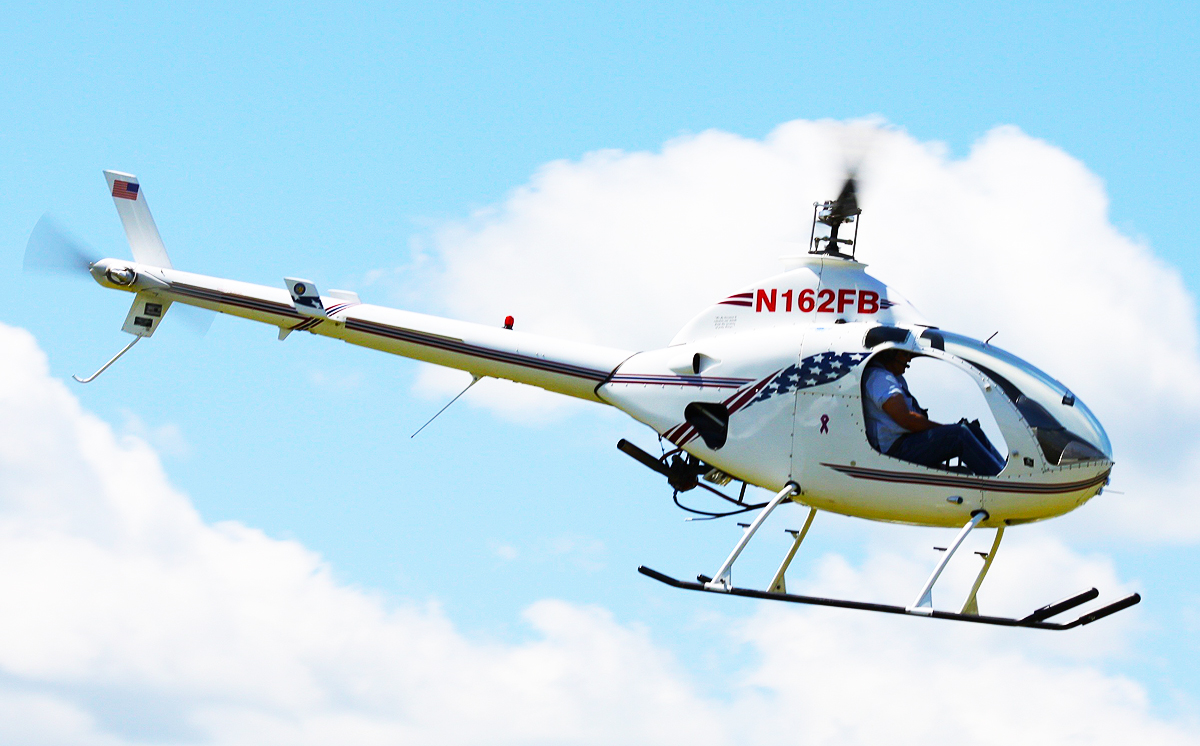 Be the first to comment on "Four Stroke Helicopter Engines"