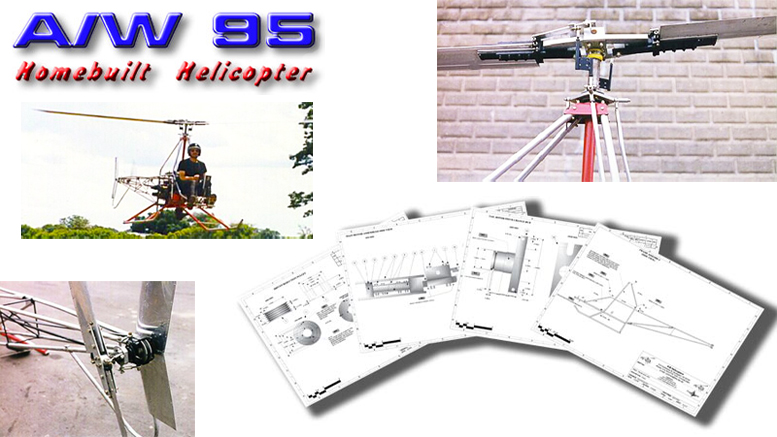 Doug Schwochert has been tinkering with helicopters for as long as I can remember. His most notable achievement is the re-birth of the Adams Wilson Choppy home built helicopter and it’s rebirth as the AW95 homebuilt helicopter.

Originally the Adams-Wilson Choppy helicopter was sold as plans and sporting a Triumph motorcycle engine, Doug took the design, re-powered it with a modern two stroke engine, simplified the construction, and released it to the public as the AW95 plans built helicopter.

Build your own rotorblades for your Experimental helicopter with these extrusions. This 3 piece blade design uses our full length leading edge extrusion with riveted an aluminum trailing edge skins. Skins are epoxied and pop riveted to the extrusion, trailing edge is epoxied and aluminum hard riveted.

$400.00 per pair (crateing included) Does not include shipping.

These rotorblades were available in 1998 from A-B HELICOPTERS, but unfortunately have disappeared from the market? Anyone know who might still have the manufacturing equipment for these??

Doug Schwochert’s AW95 homebuilt helicopter has many proven flight hours on it as seen in video footage and at fly-ins. This DIY helicopter has become a popular design for all would-be homemade helicopter builders looking for an achievable plans-built rotorcraft. 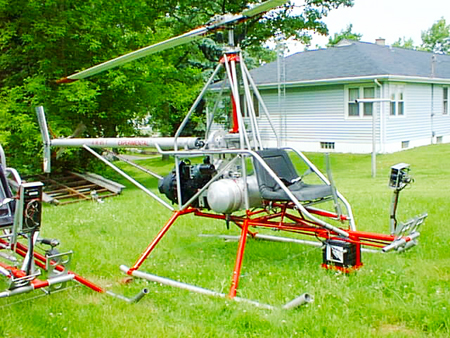 There is much footage of the AW95 flying from builders all over the world in it’s original, and modified configurations. You can also find footage of Doug test flying the turbine version of his AW95 homebuilt Helicopter – a very fine machine.

After this, Doug still had a thirst for something more, so he moved on to the Helicycle kit helicopter and became an integral part of builder operations. The following pages are a variety of article and reports over the years of Doug’s involvement with the AW95 helicopter.

Build You Own Affordable Helicopter

The main rotor is a design from A-B Helicopter Design. Its all aluminum NACA 0012. The tail rotor is preformed aluminum.

The lower air frame is welded 4130 steel tube and the upper frame and tail boom is 6061 aluminum.

Some of the helicopters modifications and up dates include:

▣ Redesigning the landing gear for ease of construction and simplicity.

▣ Redesigning the tail rotor and it’s control system for ease of construction and longer life.

▣ Redesigning the rotor grips allowing the A/W 95 helicopter to use the all aluminum A-B rotor blades for there smooth flight characteristics and affordable cost. 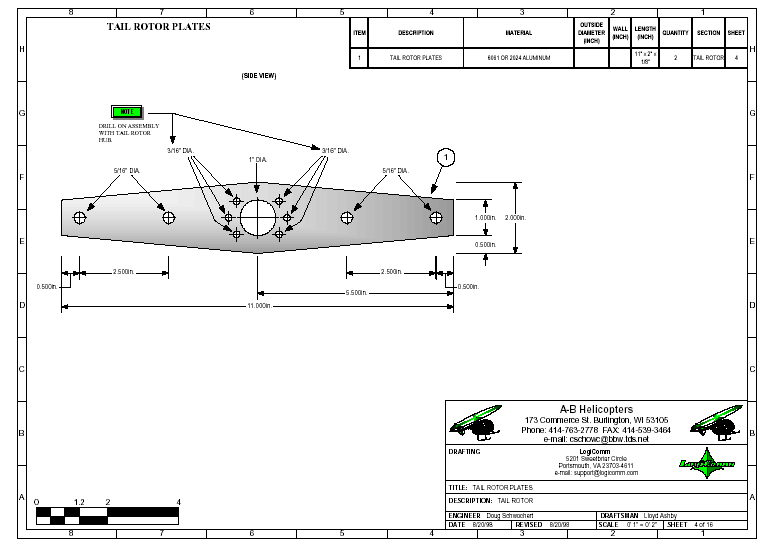 Lots of questions I know but would be appreciated if you could help my.

The blades come fully assembled and in primer ready for you to paint. They have the tip caps installed you install the root cap after you cut the blades to what ever length you want.

I have sold several sets of blades to helicopter builders but I do not know if they have the blades installed yet or not. One set went to a customer in Chicago who was flying them OK on thier helicopter.

I have 2 sets of them on my helicopters, there has been no time limit on the blades yet I do not have enough hours on my blades to set a time yet.

I don’t know of anyone else who has tried these AB helicopters extruded spar with aluminum skin blades, but I am considering them myself.

I bought a set of Vortech 7″ chord all extruded blades and they are very much tail-heavy, even with the solid leading edge filler block used for “balance”, and they are very heavy overall (2.1 lbs/ft vs. 1.6 lbs/ft for AB).

Even more weight would be needed to bring them in proper chordwise balance. – EDITOR: these were the earlier version of these blades, I know there was a version 2 of the blades, but unsure if these issues were corrected?

I haven’t tried them yet as I am still working on the aircraft, but all indications are the AB helicopter blades kit are the way to go (cheaper too).

I’ll let you know more when I’m ready to fly.