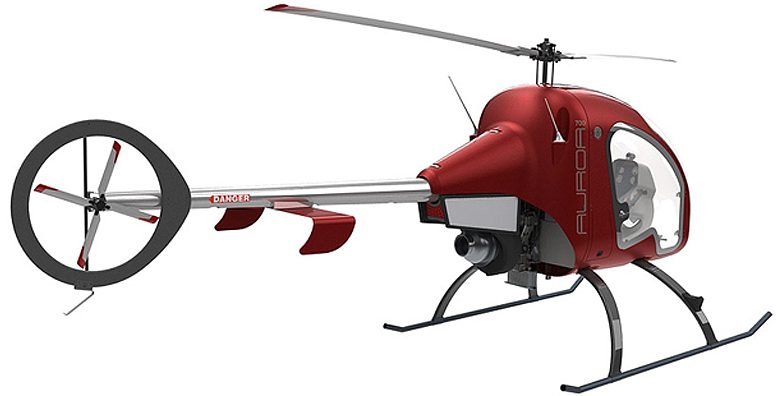 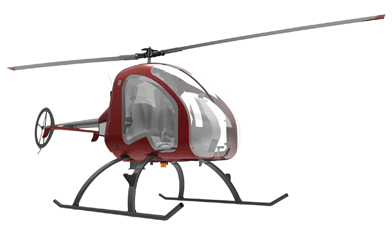 The Auroa is the brainchild of Dick Sybrandy, a machinist, turbine engine overhaul technician, and pilot in training who was unable to find a light helicopter (production or experimental) that could accommodate his six feet seven and a half inch frame.

During his search for a suitable helicopter, he discovered the two-seat Ultrasport 496 ultralight kit helicopter powered by a 100hp two-stroke piston engine (US designed and now built in Taiwan). The two stroke was underpowered for this task so a 160hp turbine was fitted.

Rather than just build a kit helicopter to meet his own needs, Mr Sybrandy saw an opportunity to launch a new composite helicopter and began a complete redesign. The result is the new Auroa helicopter.

“Our recent test flights have concentrated on the development of a new FADEC Two views of the Auroa personal helicopter engine control for the Solar T62-32 turbine that has a manual backup system,” Mr Sybrandy says.

The turbine originally used only had an electronic control with no manual override and was deemed to be inadequate by the CAA so Mr Sybrandy decided to develop a new FADEC with advanced redundancy features, such as those that are really only seen in helicopters worth millions of dollars.

The 160shp Solar turboshaft was originally built by for ground power units and used as an APU on military CH-46, CH-47 Chinook and CH-54 helicopters.

The personal helicopter engine and dynamic components are currently being flight tested on the prototype Auroa. In 2013, the flight-tested engine and components will be mated to the first all-composite Auroa airframe.

The empty weight of the Auroa is targeted at 660lb (300kg) with the maximum takeoff weight limited by regulations to 1320lb (600kg) in microlight category in New Zealand and to 1320lb (600kg) as an experimental in the US.

“Our goal is to ultimately get FAA FAR 27 certification so all elements of the Auroa helicopter are being built with that in mind. Our focus now is to complete a flying model that we can display at Oshkosh in 2013,” Mr Sybrandy says.

“The composite parts are being made in consultation with Rivers Carbon and Performance Composites who are both experienced in that field.”

“The decision to go with a turbine was easy when considering the availability and cost of Avgas around the world, the low maintenance costs of a turbine and a great power to weight ratio. The market we are targeting initially is the flight training to compete with the R22 and recreational market.”

When the full certification is reached then that opens up another larger market that includes commercial, military and police use.

Mr Sybrandy says Auroa has a steady and constant enquiry with many pilots waiting for a demonstration flight as soon as the new it is ready to go.

2 Comments on "Taranaki man designs his own personal helicopter"