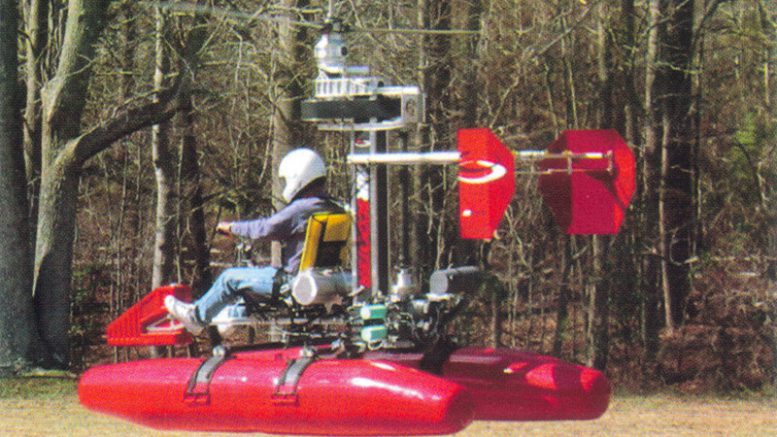 Going back to the future of rotorcraft design is the basic concept of the AirScooter VTOL (Vertical Take Off and Landing) vehicle by AirScooter Corporation of Henderson, Nevada. “The original Sikorsky rotorcraft helicopter concept was based on a coaxial design much like the AirScooter,” says Woody Norris; internationally recognized inventor and AirScooter Corporation co-founder, “What we’ve done is package the coaxial design in a modern light-weight craft that allows for intuitive control and incredible maneuverability.”

A novel motorcycle style helicopter with a purpose built vertically mounted high tech 4 stroke “AeroTwin” engine. More of a field hopper though it could possibly be an excellent addition to a luxurey motor yacht?

By eliminating the need and complexity of swashplates, collective and cyclic control through a coaxial rotor design a number of benefits beyond conventional helicopter designs are immediately realized. First; enhanced, intuitive flight controls are achieved by simple motorcycle-style handlebars and the absence of a tail rotor.

To gain altitude, simply throttle up like you would on a motorcycle, turn left or right on the handlebars for craft rotation and move the handlebar assembly as a joystick for directional control (including reverse). No pedal controls are necessary, which means someone without the use of their legs can just as easily fly the AirScooter.

Handlebar controls represent the most distinguishable feature of the AirScooter. AirScooter’s patented design also provides an amazing level of stability while in the air and during flight.

In addition to intuitive and greatly simplified flight control, perhaps the AirScooter’s greatest design feature, is that it falls into the ultralight weight class; requiring no pilot’s license. Weight has long been the greatest obstacle to a successful ultralight coaxial design and AirScooter has overcome this obstacle by using superior design elements and space-age composite materials.

This coupled with the revolutionary AeroTwin 4-stroke engine allows the craft to meet the requirements of Ultralight FAR Part 103. With limited practice, a recreational pilot can quickly become confident with the controls and perform basic flight maneuvers. Video clips of the AirScooter in flight can be viewed on-line at www.airscooter.com (discontinued).

Built around a strong composite torque-box airframe, the overall height of the AirScooter is 11 feet with a width of 7 feet and a length of 12.5 feet (does not include rotor blade length). The 14 foot diameter rotors have extruded aluminum blades. Flight speed is estimated to range from hover up to 55 knots carrying approximately 350 total pounds of useful load while utilizing a 5 gallon fuel tank providing approximately two hours of flight time.

Standard instrumentation includes digital readouts for fuel level, altitude and air speed conveniently located between the grips of the handlebar controls. These performance specifications are engineering estimates that are corresponding well with final phase engine testing that is currently taking place.

The innovative international patent-pending AeroTwin engine is the result of a “gap” in the ultralight engine market that was discovered as AirScooter Corporation searched for a light 4-stroke engine in the 50-75 horsepower range to power the AirScooter craft.

Pearson designed and engineered an ultralight-weight 4-stroke engine specifically for AirScooter. After over two years of intense design and testing; the AeroTwin engine can easily produce 65 horsepower at 4,200 RPM and weighs in at less than 90 pounds dry (includes cooling shroud, exhaust and oil reservoir).

Beyond filling the gap in the market, the 4-stroke AeroTwin engine delivers the safety advantages and lower noise of a 4-stroke engine compared to the popular 2-stroke engines used for most ultralight craft. Additional features that are unique to the AeroTwin engine include: an internal air cooling oil scavenging turbo charging system, reversible cylinder heads (swap sides for inlet and exhaust), the hollow head studs serve as oil passageways to cam boxes.

Also the engine can run both vertical and horizontal, an EMS (Engine Management System) is incorporated into the inside lid of the plenum chamber to reduce loom size and provide cooling, the cylinder barrels are cast into the head as one piece, the combustion chamber is entirely ceramic coated, the hollow cam shafts reduce weight, the bore/stroke relationship is structured to reduce secondary imbalance without the need for balancing shafts and the output drive is available from both ends of the engine.

The AeroTwin engine will also be marketed for additional uses to include fixed-wing aircraft, other ultralight and kit aircraft, portable electric power generation and pumping and more. For more detailed information on the AeroTwin engine visit www.aerotwinmotors.com (discontinued).

Unlike most recreational aircraft, the AirScooter is not a kit. The AirScooter will come completely assembled except for installation of the rotor blades and will include the added feature of extremely durable pneumatic floats instead of traditional helicopter skids. This feature further adds to the versatility of the AirScooter to get you wherever you want to go on land or swamp while providing a softer landing. 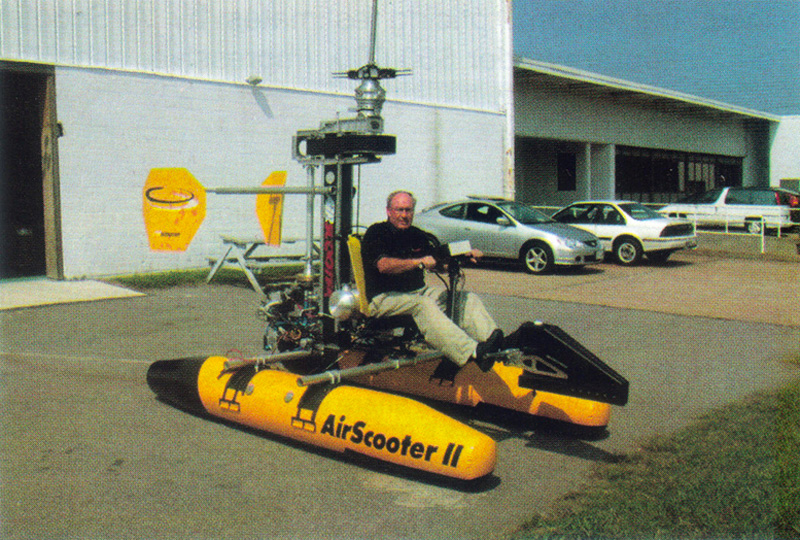 The sky is the limit, literally. The AirScooter is not designed or marketed to just be the “next thing” for recreational hobbyists. “Traditional recreational vehicles like ATV’s and jet-skis are fun, but limited in use,” says Dwaine Barnes, President of AirScooter Corporation, “the AirScooter will provide a simple way for man to achieve the excitement and versatility of flight for recreational and professional use that’s beyond any other product on the market.”

Mr. Barnes also adds that the pre-production interest level generated from the AirScooter web site is amazingly diverse. From military surveillance and mail delivery on military aircraft carriers to police agency and border patrol surveillance applications, the AirScooter’s unique design and moderate cost has generated a buzz in a number of industries other than the obvious markets of recreational hobby, hunting and ranching.

Adding to the long list of possible applications are future AirScooter design plans for an unmanned application, a two-passenger model that is currently in the design phase and possibly a 100 horsepower 3-cylinder motor. Both the AirScooter and AeroTwin engine have multiple patents pending and the AirScooter was already featured by Popular Science magazine as the “Beat of What’s New Aviation and Space Products of me Year for 2002”.

For those of us ready to get in the air, the wait shouldn’t be much longer. The AirScooter is currently in the final phase of testing with the new AeroTwin engine and is expected to be available in 2004. The price tag for this incredible machine is yet to be determined, but current pricing estimates by AirScooter Corporation are under $50,000. Impressive, especially when compared to the price of most land-bound vehicles or small helicopters.

Even more impressive when considering the substantial savings from having an aircraft engine that operates on gasoline instead of expensive aircraft fuel and the fact that just the licensing required to operate a conventional personal helicopter could cost about $50,000 alone!

In addition, repair and maintenance costs are greatly reduced due to the smaller number of parts required for the simplified design and lack of collective and cyclic components. For instance, due to the unique vertical mounting capability of the AeroTwin engine, the need for any mechanical drivetrain elements to make the traditional 90 degree turn to route power to the rotors is eliminated … along with the weight and cost of these elements.

AirScooter Corporation has succeeded in developing a stable and affordable ultralight helicopter that uniquely combines the original helicopter coaxial concept of the past with the advanced materials and space-age engineering of the future. Sometimes the key to the future is found in the past. In this case the key was buried in a long line of failed attempts at coaxial flight. AirScooter Corporation, with this technological success, is looking back to the future of recreational flight and they love the view.

Meet the designer and learn more about the AirScooter: http://www.woodynorris.com/