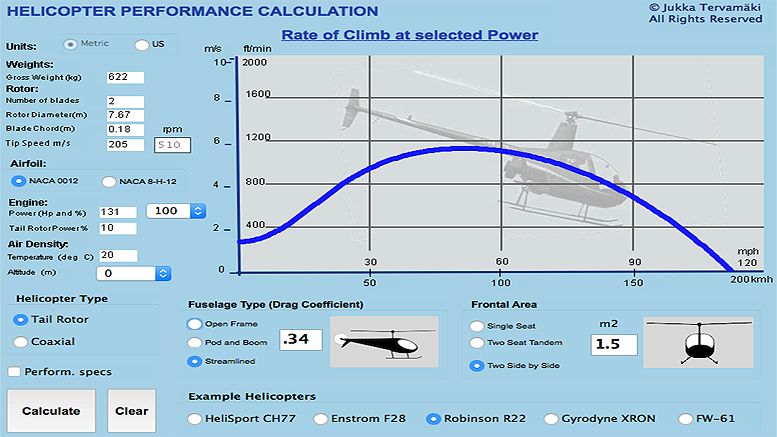 How much horsepower do you need to lift your homebuilt helicopter?

Approximately 12 pounds (maximum) gross weight per horsepower (at the rotor).

How much horsepower is required per square foot of main rotor disc area?

Approximately 4.5 to 5 square feet of rotor disc area per horsepower.

What length main rotor blades do you need to life your homebuilt helicopter?

Below, we will demonstrate a method to calculate the theoretical thrust that that a propeller or rotor can generate. Of course in a helicopter, the rotor disk is oriented such that we call its force “lift” rather than thrust, “thrust” would be used in the case of an airplane. On a helicopter, the force of a tail rotor would be best described as thrust.

The first step is to measure the diameter of the rotor or propeller and calculate the area in square feet. Area is defined as:

If we know the area of the disk in square feet, we then need to know the amount of power that is delivered to the rotor. This needs to be in the units of horsepower. To convert the metric system of units Watts to horsepower, use the conversion: 1 horsepower = 745.699872 Watts. The goal is to calculate a parameter called “power loading” in units of horsepower per square foot. Power loading is calculated by:

Where “power” is the power delivered to the rotor or propeller and A is the area, calculated above. This is very important—approximately 10 to 15 % of the engine’s power will be delivered to the tail rotor to counteract torque. This number obvisouly varies but 10 to 15 percent is a good starting point. If you have a 100 horsepower engine in your helicopter, expect only 85 to 90 horsepower to actually get to the main rotor.

Additionally, you would need to reduce the power by an additional small percentage to account for frictional losses in the drive system. In the case of a tandem rotor helicopter such as the Chinook or meshed rotor like the Kmax, all of the power will be delivered to the main rotor and this in fact is the reason those helicopters are so well suited for heavy load lifting operations.

Now that thrust loading is calculated, we can find the total thrust of the propeller (or lift of the rotor).

Below are some common examples of the thrust developed by common aircraft engines and typical helicopters:

Using equation one, we calculate power loading (PL) of a 6 foot diameter (72″) disk with 300hp absorbed.

Using equation two, we calculate the thrust loading. Typical communication/interpretation error is in the negative exponent of the equation. Remember, X^(-Y) is the same as 1/(X^Y).

When determining whether a helicopter is properly loaded, two questions must be answered:

To answer the first question, just add the weight of the items comprising the useful load (pilot, passengers, fuel, oil (if applicable) cargo, and baggage) to the basic empty weight of the helicopter. Ensure that the total weight does not exceed the maximum allowable gross weight.

To answer the second question, use CG or moment information from loading charts, tables, or graphs in the RFM. Then using one of the methods described below, calculate the loaded moment and/or loaded CG and verify that it falls within the allowable CG range shown in the RFM.

It is important to note that any weight and balance computation is only as accurate as the information provided. Therefore, ask passengers what they weigh and add a few pounds to account for the additional weight of clothing, especially during the winter months.

Baggage should be weighed on a scale, if practical. If a scale is not available, compute personal loading values according to each individual estimate. Figure 6-2 indicates the standard weights for specific operating fluids. The following terms are used when computing a helicopter’s balance. 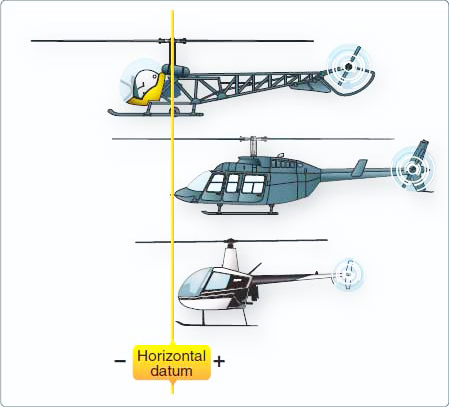 Balance is determined by the location of the CG, which is usually described as a given number of inches from the reference datum.

The horizontal reference datum is an imaginary vertical plane or point, arbitrarily fixed somewhere along the longitudinal axis of the helicopter, from which all horizontal distances are measured for weight and balance purposes. 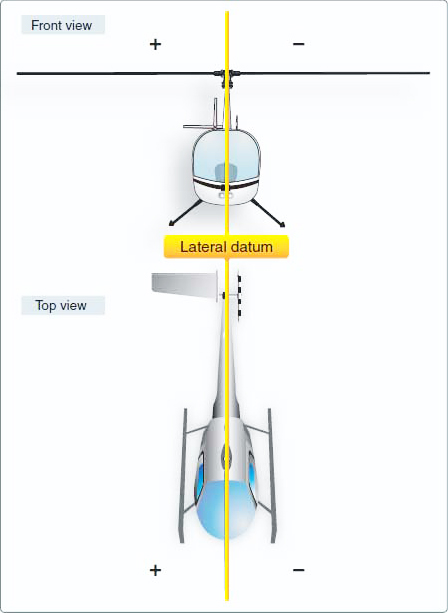 Figure 6-3. While the horizontal reference datum can be anywhere the manufacturer chooses, some manufacturers choose the datum line at or ahead of the most forward structural point on the helicopter, in which case all moments are positive.

Figure 6-4. The lateral reference datum is located longitudinally through the center of the helicopter; therefore, there are positive and negative values.