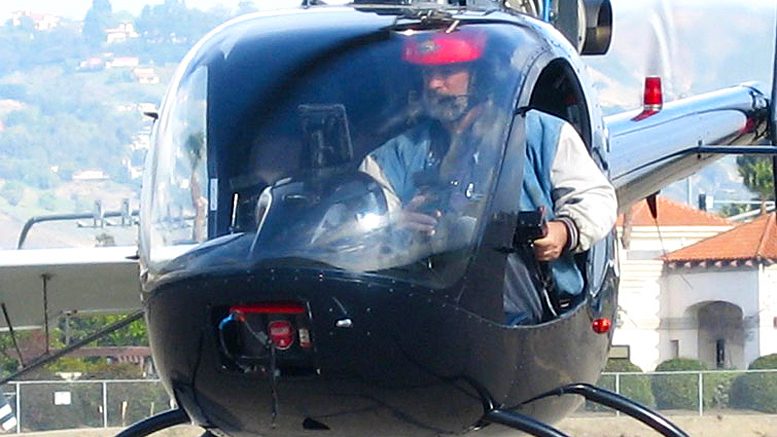 Hillberg Helicopters is an American aircraft manufacturer based in Fountain Valley, California and founded in 1990 by Donald Gene Hillberg to provide maintenance and modification services to local helicopter operators.

The Hillberg Helicopter Company also specialized in the design and manufacture of experimental helicopters in the form of homebuilt helicopter kits and helicopter plans for amateur construction.

The Hillberg EH1-01 RotorMouse is a single-seat turbine powered helicopter with stub-wings that Don designed, built, flew and offered as plans. At least one example has flown racking up many flight hours. It even featured in a movie titled “Hanger Rats”.

The company offered a turbine conversion kit for the Rotorway Exec, using a Solar T-62 auxiliary power unit engine to create the Hillberg Turbine Exec with many now flying. Don Hillberg designed the turbine version of the Rotorway Exec. Walt & Dave Domanske saw Don’s RoterMouse helicopter at an air show and asked if a turbine power plant would work in a Rotorway Exec.

Don drew a quick drawing on a paper napkin, and explained what was needed to start the project. With a little work Dave and Walt made it work and installed it on Walters Rotorway and with Don Hillberg’s help, a Rotorway Exec retrofit kit was put into service creating the JetExec.

Hillberg also produced a number of other experimental helicopters including the EH1-02 TandemMouse, two-seats-in-tandem version of the RotorMouse designed as a 50% Cobra Attack Helicopter, the CombatMouse, SkyShark and also developed the four-seat EH 1-04 Baby Huey, which awaits funding for production.

Some of this information is outdated and supplied as an overview for educational, research and reference purposes only. It is based on a collection from aviation statistics sites and forums on the internet. Don is still an active member on some of these forums. Further clarification may be required. 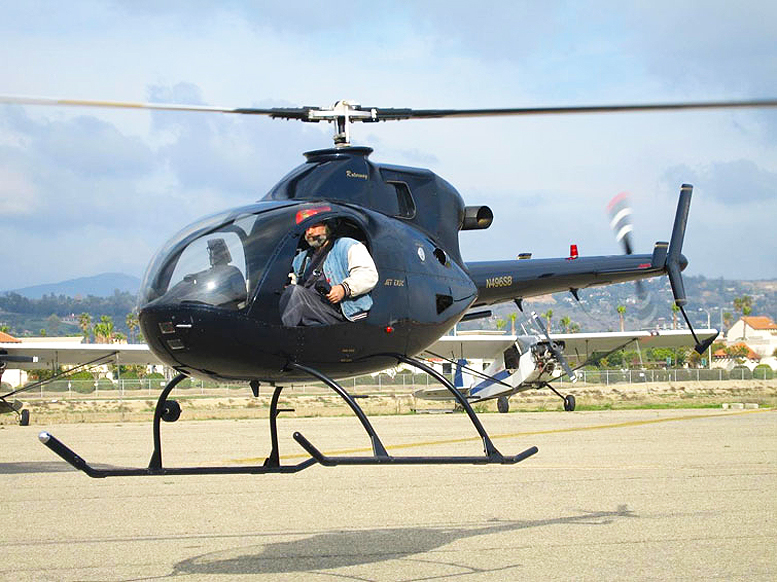 Extract from a letter corresponding with Don

…My opinion on water cooled engines in, not in a helicopter. The weight is not good and when in a tight situation you will pull up on the collective and the RPM drops. You have more leeway in a fixed wind aircraft, but add 3 gallons of water @ 8lbs per gal, plus hoses, water pump, thermostat, purge tank and cap, radiator, mounts, fan, baffling – and it becomes too much weight for not enough power (generally speaking).

My philosophy is the K.I.S.S. principle – Keep It Simple. A standard horizontal orientated crank shaft, a normal position for most engines, no special lubrication required, air cooled, no radiator, and off the shelf engine parts…

Below are some drawings Don provided me to get the thought process working – a little “inspiration”. The first is a very simple design though sticking to a well proven layout with some improvised parts and a welded 4130 chromoly airframe. The right angle gearbox is the shaft-drive unit from a Honda Goldwing motorcycle – quite commonly found on eBay (USA).

This helicopter design is set-up with a 3 V-Belt clutchable pulley system driving a set of unknown main rotor blades. The engine appears to be an air-cooled two stroke, most likely a Rotax or Hirth. Overall a neat little set-up, in fact the MC1 helicopter seen elsewhere on this site bares a very close resemblance to this design. As it turns out, I remember hearing somewhere that Don may in fact have suggested this layout to the MC1 designer himself! 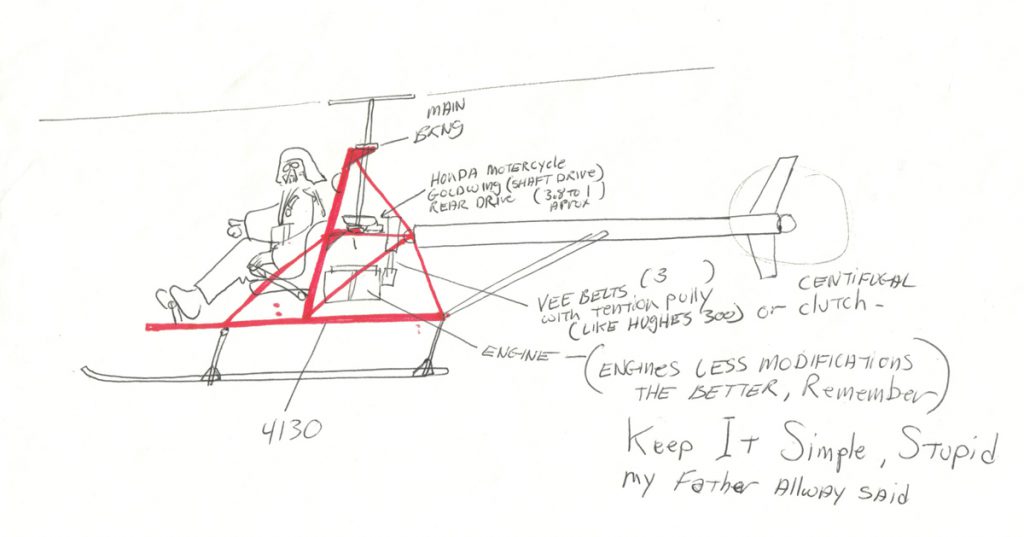 The second drawing Don provided looks to be one of his special “babies” that he’d started to build but never finished. He aptly named it the “Hillberg Ultalite Helicopter” – based on a Rotax air-cooled two-stroke two cylinder engine fitted to a riveted aluminum airframe.

Everything is simplified including a gravity fed fuel system, Honda Goldwing 90 ° gearbox (shaft drive unit) with a simple belt drive with sprag clutch from the Rotax engine. The gusseted and riveted aluminum airframe is quoted as weighing just 45lbs, certainly placing it in the very-light arena. 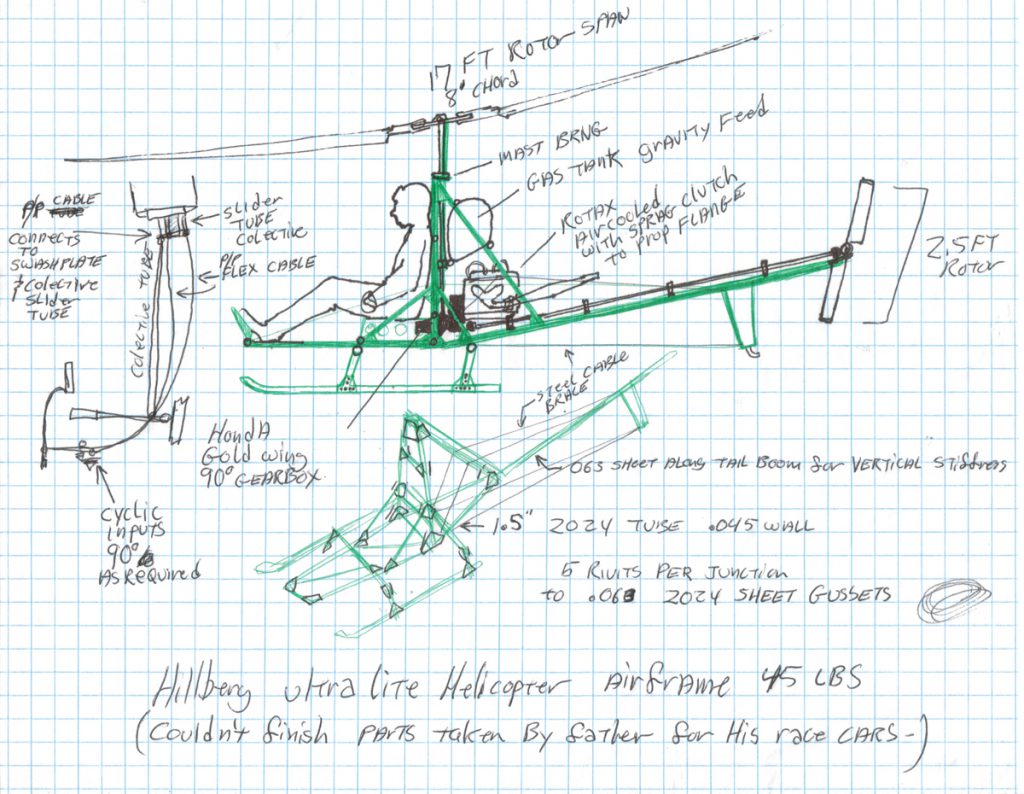 Don shares his talents with his own design of a home made – DIY helicopter rotor blade machining jig. The design presented is intended to mimic the blades from the Gyrodyne craft which Don uses on most of his designs with excellent results, great efficiency and high speeds. You could either do as Don has shown and machine completely out of wood, or use the jig to create foam or composite blanks of your own composition. 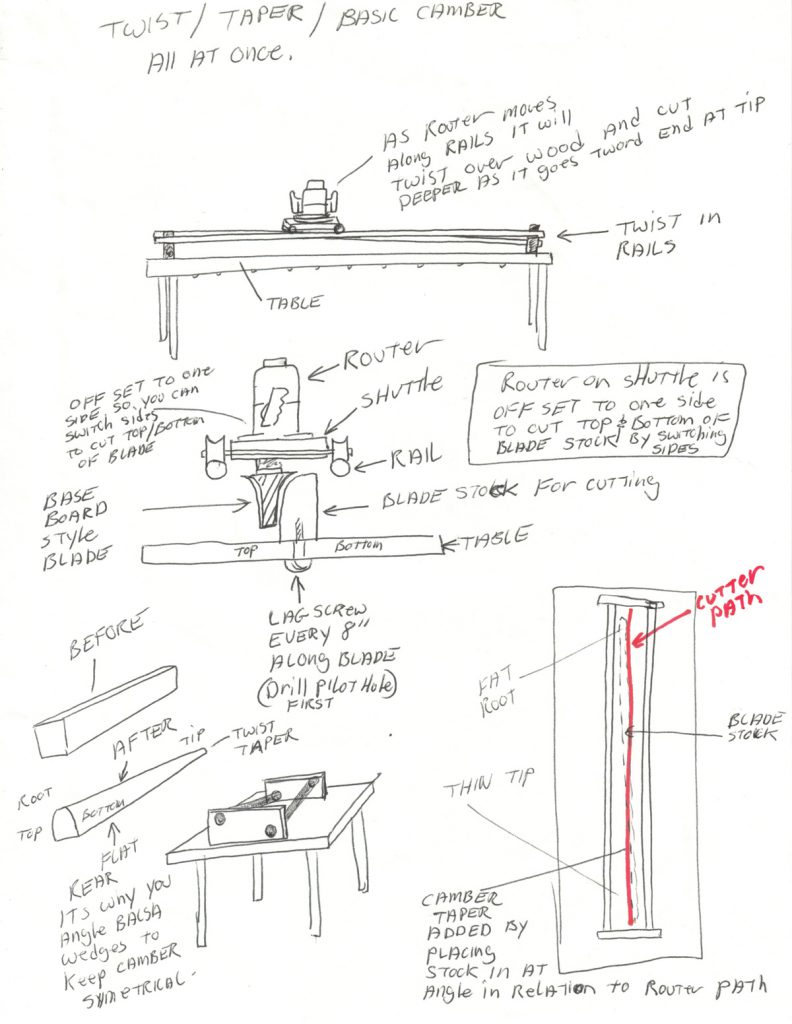 The blades balance weight is shaped lead pieces glued and nailed to the leading edge, each piece is from 1 inch to 6 inches in length along the front of the blade. 4130 bar stock can be used but more would have to be used though lead to me would work OK. The chord weight is used to balance the blade. During construction you can reduce or add weight as needed to achieve the correct balance.

The blade weight will run from 2 feet from the root end of the blade, to about the last bit of blade tip with each blade weighing 37lbs. This results in a set of two blades weighing seventy four pounds – (74lbs) for the Gyrodyne “wooden” blades. The QH50 fiberglass blades by contrast only weigh eleven pounds (11lbs) each! 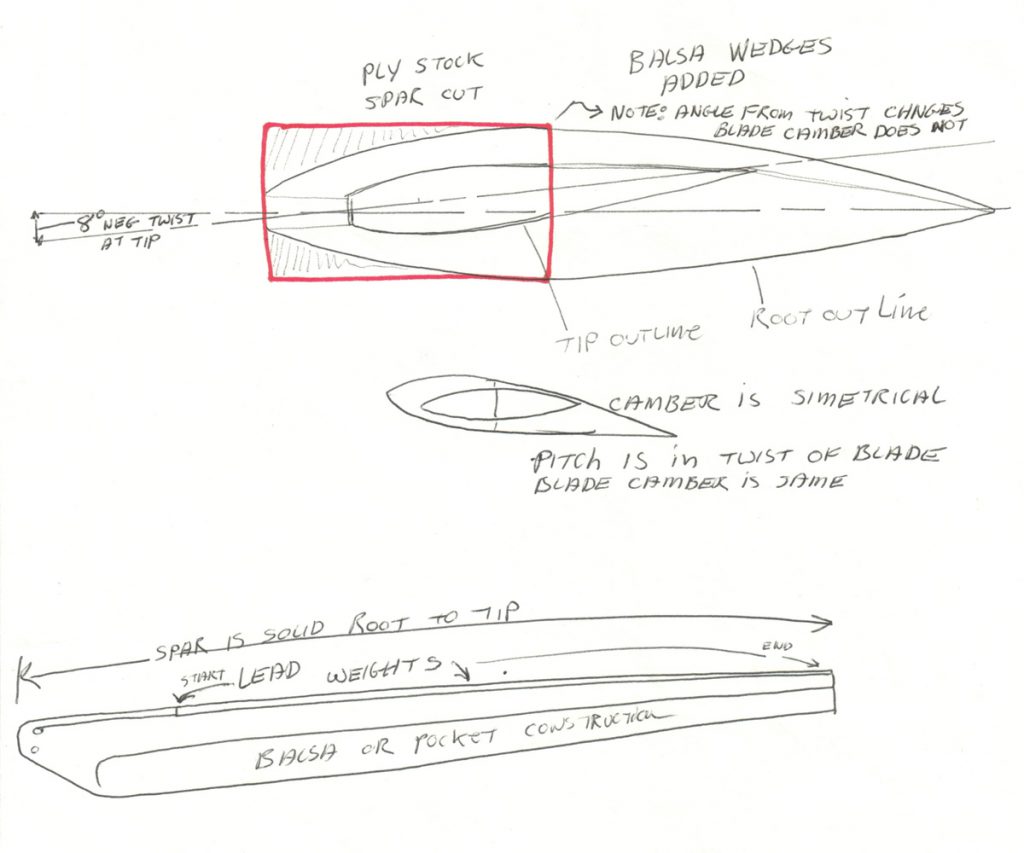 If you make a table with two rails to hold a roller shuttle holding an electric router – by securing the blade stock and moving the routeralong the rails you can cut out a symmetrical blade with camber and twist. The cutting should be modified with a little experimentation on scrap 4×4’s or 2×4’s. The inspiration for this design comes from a prop carving machine I once saw.

With a little practice, making your own helicopter rotor blades should be relatively easy because your design is only as hard as you make it, remember the K.I.S.S. principle and homebuilt helicopter construction will become a reality. 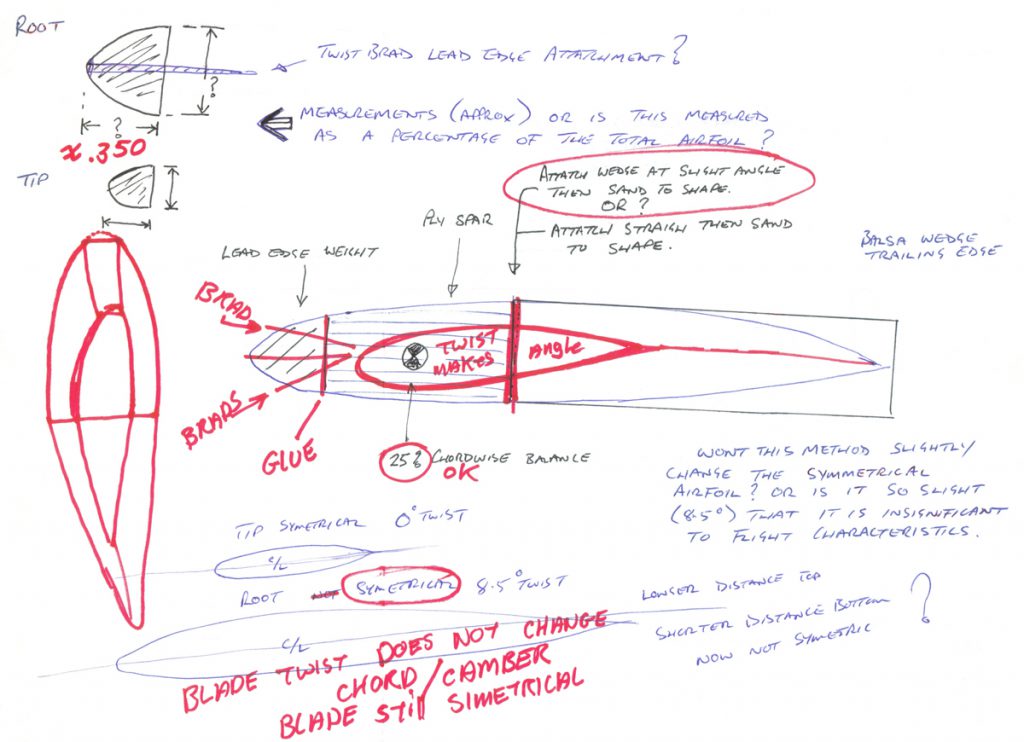 …I have included some sketches that show a cutting rig to cut the stock pieces into a chambered spar. You can even use 1/16th sheet ply to cover the spar and balsa blocks with some glass cloth for a skin to seal it. 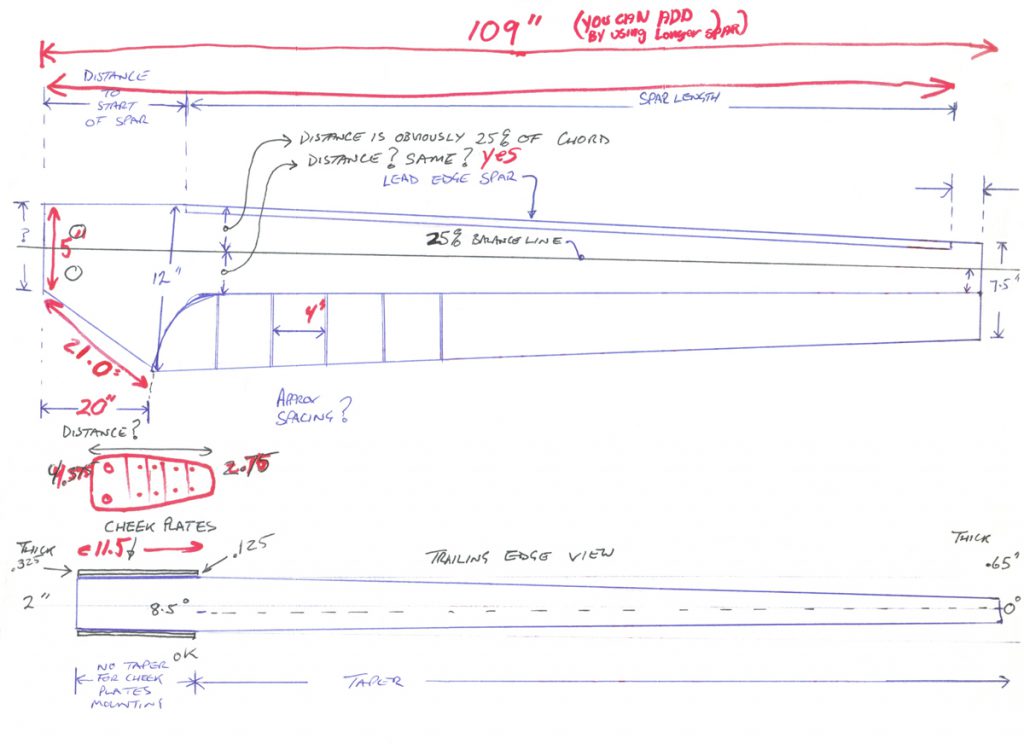 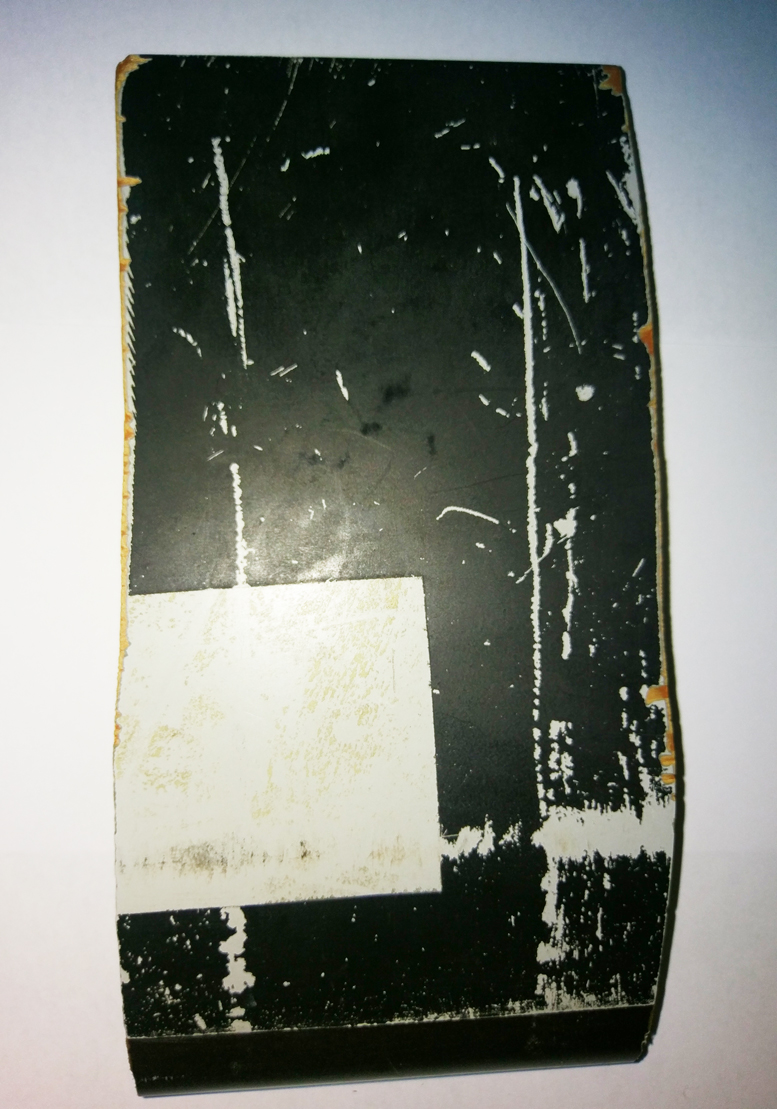 ABOVE: The rotorblades presented above were graciously sent to myself from Don Hillberg some years ago. I was researching how to make my own homebuilt helicopter rotorblades due to a lack of availability locally and internationally.

At that time, Don had recently experienced a minor “mis-hap” with his RotorMouse plans built turbine helicopter experiencing vortex-ring rotor state. The result was a set of wiped out wooden Rotordyne helicopter blades which he cut and sent to me so that I had a better understanding of how these blades could be made. 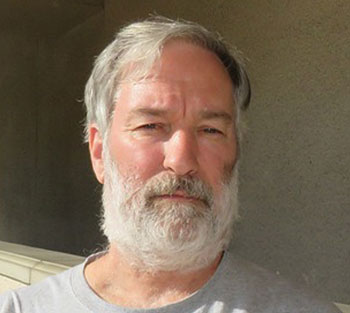