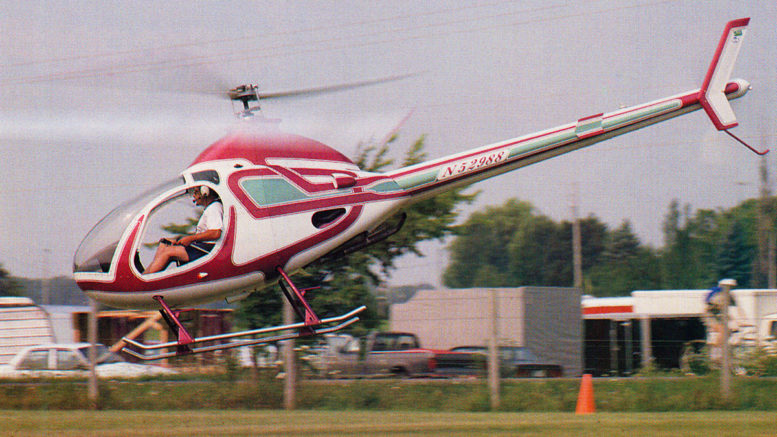 Oshkosh Brings Out The Rotorcraft

If you wanted to make some real money at the show, the business to start would be an aeronautical version of weight watchers. Though change is the biggest given from year to year at the ultralight section, one constant is the difficulty manufacturers have had in trimming down their designs to be Part 103 legal.

The problem seems to be that it’s just very hard to make the kind of substantial machine the people want and stay under the 254 lb. legal limit. Of those who make it, many report to us that even their factory-built machines are fat.

The problem seems to be that actually getting down to legal weight requires more restraint than most companies are willing to expend on their demonstrators. After all, leave off the paint, instruments, and go with the smallest engine possible and see how many airplanes you sell.

It probably won’t be many. There were a few companies at the show which succeeded in making weight with their one-place ships. Titan, which debuted their Titan 103 at Lakeland earlier this year, again showed up with their award winning ultralight.

In this case, the company pared down by substituting fabric for metal where they could and keeping luxuries to an absolute minimum. The good news is that the famous Titan wing, though lightened considerably for ultralight duties, is still constructed mostly of metal for strength and durability.

Powered chutes were big at Oshkosh this year, probably because they’re so cheap, so easy to fly and so forgiving of mistakes.

The Titan 103 demonstrator, which we’re told barely makes weight, is finished in a single coat of silver paint. It isn’t nearly as pretty as the factory two-seat demonstrator with its luscious paint job. The 103 did have one very nice feature, though, a digital multi-display,which is distributed by Titan Aircraft.

With a bright, high quality display and accurate probes, this product can actually save you money over what you’d pay for the individual instruments were you to buy them yourself. Keuthan Aircraft was also playing the weight game with their new Buccaneer UL, a two-place ship designed for flight instruction.

Though it goes over the allowable UL trainer weight limit by itself, with a 50 lb allowance for floats, it squeaks in just under. That’s good news for Keuthan, as the Buc II UL will be the only game in town and the UL float training market will be all theirs. 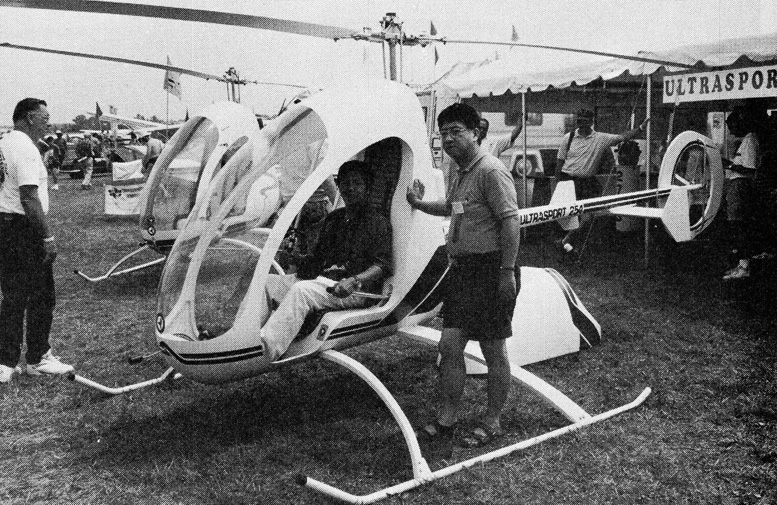 The sleek-looking Ultrasport ultralight helicopter was getting rave reviews from fans at this year’s convention.

As always, TEAM Aircraft was at the show, again demonstrating their new vigor with true ultralight flight. Most prominent in their display at the ultralight section were their Max 103, an ultralight version of the famous mini-Max. First introduced at Sun ‘n Fun two years ago, the Max 103 makes the pleasure of TEAM play totally ultralight legal.

But perhaps the biggest news of the show was TEAM’S latest entry in the ultralight wars, an open steel-tubing fuselage single-seater called the Air-Bike (look elsewhere in this issue for an in-depth look at this new model).

TEAM had two Air-Bikes at the show, the original factory demonstrator and a new blue one with a lowered thrust line for improved visibility and other refinements. Every year at Oshkosh I place a playful wager on which companies won’t be back the following year.

Every year there are several new firms renting space at the ultralight section and you know that many, if not most, of them won’t survive to see the light of the following year. There’s an old joke about the ultralight manufacturer who won 10 million dollars in the lottery.

Crowds at the ultralight section were epic. As was the case at every site on the field, it was obvious that this Oshkosh was unlike any previous convention.

On the rotorcraft side of the aisle, things were very interesting, even more so than usual. As we’ve come to expect, Rotorway dominated the rotorcraft action at the strip with several outstanding examples flying daily.

With sleek, great flying designs that win award after award, get built in short order by their customers, there’s no doubt about who’s number one in this segment of the industry. There were other good looking craft at the show, however.

One which caught our eye was the comely little Ellisport ultralight helicopter. Manufactured in Italy, we wouldn’t be surprised to see this little ship catch on with people looking for an inexpensive single-place true helicopter. 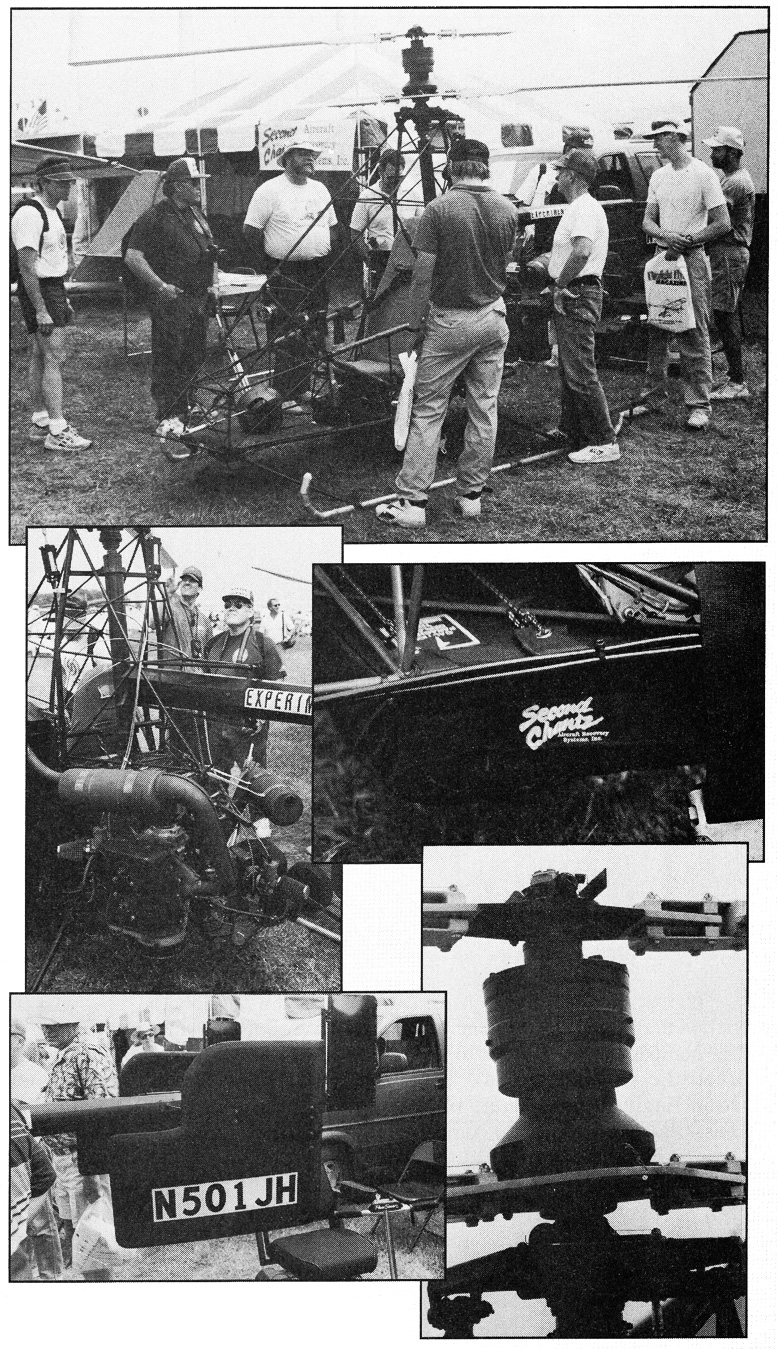 One of the most interesting, if not the most polished, new products at the ultralight section was the Nolan 51-J coaxial Pendulum helicopter. This twin-engine (b), twin-counter-rotating blade (c) aircraft can do anything any regular helicopter can do, and then some. Having no tail rotor, the 51-HJ instead utilizes twin-rudders (d) to harness the blades’ thrust for yaw control. The helicopter put on several impressive demonstrations at the ultralight strip during the week. Note the Second Chantz emergency recovery chute stored below the seating cage.

Believe it or not, this homebuilt helicopter features twin-engines, twin-counter-rotating blades and requires no tail rotor. Instead, the copter is outfitted with two large rudders which channel the down-wash from the main blades to yaw the aircraft in the desired direction.

It’s an ingenious solution. And the thing flies good, too, as shown during several impressive demonstrations at the ultralight strip. It hovers and turns at low level without a hitch, and it flies fast just as well. This is one product worth keeping your eye on.

No, it’s not an aerial assault vehicle, but the pilot of this serious-looking Air Command two-seat gyroplane looks as though he’s ready for anything!

NITRIDING – WHAT IS IT?

Here is an oft-asked question This article is reprinted from the AVCO LYCOMING FLYER published by Avco Lycoming Division, Williamsport, PA.- Lycoming Engineering, in their continuing effort to improve our engines, developed a better method of manufacturing hardened alloy steel cylinder barrels thirteen years ago by means of a method known as nitriding.

The process requires special heat treating furnaces which are air tight and capable of holding the parts at a high temperature. At this heat level (975°F), the ammonia gas flowing into the furnace is broken down into its elements of hydrogen and nitrogen; this is the source of the nitrogen which penetrates the surfaces of the steel.

In order to produce a satisfactory nitrided surface, the process must be operated for an extended period of time, generally from 25 to 80 hours. Along with the cylinder barrels, Lycoming nitrides all crankshafts and some gears.

The nitriding process applied to cylinder barrels has been thoroughly service tested in military as well as commercial service. After having been FAA type tested, we began production of engines using nitrided cylinders in 1960. The service record of these cylinders has been excellent.

In fact, our Management was so impressed with the favorable service record of the nitrided cylinder that they changed from chrome to nitrided cylinders in all our higher powered and supercharged engines.

Some favorable characteristics of nitrided barrels are as follows:

These new features in the powerplants have meant even longer operating life than standard steel barrels, and they mean dependability and economy.

The identification for chrome plated cylinders has been the orange band around the cylinder base, or the equivalent color on the edges of the top cylinder head fins between the two valve push rod shroud tubes. The color coding for the nitrided cylinders is azure blue and will appear in either of the two locations indicated above.

The band around the cylinder base is used when cylinders are painted black as a separate operation prior to engine assembly. The color coding on the top edges of the cylinder head fins has been used on engines painted all gray after assembly.

From the service standpoint on nitrided cylinders, there are three methods of handling a full time engine at overhaul:

Either method provides a satisfactory hard wearing surface. Engines with chrome or nitride hardened barrels have a good wear characteristic, and are more rugged than standard steel barrels. In spite of hardened barrels, a good, properly maintained air filter is still a must.

Pistons are moving up and down at a rate of more than two thousand times per minute, and when dirt or any abrasive is introduced into the combustion chambers, it causes a lapping process which rapidly wears metal away. No engine can digest dirt and provide a satisfactory service life. 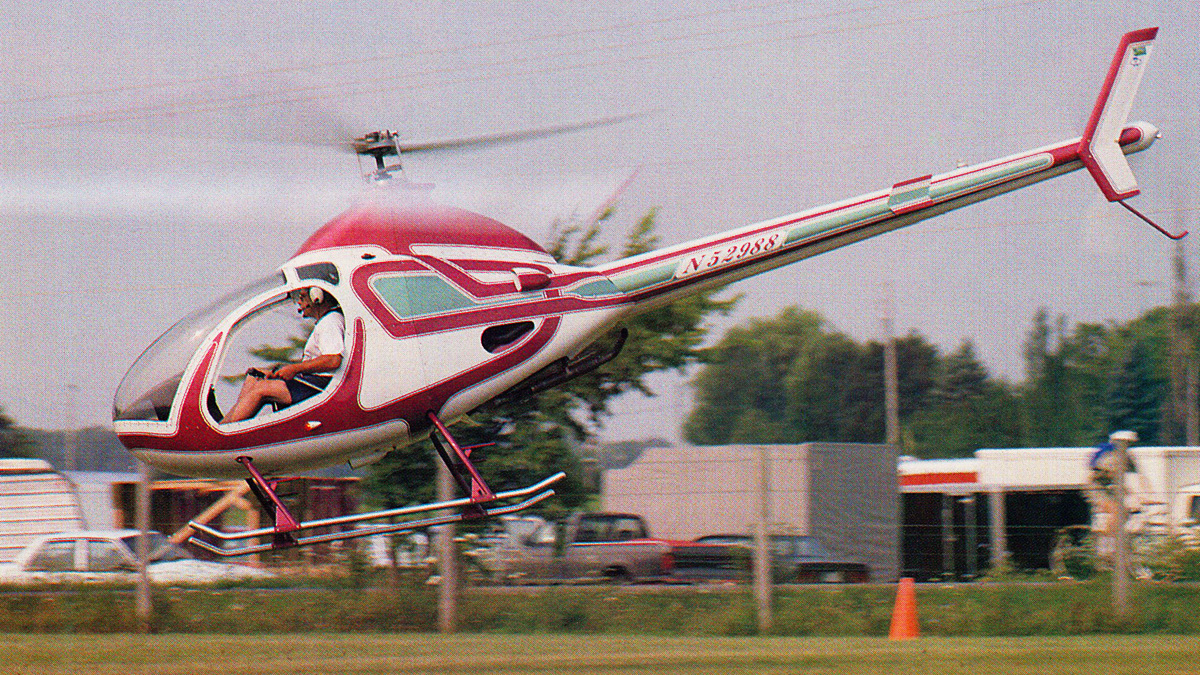 Article Name
Oshkosh Rotorcraft 1994
Description
There were ultralights and rotorcraft at Oshkosh this year. The Oshkosh Rotorcraft scene doesn't change much, but when it does, it does it in a big way.
Author
Mike Glair
SHARE TWEET PIN SHARE