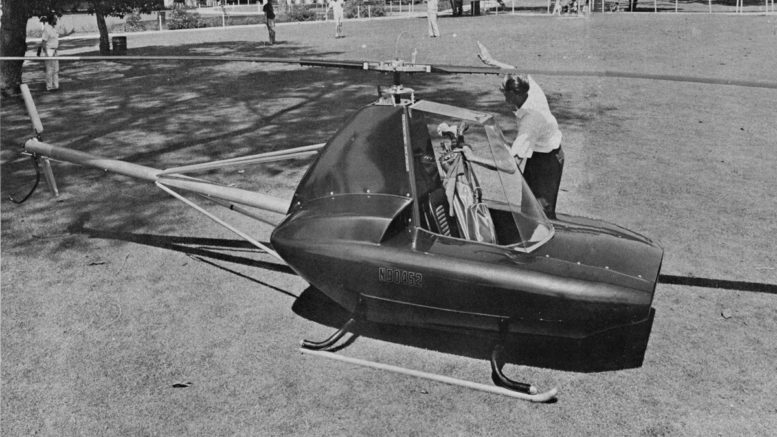 This Stylish Newcomer Seems to be Saying: Color Me Fun!

If you are the kind of guy who can lay out upwards of twenty-five grand for a helicopter, you belong to a pretty exclusive club and I wish you lots of luck.

But if you’re down there in the canned beer and chopped beef bracket like this writer, the new Schramm Javelin is likely to be more your meat. This sporty little chopper, now barely hovering in prototype form, was born with more built-in sex appeal than most rotorcraft ever achieve, even in the full bloom of maturity.

The story of B. J. Schramm’s remarkably appealing sport helicopter began in 1958 when the young designer built and flew a Bensen gyrocopter. Convinced from that experiment that the only way to go was up, Schramm has been looking in a more or less vertical direction since.

LEFT: Tail rotor hub is carried on aluminum tube, and is linked to main rotor. A spur guards it from tail-low landing.
RIGHT: Spartan panel and uncluttered cockpit shown here. Temp gauge is for water cooled outboard engine in prototype.

The result is the Javelin, five hundred pounds of high-style helicopter due to start its FAA type certification program in time for approval “within one year,” according to Schramm. Production plans are unsettled at the moment, since a move to a new area is contemplated, but Schramm is talking about one-a-day production for the Javelin following certification.

Powered by the same 100-hp Continental 0-200 that pulls so many Cessna 150s around the sky, the Javelin is going to start life as a single-seater with a top speed of 74 knots. The designer expects a rate of climb at sea level of 1,200 fpm, a service ceiling of 11,500 ft and a hover ceiling of 3,500 feet outside the ground effect on a standard day.

Inside ground effect, the figure is 5,000 feet. After FAA certification as a single-seater, Schramm intends to widen the Javelin helicopter cockpit, install an extra seat and a bigger bubble canopy, and go after two-place approval. 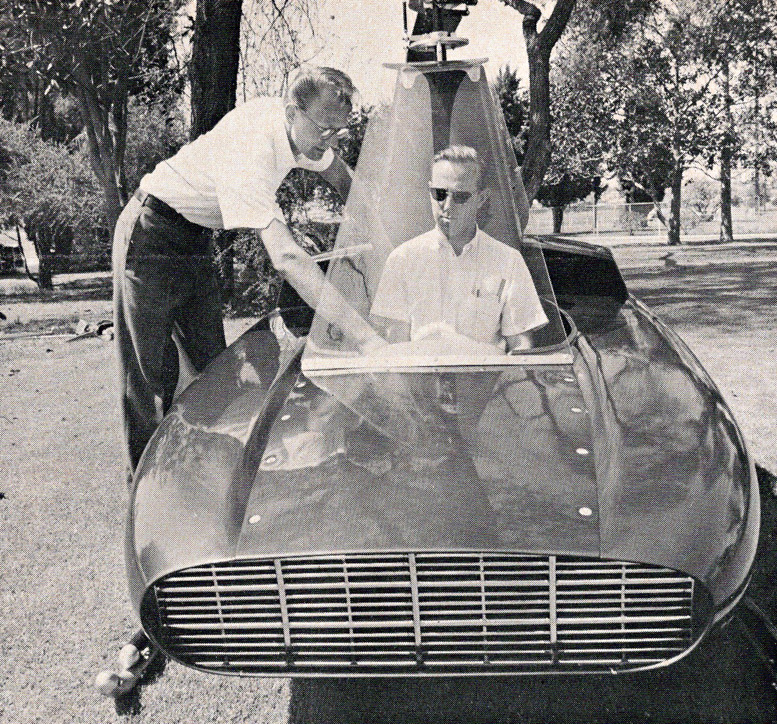 The Javelin in its present form has lifted more weight than would be involved in the second seat and its passenger, the designer noted. Beyond any question, the thing about the Javelin that attracts the most attention is the styling. This little machine simply reaches out and grabs you by the eyeballs as you walk by.

The metal work is beautifully done, and probably could not be duplicated on anybody’s production line. The cockpit is nicely air-conditioned at present, since it is open at both sides, and the strip of plexiglass in front serves as little more than a bug deflector. 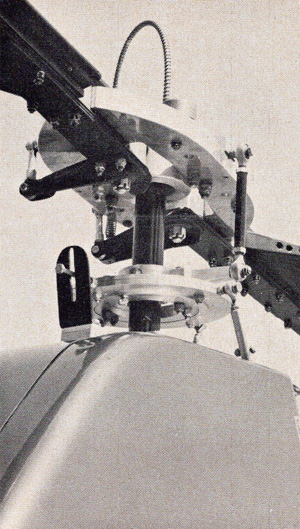 Main rotor hub was handcrafted by the designer. Patent is being sought on the special laminate in rotor blades.

Production models, however, are slated to have wrap-around canopies. The Javelin helicopter prototype was lovingly crafted, a piece at a time, by the designer himself, who took the trouble to go to machinist’s school so he could learn to do the machine work himself.

It is basically little more than a welded steel tube skeleton with some artistically designed sheet metal skin, and a length of aluminum pipe stuck on at the rear to handle the tail rotor. But then, all a Turner seascape amounts to is a piece of canvas with some paint daubed on it, and a wire to hang it up.

What Schramm has done with five hundred pounds of assorted ironmongery is hard to believe, but the accompanying photos show that the sharp little Javelin does, in fact, fly. Large Southern California television audiences have watched it do so.

Scrupulous reportorial honesty compels us to point out that the longest flight to date has been some twenty minutes, with speed not exceeding 45 mph and maximum altitude not exceeding forty feet.

Forty feet is, however, outside the ground effect, and nobody is taking bets against the Javelin going right on up when the time comes, which it soon will attempt during the certification program. One continuing problem with the prototype — and it is a problem which probably has plagued more prototypes than all other problems put together — has been engine cooling.

While the Javelin helicopter production models will have an air-cooled Continental aircraft engine, the prototype is powered by a 100-hp water-cooled outboard marine engine. This means a radiator, and the difficulty of finding a place to put it. 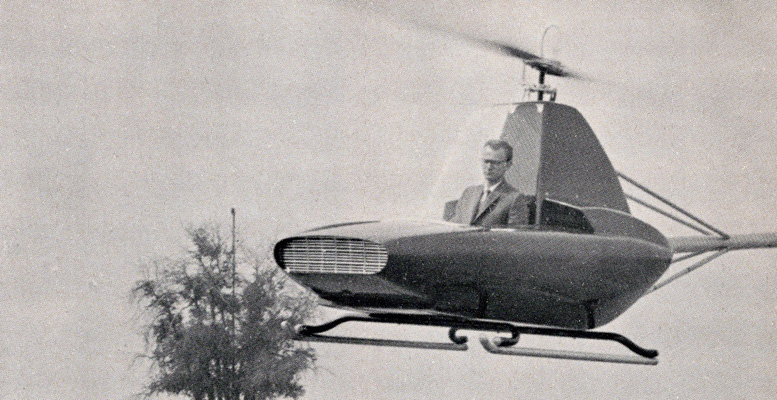 Late for the golf match? Prototype of Javelin sport helicopter points to a new solution for sportsmen on the go.

Schramm put it below and behind the pilot, where there would be relatively little airflow over it, because that was the only available place to put it. To provide air flow over the cooling coils, a fan was installed. At this writing a bigger radiator and a better fan are sitting in the shop awaiting installation. The air-cooled Continental will, hopefully, cure all this.

Other problems? Limited test flying hasn’t turned up any significant ones, Schramm says, but he is quick to point out that it is much too soon to make predictions. After all, the purpose of the certification testing is to discover flaws.

The designer envisions a number of utility applications for the Javelin, most of which either could or definitely would involve removal of the sporty body. For pipeline or power line patrol, utility work on farm or ranch, crop dusting, etc., the body panels can be detached from the frame members and the aircraft flown in skeletal form.

The mere mention, however, of putting the Javelin to work for her living seems almost profane. Everything about her, from concept to contours, cries out that this machine is for the playboy, not plow boy. The Javelin trails nicely, and has been towed all over the place behind a Volkswagen.

This kind of portability is mighty handy in case your back yard is cluttered with clotheslines or birdhouses, because you can winch the machine onto a trailer and head for some nearby vacant lot. (Try, however, to select one approved by the friendly FAA for helicopter operation.) 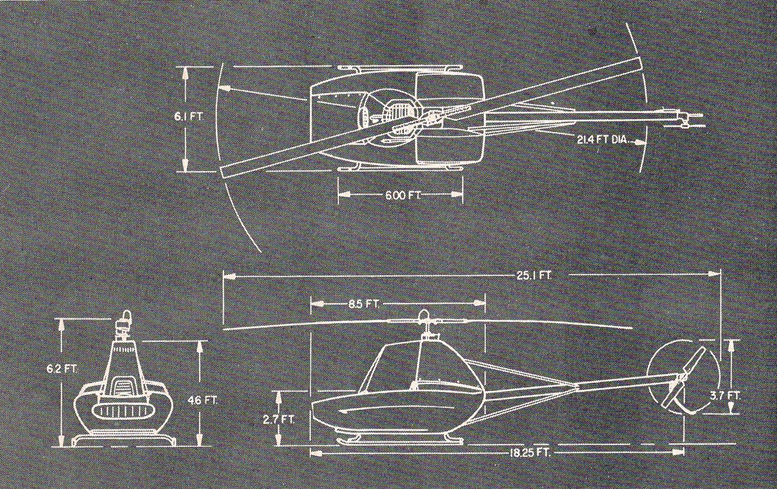 You can’t quite store the Javelin in a kitchen cupboard, but a garage will do nicely. The machine is narrow, only a hair over six feet wide, so they’ll be a good deal of room left in the average one-car garage. You won’t be able to shut the door, however, because the front rotor blade sticks out too far.

For people who fear that two robust burglars might sneak in and birdnap the Javelin helicopter bodily, Schramm has made a quick-disconnect provision which allows you to remove the rotor blade in five minutes by taking out a couple of bolts.

With the front rotor removed, the garage door will close, because the Javelin is no longer than a Lincoln Continental, to which it bears still another comparison: both of these stylish vehicles come high.

There is no use putting it off any longer: we are bound to tell you that this sexy little jewel is going to set you back in the neighborhood of ten grand. Eight to ten, says the designer, is the figure presently being jock-eyed around as the target zone for initial sales of the single-seat version. The two-seater will, it goes without saying, cost more.

Compared with a base price of under $7,000 for the Cessna 150, it makes you think. But then, with anything like the 150’s mass production unit costs could come down, Schramm points out. And compared with the basic price of any other helicopter of comparable performance on the market, the Javelin is in what Wall Street calls the buy range. 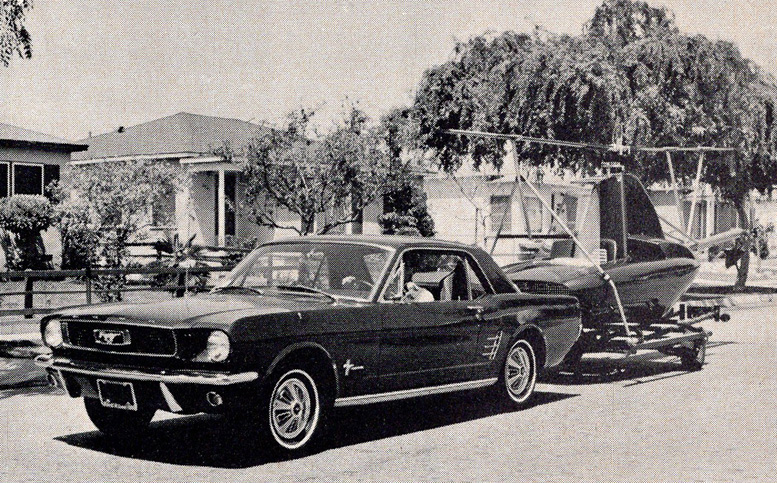 Designer, sports car and Javelin are a picture of fun and games on road. ‘Copter trails well, lives in garage.

Between $90,000 and $100,000 has been invested to date in engineering and prototype development, Schramm claims. The present design is not the first: the prototype evolved through several design stages. But once the final blueprints were drawn, Schramm says it took him just forty-five working days to build the Javelin.

The production model, for which Schramm estimates a potential market of two to three hundred per year at the target sales price, will embody certain relatively minor changes, but will be essentially the same aircraft. Improvements will include a completely enclosed canopy, and a strengthened floor plate to permit easier entry to and exit from the cockpit.

When can you buy this vest-pocket helicopter? Don’t hold your breath, for the designer says it will be at least a year before anything gets to the public. And with type certification, a move to new facilities and establishment of a production operation still to be coped with, it may take more than a year.

In addition to completed copies, Schramm says plans are being developed to market Javelin helicopter kits and components for the do-it-yourself birdman. 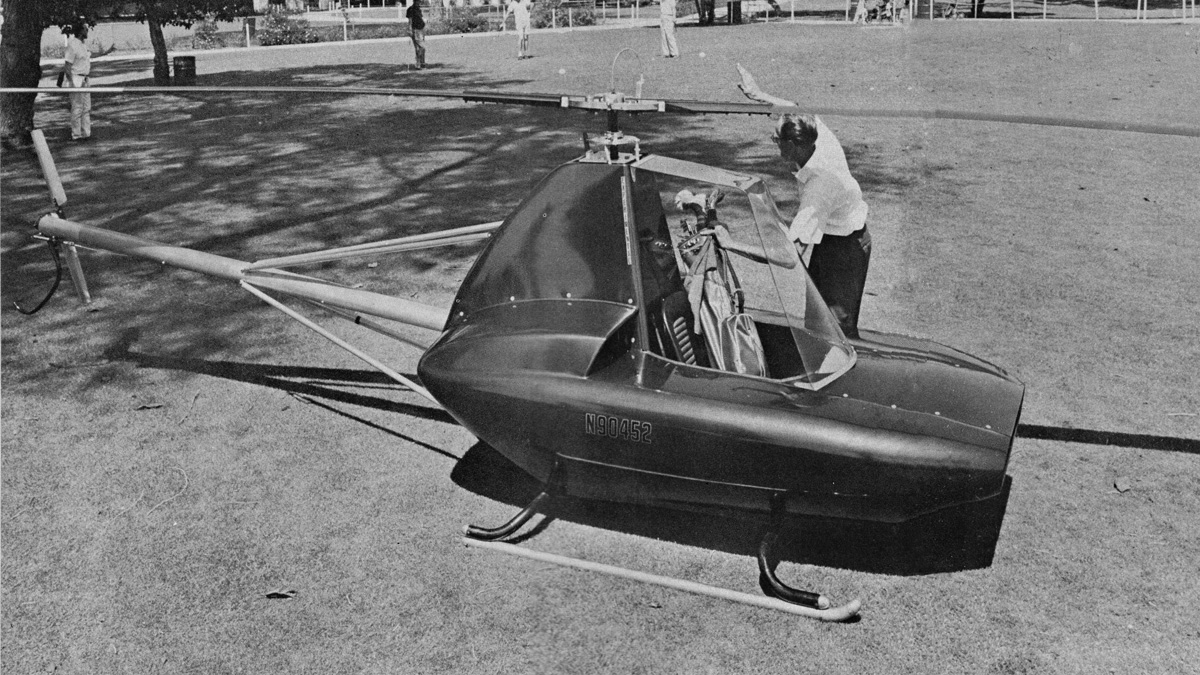 Be the first to comment on "The Sharp Little Javelin Helicopter"