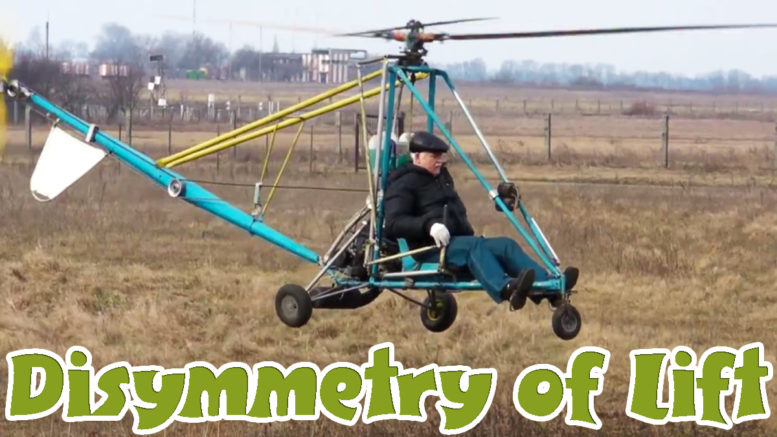 Does anyone remember that mid 80’s helicopter show Airwolf? I believe it had Jan-Michael Vincent as the pilot and Ernest Borgnine as his co-pilot / crew chief. I also recall the ship being a modified Bell 222 with fake jet engines in the main land­ing gear nacelles. What I remember the most is that little high speed feature it had…Turbo!!!

This is when Vincent would push a button and light off the two jet engines. It looked like they were going Mach 1 (761 mph or 661 kts at sea level) or better to catch the bad guys. And like most movies and shows they always seem to make the helicopter do amazing things like fly at supersonic airspeeds. You all know this is impossible…right??? Remember that little problem called Dissymmetry of Lift.

The relative air flow is no longer uniform for each main or tail rotor blade depending on movement or wind. Anytime a rotor system moves from a no­ wind hover to forward, lateral or rearward flight there is DoL; even during a hover with any kind of wind.

If this were allowed to exist the helicopter would roll left or right to the retreating side, depending on rotor direction, due the lower performance of that side. I can’t envision how much intuition Igor Sikorsky and others had to figure this out from scratch. 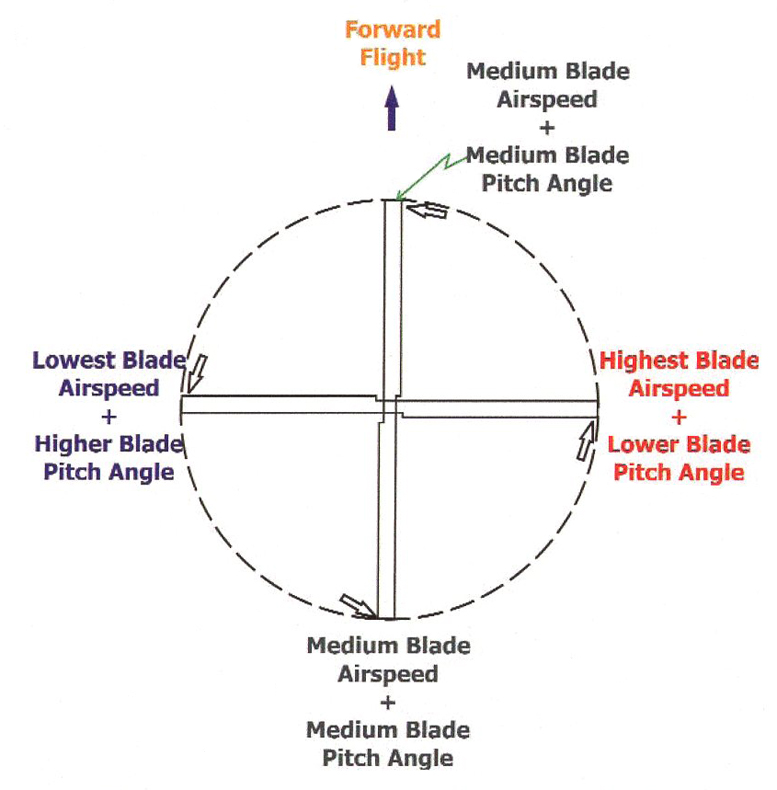 Figure 1. The relationship of main rotor blades at each 90-degree locations.

Luckily, today’s rotor systems self compensate for this all on their own — the pilot has no control to adjust for DoL. It is accomplished through blade flapping, feathering, flexing or a combination of these.

Two blade or semi-rigid rotor systems like RotorWay’s, Safari’s, Helicycle’s, Robinson’s (Editor’s note the R-22 has a flapping hinge as well as the tee­tering head), some Bell’s, etc., use flapping due to the teetering ability of the main rotor hub. If one blade goes up the other goes down; it’s that simple.

Three or more blade or articulated rotor systems like Eurocopter’s, Sikorsky’s, MD’s, other Bell’s, etc. use mainly flapping from a blade hinge located near the rotor hub or just plain blade flexing. Each blade can flap or flex independently of the other.

Let’s take a look at the attached diagram. It shows the relation of main rotor blades at each 90-degree location through a complete counterclockwise rotation during forward flight. Note that the two areas near the front and rear of the helicopter (green) represent about the same blade speed and pitch.

As we move from, say, a zero airspeed – zero-wind-hover to forward flight (or hovering facing into a wind) the rotor system self adjusts by allowing two distinct things to happen with respect to the advancing and retreating blades. The advancing blade, because it is “travel­ing faster”, tends to generate more lift causing the blade to flap up.

The flap­ ping up causes an “up flap” velocity which vectorially adds to the air velocities caused by both the rotation of the blades and the forward speed. This vector addition results in a change of direction of the relative wind vector resulting in the angle of attack between the chord line and the relative wind being reduced with the subsequent reduction in lift.

Without this reduction in lift on the advancing blade and the concomitant increase in lift in the “flapped down” trailing blade the helicopter would have a marked tendency to roll into the trail­ing edge blade. Hooray for the teeter hinge!

Say for example the rotor system is turning at 300-kts (which is about the average blade tip speed for most helicopters) and your forward airspeed is, say, 100-kts. Now attach these speeds to the second diagram, Figure 2. Your advancing blade is at 400-kts and your retreating blade is at 200-kts. 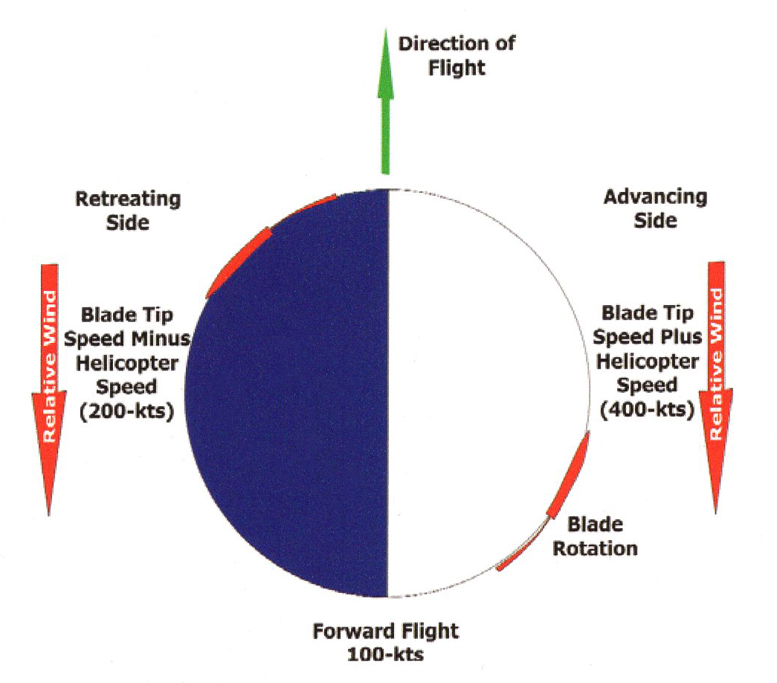 So back to our movie makers and Airwolf kicking on the Turbo button which makes it go maybe just a mere 400-kts. And the blade speed is still our average of 300-kts. Now let’s do the math and you get the advancing blade traveling at a whopping 700-kts (that’s well above supersonic).

However, the retreating blade is at a negative 100-kts!!! Uhhh…I think the retreating blade stalled a long time ago and the bad guys got away. Too bad they couldn’t slow and maybe stop the main rotor prior to going super fast so it could act like an airplane wing at those speeds. (Editor’s Note: Carter Copter?)

Retreating Blade Stall…what is it?

Given enough angle of attack and/or low airspeed most any airfoil will stall…helicopter blades are not immune. As we discussed above, retreating blade stall is a major factor in lim­iting a helicopter’s top forward speed or Vne.

The onset can be felt by a pitching up of the nose, low frequency vibration and ultimately a roll in the direction of the retreating blade. Common aerodynamic sense tells you the retreating or stalling side will make the helicopter roll to this side. But Gyroscopic Precession moves the effect of the stall to the rear of the helicop­ter causing it to pitch up first. 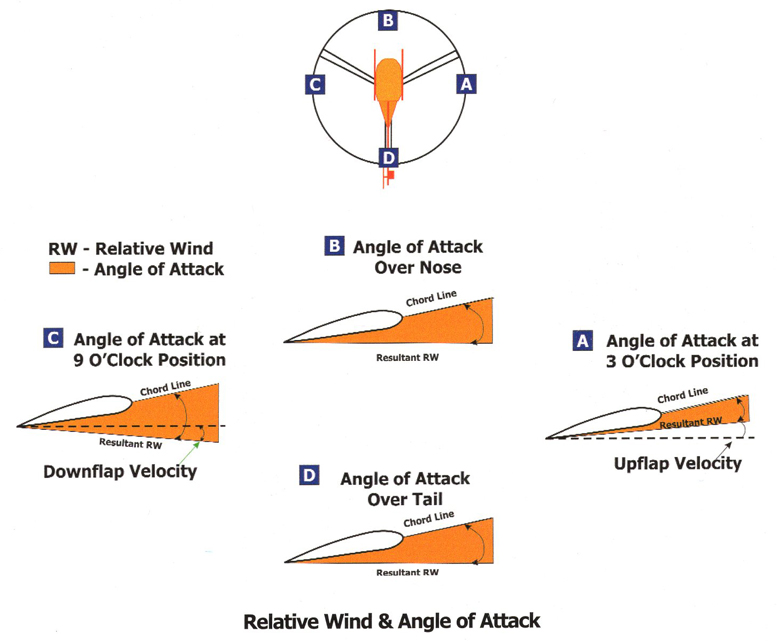 Additional items that are conducive to retreating blade stall are high gross weight, low rotor rpm, high DA (Density Altitude), turbulence and/or steep/abrupt turns. As your altitude is increased, higher blade angles are required to maintain lift at a given airspeed. Therefore, retreating blade stall is encountered at a lower forward airspeed once at altitude.

Most helicopter manufacturers publish charts and graphs showing a Vne decrease with alti­tude. A placard is usually placed with­ in easy view of the pilot to adjust for this as altitude is gained. When recov­ering from retreat­ing blade stall the pilot, through good training, should know instinctively what to do.

Aft cyclic can then be used to slow the helicopter. In some cases retreating blade stall is self correcting if not allowed to develop fully. As the helicopter pitches up on its own it also will lose some airspeed. However, this should never be tested by anyone other than a qualified test pilot. 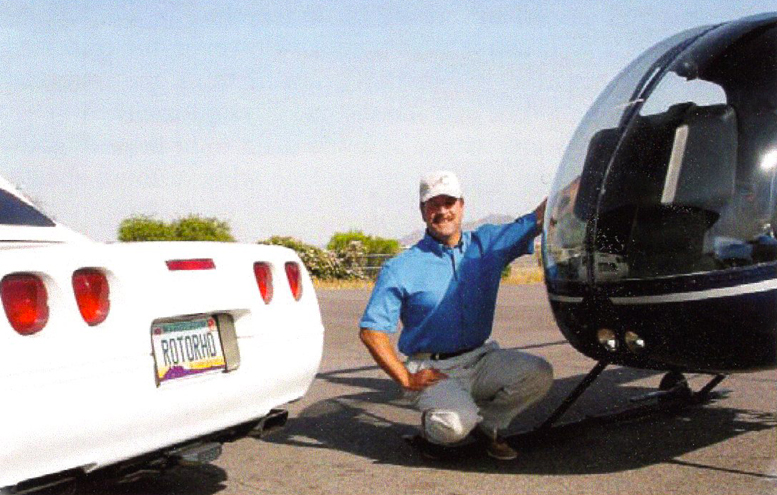 Is Bill hiding from all the doom/gloom guys? With that grin I can’t blame him.

I hope this information has helped you to better under­stand the meaning of dissymmetry of lift and retreating blade stall. It is important for you to know you and your rotor systems limitations with regard to high forward air speeds and altitudes.

We’ve discussed some of the basic mechanics of the helicopter’s rotor systems and reviewed how to respond to retreating blade stall. Hopefully this knowledge will aid in your quest to be a smarter and safer pilot. And if I see any one of your helicopters with a Turbo button in it I’m going to smack you. 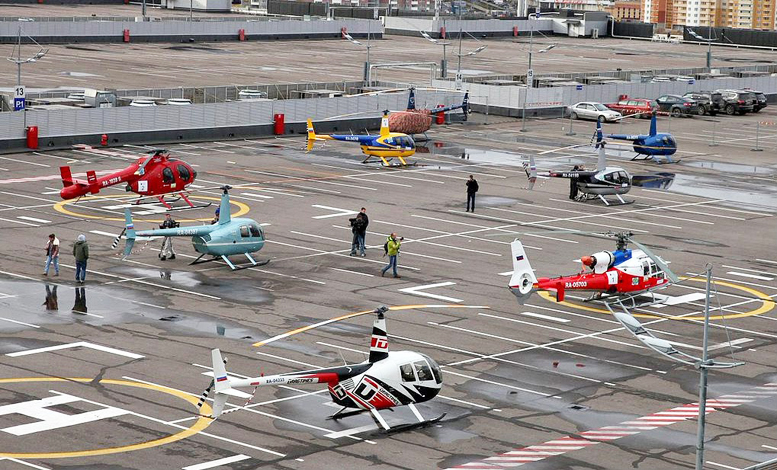 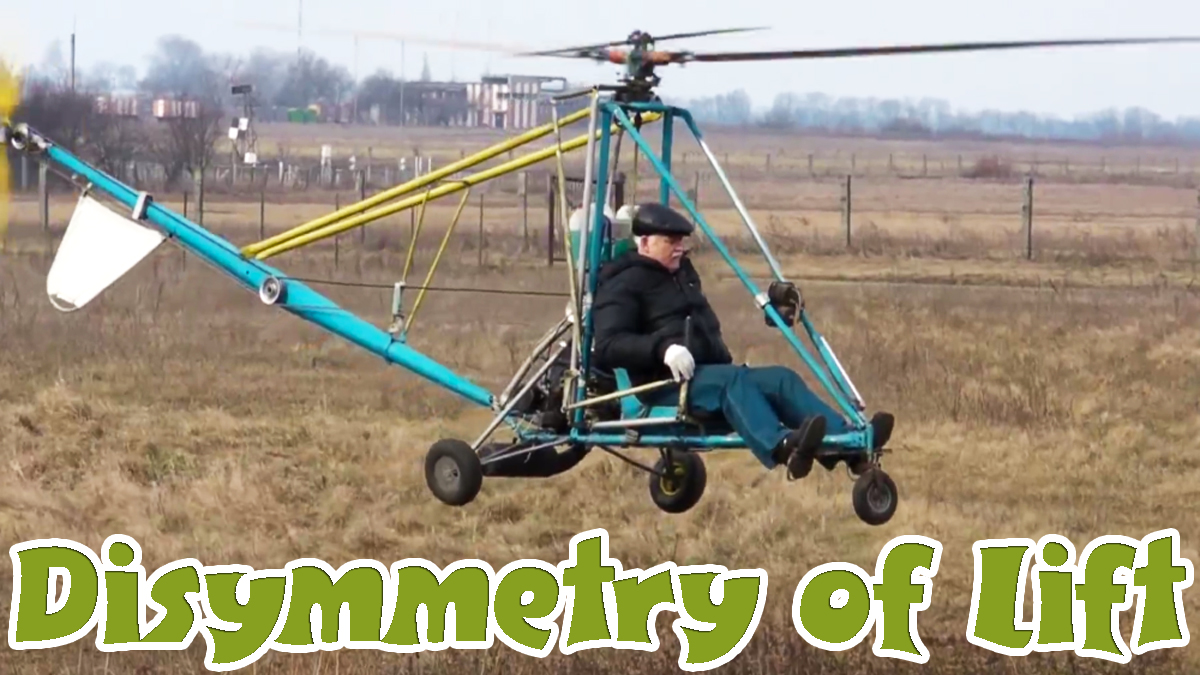 Article Name
Dissymmetry of Lift and Retreating Blade Stall
Description
Bill takes us through the theory of Disymmetry of Lift - (DoL) in laymans terms. What is blade stall and why doesn't a helicopter flip sideways in forward flight?
Author
Bill Orth
SHARE TWEET PIN SHARE