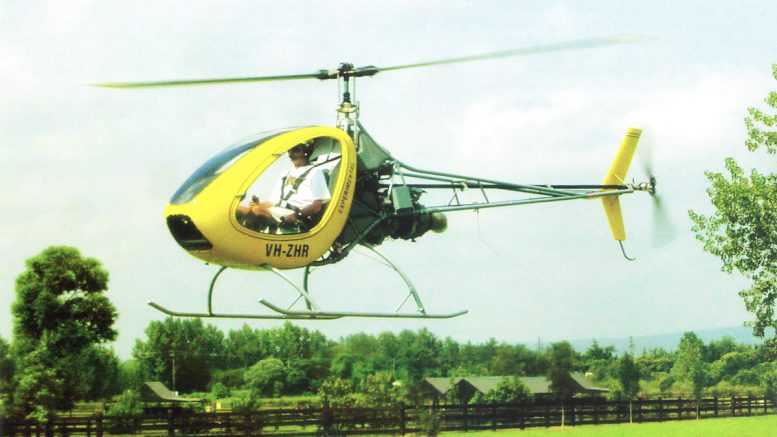 Australian Helicycle helicopter owner Hermann Roesch is no stranger to the Gyro scene in Australia having begun flying in 1987 at Erskine Park in Sydney under Alan Bridger’s instruction. He is still flying the same Bensen style Gyro he started in all those years ago. He is obviously very “familiar” with this machine as he took out a few trophies at last years Nationals at Cooma, including the spot landing and the much coveted flour bombing competitions.

In Feb 2003, Hermann decided he needed a new challenge in his life. This was for him to become the first person in Australia to build a Helicycle single seat kit helicopter. Helicycles are a kit manufactured by the Eagle R&D company in Idaho, USA.

This company was founded by the late B.J. Schramm who was the pioneer of the successful kit helicopter market. He is credited with over 12 different kit designs including the original Rotorway machines. The Helicycle is without doubt his crowning achievement when you see the no-nonsense, well thought-out engineering and smoothness of the machine in the air.

Hermann originally ordered the Helicycle kit helicopter with the aim of it being powered by a Hirth piston engine, which was the factory recommended power plant at the time. His order coincided with the development of a Solar T62 turbine powered machine by a customer, Doug Schwochert in the US. This conversion impressed B.J.Schramm so much that he adopted these amazing motors as the standard for all future machines.

The Solar T62 turbine is used by the military in the US as an auxiliary powerplant for airconditioners and generators. This way a similar fuel can be used to power machinery and equipment alike. This single stage turbine will run on just about anything including Kerosene (which is Hermann’s choice), Jet A1 and even diesel (although a trail of black smoke through the sky may cause more alarm than necessary). Eagle R&D secured a large number of these turbines and supply them serviced and test run with the kit.

Herman was undecided at first when offered a turbine option, but to his credit did not shy away from having to learn something new and tread new ground. The finished Helicycle Kit helicopter is well worth any hassles along the way.

Part of the way through the build, Hermann began helicopter flight training with a company at Bankstown airport, he was seemingly a star student when learning Auto-rotative landings, it took him a while to admit to the instructor of his 11 yenrs Gyro experience where every landing is an
Auto!!

With the helicopter licence out of the way the build continued, although an 8 month wait for the turbine to get to Australia really slowed things
down for a while.

The Helicycle is VH registered in the experimental category so has to abide by a long list of rules and regulations set down by CASA to be legal. It was built under the 51% rule and so Herman has a build history log full of photos and paperwork. The final sign-off by CASA was problem free, another indication of the quality of Herman’s workmanship and the good design of the kit itself. 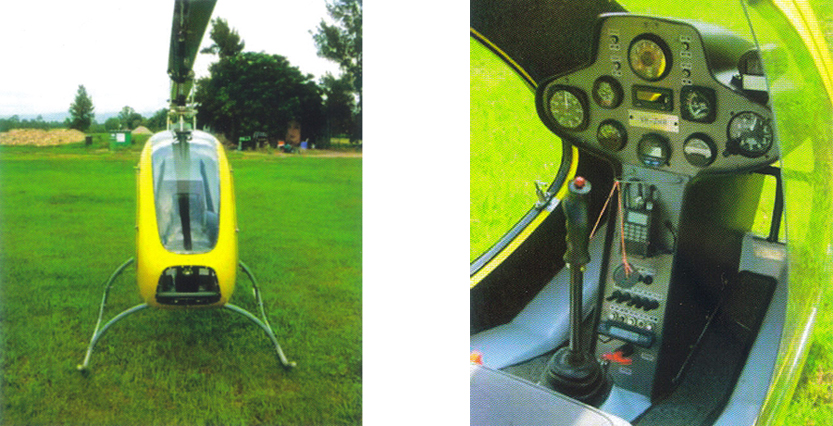 Currently the Helicycle is undergoing its Phase 1 test flying period of 40 hrs. Eventually Hermann hopes to be able to trailer his creation to Gyro events and cruise around local area flights. Although he said it’s no fun cruising at 75 knots (with a VNE of 95) when all your friends are cruising at 40-50knots behind you. That’s where his Bensen style Gyro will keep its pride of place.

There are another 4 kits being built in Australia now and a couple more in New Zealand. This process will be made so much easier because Herman has done all the hard work first time around. He has offered his help to those building future kits and the Eagle R&D factory has agreed to allow Herman to act as an progress inspector on their behalf.

Herman deserves a big congratulations for completing this Helicycle helicopter kit. The workmanship is outstanding with his attention to detail second to none. Keep your eyes open for a special appearance at an airfield or in the sky near you, Its definitely worth the effort to go and see it. And did I mention the sound of that turbine spooling up? 61,000 RPM in all their glory!!