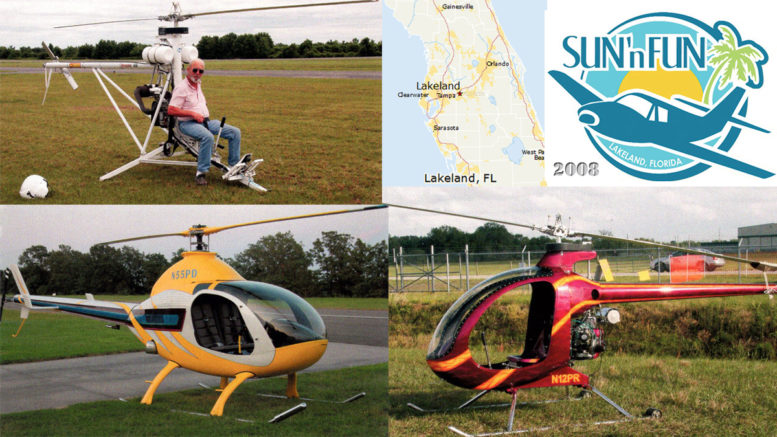 This year Sun’n Fun saw a frog strangling rain the Sunday before the opening. There were motor homes at Chopper Town, parked out where the experimental rotorcraft were expected to park, that were afraid to move. Late Monday the big pusher motor homes were seen blazing across the swampy grass areas headed for the their parking spot, their air horns going full blast to alert people walking about.

The motor homes did not dare stop until they got to more stable ground.

Helicopter participation at this year’s show was down. There were two Safaris, four Mosquito helicopters and a ship that looked like a RotorWay Exec, but was John Spurling’s JT300, but no RotorWays and no Hummingbirds.

John Snider put on an awe inspiring display with his hovering autos and autos from the air to ground. In 2007 he won Oshkosh Grand Champion with his little ship. John has produced a video showing not only the Mosquito helicopters flying qualities but also the elements of helicopter flying to and including a simulated stuck pedal emergency slide-on landing. This video is a “Must Have” for helicopter enthusiasts and an “Absolute Must Have” for Mosquito owners.

Also seen was a guy sitting on Paul Grieshaber’s ultra-light Mosquito helicopter, manipulating the controls staring into a small tent. Turns out Paul has integrated his controls with an RC controller and actually uses the Mosquito controls to operate this small model helicopter; much better than wearing out your thumbs on those little RC controller switches.

There were two legal ultrative on the controls and have a tendency to explore all the other surrounding zip codes in a short time. While not taking the bird into the air, I did hover-taxi and went through ETL and was com­pletely amazed at the handling qualities. It seemed as stable as a much larger helicopter.

Note also the direction of rotation of the JT300 tail rotor is the “Correct”; this direction yields a bit more tail rotor authority in cross wind conditions. John reports fuel consumption figures in the 10gph range. I think that he has himself quite a bird. It dang sure is not short of power.

The Safari Helicopters. What is there to say? The Lycoming engine, the roomy cockpit, the outstanding visibility, low maintenance and now available, both kit financing and insurance packages. While Mark Richards was engaged in performing a pirouette down the runway in a Safari; a maneuver he had done hundreds of times, the craft suddenly hit the ground, bending the left landing gear, the tail boom and also having a tail rotor strike. The main rotor didn’t make contact and the engine was still running after all the dust settled. 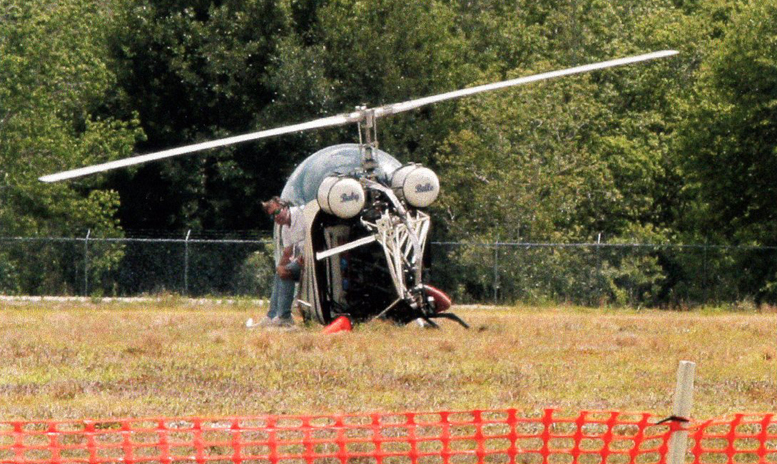 Mark Richards sitting in the doorway of the Safari after the pranging. Now knowing the cause of the inci­dent quickly assures all Safari owners they will not have this problem in their ships. A company who steadfastly maintains communication with its clients.

Mark’s post event inspection showed that elements of the low rotor sensor system had come loose, snagged the Hall Effect device and effectively disconnected the tail rotor drive shaft in the middle of his pirouette. With the loss of the counter torque provided by the tail rotor, Mark did an excellent job of getting the craft down with minimum damage.

The current Safari kits have an engine/rotor tachometer system, (not on the ship Mark was flying), that incorporates a low/high rotor alarm “without” the need of the Hall Effect sensors, thus eliminating this difficulty. 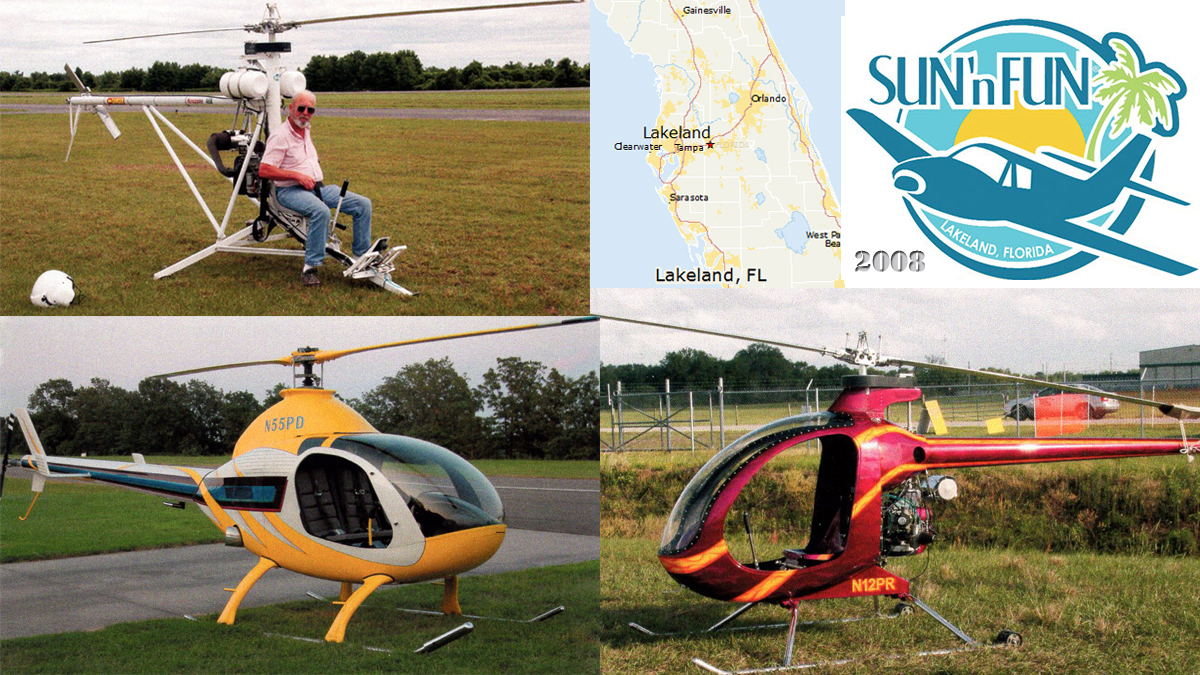 Article Name
Sun'n Fun 2008
Description
The coming of age. Helicopter kits were now established and the main players were dominating the field, though not all were represented at the flyin this year.
Author
Stuart Fields
Publisher Name
Experimental Helo Magazine
SHARE TWEET PIN SHARE