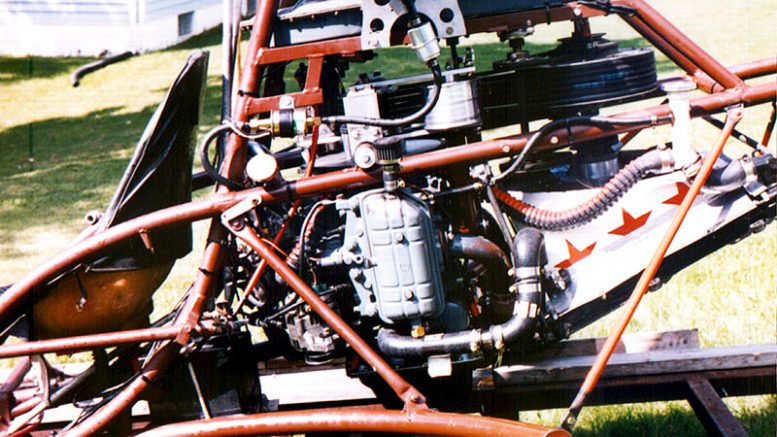 While not a total success, should the project had more time spent on it, there could have been quite a different outcome for this neat little machine. The common factor seems to be that while the Subaru EA81 engine is physically compact and able to be modified for the purpose of mounting vertically in the helicopter, extracting the required power continued to be a challenge while maintaining reliability.

While Doug had much success with updating the Adams-Wilson “Choppy” helicopter to the AW95 plans-built helicopter, an executive decision was made to no longer persue this conversion and move on to greener pastures. Doug later went on to become an integral part of the Helicycle Kit Helicopter operation. 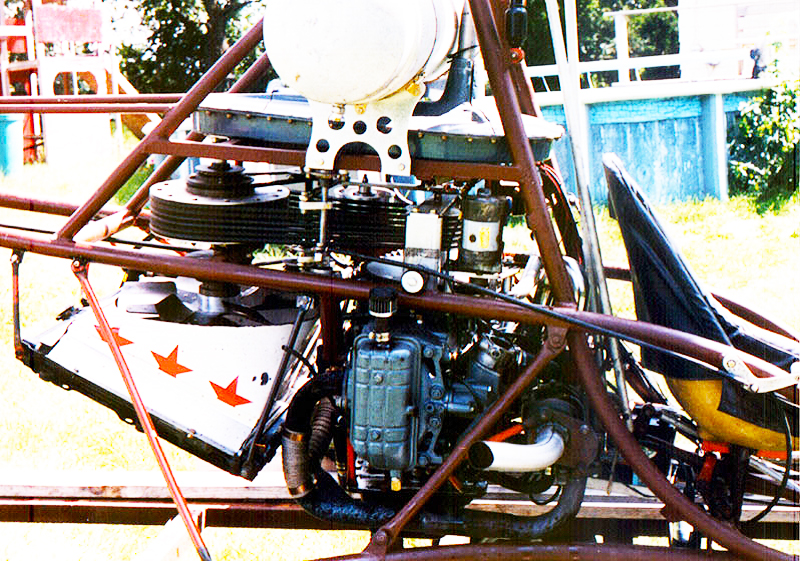 Letter from Doug Schwochert to myself (Adam Aitken):

Here are some pictures of my Scorpion 1 with the turbo Subaru motor.

1. I built a seperate oil tank that was mounted below the engine. It had 2 drains, one from each valve cover, another one to drain the block from behind the front crankshaft seal and one more draining the crank case through the cover that you remove to pull the wrist pins out of the pistons. The turbo also drained into the oil tank.

I drilled into the oil pump suction side and ran a line into the bottom of the oil tank for the pickup tube. This is where i ran into problems. The pickup line needs to be at least 3/4 inch ID pipe or line. I used 1/2 inch line at first and had oil starvation problems. The hydralic lifters were running out of oil. Make the suction lines and passages as large as possible. The oil sump should be at least 2 gallons. There is no crankcase vent on the engine. It uses blow by gasses to push the oil out of the engine. The oil tank is vented.

2. No oil cooler was used. – (usually a standard item due to high turbo oil temperatures)

3. Empty weight on the Scorpion was approx. 475lbs. – (approx 25 lbs heavier than the original engine installation)

4. I custom made an exhaust system to mount the turbo to. (see pictures)

5. I used a carburettor. A fuel injection system with a computer system would work better. I later changed mine over to EFI.

6. I had no cooling problems with this engine. I used an oversize aluminum radiator from a Mazda RX7 rotary motor. Always oversize the radiator. The engines are running at full power and generate lots of heat.

7. The Scorpion drive system is very tough. The Subaru and the original Evinrude boat motor both make about the same HP. 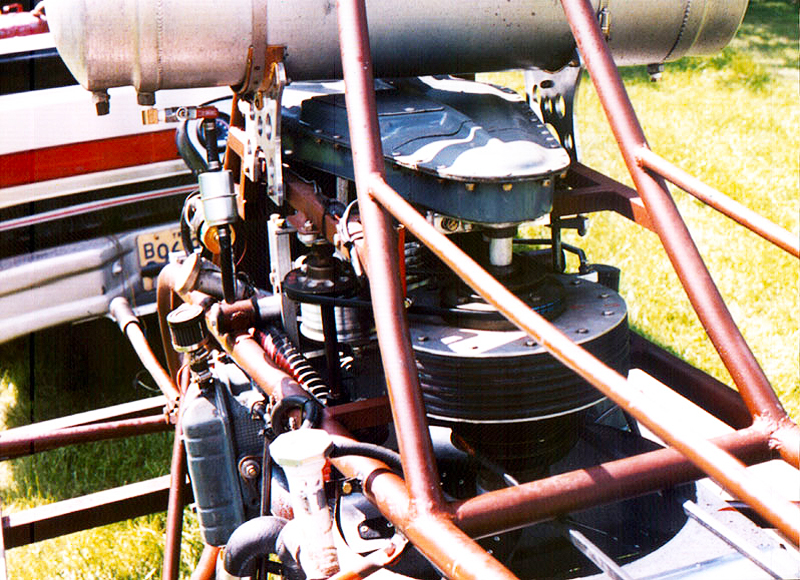 Secondary drive system showing the tail rotor drive and a rear view of the chain oil bath. Updating the chain drive to a cog belt would have be a optional improvement.

EDITORS NOTE: With the popularity of the Subaru EA81 aircraft conversions, supplies dried up quick through the 90’s and early 2000’s and the engine became very hard to find. The engine came in a few different configurations, obviously the more powerful one’s being the most popular including a twin carb 100 hp stock standard model.

Continued below is a photographic journal of Doug’s turbo charger helicopter engine conversion. Historically significant as being the first commercially available, mass produced kit helicopter, the Scorpion one helicopter can still be found flying today, particularly in the U.S.A. They can still be found in original condition, or converted and modified with a variety of different engines and turbines. Why not make your own Subaru EA81 Turbo Powered Scorpion 1 Helicopter? 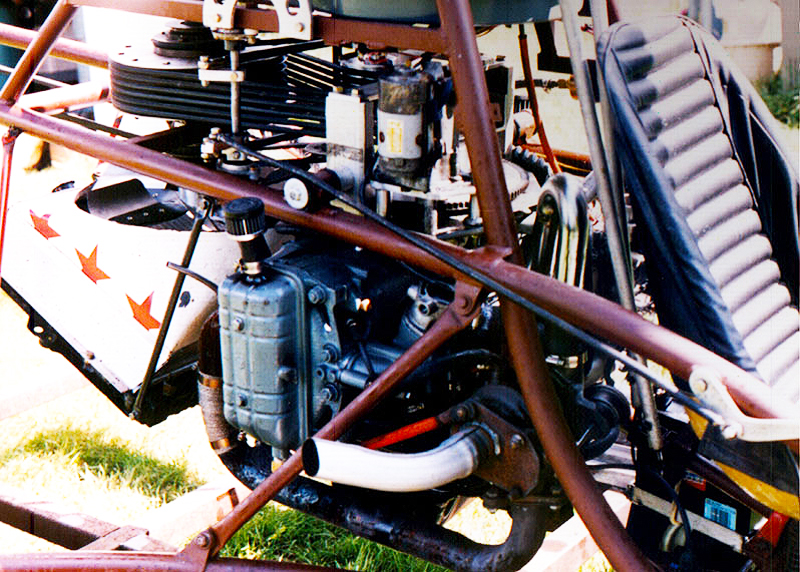 I was not 100% happy with the vertical engine installation. If i had to do it over again i would mount the engine horizontal and use a 90 degree gearbox on the main rotor shaft and eliminate the chain drive main rotor set up and the belt tail rotor system.

Use a shaft drive and gearbox for the tail rotor. I am working on another AW/95 helicopter with this drive system set up on it using a T62 Solar Turbine engine on it. 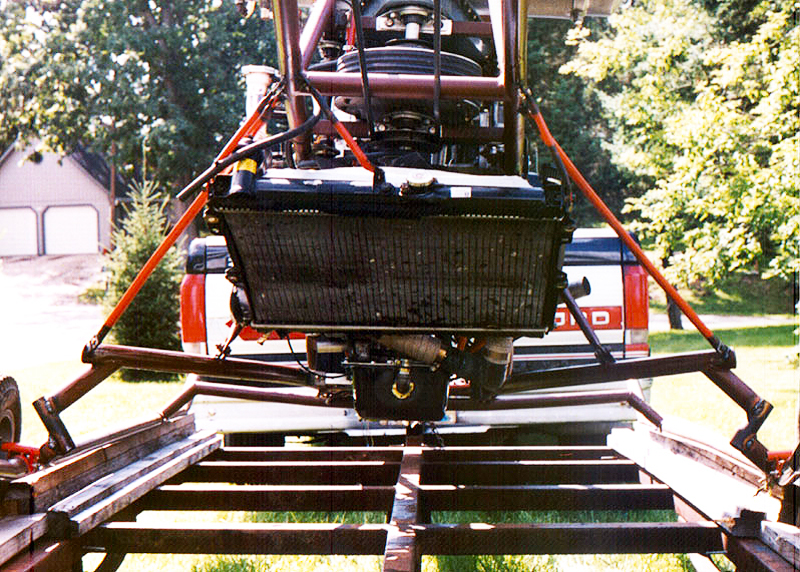 Editors note: I would like too personally thank Doug for taking the time too share his experiences in the experimental helicopter arena.

PLEASE NOTE: Doug Schwochert no longer has this helicopter or offers any support for the modifications made to the Scorpion One Kit Helicopter. It is unknown where this helicopter is located today and no further information has surfaced regarding it. All information is © copyright protected.

Early models struggled to see the 72 hp quoted in stock configuration and required an unreasonable amount of work to bring power levels up for helicopter use. The standard turbo charged model offered more power but was not designed to run at sustained high RPM’s creating higher thermal loads on the engine. Had the engine been custom turbocharged along with an aftermarket EFI computer matched to this helicopter, it would have been made to breath easier and probably generate more power reliably.

There were aftermarket companies offering turbo conversions to the standard EA81 engine but they have since dissapeared. One in particular had hundreds of hours of proven reliability using throttle body injection (TBI) in a fixed wing aircraft producing over 100 hp continuously. 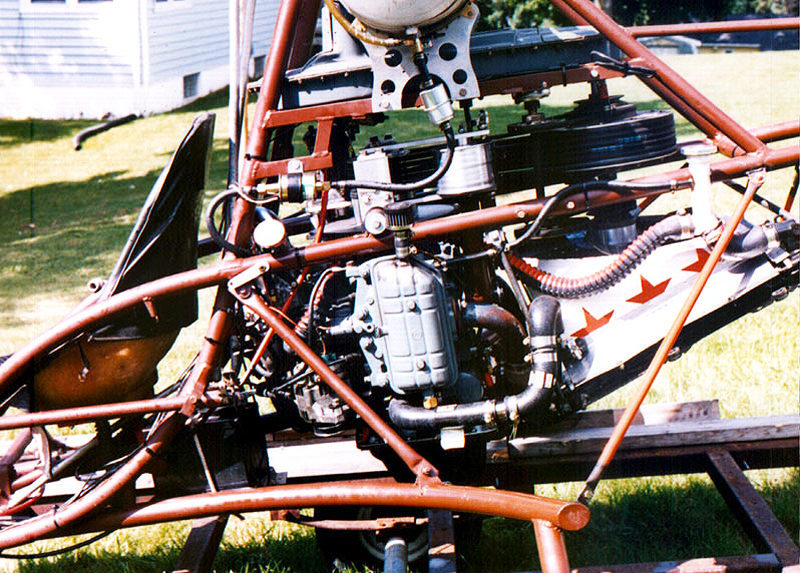