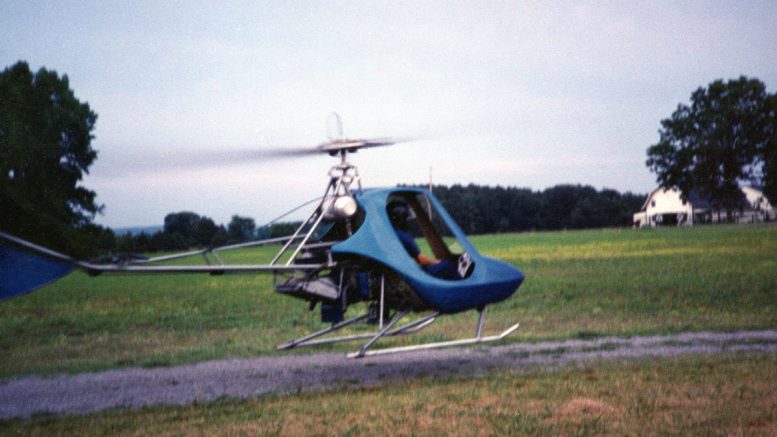 The Scorpion kit helicopter was designed by B. J. Schramm and introduced to the public in the early 1970’s. Originally powered by a 115 hp outboard engine the helicopter became a enviable project for homebuilders and do-it-yourself types.

Promoted as capable of 75 mph cruise speed with a range of 140 miles, the kit could be built from 15 separate sections totalling approximately $3,650.

Many kits were sold to both the back-yard dreamers and serious vertical aviation enthusiasts. The helicopter was of traditional layout incorporating a belt driven tail rotor and unusual through shaft collective pitch control system. The vertical orientation of the engine eliminated the need for complex and expensive gearboxes. Drive to the main rotor shaft was a primary clutch-able v-belt drive and secondary chain drive in an oil bath for lubrication.

The engine was thirsty, noisy, at times temperamental and had some noticeable vibration. Other than that, it was a neat little chopper that with the required maintenance, proved a fun an affordable option to building and flying your own helicopter. 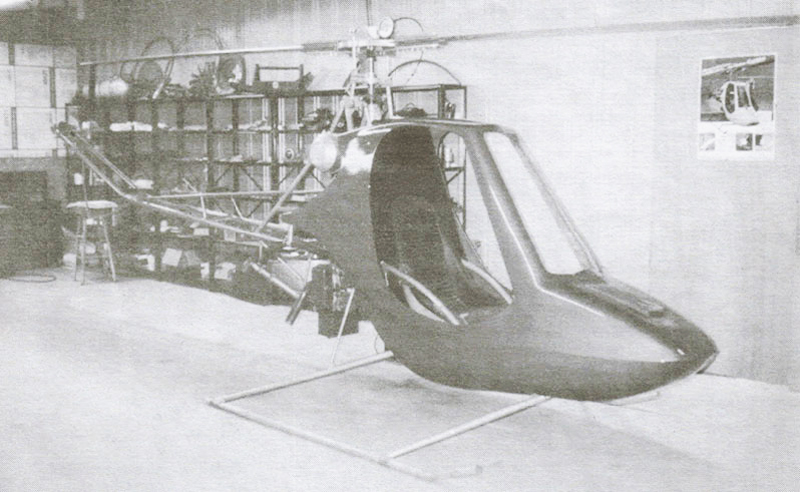 There are still many of these helicopters in both built and original kit for scattered around the world today. They pop-up for sale on eBay and other aviation classifieds from time to time at very reasonable prices. If you fancy yourself as an avid helicopter experimenter it might be a great place to start your journey into vertical aviation.

Enclosed are some of the photos of my Rotorway Scorpion helicopter. I totally rebuilt this ship from the ground up around the Subaru EA81 engine. Several modifications have been made to the airframe. The water pump was eliminated from the frame with the fan counter drive which eliminated three (3) belts. The radiator fan is now direct drive off the secondary shaft. 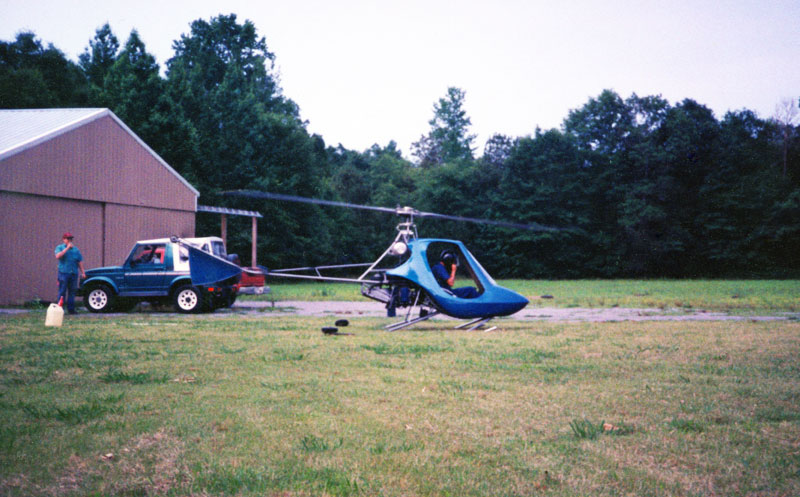 I designed the new flywheel, clutch idler and starter plates. Internal modifications were also made to the crank case for proper oiling with the engine in a vertical position to match the original helicopter installation. The intake is a stock Subaru EA81 unit modified for a side draft carburetor.

The radiator is an aluminium unit out of a Renault car. The engine’s oil system works perfectly and as of now the engine has accumulated ten (10) trouble-free hours – it is smooth and quiet, typical of the Subaru boxer range of engines.

The engine turns the helicopter’s rotor blades counter-clockwise which required some rotor head changes including a sprag clutch and tail rotor drive reversal. The clutch system was designed to allow the new Subaru auto engine installation to start and run without any blade movement similar to the Angel CH-7, Robinson R22 and Hughes 269/Schweizer-Hughes 300 helicopters. This soft-start approach eliminates starter torque impact.

Right now I am running Hughes 269 rotor blades which have proven to be unstable due to the flexing and (built-in) blade twist designed for a three (3) bladed rotor head. I have decided to remove the Hughes 269 rotor blades and install stock Rotorway helicopter blades. The ship has worked out very well and can not be compared to the Evinrude configuration. 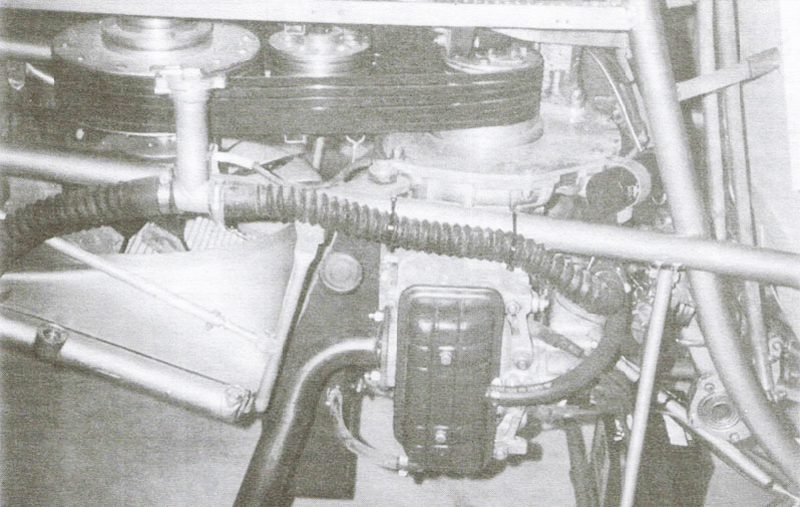 Close up right side view of the Subaru engine. Note the coolant filler tube and cap next to the fan cooled radiator. Ron also had to modify the engine oil passages and sump to allow the Subaru powerplant to operate properly in a vertical position for the helicopter.

The ship has hovered but I have experienced instability problems, however I feel I will overcome these problems as Igor Sikorski did.

The Scorpion One (1) kit helicopter is the refinement of B. J. Schramm’s original design first flown in 1965. The power-plants were based on Johnson 85 HP, Evinrude 100 HP and Evinrude 115 HP outboard marine engines. 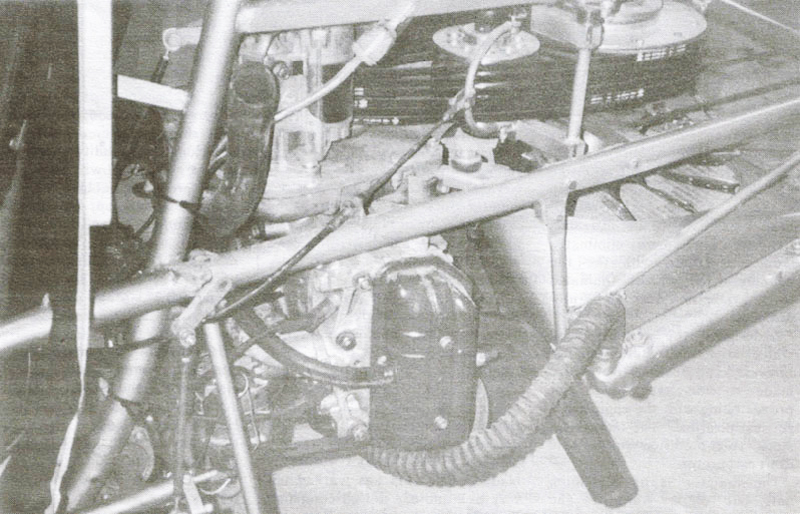 The bell housing and stock starter system are used in this installation. Also note the cable activated clutchable v-belt drive pulley and fan cooled radiator. (Editors note: A custom intake manifold along with light weight starter motor and alternator would have seen some additional weight savings) 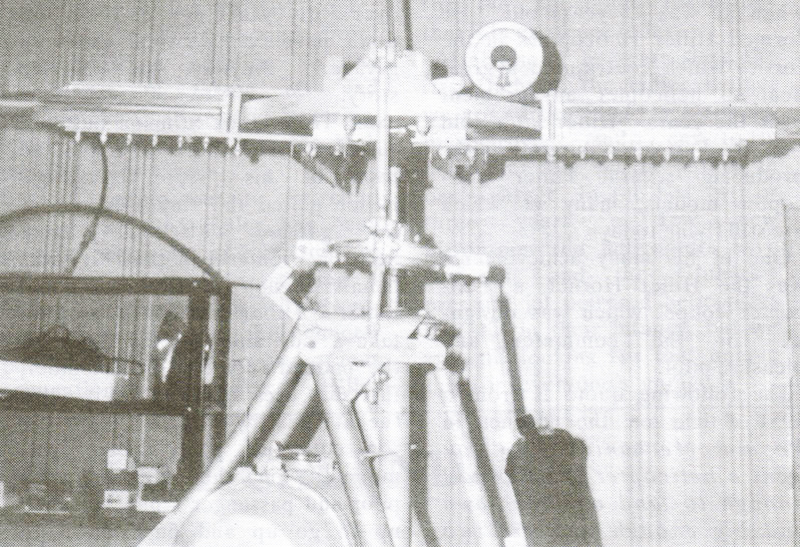 Specifications below are for the original Rotorway Scorpion 1 kit helicopter fitted with the Evinrude 115 horse power outboard engine and stock Rotorway rotor blades, not for the modified version as outlined in this article. 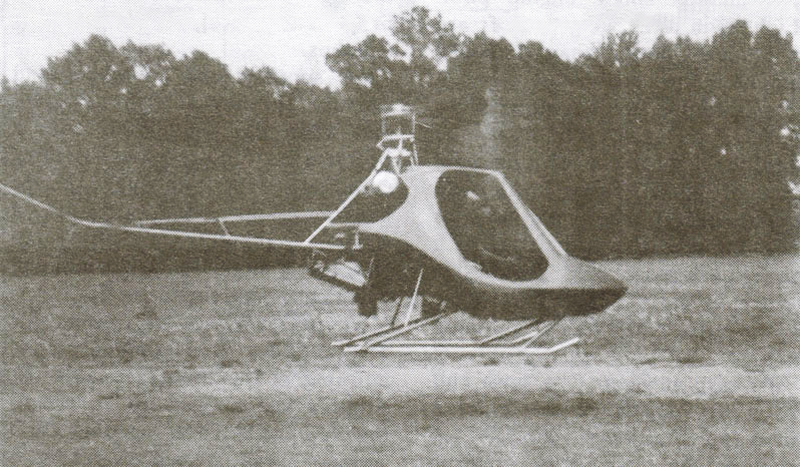 The Subaru helicopters oil system was modified by building an oil pan with a lower sump and building the oil pump pick up tube to go to the bottom of the new sump. For the oil to drain to the new sump, two holes were drilled next to the front pulley on the engine (now at the bottom) also valve cover drains were welded in each cover to the oil pan.

The rotation on the Subaru engine was backwards compared to the original two stroke boat engine installation so the rotor system had to be reversed with new rotor blade straps being made for the change. The tail rotor was reversed by undoing the pitch links and rotating the blades 180° (degrees).

To sum it up, the helicopter did fly but power wasn’t so good. The engine was advertised as putting out 80hp but was probably closer to a more realistic 60hp. We ran it at 4500rpm then tried it at 5000rpm with little improvement. I then ported the engine and raised the compression and finally got it to fly with only marginal power reserves. (Editor: new technology allows us to see over 100HP currently) 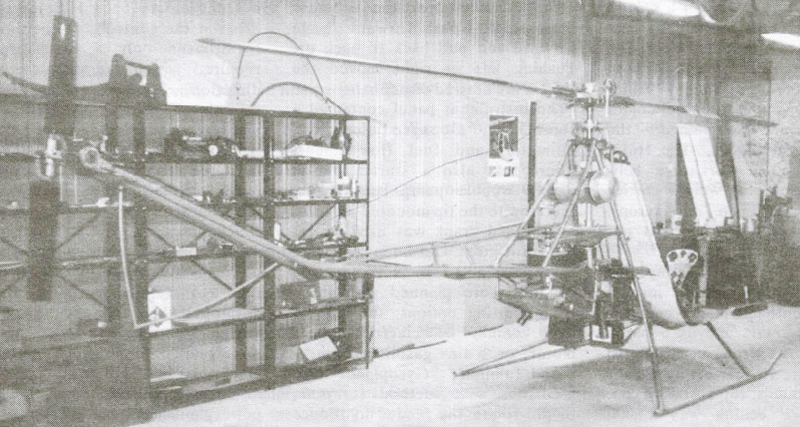 Editors note: In the early 90’s the EA81’s power potential hadn’t yet been realised. Through further experimentation over the next few years it was discovered that significant horsepower gains could be made through improved understanding of the engines ability.

There were a few auto engine aero conversion companies that were able to extract around 115 to 120 hp reliably from the EA81 in normally aspirated configurations with some pricey custom modifications. Had these been incorporated to this particular helicopter it could have become a popular conversion option re-birthing the old Scorpion helicopter to a whole new generation.

Those engine options were obtained without even considering turbo charging which Doug Schwochert later discovered as a solution to the lack of power issue. Unfortunately the stock turbo engine wasn’t matched well to the engines output potential. Custom EA81 turbo charged engines have been able to deliver around 140 hp built correctly. Now though, the EA81 is over 40 years old and far and few between in the junk yards. 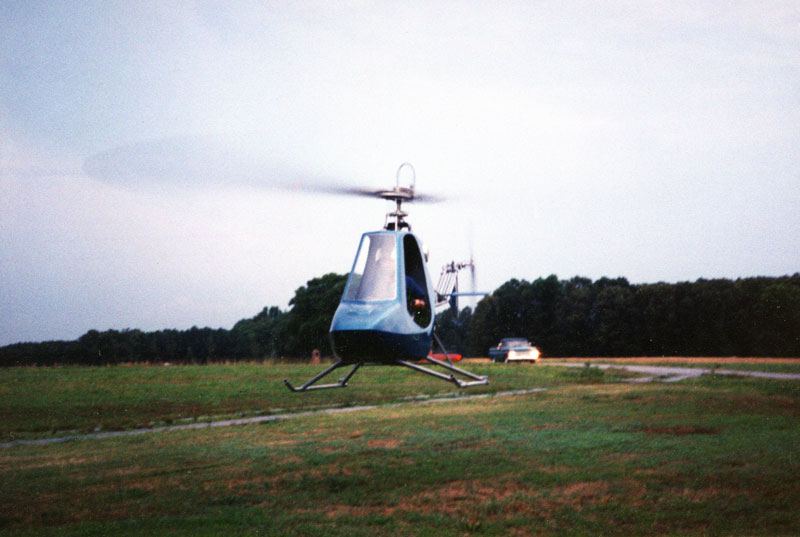 Mr. Froburg has flown the ship through transitional into forward flight up to a cruise of about 40 mph. At the time of his latest report no major problems had been encountered with testing progressing positively.

It could just be a “fluke” and Ron recommend that he install another engine and give it a go. Unfortunately persisting with research and development is the only way to get these answers! Only time will tell if the little EA81 will be a reliable power plant for light homebuilt helicopters.

Editors note: It is unknown where this helicopter is located today and no further information has surfaced. It is interesting to note though that many helicopters now use later versions of the Subaru engine both as experimental helicopters and kit helicopters. There have even been quite a few Scorpion Two helicopters re-powered using Subaru auto conversions.

EDITOR: The EA81 is a fantastic choice for a small single seat helicopter. Unfortunately the knowledge and technology on how to extract the most horsepower out of this engine came a little too late. These engines were produced in the early 70’s and no longer common in your average wrecking yard. Also some parts – especially “heads” are nearly non-existent as spares. Still we have seen them installed on the MC1 helicopter, the Scorpion 1 helicopter and a number of Asian homebuilt helicopters including coaxial designs.

PLEASE NOTE: Ron Froburg no longer has this helicopter or offers support for the Scorpion 1 Helicopter Subaru Engine Modifications. All information is © copyright protected.