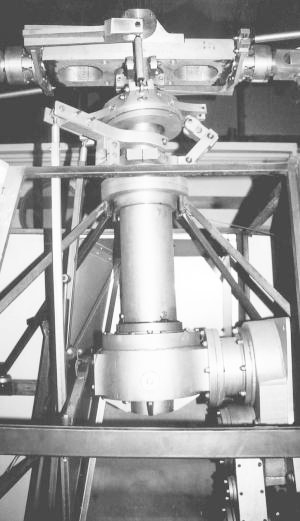 Roger Erickson wanted to fly a helicopter but there was no way he could justify the cost of buying one. So, being a do-it-yourselfer, he decided to build one himself – the Cheetah helicopter. Fifteen years later, his machine is nearly ready to fly and he now has a foundry, a really good steel lathe, a gear machine, and a good milling machine.

He built virtually every part of the chopper himself, which is as unique as he is. “It’s my own design and there’s nothing like it anywhere,” says Erickson. “It weighs about 1,200 lbs., is powered by a Chevy 350 cu. in., 300 hp engine, and should lift about 3,500 lbs.” Erickson says “should” because he won’t really know until he gets the home-built helicopter out of his machine shop and up into the air. He can’t ask an engineer to go over his plans and schematics, because there aren’t any.

The plans are in his head, and every piece was put together through trial and error. “The frame was shortened or lengthened three times to get the right center point,” says Erickson. “Weight and balance are crucial on a helicopter. Everything has to hang from that center point.” Erickson began by reading books, looking at helicopter plans and, with the help of a friend who is a really good mathematician, figuring out what he needed to do. 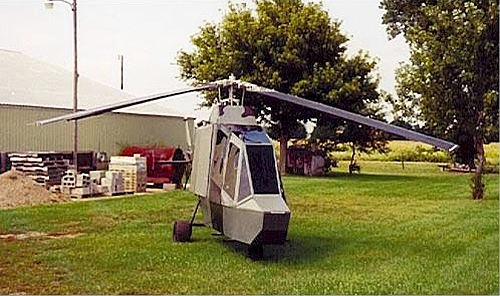 The first step was to decide on a V-8 engine. He knew he didn’t just want a helicopter to fly. He wanted one with enough power to pick up a “wounded motorcycle or snowmobile and my buddy and fly them home.” Once the engine was selected, all the gear ratios had to be designed around its weight and what he wanted the gears to do. “We need 4,000 rpm’s in one spot, 2,500 in another, and 500 in a third,” says Erickson. “Everything had to be designed and built to deliver what was needed.”

The only gear case he didn’t build was the one for the tail rotor. The main gearbox is chain driven by a chain from a 4-WD transfer case. He needed to build a Sprague clutch into the drive system, so if the engine stops, the main rotor will spin freely as the helicopter falls out of the sky. As he explains, if the motor fails, helicopters need to drop straight down and fast so the rotors continue to turn fast.

If they don’t spin, they will fold up and break off. If they spin fast enough, just before the chopper hits the ground, the pilot can adjust the pitch. The fast spinning rotors will catch the air, stop the fall, and lift the Cheetah helicopter enough for it to settle on the ground without damage. “A perfectly balanced machine should be able to climb 1,000 ft., shut down the motor, fall nearly to the ground, land, start up the engine, and climb back into the air,” says Erickson.

He’s confident that after spending every weekend and more than a few weekdays on his helicopter, it’s perfectly balanced. “It’s at the point where either it will fly or make horribly expensive noises.” To build the parts he needed, Erickson had to set up a forge to melt metal to cast his own parts. He built the furnace out of a piece of pipe and refractory cement. He bought the first of several lathes to turn bearings and other metal parts. 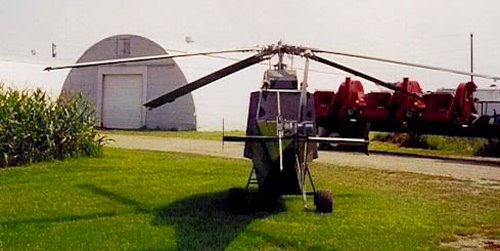 He also bought a gear machine to grind down the teeth at multiple angles on the various gears and a milling machine to mill down various pieces of metal to the 0.0005 of an inch specifications that everything needed to meet. Over the course of the 15 years, he has learned how to operate these and other machines. An experienced fixed wing pilot, he is proficient at building propeller speed reduction units (PSRU), which he does under the company name Alternative Power.

The PSRU’s are used for installing Chevy V-8 car engines in experimental aircraft. He has also gotten into the business of casting and milling parts for a wide variety of projects from popcorn machines to farm machinery to artwork. He built his own Cheetah helicopter main rotors, too. They’re made out of wood laminate with shear strength equal to aluminum. “There are no hydraulics or electronics in this helicopter,” says Erickson. “That would just complicate it. I used rods and wires for mechanical control.”

While it wouldn’t be possible to detail every step of the building process, the end results are impressive. The Erickson helicopter is 30 ft. long and has a 26-ft. dia. rotor. The cockpit is an inch narrower than a Cobra attack helicopter and has room for a passenger seat directly behind the pilot. “The cockpit is small; its size is derived from the space I could give it in the shop,” he says.

At the time of this interview, Erickson estimated that he was within a few weeks of taking his Cheetah helicopter’s first test flight. If all goes well, he might start building them for sale. “I think I could make one at a sensible cost now, and probably put it in the air for well under $100,000 compared to $200,000 for a new two seater with less than 200 hp,” says Erickson, who promised to send photos to FARM SHOW of the helicopter’s first flight.

IMAGES: Stingrays list of rotorcraft – though we cannot confirm this article and the images are in fact the same craft, it was based on our research of all known homebuilt rotorcraft.

Be the first to comment on "Made It Myself Cheetah Helicopter"