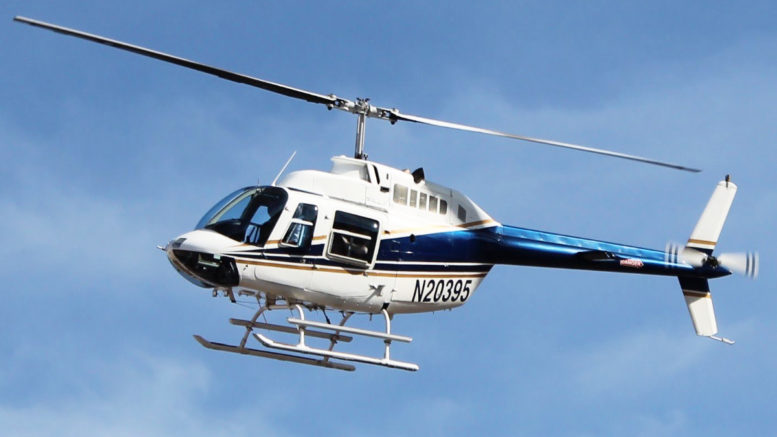 IT STARTED THE TURBINE REVOLUTION AND HAS LED THE WAY EVER SINCE.

After living for years under the shadow of Italian cars, Scottish locomotives and Russian ferryboats as art forms, America finally came up with the Bell JetRanger, which outshines them all. Almost single-handedly, this little helicopter elevated rotary-wing aviation above the utility truck business.

It captivated executives and air taxi passengers, and in one fell swoop made helicopters not only respectable, but desirable. When it appeared six years ago, after an unbelievably ugly forerunner had flopped in military competition against the Hughes, it was Medusa transformed into Raquel Welch.

With a quantum jump, the JetRanger took the turbine engine out of the nearly exclusive province of the military, rammed piston-engine cruising speeds clear through the ceiling and gave passengers a deluxe-looking aerial limousine that made them feel like something better than military couriers and forest fire rangers. 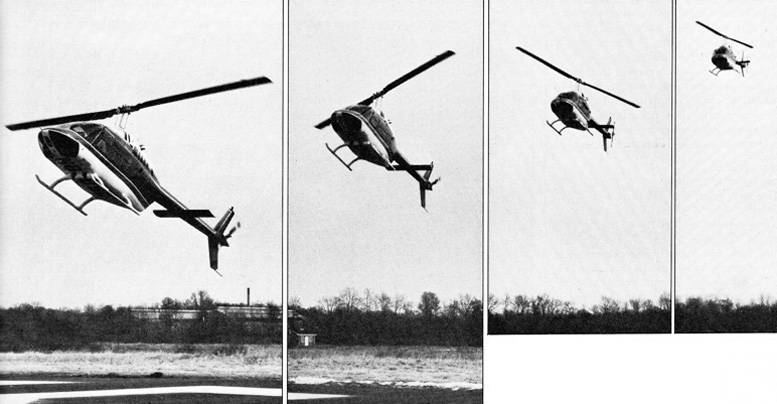 Sequence of an autorotation at 60 mph, with the flare and level-out for landing. The approach path is fairly shallow, with plenty of inertia in the rotor blades at the bottom of the run for a gentle touchdown. The aircraft is out of Atlantic Aviation from Teterboro, New Jersey. 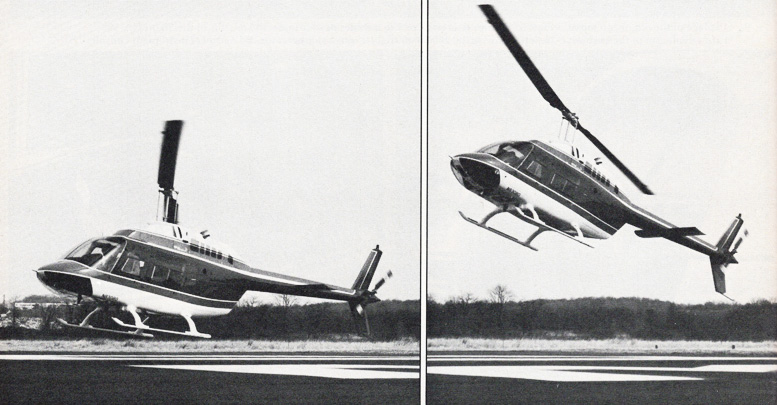 At first, all was not sunshine and roses. The little Allison 250 turbine powerplant developed problems that haunted the helicopter. “Blue Ribbon” fixes, as Allison called them, came hot and heavy. But now, with the arrival of the latest 400-shp C20 version, operators and pilots see peace and tranquiliy ahead on the engine scene.

Even though it is flat-rated, because only 317 of those 400 horses can be used by the airframe, the engine still has that extra 83 shp to draw from when higher density altitudes begin to sap power. By comparison, the predecessor C18 engine had only 317 shp to begin with.

The result now is a mature helicopter design that can carry full fuel and five passengers, and still have enough payload left over to handle 250 pounds of baggage, plus almost 80 pounds of instruments and accessories.

There is one small qualification to this: the middle rear seat in the JetRanger is directly behind a column that barely allows room for a rider’s feet, and it is directly under a ceiling bulge that allows enough headroom for only a child or small woman. Considered as a four-man helicopter, then, at least this allows another 170 pounds for accessories.

The four passengers (one a pilot) who do go along will be very pleasantly accommodated, as we discovered in a model out of Atlantic Aviation in Teterboro, New Jersey, demonstrated by Tuck Middlebrook.

Stepping in and out is accomplished without acrobatics, and the sweep of the blades is high enough to eliminate ducking. Once inside, there’s lots of leg and elbow room, and big, wide windows that offer a fine sense of spaciousness.

The sound level in the cabin at cruise (we measured it with a decibel meter) is comparable to and perhaps a bit better than most general-aviation fixed-wing aircraft. We’d describe the vibration level as fairly light to moderate.

The pilot taking the controls of the JetRanger for the first time will find out soon that he’s handling a thoroughbred — with fine, quick response, and maybe a tiny bit of impetuosity to add to the challenge.

At first, the tendency may be to over-control slightly, since the cyclic, aided by hydraulic boost, is quite sensitive laterally. Rudder control feels comfortable on the new models, especially since what some felt was an oversensitive power boost has been removed. 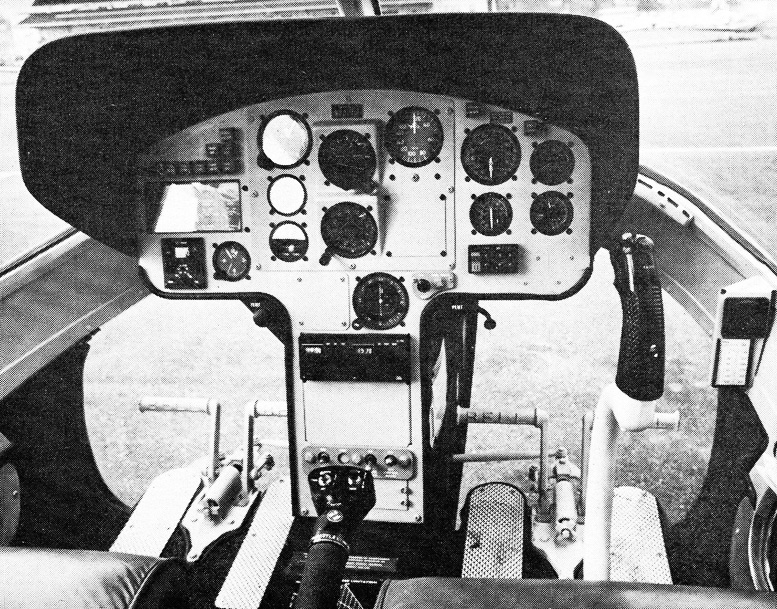 Some pilots say the large glareshield restricts visibility in an autorotation.

Climbout at gross is supposed to be 1,260 fpm in standard conditions, but with full fuel and three aboard, we managed 2,300 fpm at 55 mph on a cool winter day. With a good chunk of collective, the JetRanger II hit 142 mph true at 800 feet of altitude.

A more comfortable, normal cruise worked out to 134 mph, although some operators say they normally limit cruise speeds to about 120 for smoothness and diminished strain, and that’s the speed at which the angled vertical stabilizer on the tail boom takes over to eliminate power drain from the tail rotor.

Take your hand off the cyclic in cruise, and the bird will begin a slow roll to the right. Stability augmentation is an option in this aircraft, for an extra $15,900. Coming in for the first approach, anyone used to slower rotorcraft might be excused for a tendency to overshoot this slippery machine, but 60 mph cuts down on blade slap.

In autorotations, the jetRanger exhibits a fairly decent glide angle — ours worked out to about 2,000 fpm at 55 to 60 mph. And at the bottom there’s enough blade inertia left to keep squeezing up collective all day. Hovering autorotations are especially docile phenomena. 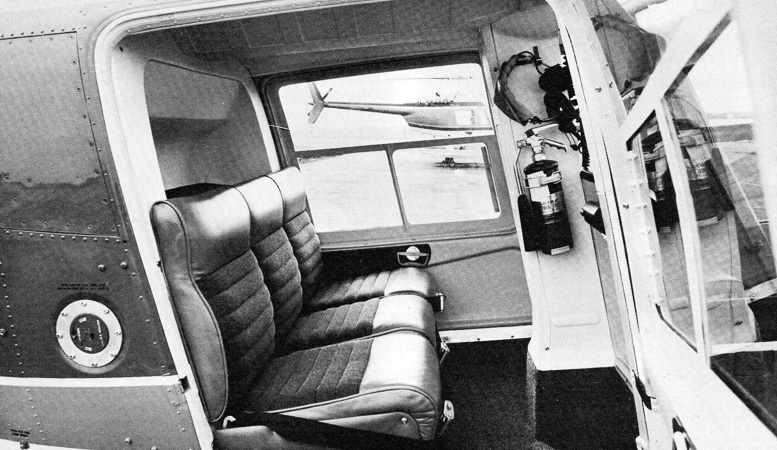 The back seats take two with good comfort and visibility. Middle seat has limited head and foot room.

One small complaint voiced by some pilots concerning autorotations had nothing to do with aerodynamics, but with the new instrument panel glare shield. They said it was so large it obscured their vision on the flare during autorotations.

Although we encountered no turbulence, pilots we talked to say the JetRanger handles it pretty well, without some of the uncomfortable rearboom twitchiness characteristic of other, shorter-coupled helicopters. In the longevity department, the Allison C20 at this point is listed for a 1,000-hour TBO, which is not exactly spectacular for a turbine engine, but which can be expected to improve.

Of the 15 items on the aircraft given limited lifetimes, most are rated at 4,800 hours. The main rotor blades are tagged at 2,400 hours, while the shortest lifetimes go to the tail rotor blade and swashplate bearing, at 1,200 flight hours.

This price range puts the jetRanger above the Hughes 500 and Fairchild Hiller 1100, but well below the five-place Vought Gazelle and Boeing-Bolkow BO-105C. Atlantic Aviation in the northeast is the only designated dealer for the JetRanger. The rest of the country is served from the factory in Fort Worth.

The jetRanger’s line of conversions and accessories includes a medical litter configuration, pop-out floats for over-water operations, a cargo hook and an engine intake particle separator that acts as an ingestion filter. 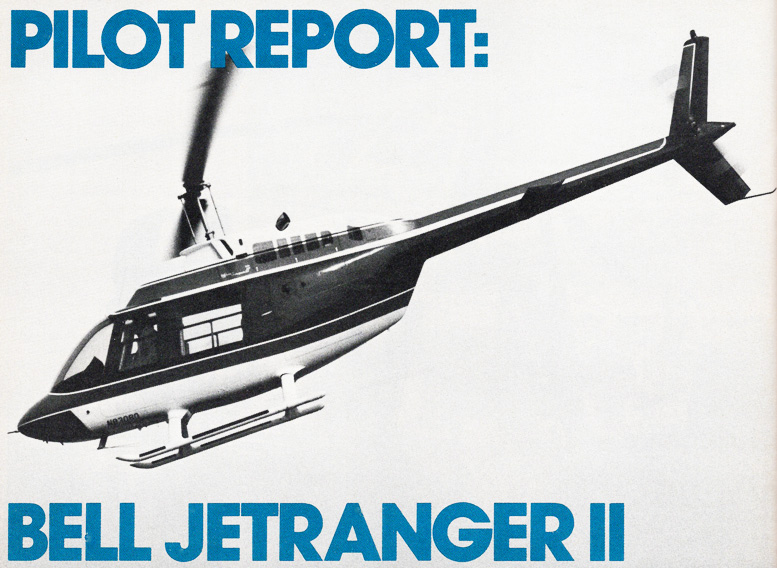 ASK THE MAN WHO FLIES ONE

“Basically this is what Bell promised us when the C18 came out. N o w it’s finally here. I’d say the JetRanger, with a properly balanced rotor system, is probably one of the best helicopters available today. The JetRanger is another percentage smoother in gusty air—all Bell equipment is, because of the heavier blades, and bigger tail boom surface.”

“As far as all-around comfort, the JetRanger is, I think, really, really good. Sound level is very acceptable—you can talk to your people without a headset. The JetRanger has always been more expensive and always will be. It starts off more expensive, and even the maintenance on it is higher.”

“It’s a comfortable, maneuverable helicopter and relatively fast. It’s also a typical Bell autorotating machine. You’ve got good pitch at the bottom, and a good glide ratio. For some reason the heaters in this aircraft are the poorest I’ve ever seen—we’ve solved the problem by doing preventive maintenance on them every six to eight hours.”

“It’s definitely not a forgiving helicopter, with the C l 8 engine, because normally it’s temperature-limited as opposed to torque-limited—which means that you can just keep pulling, and the machine will lift it, but eventually you’ll just burn up that engine . It’s a good-flying helicopter—it’s a working machine—the customers like it—it’s pretty looking.”

“The n ew engine is working out fantastic. The A Model was quite underpowered, especially at high density altitudes. We’re always above 5,000 feet, and the altitude performance n ow is much closer to what it should be for a machine in that price category.”

“As a pilot, I was a little afraid of the C18 engine because of the temperature problem on a hot day, and the possibility of over-temping it. As for maintenance, we haven’t had any problems with it at all. The heater’s pretty good. It doesn’t keep you toasty, but it’s pretty comfortable.” 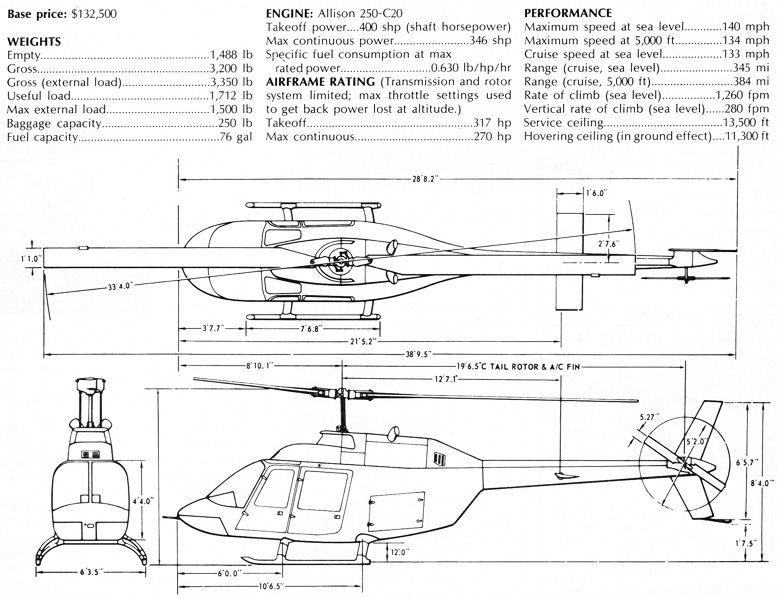 Be the first to comment on "Pilot Report: Bell JetRanger 2 Helicopter"