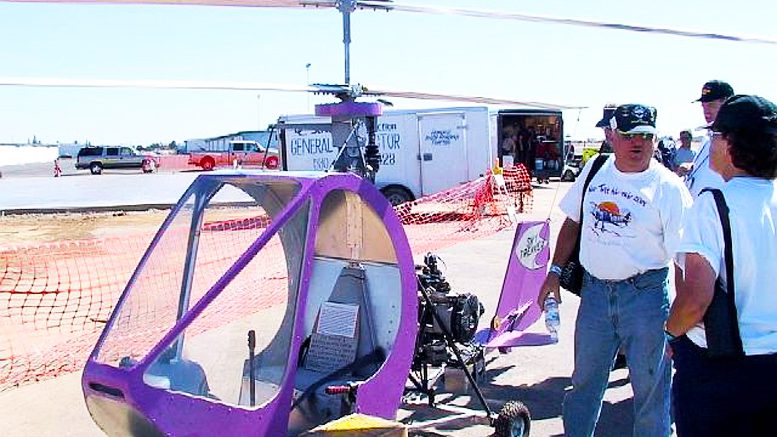 A simple, safe, easy to fly, single place helicopter is almost a reality, the Sky Trekker’s performance should exceed any other small helicopter.

Testing has been started by Gene Phebus who will modify any weakness and will manufacture the helicopter parts or possibly kits of the machine for homebuilders.

It now has the vertically mounted Suzuki Sprint engine, turbo charged with electronic fuel injection and emission control, which will adjust automatically for elevation and other conditions.

In my attempt to simplify the Sky Trekker helicopter, reduce empty weight and increase performance, I re-designed the counter rotating gear case, using the gears from a Chevy Eton rear-end, called spider gears. The next step was to incorporate the reduction drive on the counter rotating gear case. Also, including a cog belt clutch and belt for a more positive transfer of power and to stop the slippage from the use of a “V” or flat belt. 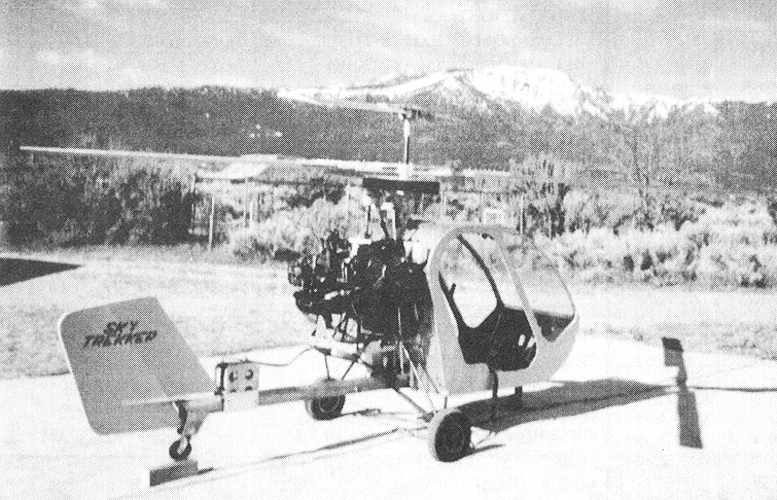 With these changes, I reduced the weight of the helicopter by approximately 70 pounds, simplified it by 75% and increased the performance by 25%.

I think the coaxial helicopter will find its place in the home built personal helicopter category in the near future. 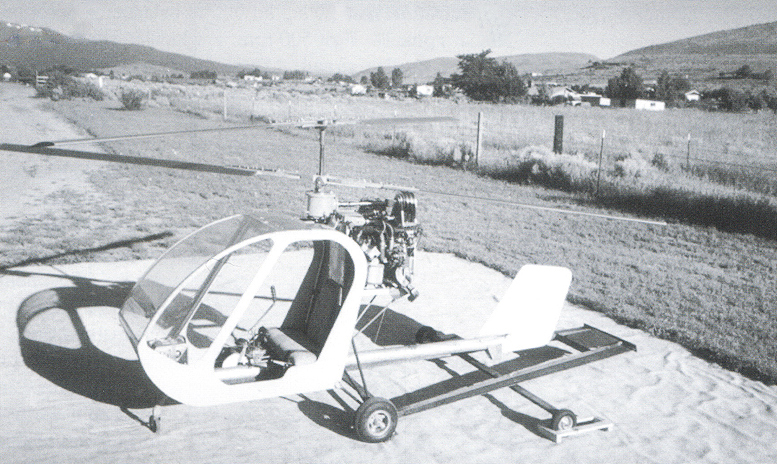 On June 30, 1998, Sky Trekker lifted 790 pounds in ground effect on the test stand I designed. This was at 4,100 feet elevation with temperatures in the sixty-degree range. Since my previous article (Rotorcraft, October ’97), I have made many changes in Sky Trekker 1.

First, I installed an ’87 Chevy Sprint Suzuki engine because of its superior torque. It is turbocharged with fuel injection and is rated at 107 foot rpm with 70 horsepower at 5,100 rpm. It fit easily into the machine and provides a low weight/torque power ratio.

My goal is to lift 850 pounds at this altitude, which I believe is achievable with fine tuning. Additionally, I changed the rotor blade design to two 16-foot rotors with eight-inch chord and NACA 8-H12 asymmetrical-type blades.

The test stand I designed is proving to be quite helpful. It allows me to lift the machine off the ground while I become acquainted with my control system. It rolls around in any direction and can be used as training wheels. The stand does limit how high I can fly, which serves as a safe guard for me as I gain confidence and mastery.

As I put time on the machinery learning to fly, I will gather data and put together a book on why and how things work. There will be specifications dealing with every part of the machine and how these perform in flight.

Up to this point, I have found very little information on the small coaxial helicopter, so I have had to figure things out for myself through trial and error. I am willing to share what I have learned, hoping it will stimulate others to build coaxial helicopters.

To date, I have been working on the Sky Trekker project a total of four years. I have enjoyed successes and experienced failures, but in all, have found it to be rewarding.

I plan to keep on trying to improve the coaxial concept and have some ideas in mind for future projects. One of these involves a twin engine model for added safety to vertical flight in small helicopters. Sky Trekker II is building itself in my mind.